The Portland, Oregon metro area has a lot to offer. A 90 minute drive west brings you to the beach. In the opposite direction there's a snow-capped mountain. It has a thriving food and wine scene, a burgeoning tech sector, and temperate weather. An increasing number of people would like to move to this metro area. Perhaps the greatest concern for these new residents is finding housing. Data can help.

Records for house sales on redfin.com over the past three years in the neighboring cities of Portland, OR and Vancouver, WA were scraped by using the Python packages BeautifulSoup and Selenium. Around 20,000 sold house records with 15 variables are extracted, including zipcode, address, location, selling price, days on redfin, beds and baths, size, price per sqft, and etc.  The public school ratings were gathered by scraping the website greatschools.org according to zip code. A screenshot is below. 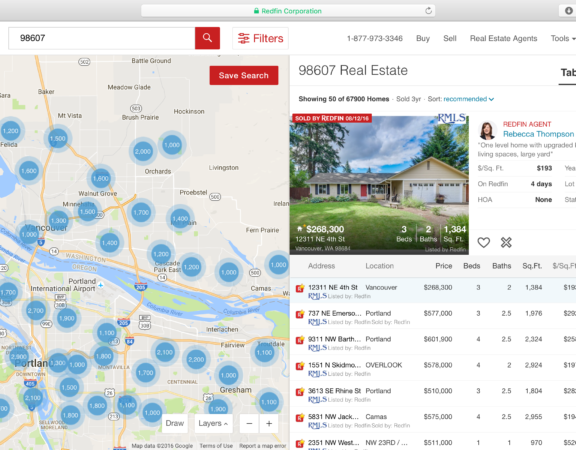 We see that in the Portland metro area the median house price per square foot increased 35% from Aug 2013 to Aug 2016.  However, the house transaction volume was increasing during the past three years. 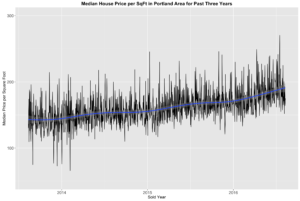 The house transaction volume is strongly seasonally dependent - it is highest in summer and lowest in winter. The new school year starts in September, so the real estate market is influenced by people looking to move within a desirable school district. Since offers need one or two months to be processed, the data shown here is delayed. Agreements for house sales usually happen in the Spring. Therefore, this is the hottest season for real estate market. 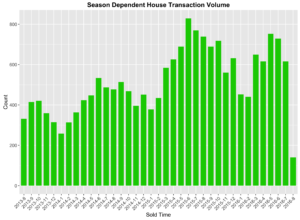 2). Where are the best locations?

Vancouver, WA and Portland, OR are the twin cities in the metro area. However, which of these is the best place to live?  In general, the living cost in Portland is more expensive than Vancouver as shown in the boxplot. The red boxes show the price of each zip code area in Portland and the green boxes show those in Vancouver. In seven out of ten zip code areas in Portland the median price per unit area is above $200/sqft. The median price per unit in all the areas of Vancouver is lower. 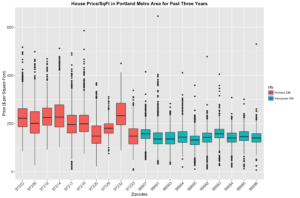 3). Which area has significant appreciation?

During the past three years, the price growth rate per unit area demonstrates the potential appreciation capability. The top 10 zip codes are in Portland and the bottom 10 zip codes are in Vancouver. In this regard, some areas in Portland, such as 97202,97206,97220, have gradually increasing house prices. Buying a house in these areas would conceivably be more rewarding in the long run. In comparison, the price appreciation in Vancouver is relatively weak. 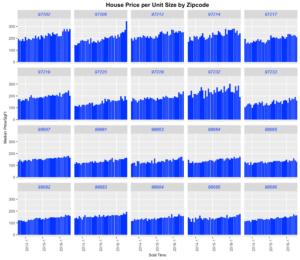 4). Are the public schools good? 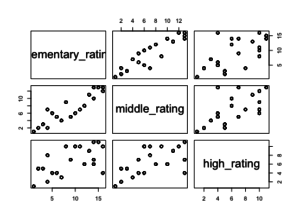 As shown in the plots, the housing cost in Portland is higher than that in Vancouver for the same education quality. Also, as school ratings increase, so do house prices. 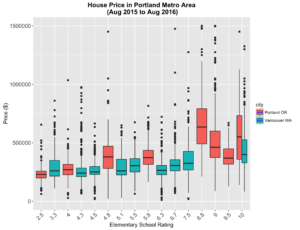 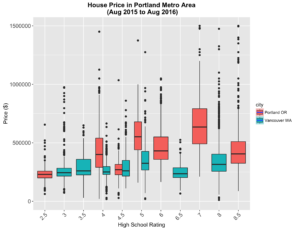 Now you know when and where to narrow your target for house hunting based on price, location, and school district. What specific features do you care about in a house? The following plot shows the correlation relationships among those numerical features. As previously explained, school ratings among elementary, middle, and high schools are highly correlated. The price, house size (sqft), number of bedrooms, and number of bathrooms are positively correlated. Larger houses, more bedrooms, and more bathrooms lead to higher house prices. In general, one would expect smaller houses to be cheaper than larger houses. However, when one takes into consideration the price per square foot, this relationship doesn’t really hold. 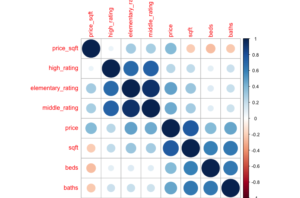 As observed, for the house in one zip code and within a short time period (August 2015 to August 2016),  house price is positively correlated with house size (sqft). However, the price per unit square foot shows a complex trend. When the size is less than 2000-sqft, the price per unit square foot drops. It is constant from 2000 to 5000-sqft until it slightly decreases after 5000-sqft. Therefore, buying a house smaller than 2000-sqft means you pay more for each square foot. The combination of house price and house size should be optimized before submitting an offer. 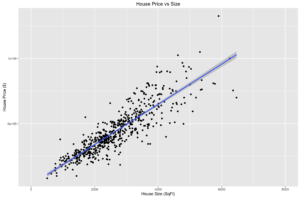 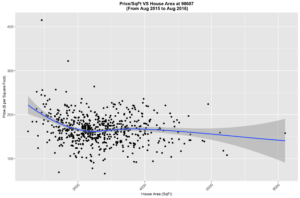 As we see, the analyses of housing historical records are able to help residents find a desired house, fully with trust of data.