Is movie making primarily an art or a business? Idealistically, it's a medium to expand our mind or imagination, evoke emotions, for storytelling, for demonstrating cinematography.

However, does the movie content matter if it makes a profit, if it attracts a crowd to the movie theatres?

At the end of the day, it is still a business, and if audiences go to watch movies that are not "artistic", or if "good" movies are not profitable, unfortunately, businesses will follow the money.

So is this what is happening in real life?

Some questions that I had in mind when approaching the project were as follows:

I planned to see if I could see these relationships by digging up the top grossing films and its general finances, along with its corresponding RT critic score and user score, to visualizing these factors.

Using Scrapy, I scraped the top 100 grossing movies each year from 1989 to 2019 from "the-numbers.com". Attributes included:

Firstly, to get a lay of the land. What is the general distribution of how critics rated movies versus how users rated movies?

Plot 1 and Plot 2 below show a summary of the distribution of critic scores versus user scores.

We can see that from 2000 -2009, there was a larger spread of points from the linear regression line, which suggests that there is more deviation in Critic vs. User scores in this decade. 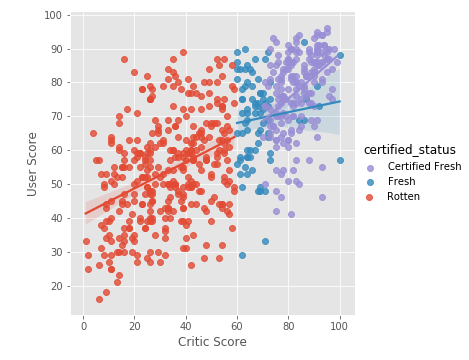 Comparing the linear regression line of movies within the "Fresh " category (blue line), we can also see that Critics and Users scores of movies in this category were much more aligned from 2010-2019. 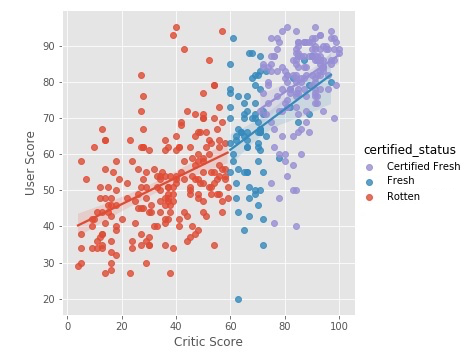 Critic-User Difference versus its performance in theatres

Where a Critic-User Difference is negative (e.g. -60), it means the User score was 60 points higher than the Critic score. 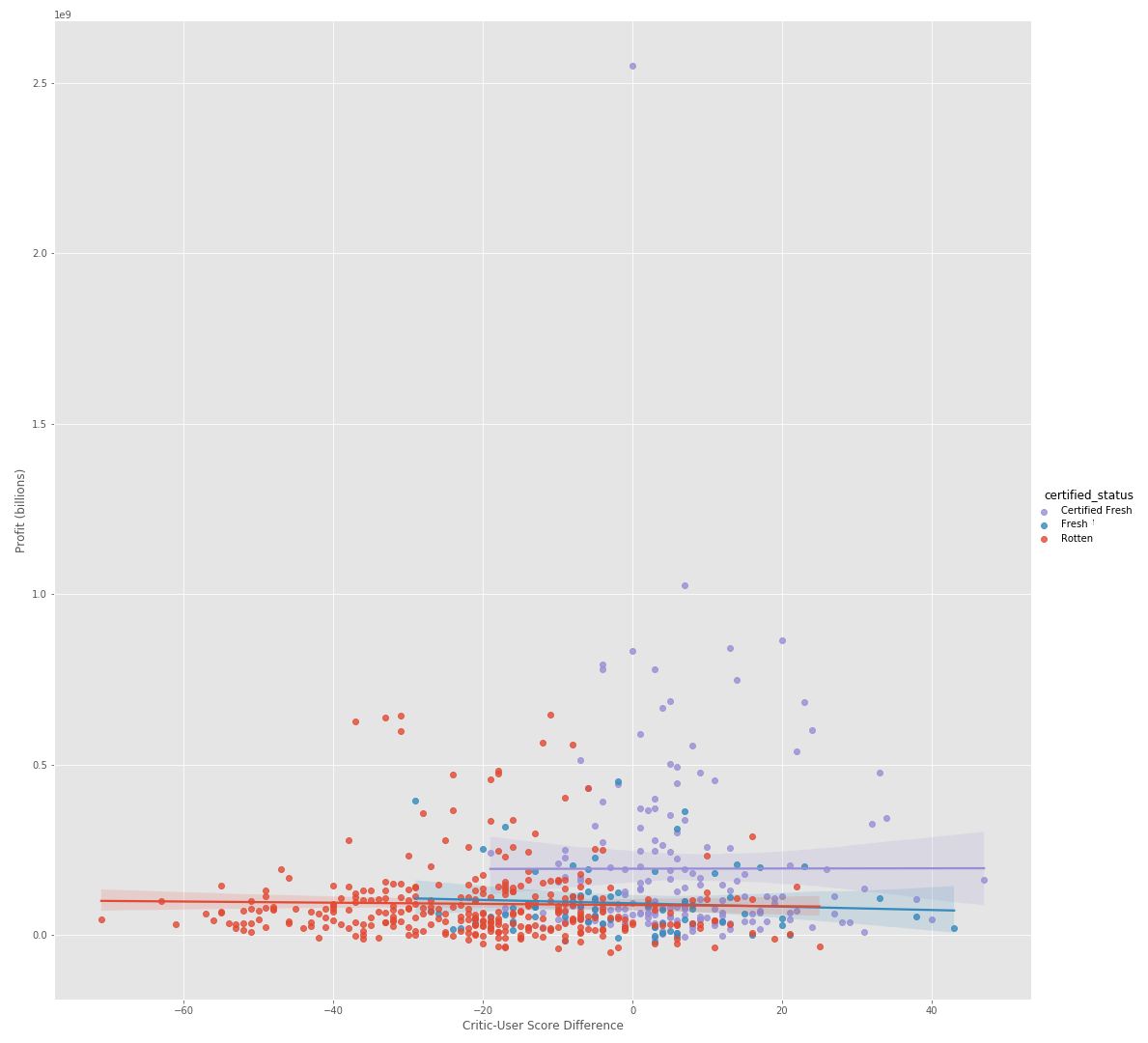 In Plot 3, we can even see that there are quite a few outliers on the right hand side where “Certified Fresh” movies are raking in quite a good profit.

In contrast to Plot 3, when looking at Plot 4 below, the linear regression curve is downward sloping as it moves along the x-axis (“Critic-User Difference”) for movies from 2010 – 2019.

There can be two factors contributing to this downward slope:

In this instance, there are more movie titles in 2010-2019 which are seeing greater profit who are on the left hand side of the graph. 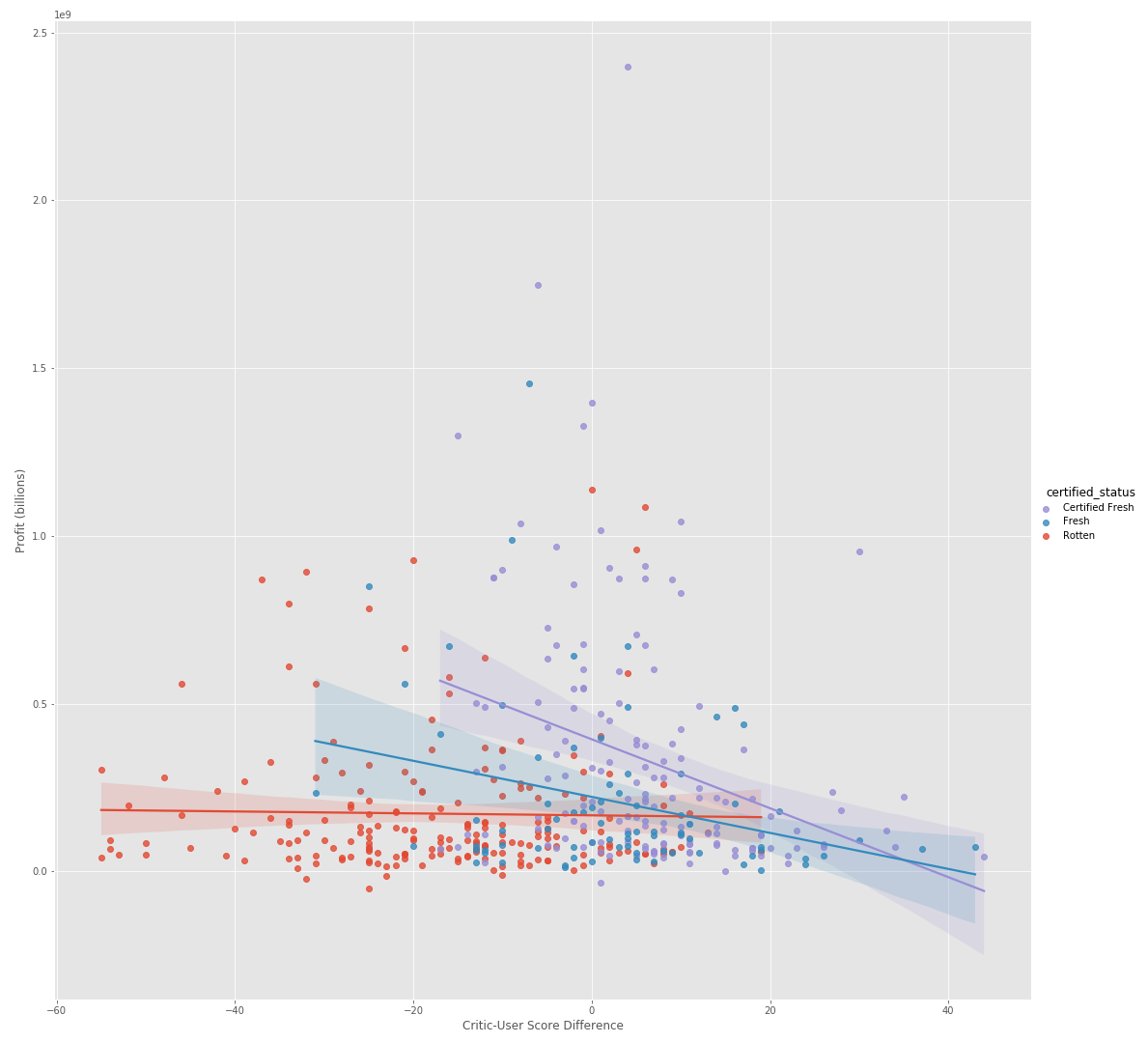 Lastly, we will look at the Critic-Users Difference in relation to its Worldwide Box Office/Production Budget ratio.

Worldwide Box Office to Production Budget ratio (“Earning Ratio”) is calculated by taking the film’s worldwide box office and dividing it by its production budget. Here, we would get a measure of how much a film is earning relative to its costs. 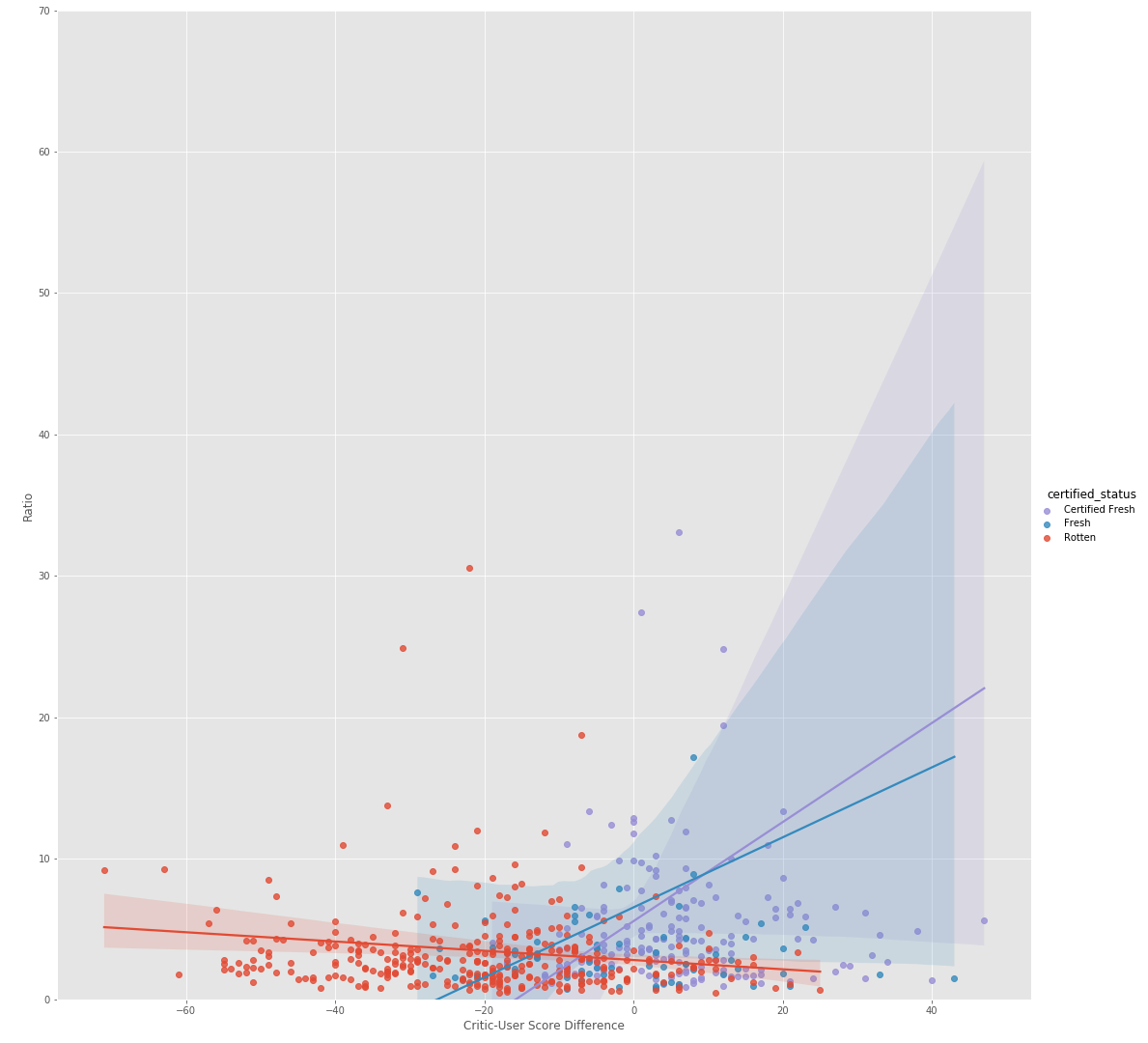 In Plot 5, we will see there is a positive relationship between a film’s rating and its Earning Ratio from 2000 to 2009. A high Critic score for the movie corresponds to a higher Earning Ratio.

It could mean that the audiences went to watch good films, and these were also movies rated as “Certified Fresh”/“Fresh” by Critics. 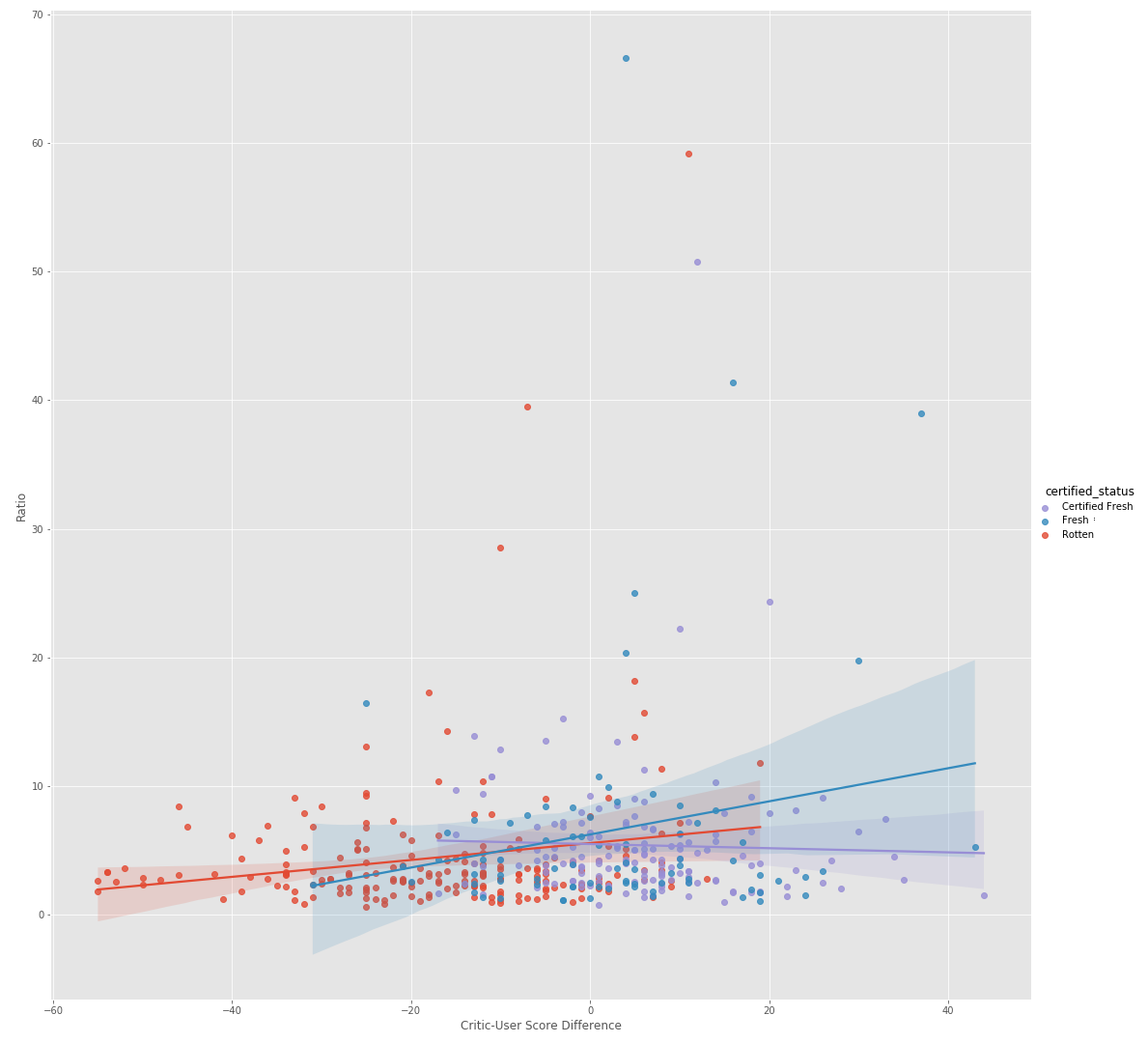 The landscape for movies seems to have changed from 2000 to 2019. Though it does look like the audience behavior seem to have changed between 2000-2009 and 2010-2019, I would want to conduct further analysis before coming to a definitive conclusion.

Given more time, I would like to perform a further deep dive to obtain a deeper understanding  of the factors driving the numbers behind the movies’ performance in theatre.

This would include a sentiment analysis on reviews of movie goers on specific films to understand what motivated them to go watch the movie, and how much marketing was conducted to promote the film. It would also be interesting to do a breakdown and analysis by movie genre or the source of the screenplay (e.g. based on a book, original screenplay, based on comic) to gain further insights on what factors are most effective in bringing audiences to the movie theatre.

Hope you enjoyed the read!

View all posts by Alexander Tin >