As I scroll through Netflix on an almost daily basis I often find myself asking how they choose what titles to feature on their site. How do they know which shows and movies will be the most addicting and leave me on the edge of my seat wanting more? There is likely a lot of thought given to what content will accrue the widest user base and the most revenue. My goal in this project is to gain further insights into the decision-making behind the content that appears on Netflix.

The main scope of my research was centered around content type, timing, and quality. For the purpose of this analysis, content-type refers to the genre, the language of the title, and whether the title is a Netflix Original. This helps answer the question of which audience the film or show is targeting. If a series is a Drama it is likely meant to be watched in bulk as the user follows the captivating plot, while if it is comedy one might watch one or two episodes to relax at the end of the day. I was also interested in determining whether Netflix was trying to grow its brand by pushing out more Original Titles.

Timing refers to when the title is released. There must be some sort of schedule for when the titles are added to the site. An analysis of the number of titles posted by dates will tell us when the 'hot' and 'cold' seasons are during the year. Another insight that can be gained from organizing the titles by their release date on Netflix is the impact that Covid-19 has had on Netflix's business plan. I would imagine that the volume of titles has increased as more people are stuck at home.

In analyzing the quality of the titles based on their IMDB scores I hope to determine whether there is a lower bound for quality on the site as well as the general quality of titles posted.

I scraped the entirety of the 'what's new' category on whats-on-netflix.com, which contained all the new releases of the past year sorted by date. The attributes I scraped for included: release date on Netflix, IMDB score, the language, genre,  whether the title was foreign or domestic, and whether it was a series or a movie. This required me to figure out how to scrap over 50 pages containing 2200 titles. 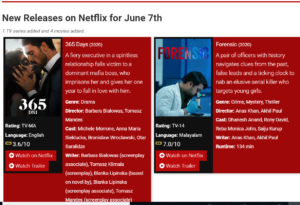 In order to determine the general quality of the films on Netflix, I plotted the distribution of the IMDB scores. This revealed a normal distribution with a median of 6.9. Very few scores fell below the range of 4 or above the range of 9. Most of the scores fell into the 6 to 8 range. This reveals that there is a minimum for quality and that the general quality of movies is good but not excellent. 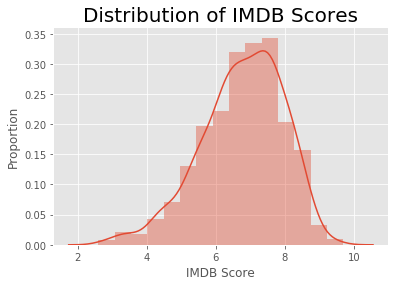 In order to determine what kinds of content Netflix was releasing and when I organized the titles by language, release month, and genre in order to gain further insight.

When I initially plotted the titles by language, unsurprisingly, English was disproportionately favored. When I filtered out the English results I saw that the 3 most popular languages were Spanish, Hindi, and Japanese by a wide margin. This makes sense given the prevalence of Spanish and the number of people in India and the size of Bollywood, but I was surprised that the European creative market was so small compared to the Japanese market. 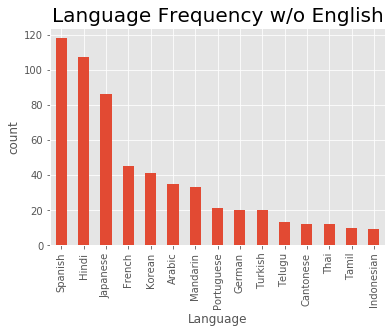 I then wanted to see what the baseline release schedule looked like this year. What I saw was a peak during June and July and an even larger peak during October and December. This indicates increased programming over the summer and holiday seasons. However, the largest peak was during the month of March. Presumably, this is in response to the Covid-19 pandemic. Due to the global quarantine, it stands to reason that consumption of Netflix would rise, so it makes sense to increase the supply of available titles. 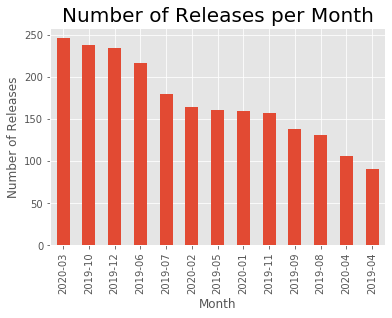 I then wanted to compare the frequency of different genres. What I found is that Drama and Comedy were the most frequent by far. This is in part due to titles having multiple genres and these categories perhaps being the most widely applicable, but it is likely also in part to their wide-scale commercial appeal. 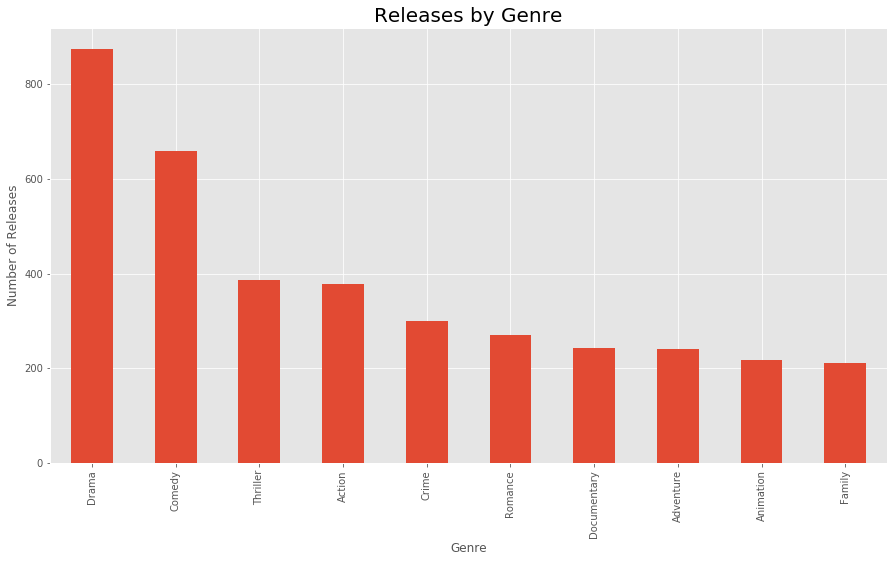 I also wanted to determine whether different attributes of the titles changed over time. I sought to learn if the frequency of different genres or Netflix Originals changed over time. What I found was that the genres of drama and comedy largely followed the monthly publishing rates, but that as the year went on there was a marked increase in Netflix Originals with the biggest spike being in the month of March. This indicates that Netflix is moving further in the direction of self-produced content. 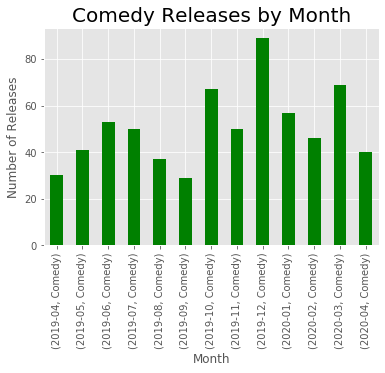 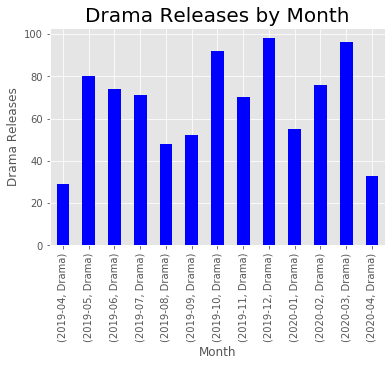 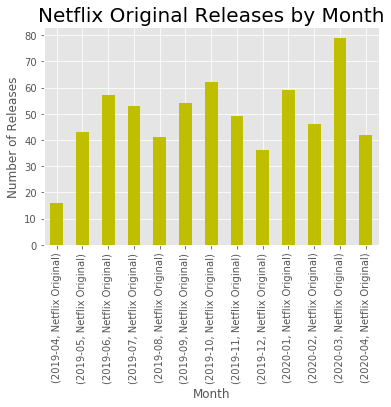 By scraping whats-on-Netflix.com and analyzing the yearly content cycle I was able to learn a few things about Netflix's strategy in terms of content. I learned that the most populous months for releases were during the winter holidays and early summer and that we were seeing a spike in content in response to Covid-19. Additionally, Netflix has been steadily increased its original content in the past year.

I also learned that the typical quality rating for movies was between 6 and 8 out of 10 on IMDB and that the most common languages besides English were Spanish, Hindi, and Japanese, indicating a strong media market in regions that speak those languages. I was disappointed to see that there had been no relative change in drama and comedy throughout the year relative to the yearly publishing schedule.

Further exploration would look into the development of different genres throughout a longer time period. We would perhaps see a rise in reality TV as time progresses as well as the development of other genres. I would also have liked to see the growth of foreign titles throughout several years as Netflix grew into the international market. In general, having a data set over a longer time period would allow for a deeper inspection of content growth.