Nike vs Adidas: Who's winning?

For my web-scraping project, I used Selenium to extract data on athletic shoes and customer reviews from Finish Line. I was interested in the topic because of the increasing trend in athleisure, where casual footwear is being incorporated into all styles of dressing. This growing demand in sneakers has created a competitive environment for major footwear brands.

I looked into Nike and Adidas for comparison because these two main brands have the most shoes merchandise on Finish Line as seen below: 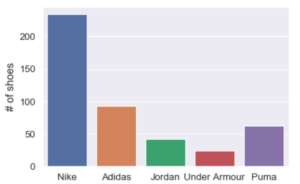 I also decided to focus my remaining comparisons on running and casual type sneakers because Nike and Adidas produced most of their athletic shoes in these categories. This data again reflects the rising popularity in athleisure because these types of shoes are worn most in athleisure.

Across the board, Nike has 2-3x more merchandise on Finish Line as compared to Adidas. Consequently, one would expect Nike to have more reviews and ratings. 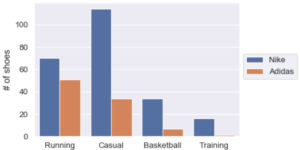 I first investigated the pricing strategy between the two brands. Adidas and Nike have similar price ranges ($50 to $250) for their running and casual shoes. Shoe pricing doesn’t have a strong correlation to the number of reviews and ratings.

Notice on the left graph, several Adidas sneakers have above 500 reviews and one with around 2500 reviews, indicating many consumers are willing to spend from $100 up to $200 for a pair of running or casual sneakers.

Reviews and ratings are the best indicators of how customers feel about products. The reviews distributions are all similar – except for Adidas’ casual sneakers. A considerable amount of shoes have around 500 or more reviews. Adidas has a strong casual shoes pipeline and a large demand for casual sneakers appear to exist.

As for ratings’ distribution, Nike has a higher variance (ranging from 3.5 to 4.5 stars) compared to Adidas’ ranging from 4 – 4.5 stars out of 5 stars. Nike’s high variance could mean that more Nike’s sneakers are either a hit-or-miss, whereas Adidas’ shoes have a more consistent quality.

Note that the data points below only include shoes with at least 20 reviews so that the distribution would not be significantly skewed based on a few people’s opinion.

Further insights can also be obtained from the actual context of reviews. A word cloud analysis was performed to determine the frequency of words used for low and high rated shoes.

The word “narrow” appears frequently in one of Nike’s low rated running shoes as shown below. From the reviews, customers find the cut to be narrower than other sneakers. Nike should ensure the designs for their sneakers have a more comfortable fit. 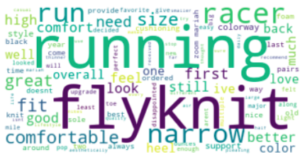 An example of a word cloud for top selling shoes with the most customer reviews is shown below. “Comfortable”, followed by “style” and “classic” are defining words that describe all top-selling shoes from Nike and Adidas. These features are of the utmost importance to consumers when choosing a pair of shoes, regardless of brand.

Additionally, when I looked at the top ten selling shoes for both brands, many of the shoes came from the same series. Both companies seem to have the same strategy in producing more models of the same series to capitalize on their popular series that already have an existing consumer base. 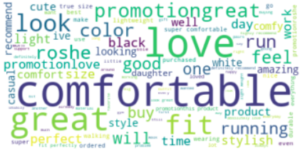 In addition to looking at text descriptions on popular shoes, I want to find out when the reviews were written, which could reflect purchasing trends and seasonality.

When I looked at one of Nike’s top selling shoes – the men Nike’s Roshe – I found that, most of the reviews were written in 2015. A closer look reveals that, most of the reviews were collected as part of a promotion (those colored in orange). The lack of reviews at other times indicates the shoes were only purchased when promoted. Finish Line’s sales strategy seems effective, but this specific pair of shoes might be over-priced since customers are only buying it during sales. 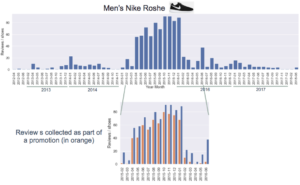 In the case of another top-selling Nike shoe – the, women’s Nike Huarache – most reviews were posted at the end of 2015 and gradually decreased through mid 2016. The promotion started mid 2016 following this decline and lasted for almost 2 years up until the beginning of 2018. Finish Line may have over-projected on the sales of Nike Huarache as a result. 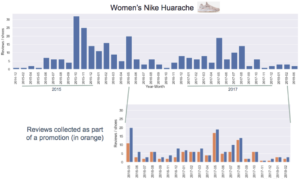 For Adidas, none of the reviews for its top shoes – ultraBOOST and Super Star – were posted during a promotion. A substantially larger number of reviews were written starting from 2017 for both top selling Adidas sneakers. The quick and successful rise of ultraBOOST and Super Star in the past two years can be attributed to celebrity and fashion girls’ endorsements. In addition to Super Star, most of the reviews were posted during June to October, which shows that people tend to buy casual street shoes during summer months as they transition from heavier winter shoes/boots. 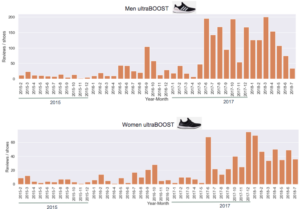 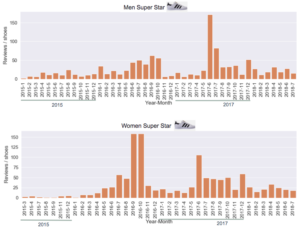 Based on the data gathered from Finish Line, I would recommend that Nike expand its casual shoes pipeline, perform quality checks on shoe width, possibly increase the price margins for running shoes series, and launch a more aggressive marketing campaign featuring famous celebrities. I would recommend Finish Line, in general, increase inventory in Adidas and decrease inventory in Nike merchandise since Adidas sales have done better than Nike’s (despite having less Adidas inventory). However, as their sales strategies do seem to be effective, they should keep them up.