Badminton is one of the most popular sports in Asian. It is officially the fastest of all racket sports. Players can hit the shuttlecock at speeds of up to 180mph (288kph) toward their opponent. But, it is not just all about speed; a player can expect to run up to four miles (6.4km) around the court during a match whilst having the agility to maintain energy-busting rallies. Since I come from a professional badminton player background. In my generation, China was the only country that dominated the world badminton community. Now I have realized there are many countries have contributed a lot of good players. I want to find out what is the reason that China has not longer dominating the badminton market, and what factors would make a good professional badminton player.

This is my first project related to web scraping and data analytics/visualization. As I come from a pro-athlete background, I've always been interested in finding what factors really make an excellent athlete, is there any relationship between countries' population or the economy? There are many sports in the world. So I decided to choose my first career sport, badminton. I used the Scrapy package to scrape the world ranking top 1000 badminton players from the official badminton organization website and supporting evidence such as world GDP and population. This is a simple introduction project and I may build this out in more depth in the future as a hobby. The pictures below are the project flow and the main website that I scraped: 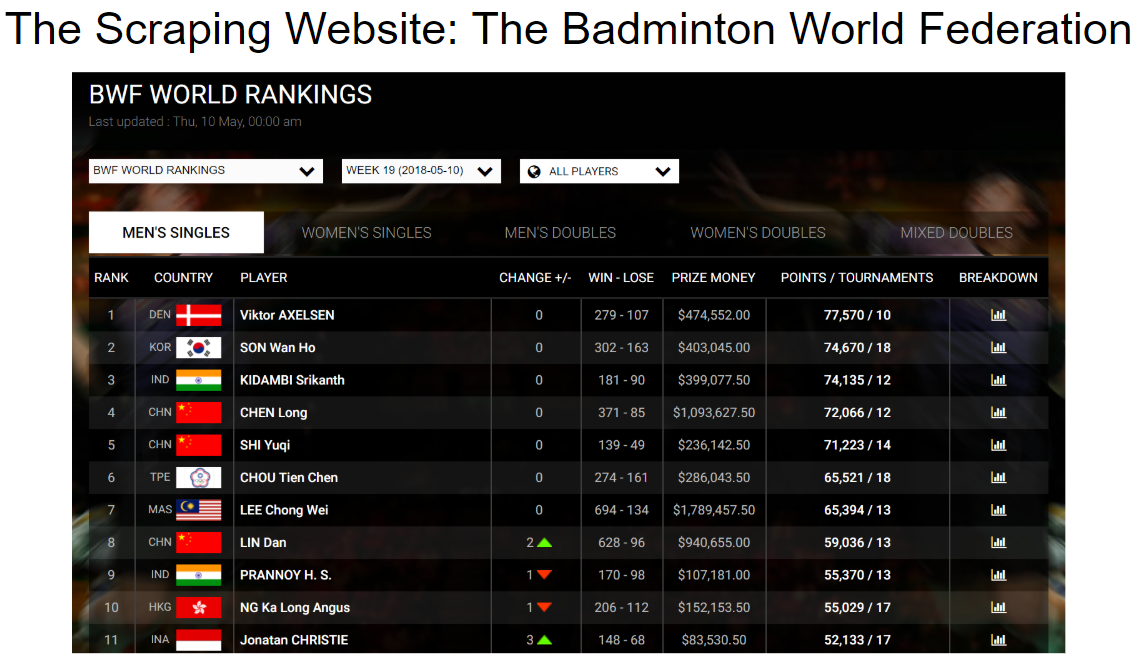 This spider scraped the first page of all players information. Then the following link will go to each individual player's page to gain more information. The main process is to focus on the fundamentals of creating a Scrapy spider and performing EDA on the data. I used Pandas, Matplotlib, and Plotly to visualize the data. I was able to resolve the questions I set out to answer using Pandas to clean and analyze the data as well as Matplotlib and Plotly to visualize the data. I created subsets of items to group players within each country together as well as world population and GDP to find if I could gain some insight into the distribution of players within each country. 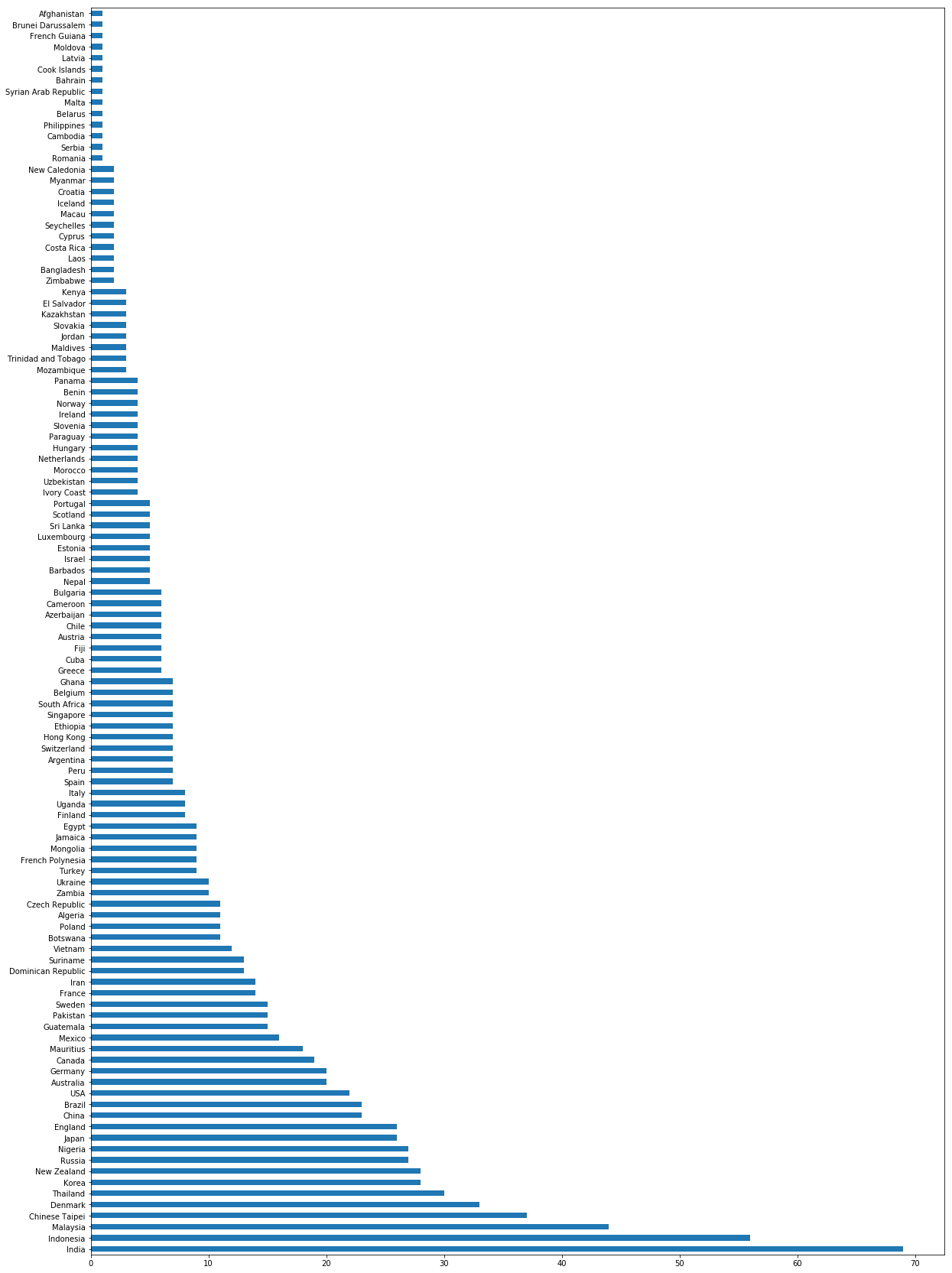 After I created the graph to visualize the distribution of the players within each country, I realized that countries have less than 10 players tend to be insufficient. Because they have a very low impact on the world badminton community. In badminton world, the world ranking top 100 players are really the key player to dominate the market. So I dropped those countries that have no impact. 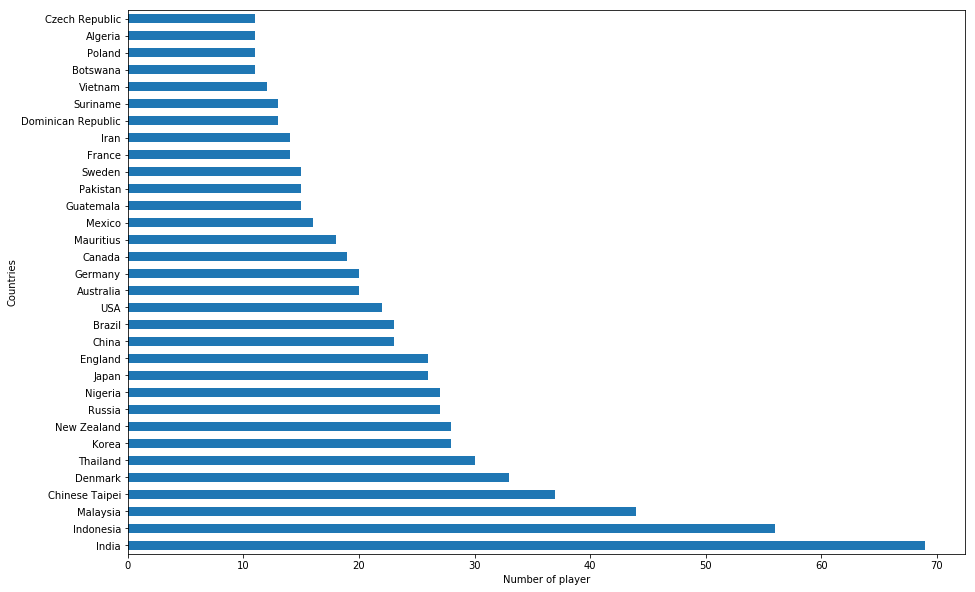 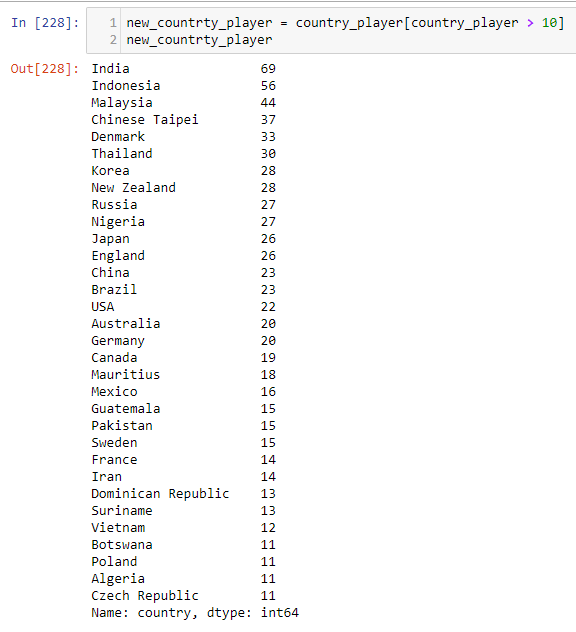 As you can see, India has the most players contributed to the badminton. Since India is the second largest population country, we can image that India has put more resource into this sport. And we see that there is the reason why China has no longer dominating. China is the largest population country in the world, but player numbers are the only 13th place. It is way behind other asian countries. If China wants to come back to the top, the country has to put more resource into this sport. 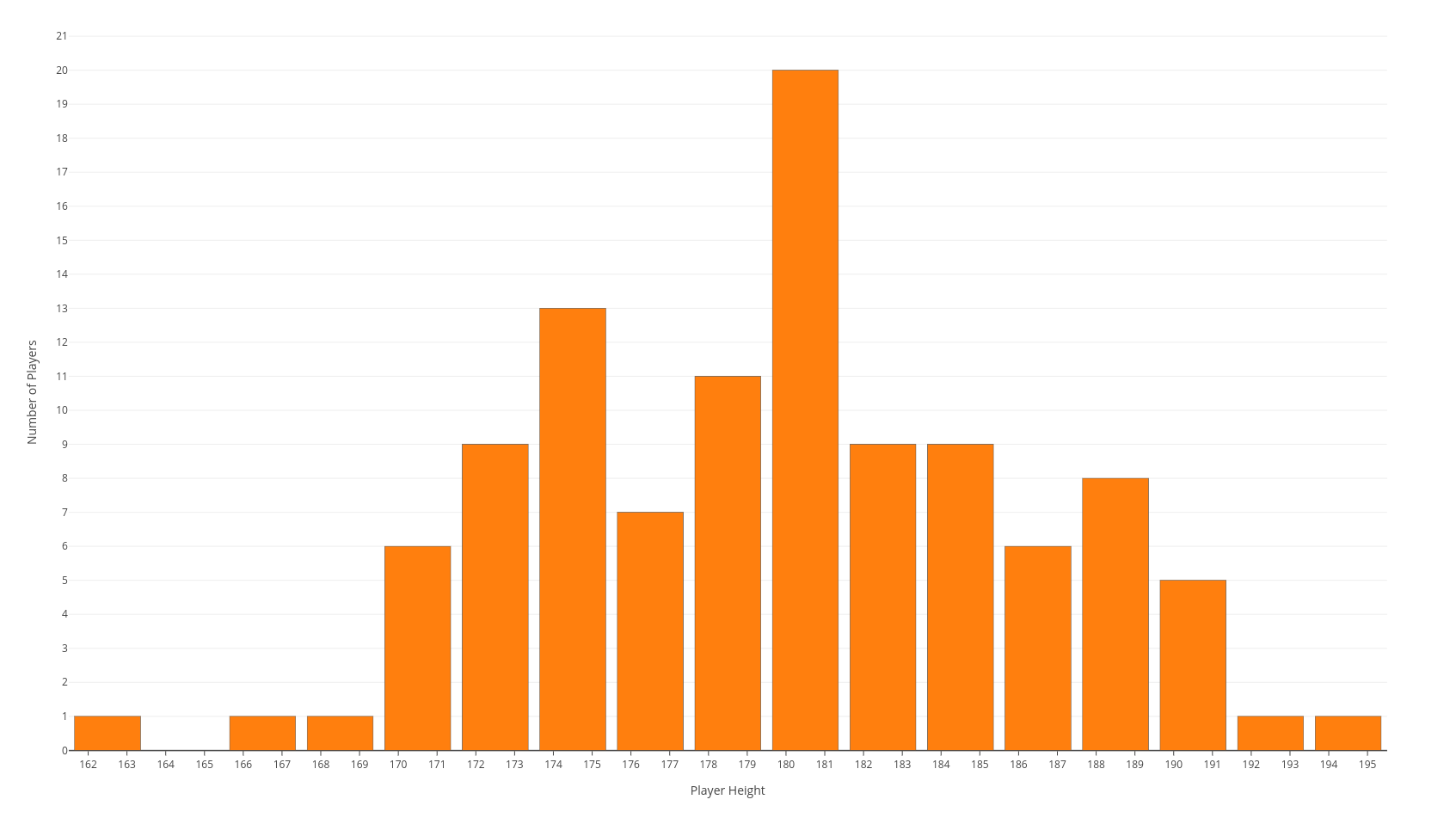 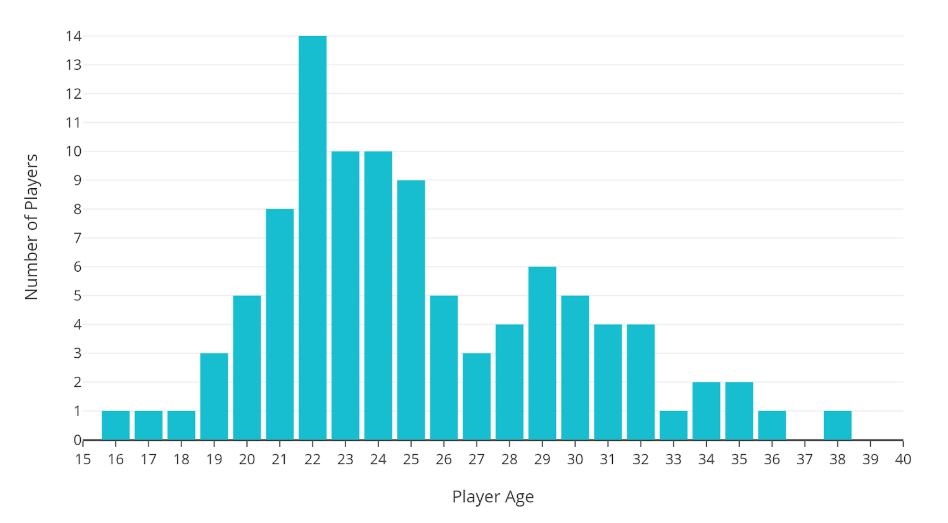 Next, I want to see if there are any correlations between GDP, population among countries. Firstly, I draw a graph within the number of players and GDP. The answer is disappointing, because even though China and U.S are the two largest GDP countries, but this is not the factor to drive the sport. However, Since India and China are the two largest population, It is hard to say that population is another factor to impact the badminton as well. 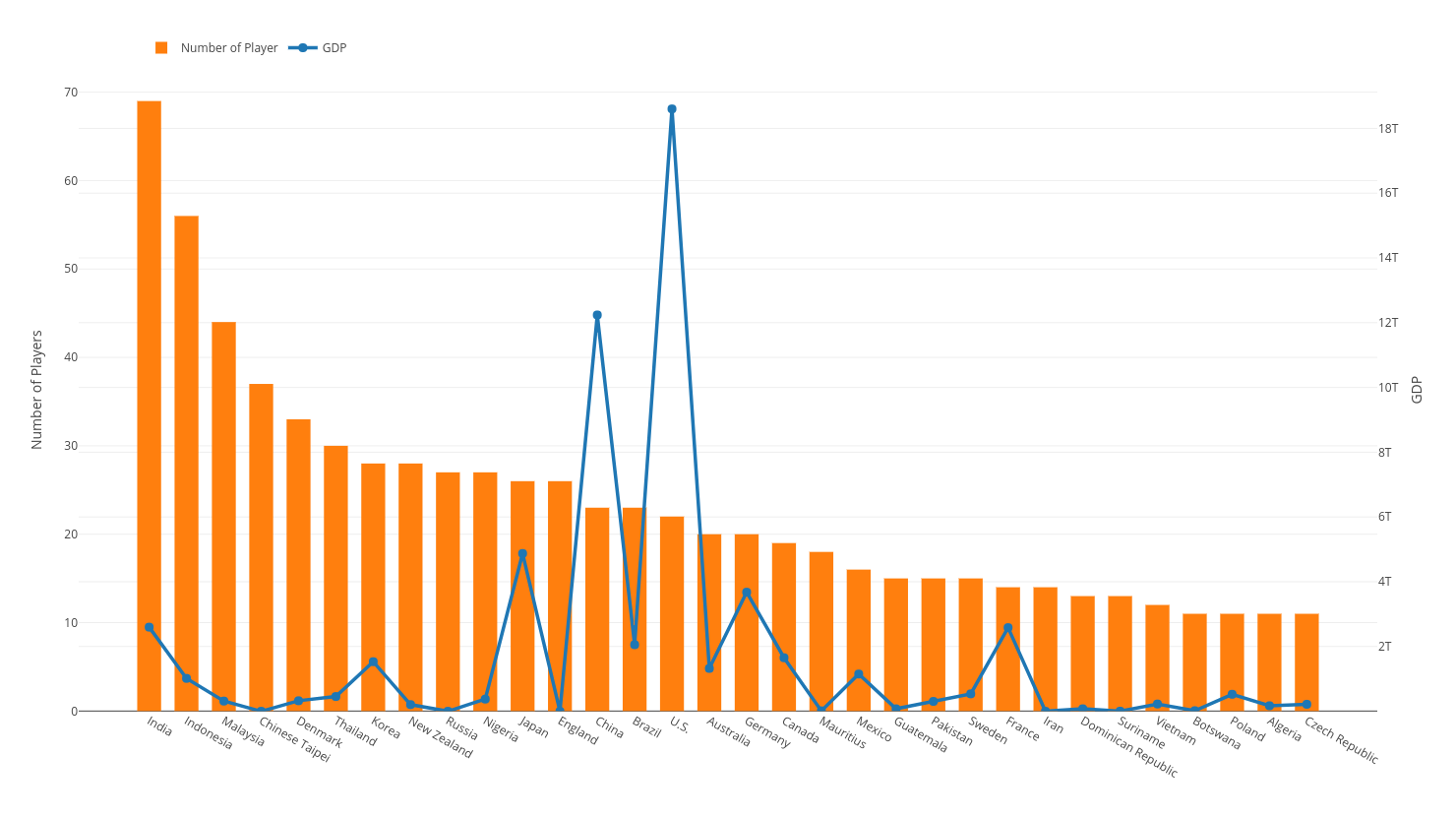 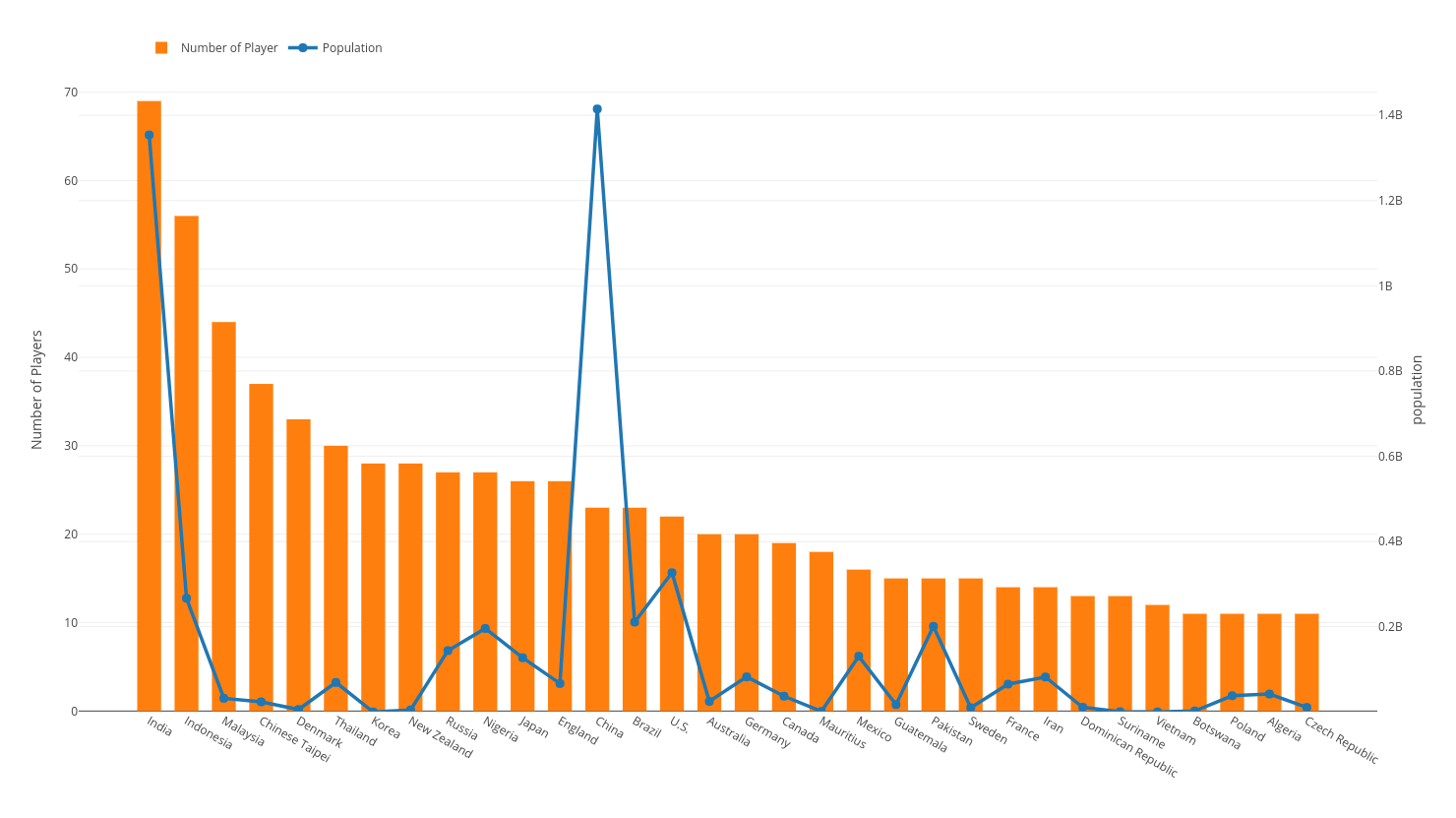 Since badminton is popular only in Asia, I want to compare how much a badminton can make with another popular racket sport which is tennis. The graph below is the wealth of world ranking players between badminton and tennis. As you can see that if you are a professional badminton player, you will make much less than a tennis player. 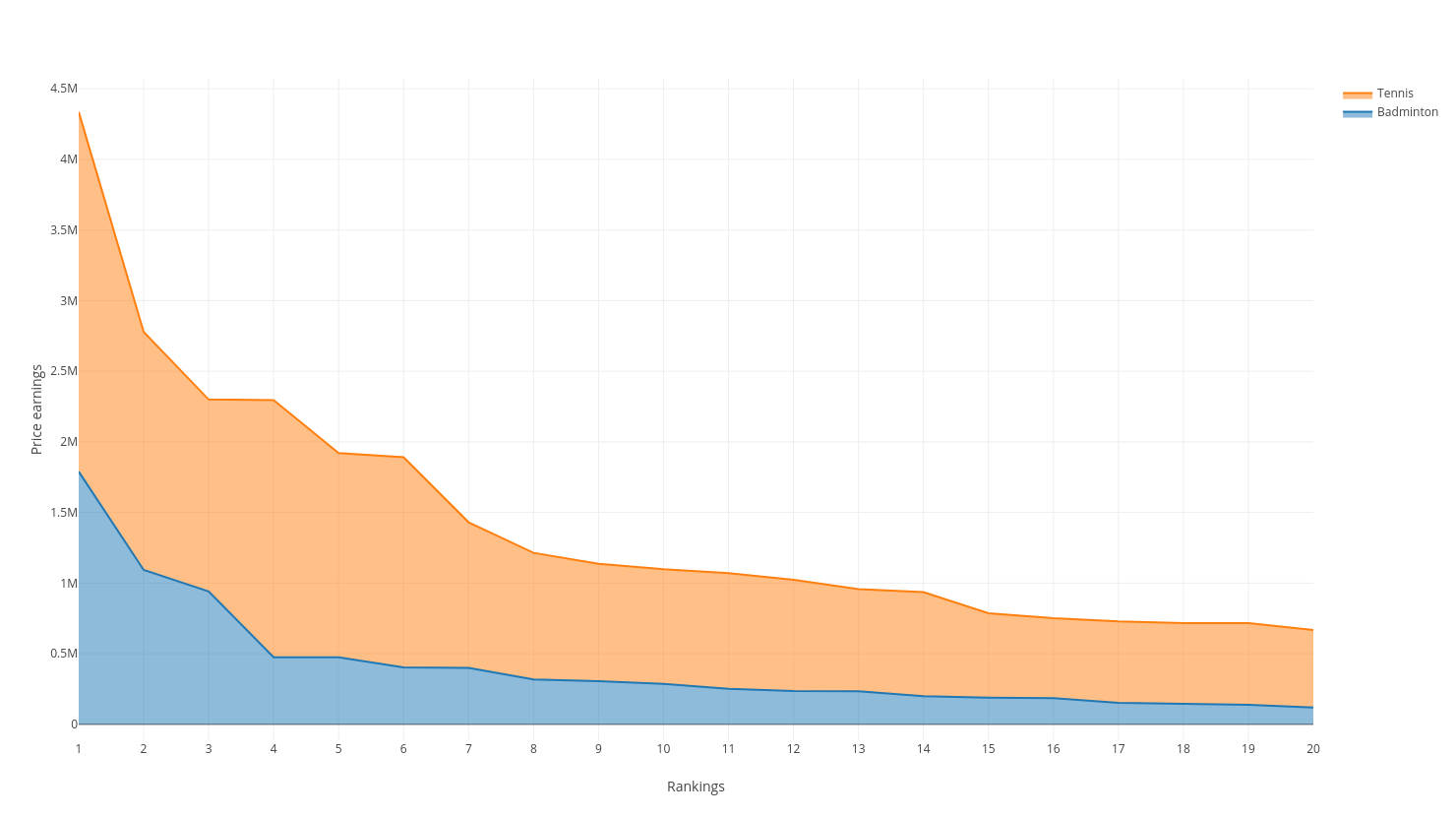 What is the intuition behind it? Well, Since countries' population and GDP are not the main impact on the prosperity of the badminton in China. There must be some other reasons that could potentially influence it. It could be the country's sports system has changed or other countries have put more resource such as money or population interest. To find the true reasons, this will be the work in the future that I will dig in. But if you are interested in badminton and want to become professional, then you can definitely find some help from my analysis. First of all, Since only Asian countries have most players contributed to the badminton, you need to start your career in those countries. Second, you need to start the career early in your age, because the average age of badminton players are between 19 to 32. Lastly, if you want to be excellent at badminton, your height could be another factor. Hopefully, my analysis will help you to gain information about badminton, and I will keep doing the research and update it in the future.

Fan received a Bachelor's degree in Economics from University of California, San Diego. Fan comes from an athlete’s background as a professional badminton player on Chinese National Badminton Team. Consequently, He never received a formal education until He...
View all posts by Fan(Jacky) Zhang >