What Makes a Successful App?

For the last ten years, Apple iOS store has now seen more than 170 billion downloads and more than 130 billion in consumer spend. By today, there are more than 2.2 million apps included in Apple Store. While the most popular apps such as Facebook, Netflix, and Instagram see hundreds of thousands of downloads per day, a huge number of apps don't get downloaded once in a month. As an app developer, you might wonder what makes people download an app and what makes the most popular apps successful. With such concern, I developed this shiny app as a reference tool for app developers to gain insights of the Apple Store market.

In case you are not clear which genre your app falls in, the genre comparison panel will be a good start. While Games has dominated the app market by taking over  50%, Social Networking apps received the most reviews with an average number of 45496. Not surprisingly, Facebook is the most popular app with a total reviews over 3 million. Before you publish your app, you may want to  choose your competitors wisely. In this Genre Comparison panel, you can compare genres by the number of reviews, rating scores, App Size, App price, etc.

The developers of Tinder must have thought this through and therefore categorized them as a lifestyle app, which makes them the second most popular app in this category.

Functionality is the key. 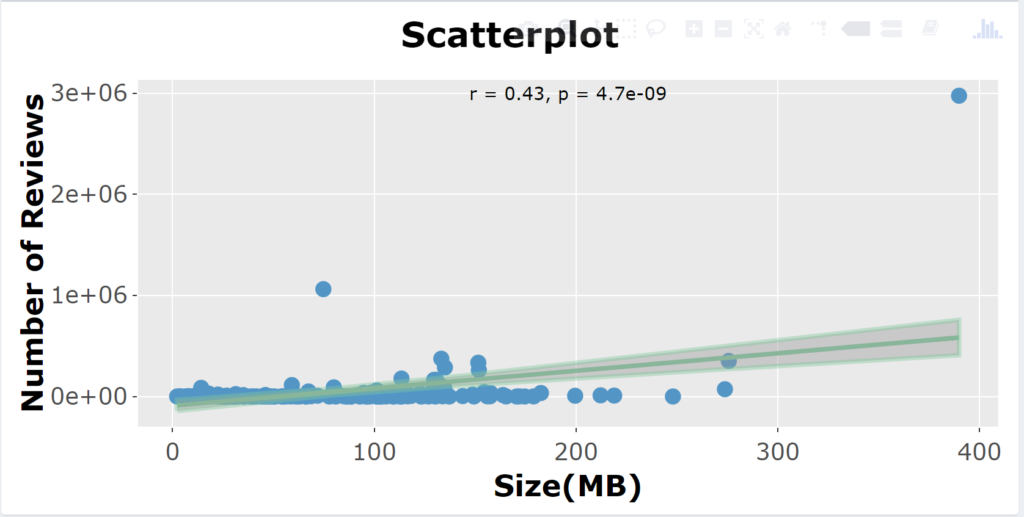 Take Social Networking as an example, App size turns out to be the strongest predictor of the popularity. The larger the size, the more reviews an app received.

(Link to the ShinyApp; See my Github Code)

Silvia is currently working as a Data Analysis Intern at the Aviation Planning Department of Port Authority of New York and New Jersey. She also has a Psychology background and is a second-year graduate student in New York...
View all posts by Silvia Lu >