What Makes it Funny?

Adam Cone is currently in the NYC Data Science Academy 12 week full time Data Science Bootcamp program taking place between April 11th to July 1st, 2016. This post is based on his third class project - Web Scraping (due on the 6th week of the program). The video of his presentation is here:

After decomposing each joke into a Python list of words, I wrote further code to obtain, for each joke, the values of three integer variables: word count, curse word count, and number of exclamation points. For this project a curse word was an element of list of 41 character strings that I cobbled together from internet research and my own imagination. I considered these three variables independent.

I read each of the 387 jokes with the intent to gather, as the independent variable, whether I found each joke funny. However, I noticed internally that whether a joke was funny wasn't the determination that interested me. I noticed that the jokes, even when I liked them, would also be associated often with unpleasant feelings, like sadness or disgust. I imagine this is why they are clearly labeled "offensive jokes" and not simply "jokes". Generally, this alloyed feeling led me to wonder whether, on balance, I was pleased I had read the joke or not. So, although I set out with the intention to determine whether a joke was funny, I ended up recording whether a joke was worthwhile: was I pleased that I had heard it? This variable was a 2-level factor: 'yes' or 'no'. Of the 387 jokes, I found 87 worthwhile ('yes') and 300 not worthwhile ('no').

First, I looked at word count. The distribution of word count for the 387 jokes is given in the histogram below. 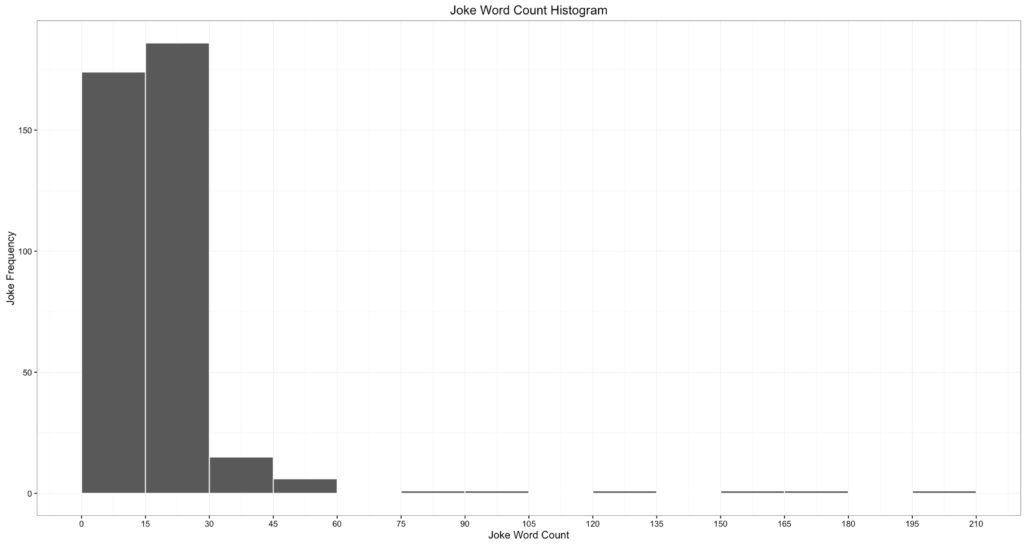 The majority of the jokes are relatively short (30 words or fewer), with a few long outliers. To visually determine the distribution of word count at each level of the dependent variable, I used a box plot, below. 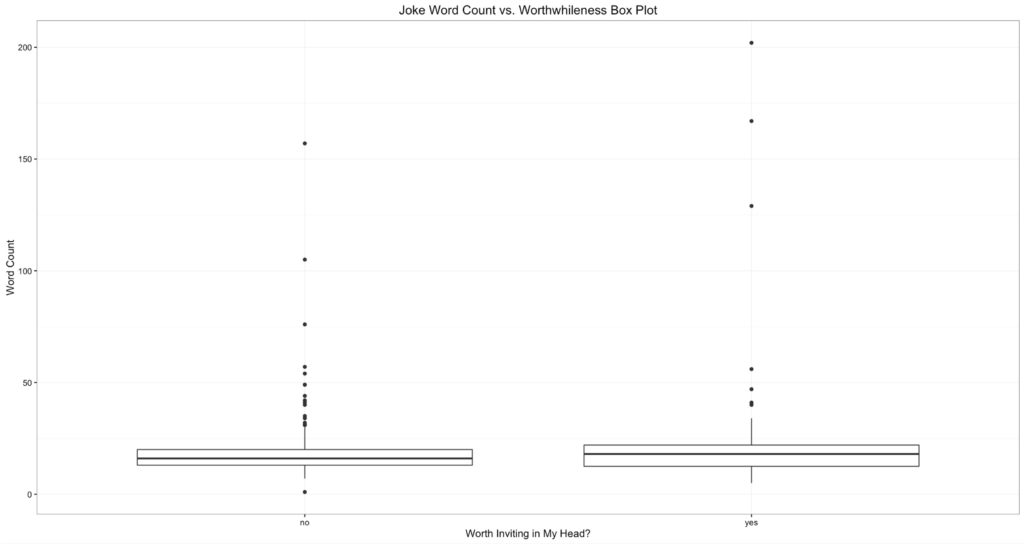 These distributions looked very similar to me. The median for 'no' is 16 and the median for 'yes' is 18. So far, I saw little evidence of a significant relationship between word count and subjective joke worthwhileness.

H_0 for Welch's t-test is that the 'yes' and 'no' populations have the same mean word count. The p-value for the test was ~7.6% so I fail to reject H_0 based on the standard 5% significance level. So, overall, I found little evidence for a relationship between word count and my response to the jokes.

Next, I looked at the curse word variable. The sample curse word distribution is illustrated in the following histogram. 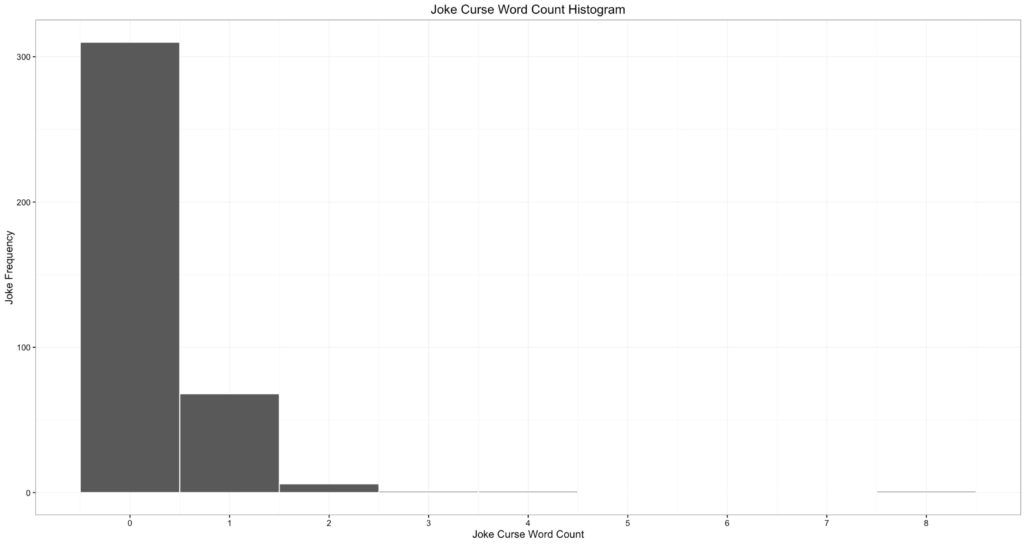 310 of the 387 jokes contained none of the 41 words I identified as curse words. To determine whether the distribution of curse words in the 'yes' and 'no' samples differed, I used a violin plot. I used a violin plot instead of a box plot over my default preference because the box plot had too much over-plotting to clearly communicate the distributions. 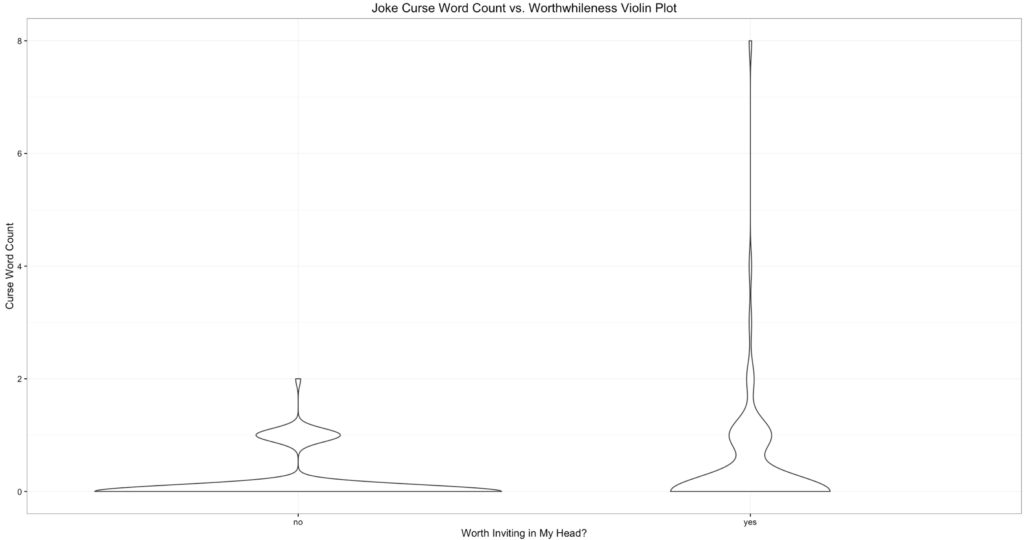 The median number of curse words in both the 'yes' and 'no' sample jokes was 0. The distribution for the 'yes' sample looks significantly taller, but it's possible that it just is accounting for a few outliers, which are visible in the histogram. Both distributions have heavy bases and don't look that dissimilar to me.

Again, after checking normality with qqplots and having already verified independence/randomness from the word count EDA, I performed Welch's t-test on the curse word samples. The p-value for the Welch's t-test was ~4.1%. While this is technically significant at the 5% significance level, it seemed unconvincing to me, given the violin plot. To further investigate, I considered each joke as either containing a curse word or not: the number of curse words became irrelevant. I thought this might mitigate the effect of the few heavy curse-word outliers. This left me with the following table. 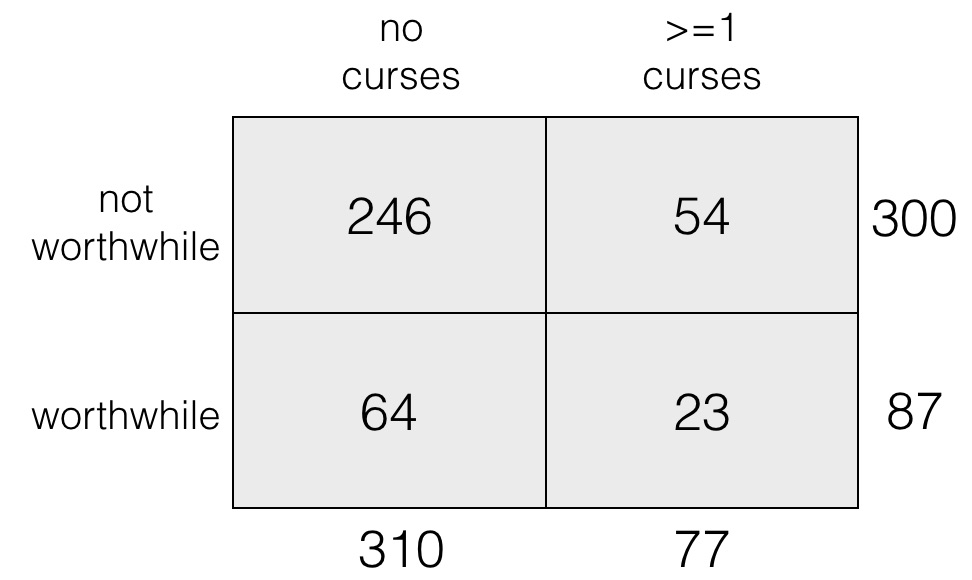 Now, since I had, in my own tortured way, already verified independent, random sampling, the only assumption necessary for the chi-squared test, I ran a chi-squared test to determine whether these variables, with curse words considered as a binary variable, were independent.

None of the four variable combinations yielded large residuals. Unsurprisingly, the p-value for the test was ~11.3%, which is not significant at the standard 5% significance level. Therefore, I failed to reject H_0.

So, my take-away is that I failed to find convincing evidence for a relationship between curse words and my response to the jokes. Although, when considered as an integer variable, the curse words showed a technically significant relationship to my response, the p-value was high and I sense that this was largely a result of a few outliers with high curse word count. 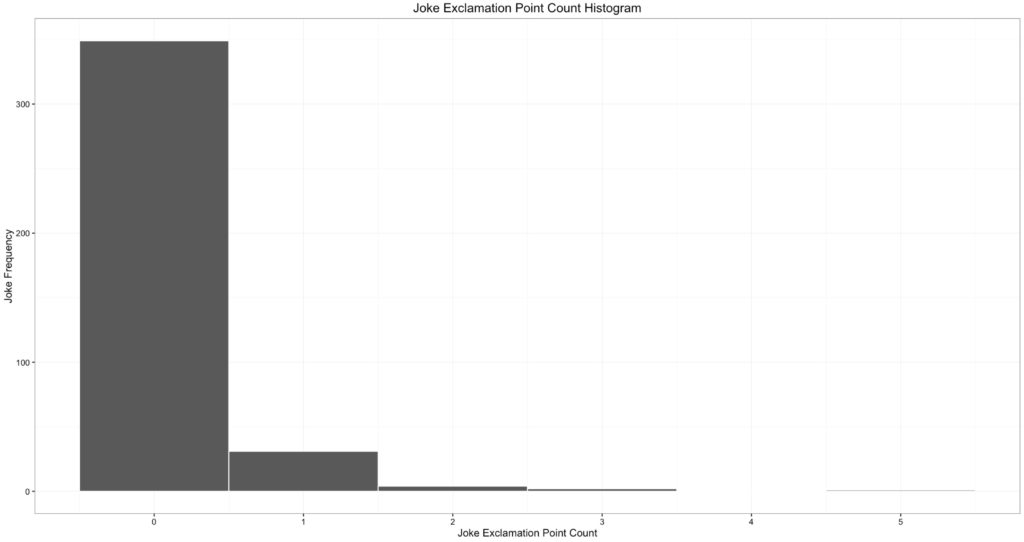 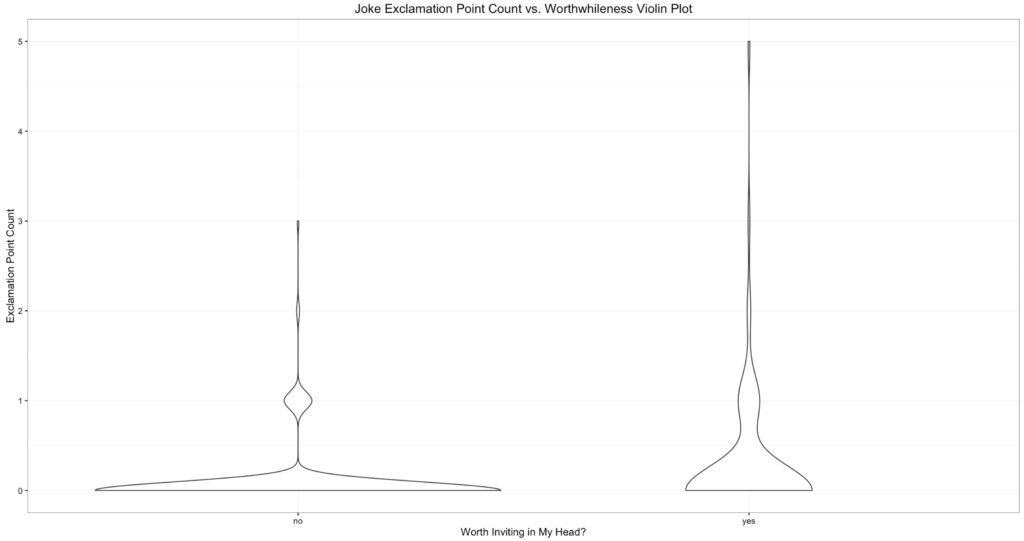 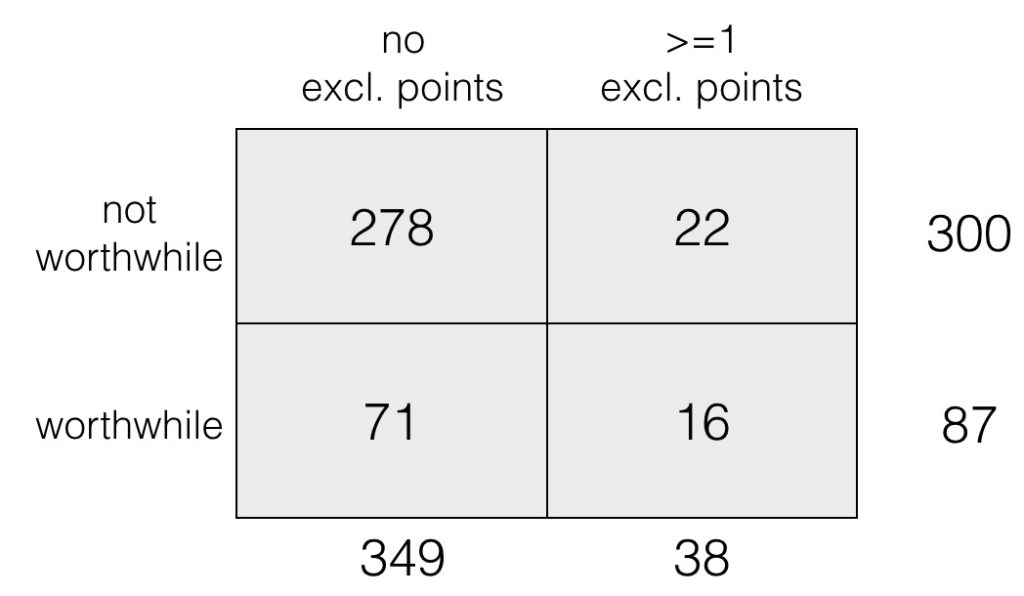 Now, since I had, in my own tortured way, already verified independent, random sampling, the only assumption necessary for the chi-squared test, I ran a chi-squared test to determine whether these variables, with exclamation points considered as a binary variable, were independent.

Here, there is a significant residual for the combination of worthwhile jokes and exclamation points: more than expected! The p-value for the chi-squared test was ~0.4%, which is significant at the standard 5% significance level.

Overall, I see significant evidence of a relationship between exclamation points and my response to the sample jokes. The Welch's t-test p-value was low and I can't dismiss this as some kind of outlier effect, since the chi-squared p-value was even lower.

If I worked on this project further, would like to pursue

Torri July 9, 2016
This web site is actually a walk through for all the information you desired about this and did’t know who to ask. Glimpse here, and you’ll undoubtedly find it.