What matters more in Starcraft 2, your mechanics or your strategy? --Draft

Over the ages, from amateur players to professionals in the Starcraft 2 scene, the debate about the relative importance between a player's mechanics and strategic preparation has been one of the most heated.

To give some background info, Starcraft 2 is one of the most competitive and lucrative esports title in the world. Some of its most prestigious tournaments boast championship winnings netting over $ 100K. As such, myriad professional teams and players exist and actively compete at the moment, not to mention the online match-making system Battle.net by Blizzard that hosts hundreds of thousands of enthusiastic fans.

Since Starcraft 2 is probably one of the most competitive game in the world by skill level, its players have wondered just what constitutes game-changing skills. One of the big framework or contention in this respect is the war between mechanics and strategy. To put it simply, a player's mechanics is primarily measured by that player's APM (action per minute), which measures the number of clicks by keyboard of mouse per minute. Alternatively, a player's strategic preparation is far more elusive, as it can range from build order preparation to unit specific counters. In our R shiny toy visualization,  we have been forced to use unique units made per game second as a proxy for the player's strategic preparation since the author thinks that's the best proxy out of the few statistics contained in the original data set. Without further ado, let's launch into the graphs! 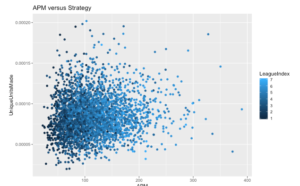 In the above graph, we have a scatter plot showing each player's APM on the x-axis, unique units made per game timestamp on the y-axis, and a legend for the player's skill level, i.e. 1-7 with 1 being the least skilled and 7 being professional. Accordingly, the lighter the dot, the higher skilled level the dot represents. Here we can see that there's a huge amount of variation in the players' style as measured by APM/Strategy. You can see lighter blue dots on either the far right bottom corner or the top left corner, which says that players can be skilled either by having great mechanics or great strategic preparation. Finally we see the dots getting lighter as they branch out into the +x, +y direction ray, showing that indeed the two measurements correlate positively with skill level. 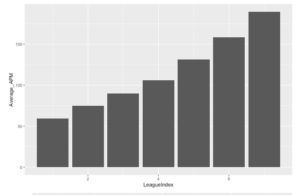 In the above graph we get a bar chart showing the player's skill level as the x-axis and average APM on the y-axis. We clearly see a positive correlation between the two. In the graph below, we get a bar chart instead showing the strategic preparation on the y-axis, where we see a similar but distinct trend. A final note to the analysis is the author believes an additional scatter plot of the APM/strategy v.s. skill level will help us see more structure into the data, rather than the one dimensional average statistics already displayed. 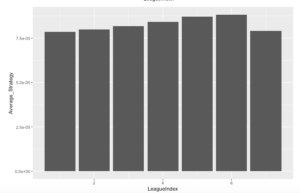 I graduated from NYU with a bachelor's degree in Math.
View all posts by Jason Lai >