Contributed by Sricharan Maddineni. He is currently in the NYC Data Science Academy 12 week full time Data Science Bootcamp program taking place between January 11th to April 1st, 2016. This post is based on his second class project - R Shiny (due on the 4th week of the program).

Why Are Airports Important?

Aviation infrastructure has been a bedrock of the United States economy and culture for many decades, and it was the first instrument through which we connected with the world. Before the invention of flight, humans were inexorably confined by the immenseness of Earth's oceans.

All the disdain and unpleasantries we endure on flights are quickly forgotten once we safely land at our destinations and realize we have just been transported to a new place on our vast planet. Every time I have flown and landed in a new country or city, I am overwhelmed with feelings of how beautiful our world is and how much I wish I could visit every corner of our planet. My love of aviation has led me to investigate the connectedness of United States airports and the passenger-disparity between the developed and developing countries.

The interactive map can be used as a tool to investigate the connectedness of the US airports. Users can choose from a list of airports including LAX, JFK, IAD and more to visualize the connections out of that airport. The 'Airport Connections' table shows us the combinations of connections by Airline Carrier. For example, we can see that American Airlines (AA) had 8058 flights out of LAX to JFK (2009 dataset). The 'Carriers' table shows us the total flights out of LAX by American Airlines (76,670).

If we select Hartsfield-Jackson Atlanta International, we see that it is the most connected airport in the United States. *Please note that I am not plotting all possible connections, just major airport connections and only within the United States (the map would be filled solid if I plotted all connections!). The size of the airport bubble is calculated by the number of connections. Therefore, all large bubbles are international airports and smaller bubbles are regional/domestic airports.

I also plotted Voronoi tesselations between the airports using one nearest neighbor to show the area differences between airports in the Eastcoast/Westcoast/Midwest. The largest polygons are found in the Midwest because airports are far apart in all directions. These airports are generally more connected as well since they are connecting the east and west coast (see Denver International or Salt Lake City International). Clicking on a Voronoi polygon brings up the nearest airport within that area.

Why is it important for countries to improve their airport infrastructure?

Most importantly, countries moving upward show noticeable gains in GDP whereas countries moving horizontally show minimal gains over the last four decades (GDP is represented by the size of the bubble). We can also notice that airline passenger counts plunge during recessions for first world countries but remain comparatively steady for developing countries (1980, 2000, 2009). We can interpret this to mean that developing countries are not as connected to the rest of the world since their economies are unaffected by global economic crises.

Passenger Counts during weekends and Holidays

The calendar heatmap shows us the Daily flight count in the United States. We can recognize that airlines operate significantly fewer flights on Saturdays and National Holidays such as July 4th and Thanksgiving. The days leading up to and after National Holidays show an increase in flights as expected. Looking carefully, you can also notice there are fewer flights on Tuesdays and Wednesdays, and there are more flights during the summer season.

If you select a day on the calendar, a table shows us the top 20 Airline carrier flight counts on that day. Southwest, American Airlines, SkyWest and Delta seem to operate the most airlines in the United States. 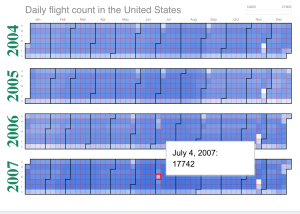 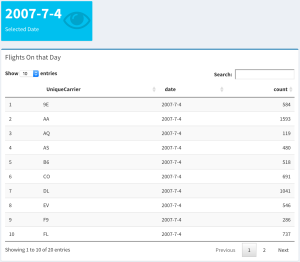 I utilized comprehensive datasets provided by the United States Department of Transportation and Open Data by Socrata that allowed me to map airport connections in the United States. The first airport dataset included airport locations (city/state) and their latitude and longitude degrees, and the second dataset included the airport connections (LAX - JFK, LAX-SFO, ...). First I used these datasets to calculate the size of the airport based on how many connections each had.
https://gist.github.com/sriyoda/01171d8d286a10fa2884

The second analysis was done using the airline passenger, population, and GDP numbers for the world's countries over the last 45 years. Most of the work here was in transforming the three datasets provided by the World Bank from wide to long. See the code below.
https://gist.github.com/sriyoda/6c514e13737afaa043ba

I knew there as an error by looking at the resulting heatmap but I didn't realize this was showing me a cumulative sum by month rather than the daily flight count, so I hit twitter to see if I could get help diagnosing my problem. I tweeted Jeff Weis who appeared as the Aviation Analyst on CNN during the Malaysian Airlines MH370 disappearance and he caught my mistake! After he pushed me in the right direction, I corrected my code to:

@sriyoda I'd guess you're looking at cumulative # flights to date, w/ counter reset to 0 at start of each month?

The second step was creating the line connections between the airports. To do this, I used the polylines function in Leaflet to add connecting lines between airports filtered by user input. input$Input1 catches the user selected airport and subsets the dataset by all origin airports that equal the selected airport. The gcIntermediate function makes those lines curved.
https://gist.github.com/sriyoda/59a1c7de8e03e9842743

The calendar chart required two parameters, the datevar which reads the date column, and numvar which plots the value for each day on the calendar. Then I utilized a gvis.listener.jscode method to capture the user selected date and filter the dataset for the table.
https://gist.github.com/sriyoda/96552588a4c1c1d2e7eb

used rolex submariner imitation September 4, 2017
I just like the valuable info you provide to your articles. I will bookmark your blog and check again here frequently. I am relatively sure I’ll be told many new stuff right here! Good luck for the next!| used rolex submariner imitation http://www.movement-watch.com/rolex-watches-auction-the-four-most-eye-catching-watches.html

Nicole November 1, 2016
I was just looking at your Airport DashBoard site and see that your site has the potential to become very popular. I just want to tell you, In case you don't already know... There is a website network which already has more than 16 million users, and most of the users are interested in topics like yours. By getting your website on this network you have a chance to get your site more popular than you can imagine. It is free to sign up and you can read more about it here: http://hw23.de/eyml0 - Now, let me ask you... Do you need your site to be successful to maintain your way of life? Do you need targeted traffic who are interested in the services and products you offer? Are looking for exposure, to increase sales, and to quickly develop awareness for your website? If your answer is YES, you can achieve these things only if you get your website on the network I am describing. This traffic service advertises you to thousands, while also giving you a chance to test the service before paying anything. All the popular sites are using this network to boost their traffic and ad revenue! Why aren’t you? And what is better than traffic? It’s recurring traffic! That's how running a successful website works... Here's to your success! Find out more here: http://hw23.de/eyml0 - Unsubscribe here: http://zntc.ca/ztc/6uzz2