The excitement generated by the Olympics has been on the decline, and some choices of locations such as Beijing have aroused political controversy. However, the Winter Olympics continues to captivate more attention than its warm weather counterpart. Unlike the Summer Olympics, which features an extensive collection of sports that can be practiced in all climates and at all budgets, data shows that only a select group of countries located in regions experiencing cold climates producing snow and ice as well as possessing the financial means to participate in the expensive sports that require specialized training and equipment are involved in this event.

While there have been exceptions to this rule, such as the Jamaican bobsleigh team of the 1988 Winter Games in Calgary, Canada immortalized in a 1993 film, as well as various athletes recently as a result of a diversity initiative; even then, such teams have to travel abroad to train.

This study covered the results of countries that have won Olympic medals in the Winter Games:

It divides the events into four main categories:

However, it excludes the following sports, due to the subjective nature of their scoring and/or limited participation among countries:

Data About the Role of Population and Wealth

In order to produce athletes for winning medals in international sports, a country needs a large population to create that pool of candidates to train. However, such training is expensive, particularly for winter sports. Consequently, a country needs to be financially robust in order to fund such non-critical activities designed more for national pride. A high GDP per capita (nominal), although not a perfect measure of a nation's financial wellbeing, is still a strong indicator for measuring that.

The More the Merrier?

That said, the most populous countries that have won medals in the Winter Olympics from 1998 to 2022 are:

Note: GDP per Capita is in USD

The most affluent countries that have won medals during that period are:

Note: GDP per Capita is in USD

The Mightiest of Them All

Note: GDP per Capita in USD

Both large populations and high affluence work in the favor of Germany and the United States.  However, the large number of winners from Norway, Canada, and Russia, prove that other intrinsic factors such as climate and hence winter sports culture can have a huge impact. This could even apply to Germany punching well above its weight in comparison to the larger and wealthier United States.

Now that the basic trends have already been called out, now it is time to visualize the intersection of population and affluence towards producing talent in the Winter Olympics. However, it is important to first determine which correlation is stronger in order to produce a more meaningful analysis

Men vs Money (or Means)

Although the correlations between population and wealth are rather weak, due to the limited geographic limits where winter sports can be regularly practiced, ultimately money does talk in determining which countries are able to advance their human resources further. 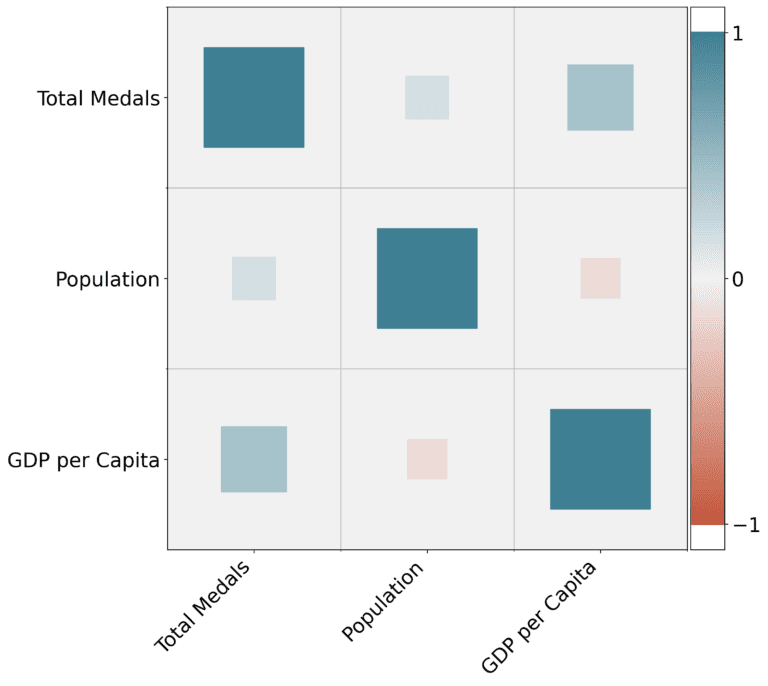 Data About the Battle of the Nations

There can be nine classifications identified among the level of performance with respect to the potential budget available for a nation's winter sports program, as illustrated on this plot: 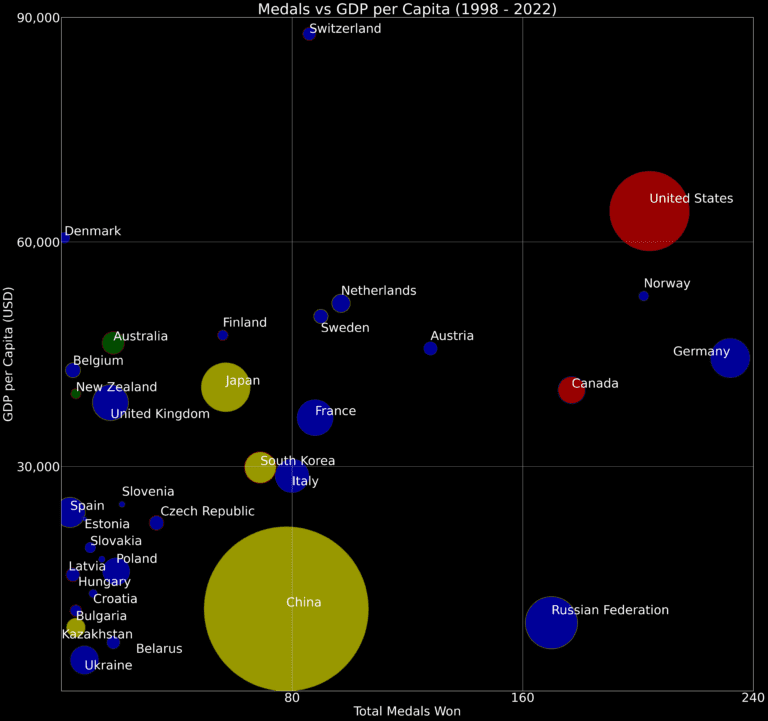 While it is understandable that the small populations of Switzerland and Denmark do not produce the same number of candidates that would be produced in the United States, it is puzzling why they perform worse than other German-speaking or Scandinavian countries. Canada, Germany, and Norway have the advantages of favorable climates for winter sports and therefore a cultural practice surrounding them. With better finances, Russia would have great potential to surpass all other countries.

The Netherlands has a good winter sports program that far surpasses neighboring Belgium’s. South Korea, despite its lower GDP per capita as compared to Japan, far surpasses its neighbor and has a high potential to advance further. Likewise, China has a potential to excel in winter sports as its economy grows and boosts the overall wellbeing of its citizens to allow them to train for the competition. It is puzzling how Australia and New Zealand manage to win medals despite how suboptimal their climates are for winter sports, but they still manage to do so. Having a high disposable income helps, too.

Data About The Battle of the Continents

Due to climate and culture, winter sports remain a largely European pursuit. Although the United States, Canada, Australia, and New Zealand possess high wealth, they lack the ideal conditions for developing the superior talent of Europe. Likewise, East Asia has a large population but lacks the overall climate and disposable income to engage in winter sports more frequently. 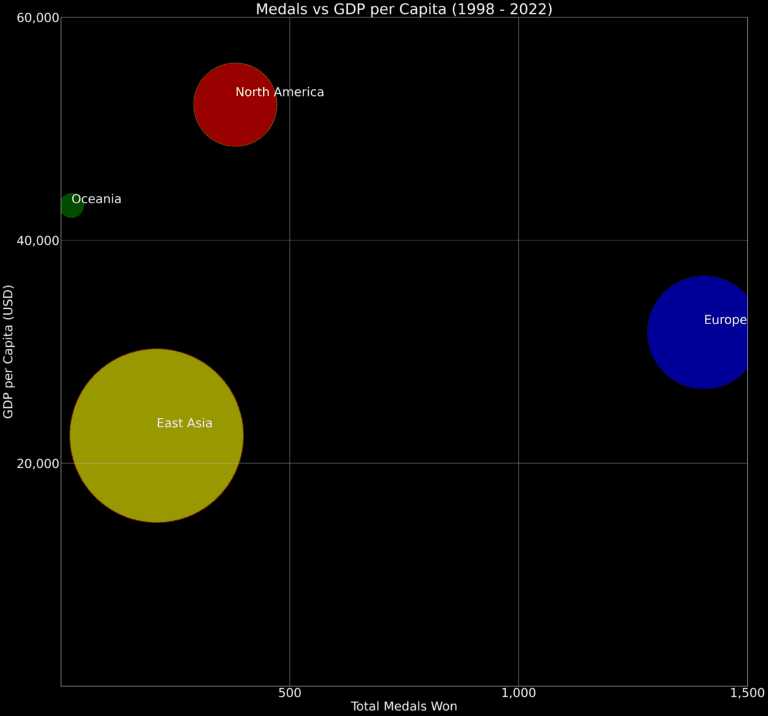 But Who Does Data Show is Good at What?

Despite the overwhelming dominance that Europeans have in winter sports, North Americans, East Asians, and those Down Under are still winning medals. Now it's time to see where the strengths in these non-European participants lie in order to see which types of events carry great potential to grow participation among these and more non-Europeans in winter sports in the future.

Sledding continues to remain a predominantly European-dominated (particularly German-speaking) event category, with three-quarters of medals claimed by that region while the remaining are mostly lapped up by Americans and Canadians.

While Europeans claim about half of all medals in speed skating, they are primarily in the long-track events. East Asians have made a dominant stride, particularly in short-track events with South Korea, taking the exceptional lead in this category. Due to the indoor nature of this sport, it is possible to practice it anywhere, so long as there are skating rinks. This possibly explains its popularity in the United States and Canada, with participation by athletes of all races.

The Data About That Fancy European Thing

When I first started learning to ski in 2010, I was excited to discuss it with my coworkers at my job in Pennsylvania at that time. Apparently, most of them preferred snowboarding, claiming that skiing is "that fancy European thing" that their parents did. Predictably enough, skiing is virtually in the hands of Europeans, possibly explaining why American champion skiers such as Lindsey Vonn achieve such widespread celebrity status for doing the statistically unthinkable.

I was watching the 2010 Vancouver Winter Games on television by myself in my Pennsylvania apartment at that time. So, I decided to chat online with other friends about it. One of them happened to be a sports buff who mainly follows baseball but provides insight on all else. He declared, "When Americans suck at sports, they just invent their own." Surfing is a traditional American pastime, whether it's ocean surfing, sidewalk surfing (skateboarding), or just web surfing.

That is the reason 1998 was chosen as the year to begin this study, since that was the first Olympiad in which snowboarding was an official event. Ever since then, even though half of the medals are still won by Europeans, Americans and Canadians have been crushing it for the most part. It is also the category of events in which Australians and Kiwis have been demonstrating their talents.

Why Does All This Data Matter?

There have been major trends happening in the last half of the century that have been defining what direction the world is headed towards. Europe is mostly aging and having its traditional populations replaced by immigrants from warmer climates not accustomed to winter sports. North America and Oceania continue to have strong economic engines that attract the best and brightest who are interested in expensive pursuits as well. East Asia has been economically expanding rapidly and giving rise to a class of professionals with disposable incomes to spend on traveling and luxury goods, as well as winter sports.

For the moment, Europeans have been dominating the medal counts in the Winter Olympics. 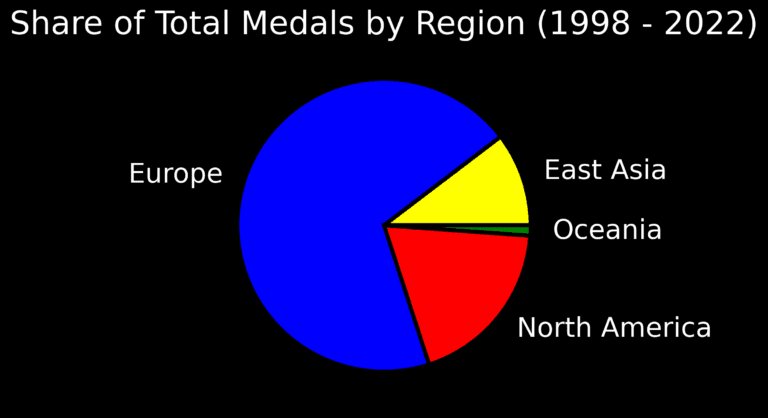 However, a greater share of the population of the countries that have been winning medals at the Winter Olympics are located in East Asia. 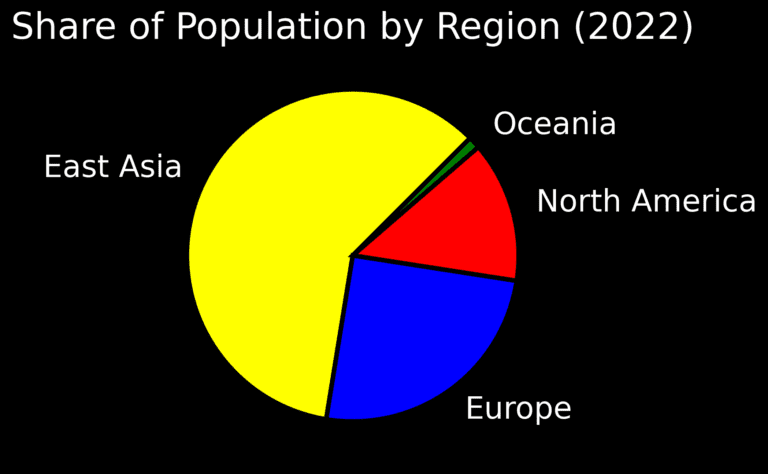 On top of that, both the East Asian and North American countries that win medals in the Winter Games account for an overwhelmingly high share of the global economy. 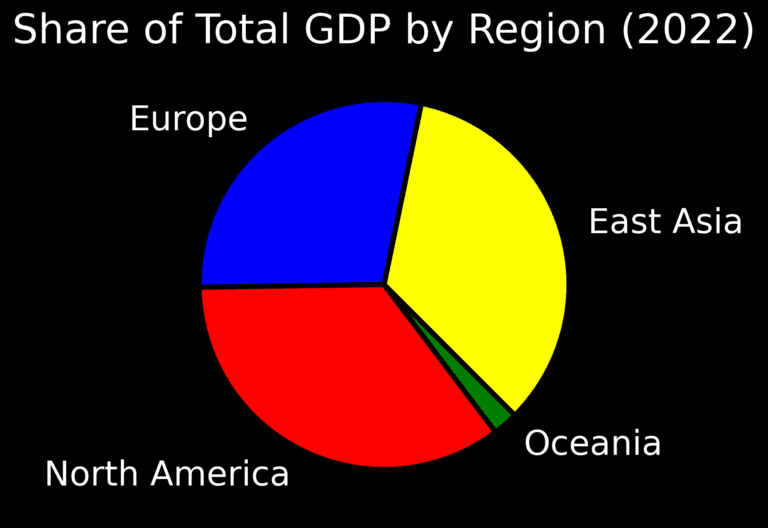 Therefore, while winter sports have been long established within Europe and North America, East Asia represents a large potential market for expanding participation in them. In fact, half of the past six Olympiads have been hosted in Asian countries. Speed skating holds the possibility of expanding the participation and interest in the Winter Olympics beyond the traditional locus of Western and Northern Hemisphere countries to parts of Asia and possibly Latin America and Africa.

Even a small number of countries in South America, South Asia and southern Africa actually do have places to ski and snowboard and could be developed as potential markets for winter sports equipment and instruction. It is also critical for European countries to sustain their winter sports traditions and welcome newcomers from countries without them into the fold to retain their dominance.

The skills I demonstrated here can be learned through taking Data Science with Machine Learning bootcamp with NYC Data Science Academy.

"Competing in the Winter Games, Without a Snowball's Chance" [New York Times]
https://www.nytimes.com/2022/02/15/world/asia/winter-olympics-no-snow-countries.html

Creative data scientist who is passionate about applying machine learning to model physical processes, logistics, and business activities. Integrating over 15 years of civil engineering experience to blend technical and leadership background with data science skills to solve...
View all posts by Joydeep Chatterjee >