Are the workers safe in the US?

Why should we be concerned about job safety and health?

I would like to answer with one simple question: How would you feel if you left your home to go to work and never came back?How do you think your family would feel about it? You may think it is not very common, but it is. In the past years at least 4,500 workers died, each year, in work related occurrences. In 2015 there were 4,836 work related fatalities in the United States, which means at least 13 fatalities per day.

Besides fatalities, 6 million workers suffer non-fatal workplace injuries at an annual cost to U.S. businesses of more than $125 billion. The Bureau of Labor Statistics (BLS) estimates that employers record nearly 3 million serious occupational injuries and illnesses annually on legally mandated logs. About half of recorded injuries require at least a day away from work, a job transfer or a work restriction for recovery.

In addition, the costs of workplace injuries are borne primarily by injured workers, their families, and taxpayer-supported components of the social safety net. Changes in state-based workers’ compensation insurance programs have made it increasingly difficult for injured workers to receive the full benefits to which they are entitled. Employers now provide only a small percentage (about 20%) of the overall financial cost of workplace injuries and illnesses through workers’ compensation. This cost-shift has forced injured workers, their families and taxpayers to subsidize the vast majority of the lost income and medical care costs generated by these conditions.

The data used was made available in different table formats and the Bureau of Labor Statistics website allows you to download the data using combination of queries, what imposed a sort limitation on the data. The number of man-hours worked used to generate the injury rates was not available in the same structure of the other indicators, so it was necessary to create an estimate number based on the number of injuries and the associated rate available. Further, it was necessary to estimate the fatality frequency rate for some states that were missing in the database.

For my analysis, I specifically looked at work related fatalities and their relation with lost time cases. I attempted to answer the following questions:

The first insight was how the occupational fatalities are distributed along the US considering the 51 states available in the database and the District of Columbia in 2015.

However, comparing the states on number of fatalities does not seem fair, given that there are a significant difference in the number of workers. In order to get a better comparison criteria, I decided to use the fatality frequency rate. For this study the following formula was used:

The number 20,000,000 is used to give a better interpretation of the number and it represents 10,000 full-time employees working 40 hours per week and 50 weeks per year.

Another exploratory analysis done in this study was check if the fatality frequency rate recorded in 2015 was the best one achieved since 2011, which would mean that the state is getting better on reducing work-related fatalities. The table below shows the states in ascending order per fatality frequency rate and that more than half of the states are getting or got worse since 2011. The column “The Last is the Best?” informs if the last fatality rate (2015) is the best one (lowest one) from 2011 to 2015. 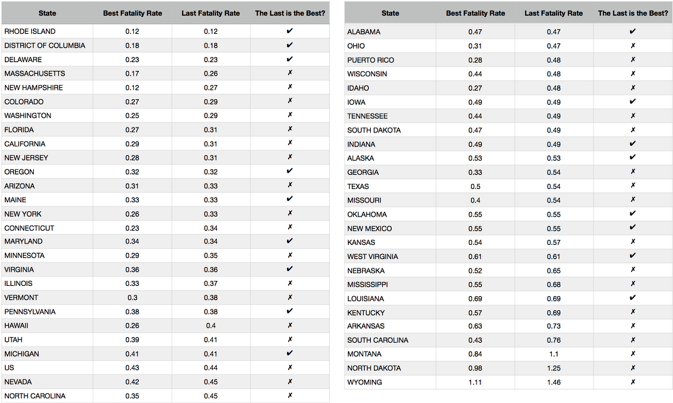 Despite the decades-old legal requirements that employers provide workplaces free of serious hazards, in the US, we still have an average of 13 workers dying daily from injuries incurred on the job. The chart with the total number of fatalities shows that we are having more work related fatalities than previous years, but it might be related to an increase on the number workers. In order to verify if the US are improving or not, I also checked the fatality frequency rate. The fatality frequency rate chart does not show a consistent improvement in this indicator. 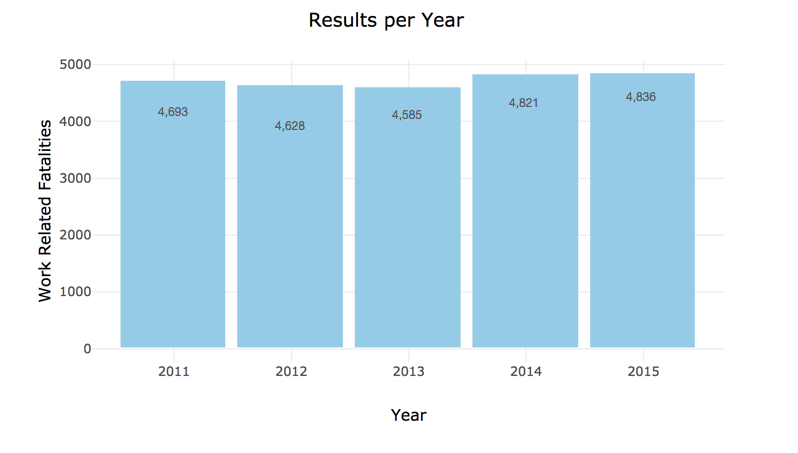 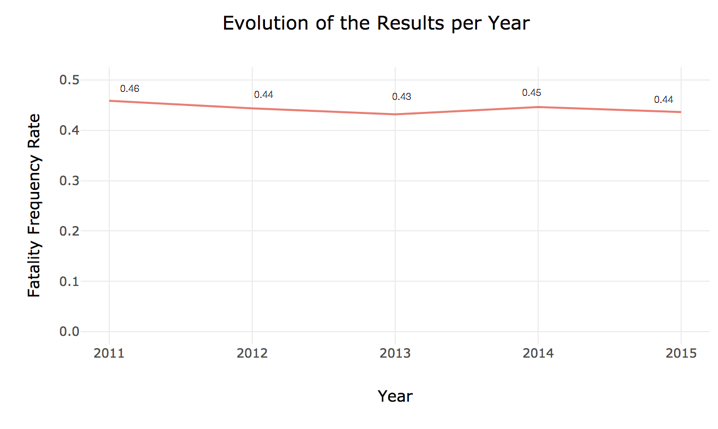 Types of Events that Lead to Fatal Injuries:

Each injury has a type of event that lead to it. What do you think that causes more work-related fatalities in the United States? Do you think is this changing over the years? The chart below shows that transportation incidents has the highest frequency of fatalities, representing 42% of the data in 2015. The second one is fall, slips and trips with 17% of the total, followed by contact with object or equipment and violence, that represents about 15% each.

Analyzing the yearly evolution, it is not changing significantly. It is possible to notice a slightly reduction on the violence section and increase in the transportation.

When I compared the states to see if they all have the same behavior, transportation is the most frequent in almost all the states, which is consistent with what was identified in the US chart. The number of fatalities per type of event was missing from Rhode Island in 2015.

It was shown before that transportation events were the most frequent to cause occupational fatalities, but I was curious to know if they also lead to the highest number of work-related lost time injuries. The chart below shows that the proportions are completely different. The overexertion and bodily reactions is the most frequent on lost time cases, followed by falls, slips and trips, which happens to be at the same position of fatalities. The contact with object or equipment represent a wider proportion on lost time injuries than in fatalities.

The conclusion is that the risks associated to these types of events are very different from each other. One type of event has a higher probability to generate a fatality than a lost time and vice-versa. For instance, when you think of someone falling on the floor (at the same level), you may not consider that this person is going to die, but when you think about a car crash, the scenario is completely different.

I invite you to interact with my Shiny App to further explore the data and my insights.

MBA in Business Analytics and Big Data (ongoing) and recent certification as Data Scientist with an engineering background alongside with 7 years of corporate business experience. A problem solver with passion to gather and analyze data to drive...
View all posts by Neuton Fonseca >

Yasmin October 25, 2017
Wonderful approach! I can see an app like the one you developed being quite useful to many companies.