In Shiny project, I downloaded the data of total population, mortality rate, birth rate, life expectancy, infant mortality rate, population aged 65 and more that provided from United Nation. I separated the world data by continents so that viewers not only can see the where the rate is high or low around the world, but also can see which country has the high or low rate in different continent.

The purpose of this shiny project is by doing this, I hope I can provide help for people in United Nations to see which country is the worst on certain problem, so United Nations can locate their resource on those nations which needs the most.

First I will show you what's the general picture look like when you enter the shiny. 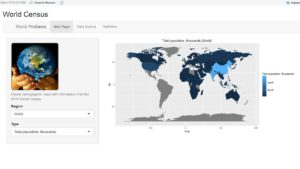 below is when people select by clicking into different continent. 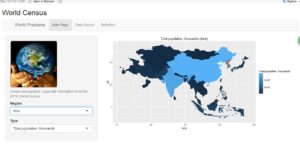 In above Asia graph, we can see that they select the population. The more blue means that the population is more. the darker means less people. So as we can see from above, we know that in Asia, China and India has the most population, and the rest countries in Asia has relative low population

I will show another example. 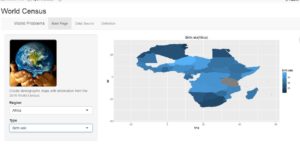 above I select the Africa as the region and birth rate as the type, the more lighter the blue means those countries has more birth rate per 1000 people, so it's not hard to see that the mid Africa has the highest birth rate. But from the below graph, we may compare with the infant mortality rate. 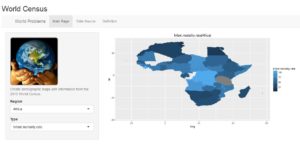 In the above graph, we also found out that the infant mortality rate is also very high in the Mid-Africa, so from the above two graph, we can see that even though in central Africa, the birth rate is very high, the whole population may be not increasing too much because the high infant mortality rate.  We may guess it is because of the low medical care or health policy. So United Nations can put their resources on those problems to change the infant health condition in the place where they most needed.