7.4 Billion Earthlings on One Planet: Trends of the Past 60 Years 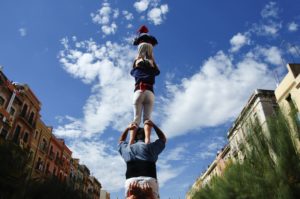 Assume the average height of human (including men, women, and children) on Earth is slightly more than 1 meter, and each person stands on the shoulders of another one to build a ladder sticking to the blue sky. Given the circumference of Earth at the equator, which is about 24,874 miles, the ladder of height 7,441,490,775 meters (4,623,928 miles) can wrap around the Earth’s equator 186 times! If we collectively stack ourselves towards Mars, then the ladder height is 3.3% of the mean distance from Earth to Mars (140 million miles). 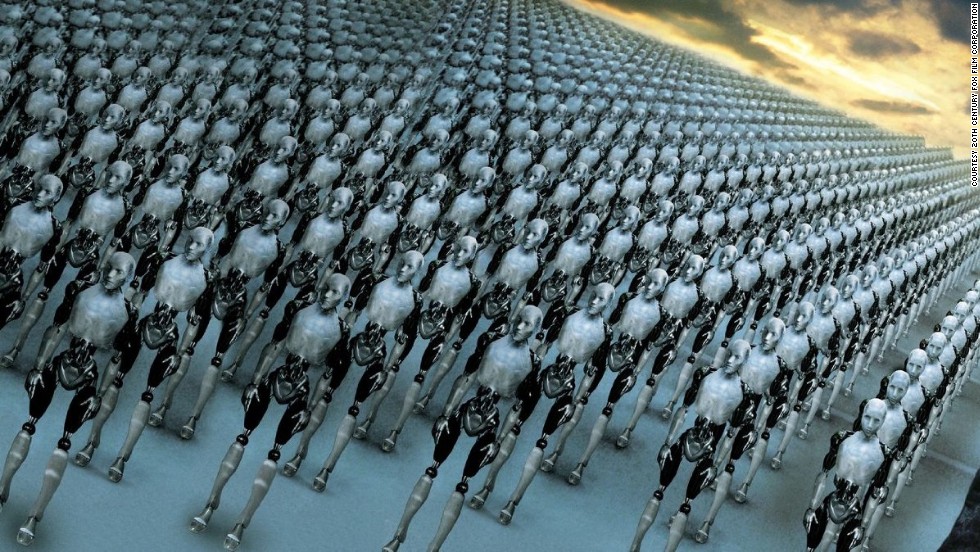 If each of us stands straight within a square of 1 square yard in area, one besides another, to form a massive infantry square, the entire world population then occupies 2,402 square miles, which is equivalent to 105 Manhattan Islands, or 7.9 New York City, or 21% of the entire Hawaii Islands.

In computer science terminology, if each person maps to one byte of memory of your laptop, then the entire population consumes around 7.44 GB of memory.

Isn't this a huge number? Don't forget, as you take 3 minutes to think through these facts in your head, hundreds of babies have been born.

As we analyze the past 60 years of human history, we can see that different regions of the world have shown distinct trajectories of population growth. I am especially interested in investigating these growth trends, and answering the following questions:

The Shiny app can be found here: https://sundeepblue.shinyapps.io/world_population_explorer/

The dataset used to generate the Shiny app can be found in [5].

If the world were 100 people 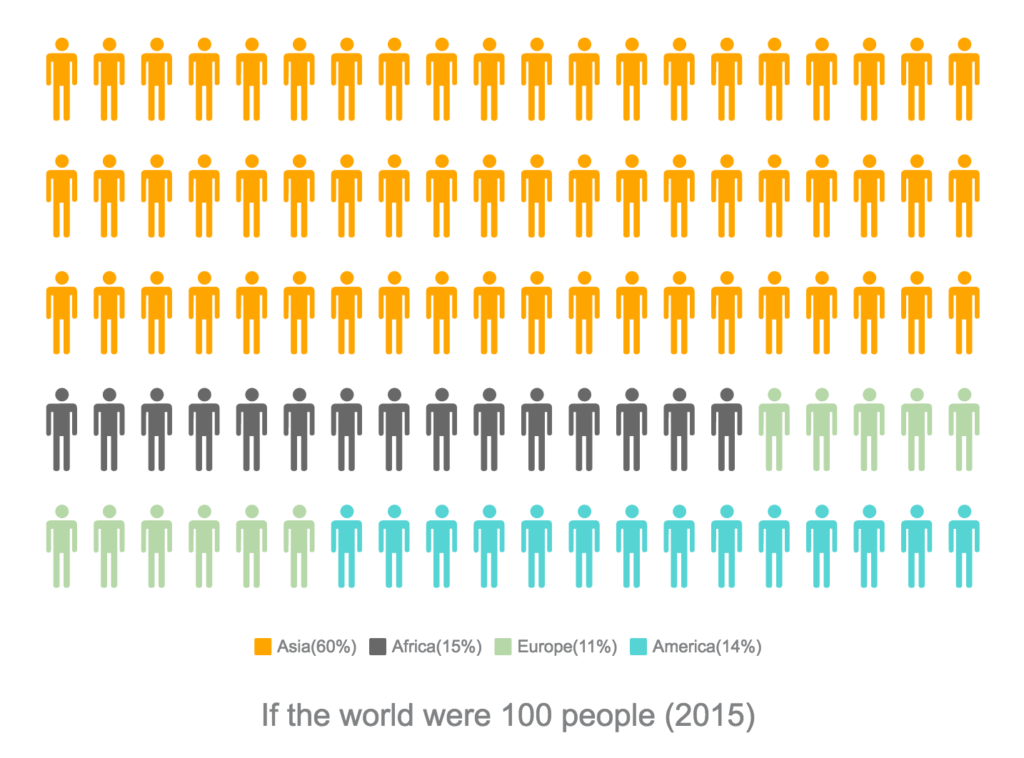 75% of the earth is covered by ocean, and only a portion of the remaining 25% of all lands are habitable for humans to live and flourish. Overall, the distribution of the population in the world is largely affected by various factors, including the territorial landscape, geographic environment, and regional economic level, etc. Our mother planet, superimposed with population across all 232 countries/regions is shown below.

All men are created equal, but not all regions where men live develop equally: 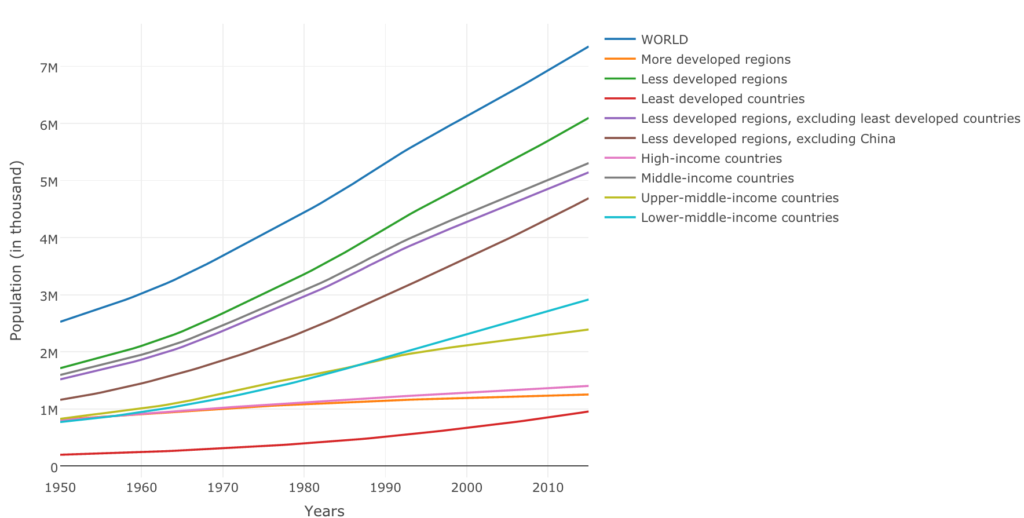 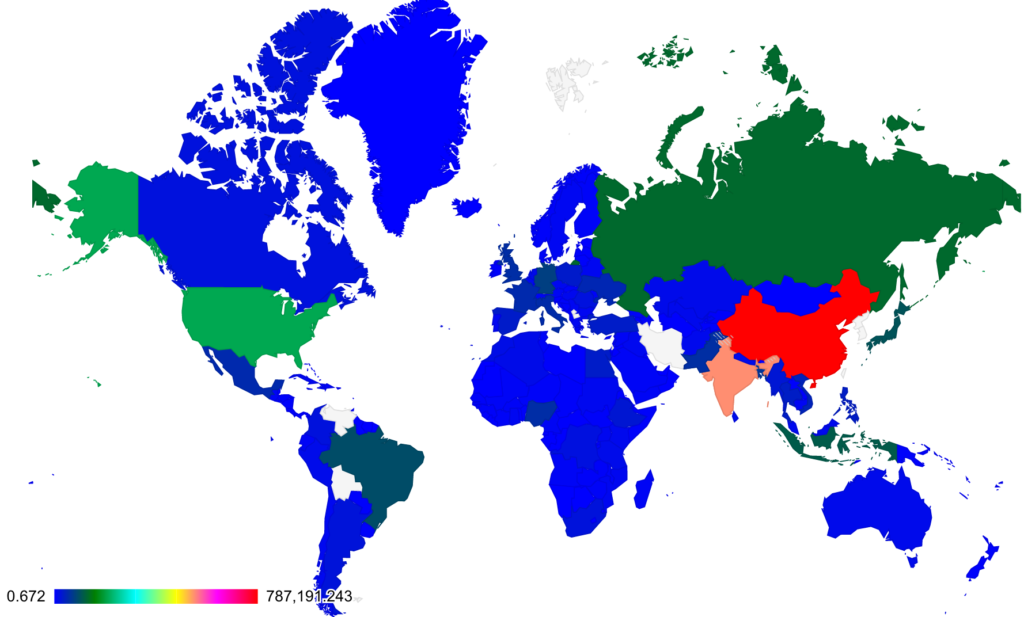 Milestones by the billions

Asia is the most populous continent, and the Asian population is equivalent to more than half of the world population. We are especially interested in looking at eastern and southern Asia because China and India are the world’s two most populated countries. They together contributed around 37% of the world’s population in 2015.

China and Japan are two of the most populous regions in eastern Asia, but from the visualization, China shows larger growth than that of Japan. 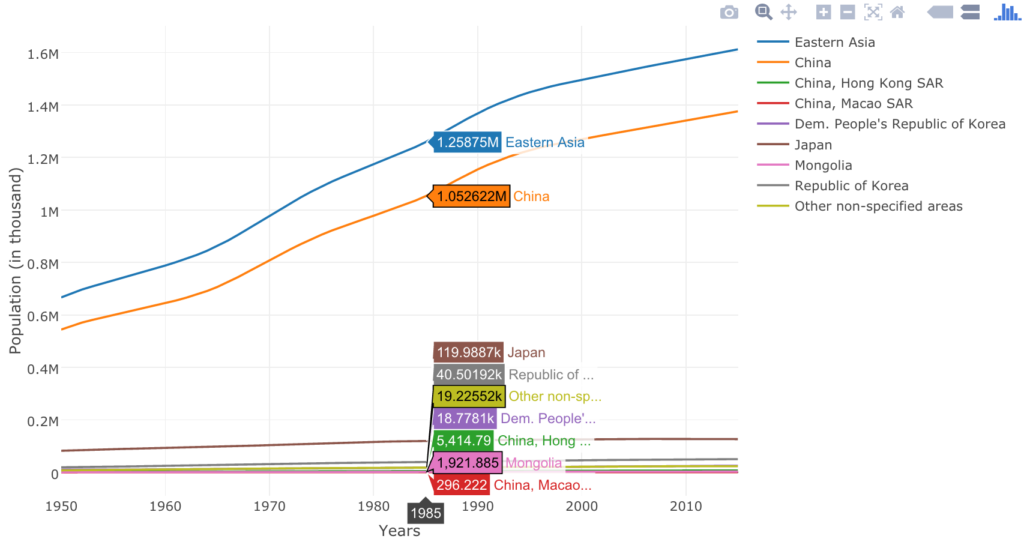 Overall, the curve of China is increasing over the last 60 years since 1950. But when looking closely into the curve, we may find the increase is not at the same speed.

It is not hard to notice that there were three subtle "valleys" along the population curve of China between 1960 and 1990. From the Yearly Population Growth Rate plot, we see three major drops in population growth rate around 1959, 1972, and 1988, caused by Great Leap Forward, Cultural Revolution, and the one-child policy, respectively.

As developed countries, Japan and Korea do not have a large population base, and there is no sign of large increases in either country. 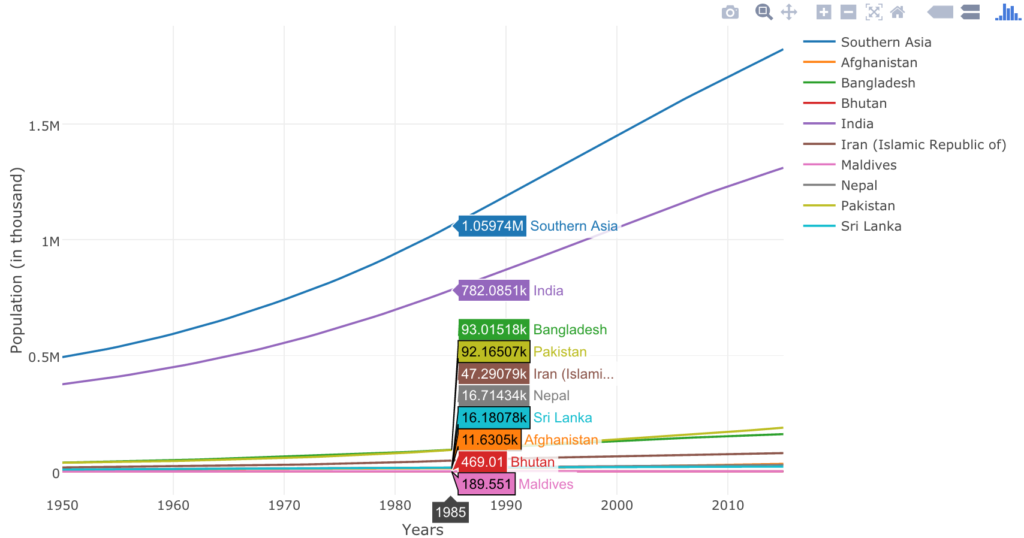 In Northern America, the USA has the largest population, and Canada is the second runner. The population of Canada has a constant speed of growth, whereas the population of US had subtle "valleys" over the last 60 years, indicating an unstable growth rate. 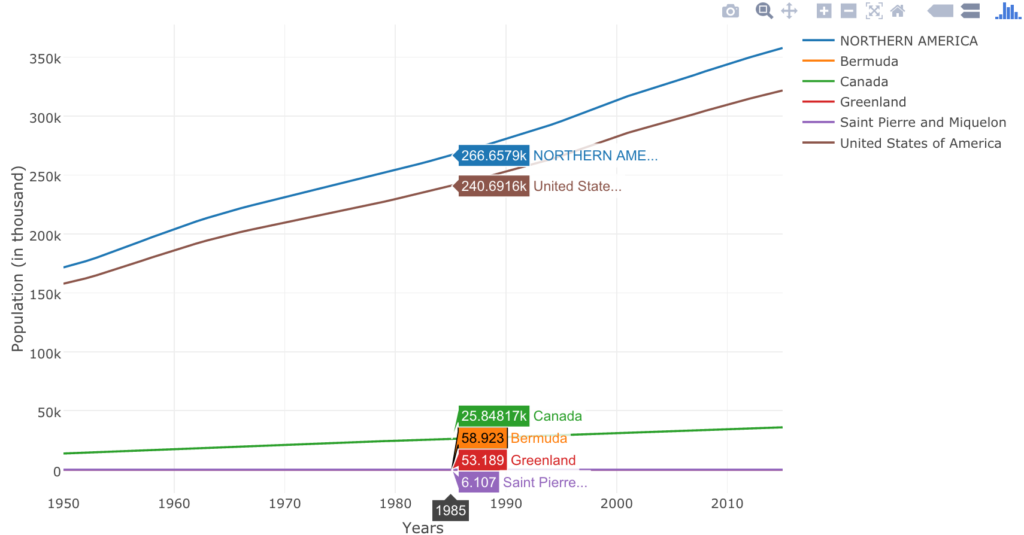 In 1985, Indonesia surpassed the Russian Federation, and ranked 4th in the ladder. Germany, UK, and Italy were all squeezed out by Bangladesh, Pakistan, and Nigeria.

In 2015, Mexico kicked in, leaving Japan out of the top 10. China, India, and US remained the top 3. Surprisingly, the population of Russian only increased by 481,150 people from 1985 to 2005. But digging into Russian history in the past 20 years, we know the root cause: dissolution of the Soviet Union.

Should we worry about overpopulation?

The good news is that, globally, the population growth rate has been steadily declining from its peak of 2.19% in 1963. Nevertheless, growth remains high in Latin America, the Middle East, and Sub-Saharan Africa [4], and no one can exactly foresee what the future population will be.

Based on the visualization of this Shiny project, the following conclusions can be drawn: