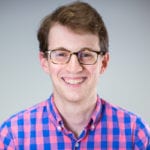 Christian Holmes is a graduate of Middlebury College with a B.A. in Economics and Chemistry. After graduating, he spent two years as a data analyst at an advertising technology startup where he became interested in predictive analytics. He is fascinated by quantitative approaches to crime, transportation, and finance, and loves trying to understand why humans consistently make irrational decisions. During his time at NYC Data Science Academy, he has focused mainly on applying big data analysis to areas where it can be used to improve public welfare (such as increasing donations to charity). In his free time, he enjoys both watching and performing improvisational comedy, and is trying to learn to cook something more complicated than burritos.