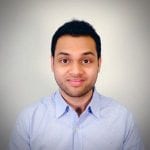 Sricharan Maddineni was a Neuroscience undergrad at Rutgers university. He is a professional music producer turned Data Scientist who has worked with major artists like Kid Ink, Dj Mustard, BMG and garnered over 18 million plays. He has expertise in Data Visualization and is currently delving into Machine Learning with an interest in neural nets. He is extremely passionate about using data to tell a story and gain counter-intuitive insights. As a young entrepreneur, he co-founded an instrumental discovery platform for independent artists and producers called Tenuto which is in the process of being acquired by Beatstars.com. He believes in company culture and is very active on Twitter where he is followed by prominent tech figures and recording artists. Sri has a broad range of interests including healthcare, astronomy, technology, history, film and music.