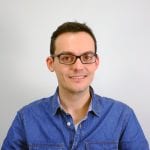 Thomas holds a PhD in pure Mathematics from Paris, and started to pick up an interest for Machine Learning while still a Postdoc at Basel University. After spending a few years in academia, he decided to join NYC Data Science Academy where he became fluent in Python and R by working on both personal and team projects. Enjoying to work on the technical side, he designed a Neural Network that implements the stochastic gradient descent algorithm to solve an imbalanced classification problem for a Kaggle competition. As a researcher in Mathematics, his expertise was in Analysis of PDEs with focus on equations that arise in Physics through abstract mathematical tools such as Functional and Harmonic Analysis. Funded by the E.N.S. Cachan and the Swiss National Science Foundation he published very well received scientific papers on the biharmonic and fractional Schrödinger equations.