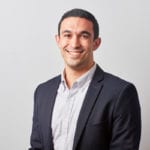 Andrew graduated from the University of California, Santa Barbara with a double major in Statistical Science and English. He previously worked at an adtech company where he learned the ins and outs of big data using Hadoop, Python, and SQL. At NYC Data Science Academy, he teamed up with classmates to build a Yelp recommendation system for his capstone project. Andrew consistently works hard to improve his skills on the side, where he built a Twitter bot that tweets out randomly generated lyrics from his favorite band Blink 182. If he’s not studying, you can most likely catch Andrew at the beach surfing, or at any ballpark, cheering for the Dodgers.