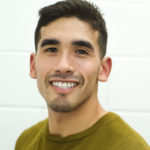 Mark Martinez is a data scientist / data engineer at Jackpocket. He graduated from Harvard in 2014 with a bachelor’s degree in Applied Math and Biology and from Princeton with a masters degree in Computer Science, with an emphasis on computer vision. At Princeton he did research on self-driving cars, and worked specifically on how to create virtual environments used to test and train algorithms used for lane detection and driving. He worked as a data scientist with Johnson and Johnson from 2014-2016 and as a software developer with Square from 2018-2020.