Dollars and Cents – How Money Spent Does (or Does Not) Translate into Wins?

My web-scraping project centered on pulling salary information for professional American football players who play in the National Football League (NFL). The goal of this endeavor was to discern if there was any association between how team spent their money and success in terms of number of wins in a season.

Like many pursuits, the NFL has many intricacies and quirks built up over time.  To understand how the analysis was carried out we will walk through some core game mechanics and roster construction semantics.

How an NFL game is played

There is a third category of players that handle change-of-possession situations that occur after one team has scored or prevented from scoring. This position tranche is referred to as special teams players.

How NFL teams are built

For as many rules there are that govern how the actual games are played, there are just as many if not more that affect how a team is built and maintained. NFL teams face two primary forms of resource constraint, a limit in total number of players and a limit in total money spent on players. The total monetary limit is commonly referred to as the salary cap.

An NFL team can have a maximum of 53 players on its current roster, which is commonly referred to as a team’s active roster.

Generally, players fall into one of three categories, each having different implications of how that player and the team’s monetary obligation to that player are counted in terms of the active roster limit and salary cap, respectively.

Players that can participate in games week to week are a part of a team’s active roster. Active roster players count against the total player limit and the salary cap. Players that are medically unable to play in games, but that team still wants to hold onto can receive a special designation called injured reserve. These players do not count towards the total player limit, but they do count against a team’s salary cap.

Lastly, players who have been released by their team and freely allowed to sign with other teams do not count towards the total player limit but their future guaranteed monies count against the team’s salary cap. For example, if a player was guaranteed to received $100 million over five years at $20 million per year and that player was cut after two years, the remaining $60 million (three years times $20 million) would count against the team’s salary cap for the forthcoming season.

The portion the team’s salary cap occupied by players no longer with the team is referred to as the dead cap. The dead cap is analogous to a cancellation fee on an airline ticket, it’s a penalty for a change in a future commitment.

NFL Player salary information was retrieved from spotrac.com, which is an excellent resource for current and historical salary information for a variety of profession leagues. For example, it includes not only U.S.-based professional leagues such as the NFL and the National Basketball Association (NBA), but also the English Premier League (EPL) for the soccer aficionados. Six years’ player data was pulled starting from 2014 through the most recently completed 2019 season.

NFL player information was aggregated at the individual team level and then converted to relative percentage terms. The reason for the percent conversion – so that the financial information was based upon percent of team total amounts – was due to large escalation in the NFL’s league-wide salary cap over the period examined. From an initial point of $133 million in 2014, the salary cap increased approximately 40 percent to $188 million in 2019. Thus, there is a large year-to-year inflation in monetary spend without a corresponding change in the success metric, number of wins, being analyzed. 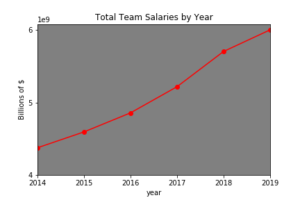 The relative percentages were determined with respect to five roster categories. Three active roster categories were calculated based upon whether the player occupied an offensive, defensive or special teams position. The two remaining roster categories were injured reserve, representing the percent of team’s monetary spend associated with players that are medically unable to play in games, and dead cap, representing the portion of the team’s salary cap that was associated with players that are no longer on the active roster.

NFL win totals were collected from espn.com but can be easily obtained through most major sports website (e.g., nfl.com, foxsports.com).

Sifting Through the Data

A tried-and-true method for getting a feel for the distribution of a numerical-based item is a histogram. Below is histogram for the number of team wins in an individual season for the six years examined 2014 through 2019. 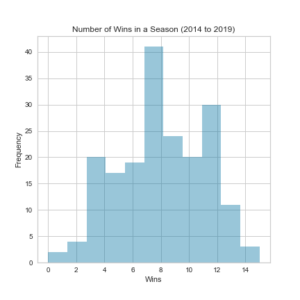 Overall, this a multi-model distribution with a concentration in the 7-to-8 win range and smaller peaks in the 10-to-11 win and 3-4 win territory.

A fact that puts the below plot in context is that there is a total of sixteen games played by every team in one season. The last time a team achieved that vaunted mark was in 2008 by the New England Patriots.

Another flavor of looking at the same population of wins is to look at a split histogram based upon whether the team advanced to the post-season tournament, referred to as the “playoffs.” Through this lens we see that the inflection point between getting into the playoffs versus not tends to be around 10 wins. 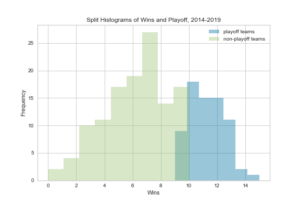 Similarly, a method for examining the universe of possibilities/range of values for multiple values at a given time is a boxplot (sometimes referred to as a box-and-whisker plot). The box portion of the plot is bookended at the bottom and top by the first and third quartile and the line in the middle represents the median value. Median is generally considered to be a more robust measure of centrality than the mean. 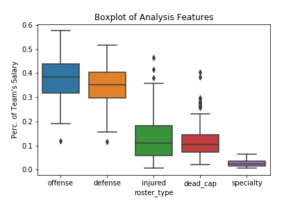 Given that these five categories add up to a hundred percent, this chart helps visualize how a typical teams spends its money: about 40 percent is spent on players on offense, 35 percent roughly on defense, 10 percent each on players on injured reserve and so-called “dead-cap” players and about 5 percent on special teams players.

Some Stats and Some Sense

In order to quantify the relationship between how a team allocates its money and number of wins, a linear regression analysis was performed. The main statistics from the linear model are displayed below. R-square and adjusted R-square reflect how much of the change in the number of wins associated with changes in how a team financial spend is allocated. Given that driving factors examined were purely financial-based and included no game-based metrics (e.g., number of points scored), an R-square of thirty percent appears reasonable.

The two significant features as identified by the linear model were the proportion of team spend associated with players on the injured reserve or so-called dead cap players, individuals no longer with the team but whom still occupy a chunk of the team’s salary cap. A coefficient of negative 11 for injured reserve factor means that there is one less win predicted for every ten percent increase in a team’s salary cap occupied by players who are not medically able to play in games. Similarly, a coefficient of negative 15 means that there is one and a half fewer wins predicated for every ten percent increase in the team’s salary cap associated with players no longer on the team.

While an individual game or two may not seem a large amount in isolation, this number is meaningful in the context of a sport where regular season games a scarce in quantity and that, in the period examined, there was a cluster of teams in the 8-win range on the outside-looking-in of the 10 win line of demarcation for teams that advanced to the post season tournament.

A quick statistics explainer - A p-value is a measure of how likely it is that the number calculated was arrived at by chance. A lower p-value represents a more significant result. The general threshold for significance in statistics is a p-value lower than 5 percent (<.05).

A team is not going to go to the Superbowl purely on the basis of having no injured players or never having any portion of a player’s contract guaranteed in order to be able to them go without consequence with respect to a team’s salary cap, but on the margins this analysis can guide how teams allocate their finite monetary resources.

Thus, a team should try to either i) minimize the amount of guaranteed money for a player or ii) try to reduce the future guaranteed amounts and advance the guaranteed portion of the contract to earlier in the contract life.

In terms of injuries, teams should generally try to shy away from injury-prone players. However, given the violent nature of the sport, it is impossible to avoid injuries all-together. An NFL team should understand the significance of having even a small amount of injuries to its premier players. For example, a team’s top offensive player regularly commands in the 20 to 30 million range and top defensive players average around 16 to 25 million dollars. Therefore, having just one of these top-tier players injured on a team can represent fewer games won. Some players that have this level of monetary heft are Aaron Rodgers of the Green Bay Packers at $30 million and Von Miller of the Denver Broncos at $25 million.

Other than avoiding spending money on players that are not on the active roster either by means of injury of being let go by the team, the analysis performed does not provide any strong evidence that spending more or less on offensive, defense or special teams players is associated with a change in win total. It may be the case that examination at a more granular level (e.g., individual positions such as quarterback or defensive end) could manifest a relationship that was masked when analyzed at more aggregate level.

View all posts by Jason Wattier >