Mental health is an issue that has recently come into the spotlight in mainstream media data here in the United States.  It is a multi-sector issue that involves healthcare professionals, all branches of the government, and expands to patients, caregivers, and family members.  It impacts all facets of the workplace and everyone who is on social media.

I wanted to dive in and take a look at the hard numbers and see the story the data was telling.  "Is it an issue?", "Just how bad is it?", "Is it only impacting the United States?", these were some of the few questions that came to light when first thinking of this topic.

My goals were twofold for this analysis:

Therefore, I filtered the data accordingly:

Initially, I wanted to take a wide-angle lens approach and see everything on a macro level: 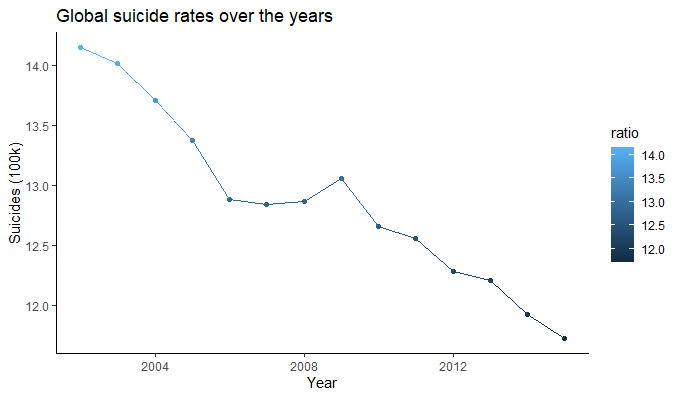 This is what we hoped for but looks too good to be true.

How is the spread of the data for each country? 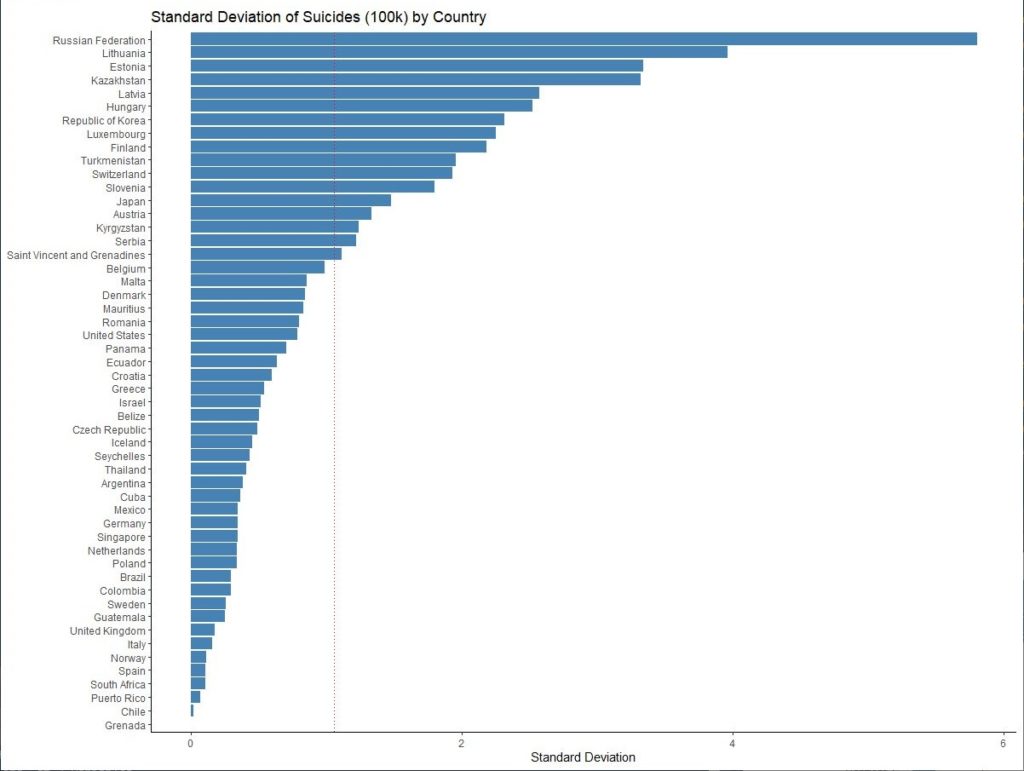 It looks pretty wide in a decent chunk of the countries. 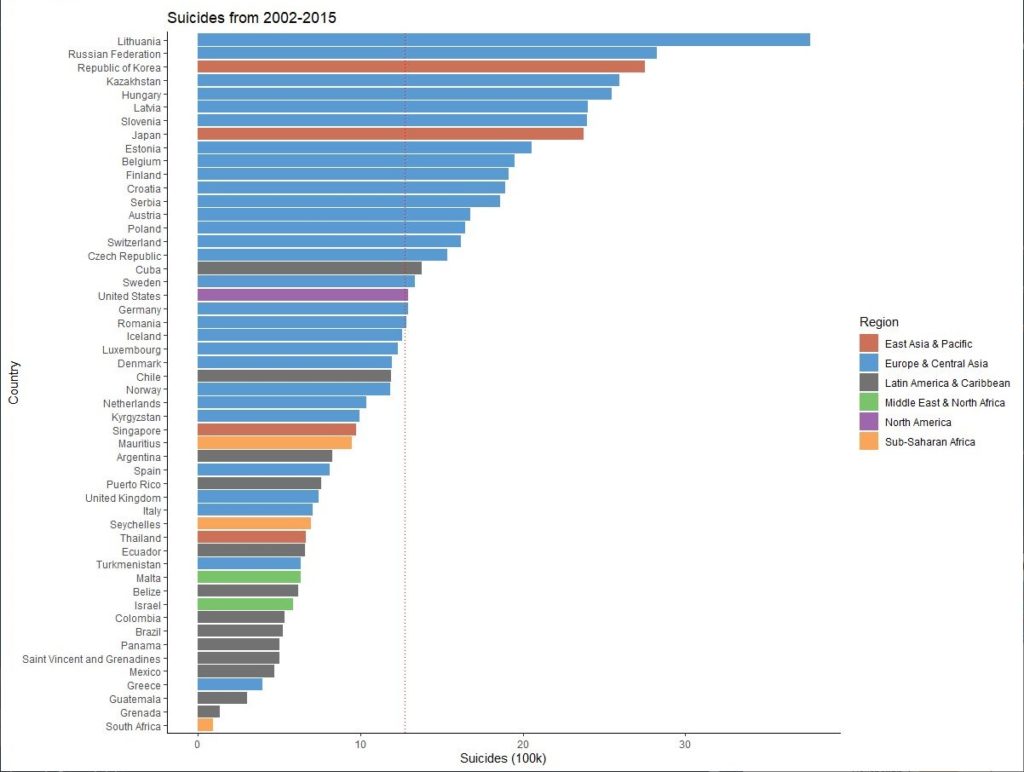 This chart doesn't seem to say much but does highlight Europe & Central Asia being a bulk of the highest suicide rates for this period. 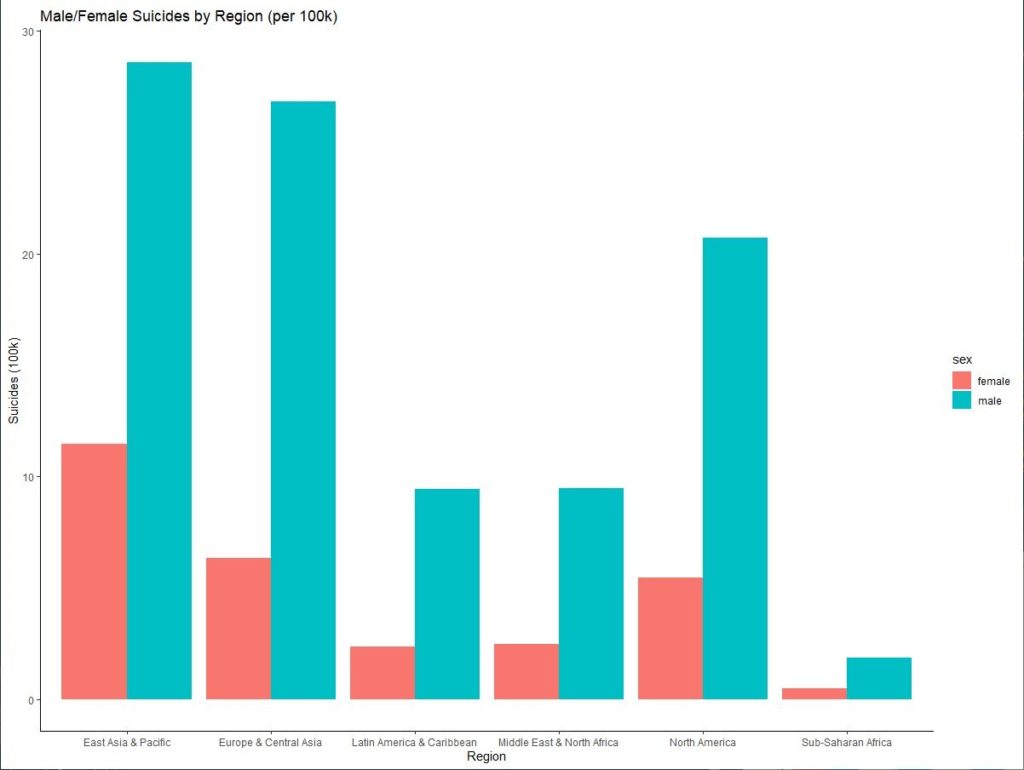 Looks like there's a trend toward Males being more prone to suicide than females.

Is there a better way to visualize this? 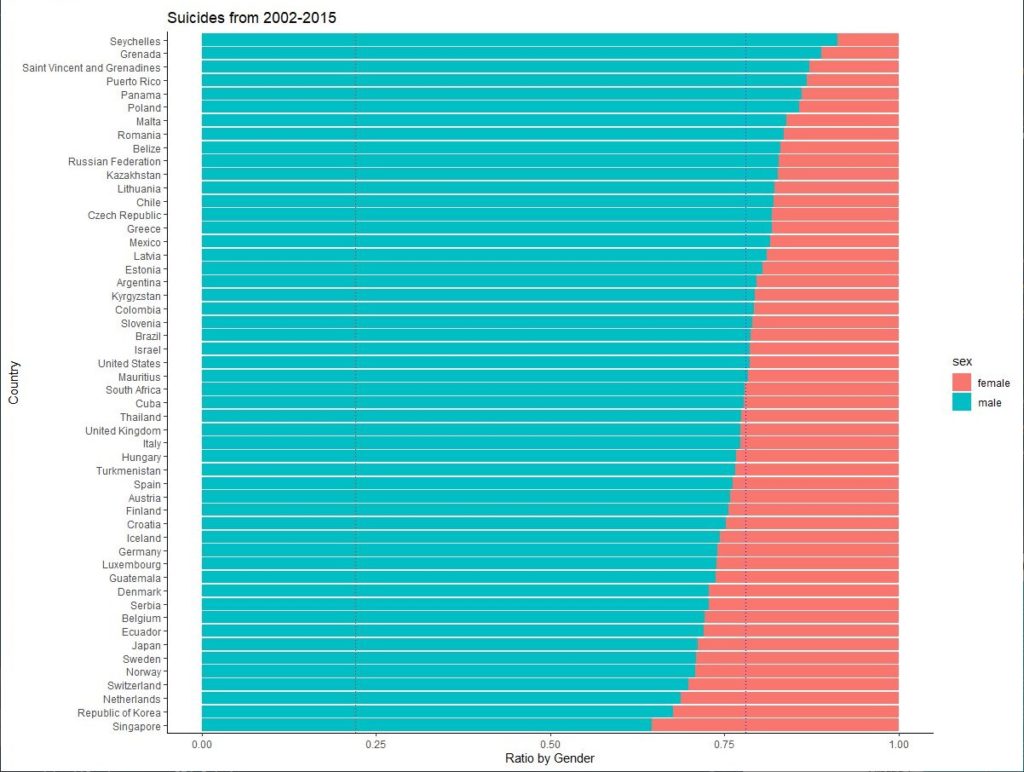 Yes, this chart beautifully illustrates the ratio split by gender.  Note the 2 lines representing the average for females on left and males on the right. 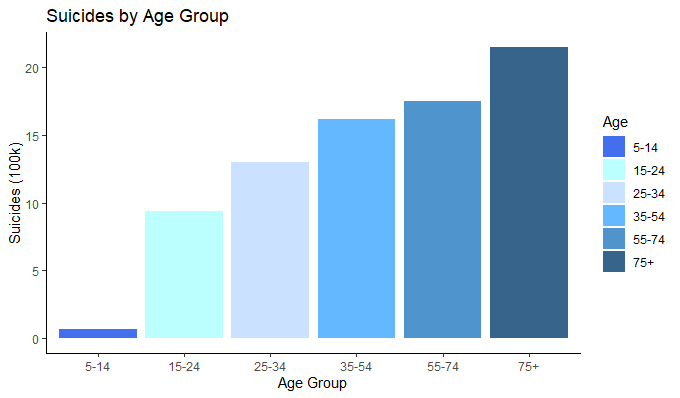 A disturbing chart that illustrates that elderly age brackets are at higher risk for suicide than younger age groups.

This made me think, what if we evaluate generations instead of just age groups? 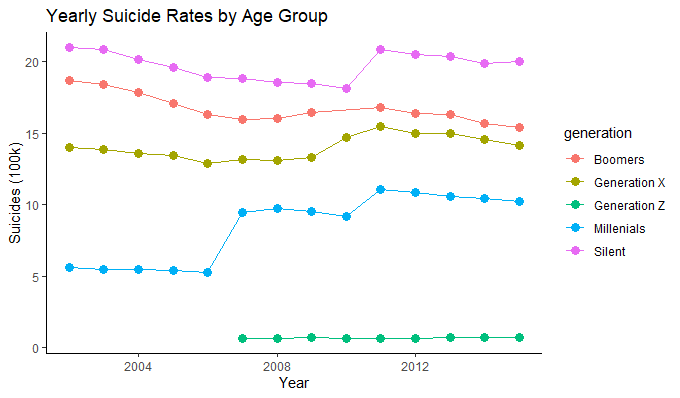 Nothing eye-opening here.  This shows what I was expecting which was the oldest generation groups have higher rates and the youngest have the lowest.  I don't really see rates increasing or decreasing by a large amount.  (Note Silent is the generation prior to the Boomers)

Adding GDP into the equation 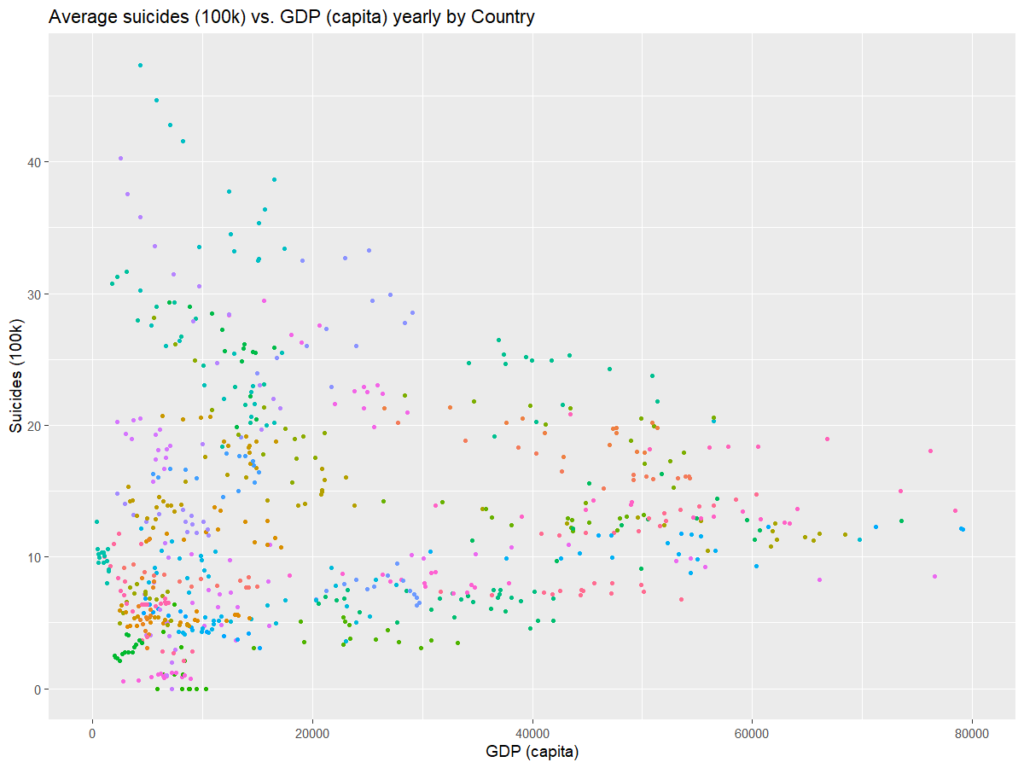 Would expect some correlation here but it looks like there isn't much correlation.  My guess is the wealthier nations don't seem to have a great impact on the suicide rates. 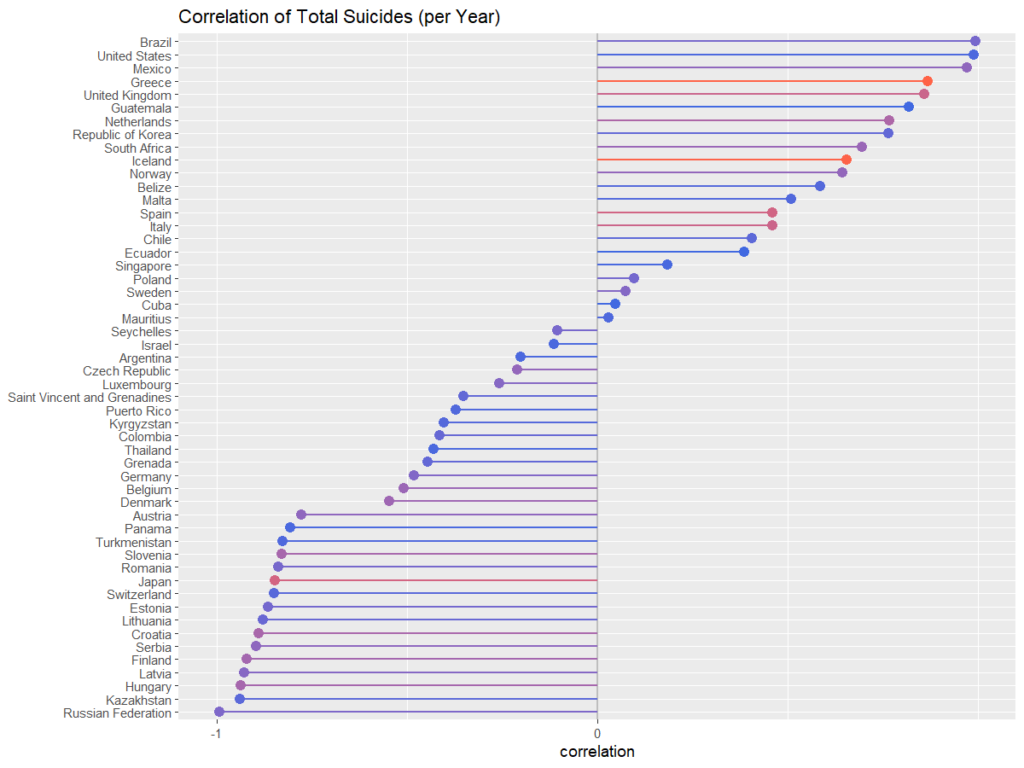 I thought correlation would be the best way to tackle finding the outliers that were showing increasing suicide rates vs the first chart where we saw a decreasing trend of suicides globally.  This chart illustrates a clear visual representation of that. 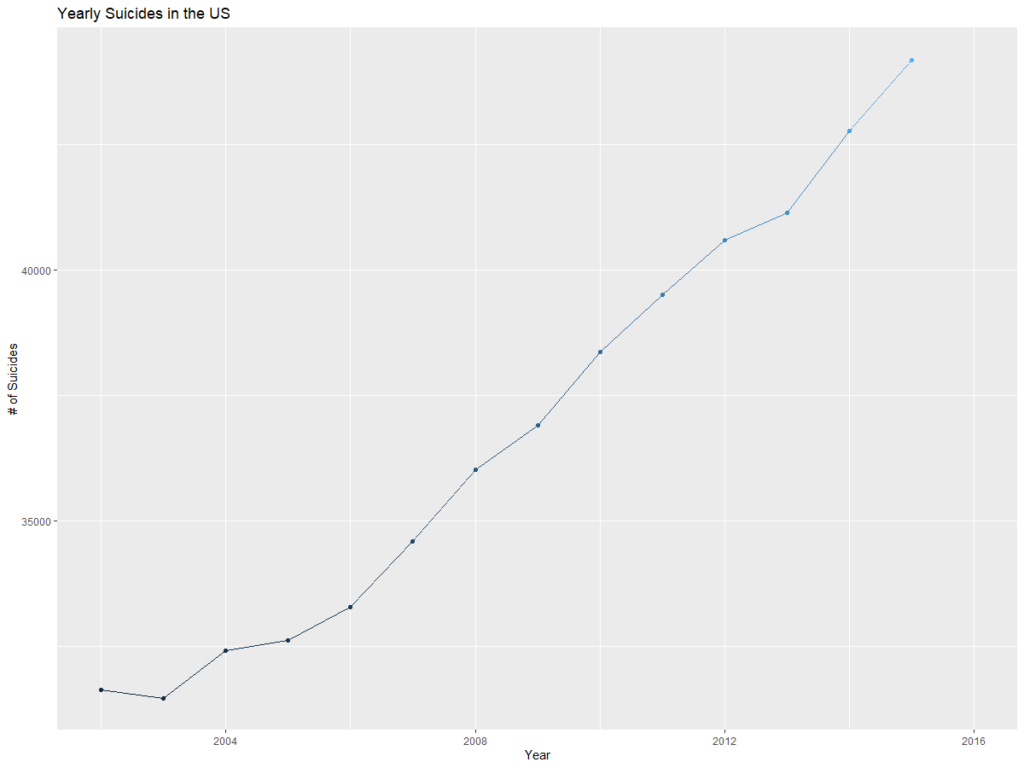 It definitely looks like the U.S has an increasing trend for suicides throughout this period. 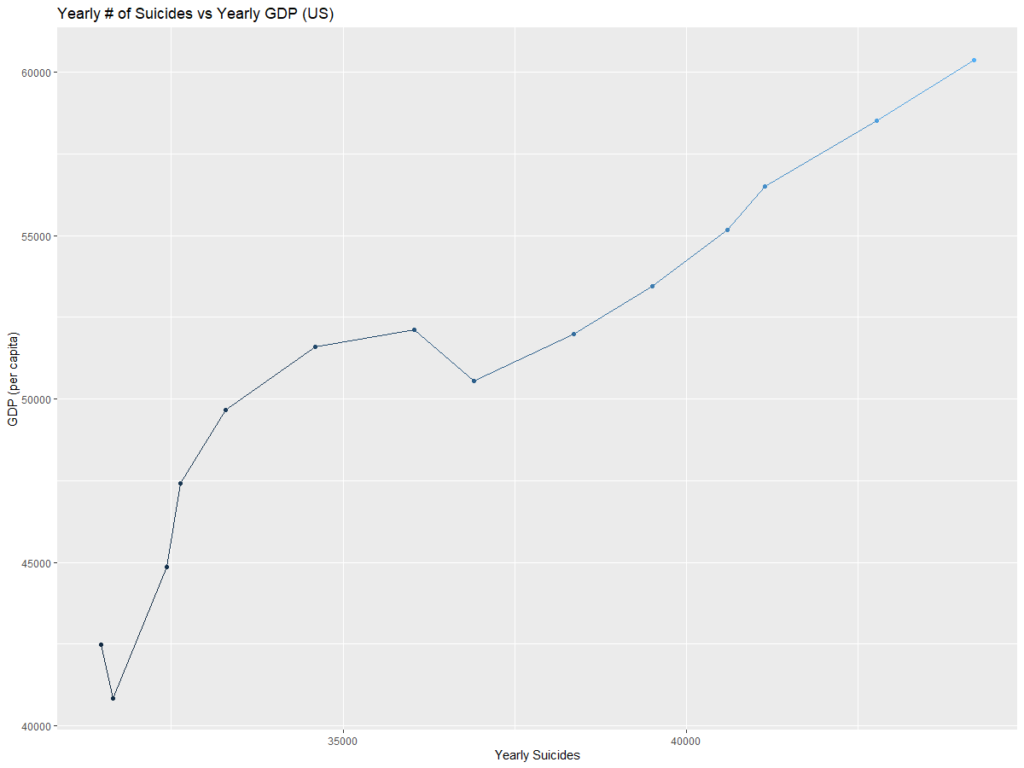 as the country got richer and had more resources, the numbers still increased. 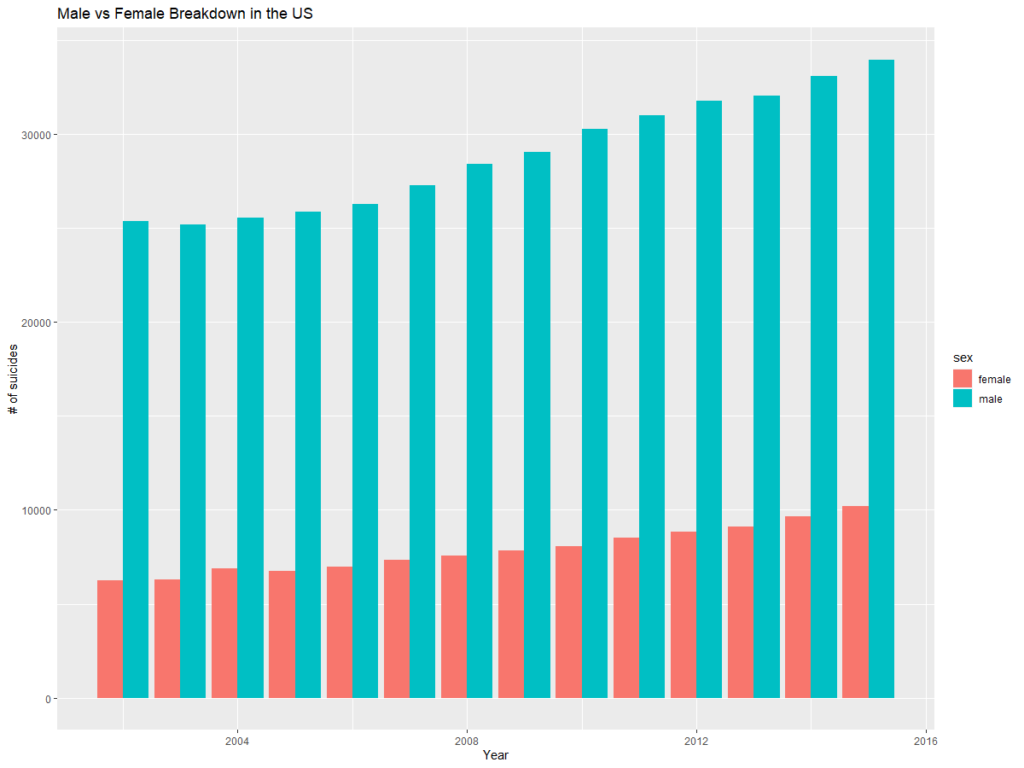 A slight rise overall for both males and females but the ratio seems somewhat consistent. 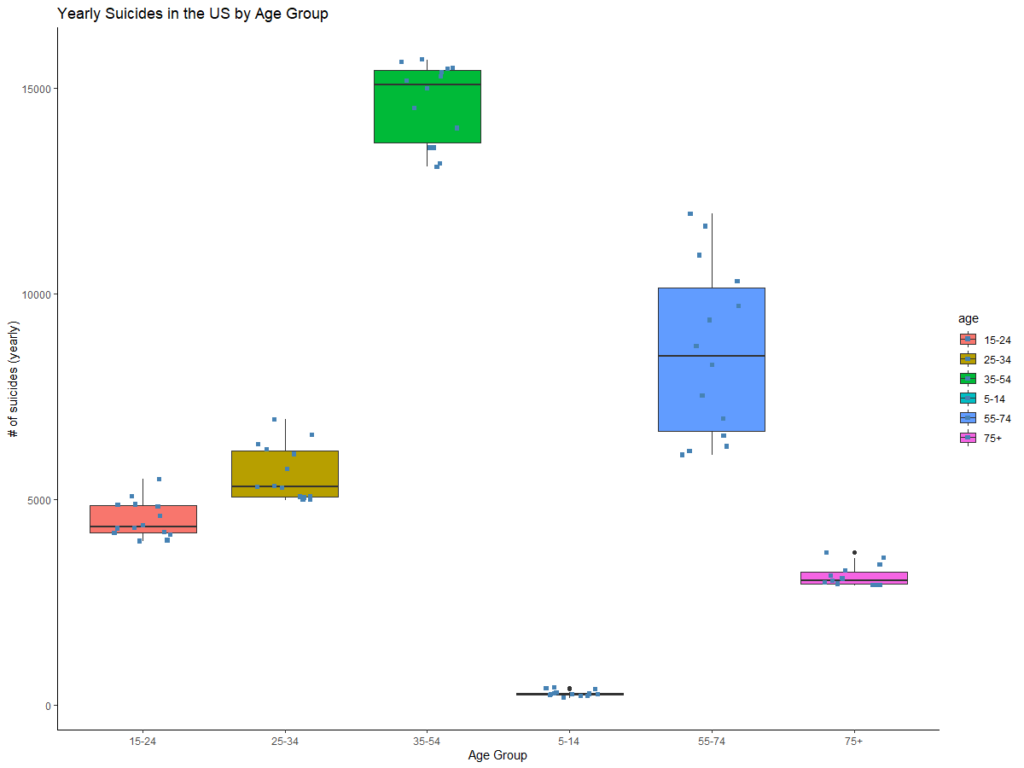 The most disturbing chart for me is this one.  Remember we saw that the older age groups were higher risk to suicide? According to this chart, in the U.S it's actually the 35-54 year old category.

From the analysis shown, we can infer the following:

I feel that this is the first step in the right direction to better understand suicide rates and the mental health crisis.  I just wish there were more years of data that we had available from all countries for a more conducive analysis.

To highlight some of the issues I encountered:

I would love to eventually revisit, rethink, and add to this project.  I feel these were some future thoughts worth considering:

This could be used to help build a predictive model with factors to predict future trends in suicide.  The factor weights can be used to better understand which facets impact mental health the most.  This could eventually be used as an effective tool to help combat this issue.

If you or anyone you know needs help: