Starbucks is one of the biggest coffee brands in the world. Since founded in 1971 in Seattle, Washington, it has been constantly growing and now has more than 22,519 stores worldwide (starbuscks.com). The purpose of this project is to understand the underlying logic of Starbucks store opening strategy using data, so as to extract transferable insights for other similar brands.

The primary data set is from Kaggle.com, containing 25,600 Starbucks store location information in 73 countries and areas. The data set was collected in February, 2017. Four additional data sets are also included for a complete analysis, including world country GDP, population, corruption index and country code.  The shiny app is here.

The Starbucks store location data set includes 25,600 rows of data, each indicates a unique store information. All these stores are located in 73 countries in six continents, which are North America, South America, Europe, Asia, Africa and Oceania. In United State alone, there are 13608 stores running in year 2017, constitutes over 53% of the total store counts, making North America the top 1 market for Starbucks brand. 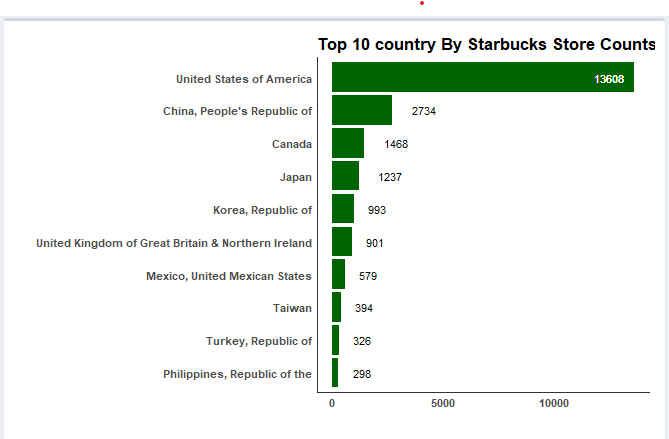 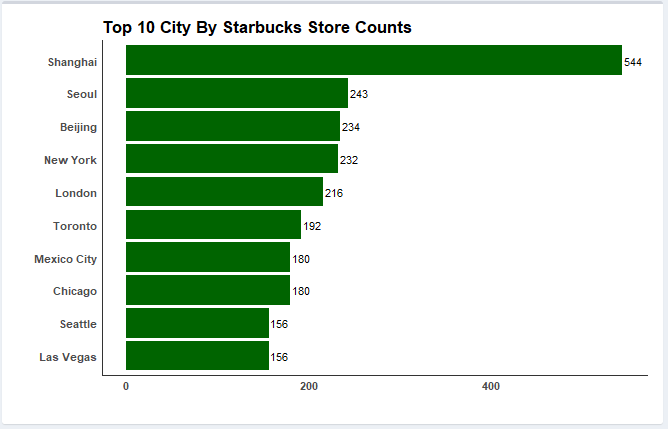 However, using absolute store count can be influenced by the country size and population. Therefore, a store density metric may be more accurate when measuring how heavily Starbucks investigate in certain area. In this analysis, the number of population served by 1 store (population in thousand/store number) is calculated and used. The result turns out that only 4 of the Top 10 countries have high absolute store counts. The other are all high population density countries or tourist destination. 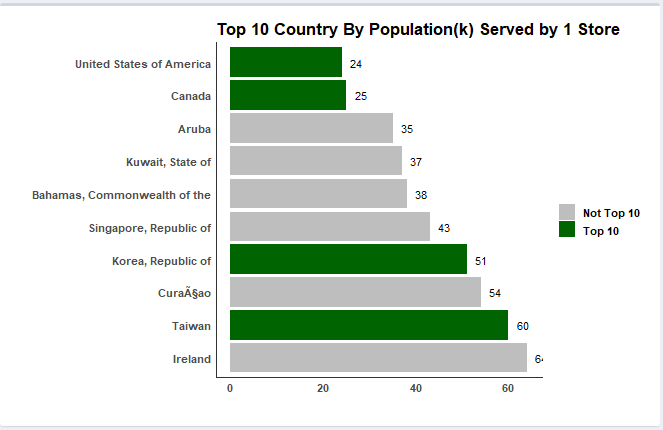 When considering whether or not to enter a foreign market and make heavy investment in business, one thing every company must consider is the economic status of the local country. Therefore, GDP and population data are something need to look at. When measuring the difference between GDP, population, and GDP Per Capita, countries that have Starbucks stores and those don’t show distinction in all three metrics.  Basically, the average GDP, population, and GDP Per Capita of those countries don’t have a Starbucks stores are all lower than those counties has at least one Starbucks stores, indicating that Starbucks store favors those areas of better economic status. 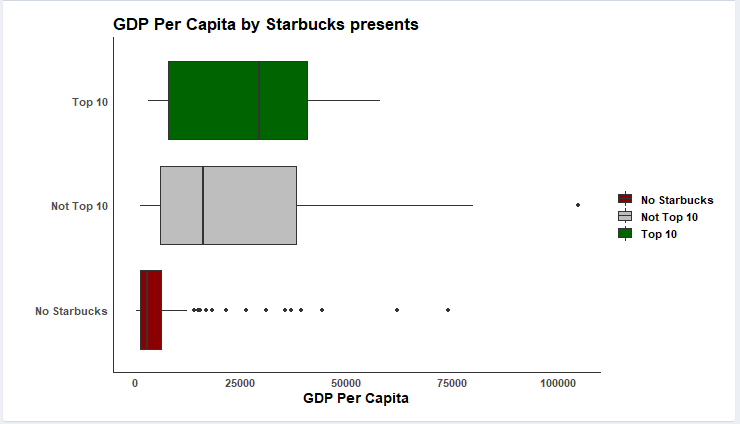 Note: Outliers are excluded in the GDP graph (USA and China), and in the population graph (China and India)

Even though, there are quite a few outliers exist in the country group that has no Starbucks stores: these countries have a GDP Per Capita higher than that of those counties have Starbucks stores, but there is no store opened in the area. To take a closer look at the outliers, I pulled the names of those outlier countries and did a manual search on Google. It turned out that by 2020, 3 years after the data was collected, 7 out of the 14 countries now have at least 1 Starbucks. Starbucks is not really neglecting these countries, they still try to enter all the countries who are economically superior, only it takes time. 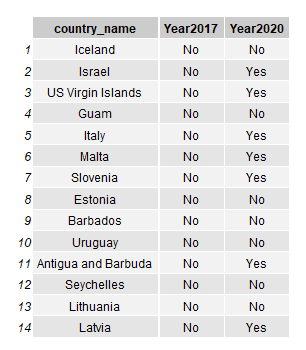 The next step I’m trying to find a quantitative relationship between the store number and the economic indicators. Again, the store density metric is used instead of the absolute store count, so as to eliminate the influence on country size and population. 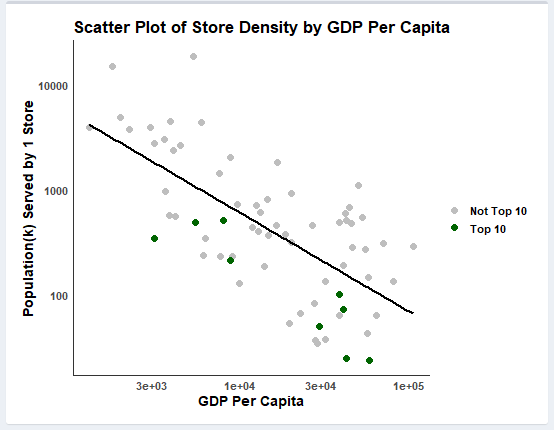 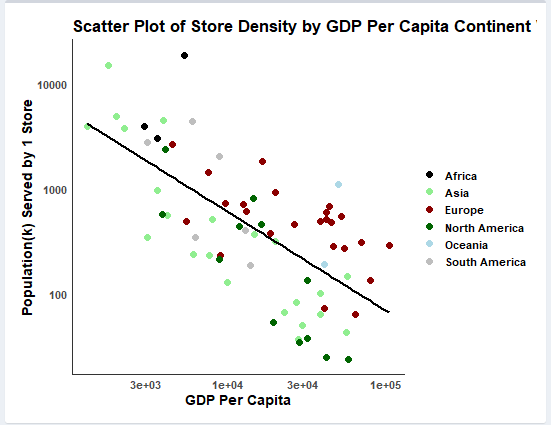 When color-coded the scatter plot and add an extra dimension of continent information, another interesting pattern can be spotted from the plot. The Asian countries are mostly clustered below the regression line, whereas the European countries all sit above the line. This indicates that in countries of similar GDP Per Capita, Starbucks tends to open more store in Asia, and less store in Europe, after controlling the effect of population.

One possible explanation might be the coffee drinking history and culture in the two continents. In Asia, coffee is a relatively new beverage and people traditionally don’t drink it, so it is easier for Starbucks to enter the market and earn more share with less effort. However, in Europe, many countries already have a history and culture of coffee drinking, which makes it harder for Starbucks to join the competition.

Going back to the outlier countries in the boxplot of GDP, population and GDP Per Capita, Italy is the only country that has higher economic performance than the average of those countries already have a Starbucks, however the first Starbucks store opened after year 2017. It is probably because the coffee culture in Italy is very profound, so Starbucks need to be fully prepared before opening a store there.

There are 4 types of ownership among the 25,600 individual Starbucks stores in the world, except for Company Owned, there are also Franchise, Joint Venture and Licensed. From company perspective, it must be favored to have everything owned by the company alone, so they can have all the revenue and make it easier for the business operation – unless there is some benefits or obligation with other type of ownership.  One possible influence could be the country corruption index, which reflect how easy to do business in a certain country. But when looking at the average index alone at continent level, it is hard for us to notice any pattern. 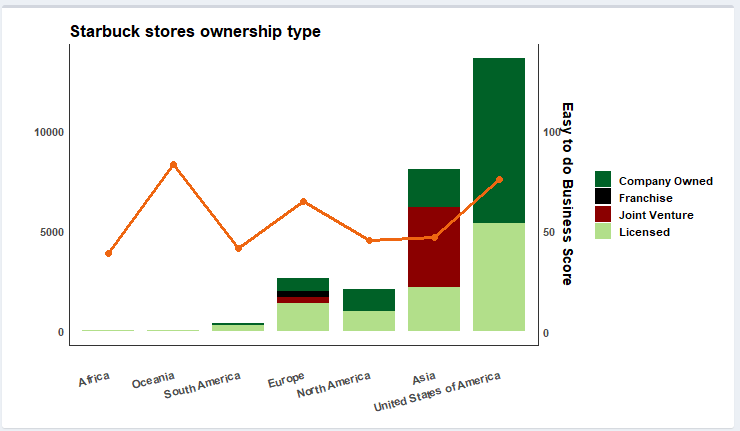 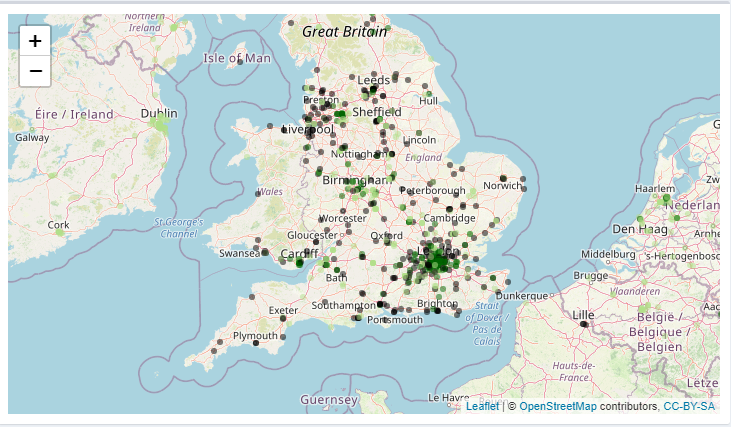 When looking at the store map of United Kingdom, an interesting pattern can be spotted easily. Every dot in the map represent an individual store, the dark green color represent company owned stores, black is franchise stores and light green is licensed stores. In the map, the dark green dots of those company owned stores are mostly clustering in London city, while the black and light green dots are more spread out over the country. This suggests there might be different expansion logics associate with different types of ownership.

The opening of company owned stores depends on the Starbucks company --- after making adequate market research, the company launches a new store in a new area. It is more naturally they will focus on the big metropolitan areas, since population density are higher so as the household income. But in the vast majority of the world, Starbucks offer this opportunity for anyone or companies who think they see a chance of making profit from a Starbucks store to apply for a partnership. Therefore, they don’t need to spend too much energy on researching but always be able to open more stores.

This dynamic may vary from place to place. Conclusions need more data support and analysis.

Average Distance Between Stores in City

On city level, store number may not be an accurate indicator since the area of each city in the world can vary drastically. To measure the store density again, I calculated the average distance between any stores in a city where exist more than 15 stores. It turns out that New York City in the city with the highest Starbucks store density in the world, on average for every 2.3 miles you walk, you will see another Starbucks shops. 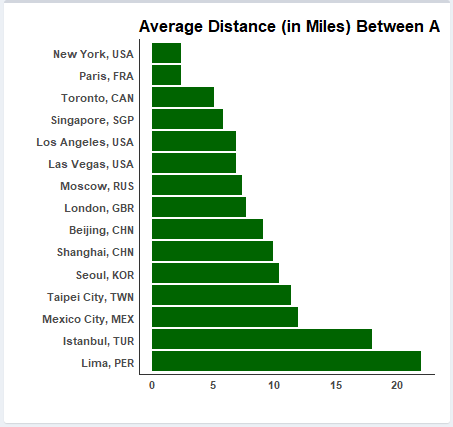 Despite all other factors, this metric may help us to spot the city with a potential to open more stores: if any city or local neighborhood have a similar coffee-drinking population density, this average store distance may be treated as a growth goal for Starbucks.

M.S of Education from University of Pennsylvania
View all posts by Chun Tao >