The Billboard Hot 100 is a famous popular music ranking chart that is widely known and whose highest ranks many artists strive to attain. Furthermore, data has shown that Billboard Hot 100 ranking also correlates with song popularity, since the calculation of rank includes listens from music streaming services, album sales, radio plays, etc. Thus, the Billboard Hot 100 rank is a great thing to try and predict based on song attributes, and successfully doing this would have natural appeal to those trying to make a 'chart-topping' hit song!

What characteristics of songs are we looking for? Without using a complicated song property decomposition algorithm, we would have to use keywords or graded properties associated with each song, collected in some database. Luckily, Spotify has a Developer's API that allows us to piggyback off of their massive database of songs and song properties.

With the data that Spotify collects for the songs, we can see as a proof of concept, if the song attributes can be used to predict the song popularity. We can find if there are correlations in the Top Ranking songs (Songs that have entered the Top 3, at any time on the charts), and their song properties according to the Spotify algorithm. We can then compare this over time, to see if the Top Songs have characteristics that change over time. 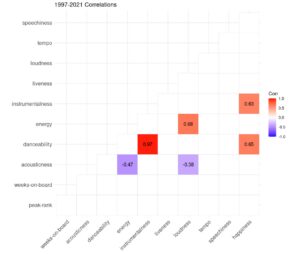 We calculated the correlation matrices for the various song statistics (they were already standardized between 0-100, therefore we normalize them to 0-1 for convenience). We show in the above chart, only the most significant correlations. The correlations were dropped based on a p-value from a Pearson's two-sided test, with a threshold of p < .003.

Thus, the remaining correlations should be those that are statistically significant. While there are clearly correlations to the song properties, what was unfortunately uncorrelated were the peak-rank, and the weeks-on-board to any of the other features. 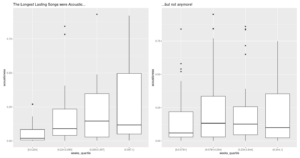 Looking at the songs before 2010 (above left), and the songs after 2010 (above right) we can see that the acousticness of the song used to clearly dictate the length it would last on the Billboard (with acoustic songs lasting consistently longer on the charts than all other chart topper categories). On a slight tangent, the durability of acoustic songs on the charts may seem surprising given their relatively small size compared to non-acoustic pop songs.

However, the longest lasting chart toppers are often Christmas songs, which rank highly in acoustics, and also acoustic songs tend to last for their emotional resonance or lyrical resonance, and therefore stay on the charts (even at the lower ranks) much longer than other more popular songs that fly to the top of the charts, stay at the peak for a few weeks, and then fade away just as fast into obscurity  However, we can see that this trend does not continue into the 2010's, with more acoustic songs occupying less time overall on the Billboard ranking.

The Two Upper correlation charts describe the period after 2010 for the Billboard Top 3. We can see that weeks-on-board was correlated with Acousticness, as we discussed earlier. We also see that this trend ceased as the years moved on, and it became more typical that the acoustic songs were not as instrumental, and were generally of a sad tone. This we can deduce, since the acoustic songs that are present in the Top 3 are anti-correlated with Energy, Dancability, Loudness, and Happiness most consistently. On the other hand, we have extremely Dancable, Loud songs that also consistently appear in the Billboard Top 100

We can take away from this that the approach of using the Spotify API to analyze chart-toppers is a valid and fruitful one. While this approach has allowed a great deal of analysis, we are not yet at the stage where we can, based on analyzing a song on Spotify, predict if it will be a Chart-Topper or not.

To do that, we must do further analysis on songs that did not reach very highly on the charts, and those songs that did not break the charts at all but were trying to. Further applications of this could be to systematically analyze the song-taste of different consensus agents--like music reviewers, magazines, or tastemaker websites in order to analyze whether or not a song would be a hit to that particular audience/taste.