Analyzing Data Energy Use and Gas Emissions of NYC Buildings

Using data, New York City has already seen a preview of the effects of climate change, from superstorms to increasing number of days with extreme heat. However, the city is also uniquely poised to lead the fight against climate change in the US. NYC has pledged to become carbon neutral by 2050, meaning that its greenhouse gas (GHG) emissions will be equal to the amount of GHGs it can negate.

More than half of the city’s GHG emissions are produced by the electricity and fossil fuels used to heat and power buildings. This sector will need to cut emissions drastically in order to reach net zero. This exploratory data analysis seeks to analyze current energy use in New York City’s buildings and search for trends and patterns to help determine a path forward.

Local laws require that all buildings over 25,000 square feet--and city-owned buildings over 10,000 square feet--report each year on their energy and water use. This data is publicly available on NYC Open Data. The datasets used in this analysis consist of building data for the calendar years 2020 and 2019. Approximately 29,000 buildings are included in each dataset. While this makes up a fraction of NYC’s approximately one million buildings these are the largest buildings in the city by square footage. As they contribute about 61% of all emissions from buildings in NYC, they represent a good place to start.

I began my analysis with the 2020 dataset, since it was the most recent available dataset. However, as in many industries, 2020 was an unusual year for building operations. Compared to the 2019 dataset, the total GHG emissions were approximately 19.7% lower in 2020 than 2019. The following graph shows the breakdown in GHG emissions by borough. 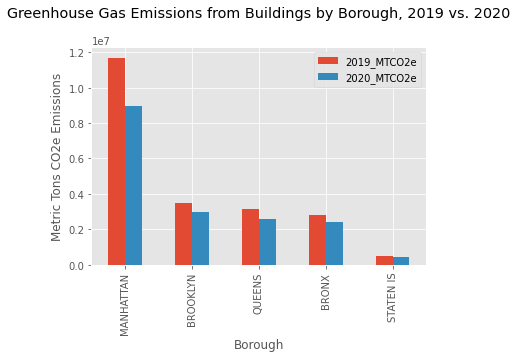 Figure 1: Comparing Greenhouse Gas Emissions from buildings by borough and by year

Manhattan saw the greatest decrease, with 23% lower emissions in 2020. The Bronx and Brooklyn saw the smallest decrease, with about 13.5% lower emissions in 2020. It’s possible that NYC saw true decreases in GHG emissions during the initial wave of the Covid-19 pandemic. It’s also possible that some of the GHG emissions were shifted from larger buildings included in the dataset to smaller residential buildings not included in the dataset. It will be interesting to see how emissions trended in 2021 as the city revved back up.

I checked for correlation between factors such as year the building was built and Energy Use Intensity, measured in kBtu/square foot. No correlation was found, suggesting that there is not a significant difference in energy efficiency between buildings built in different years.

The chart below shows the property types contributing the most to greenhouse gas emissions in NYC. Multifamily housing and office buildings were the biggest contributors by far, suggesting they will be good targets for emissions reductions regulations and incentives.

New York City’s rooftop solar energy potential may be more limited than less densely built-up areas, and only 86 out of the  29,000 buildings in the dataset have solar panels. Roof space is limited, but it still seems NYC is not maximizing its solar energy potential. I decided to estimate how much green power could be generated if buildings of the same property type generated electricity at the same rate as the current green power producers.

Only five property use types had at least three data points, so I only looked at those five types (shown in the graph above). I estimated that approximately 4.26 terawatt-hours of electricity could be produced annually, which is close to 8% of NYC’s annual electricity use! It should be noted that rooftop square footage was not included in the dataset. Total building square footage is a useful but not totally accurate metric to use instead, since many NYC buildings are high rises with relatively low rooftop to gross square footage. The chart below shows the power generation potential of the five building types.

Each entry in the dataset also includes the building’s Site EUI, or Energy Use Intensity, measured in kBtu/square foot. It is the amount of energy used per square foot for a building, and is useful to be able to compare the energy efficiency of buildings of different sizes. It is also useful to be able to benchmark against other similar types of buildings. Energy Star has calculated a list of median EUIs for different property types.

I used the 2019 dataset for this analysis since the 2020 data was so affected by the pandemic. Overall, the buildings in the dataset were well above the Energy Star national median, suggesting that the top emitting property types also have a lot of room for improvement in terms of energy efficiency. In a way, this means the path is straightforward: Tackle the highest emitting property types first to make large dents in citywide energy use and greenhouse gas emissions.

This means those building types are using more energy per square foot than recommended, and are not as energy efficient as they could be. With the exception of Hospital, all property types included in the chart are less energy efficient than the Energy Star benchmark, with Prison/Incarceration EUIs being especially high. 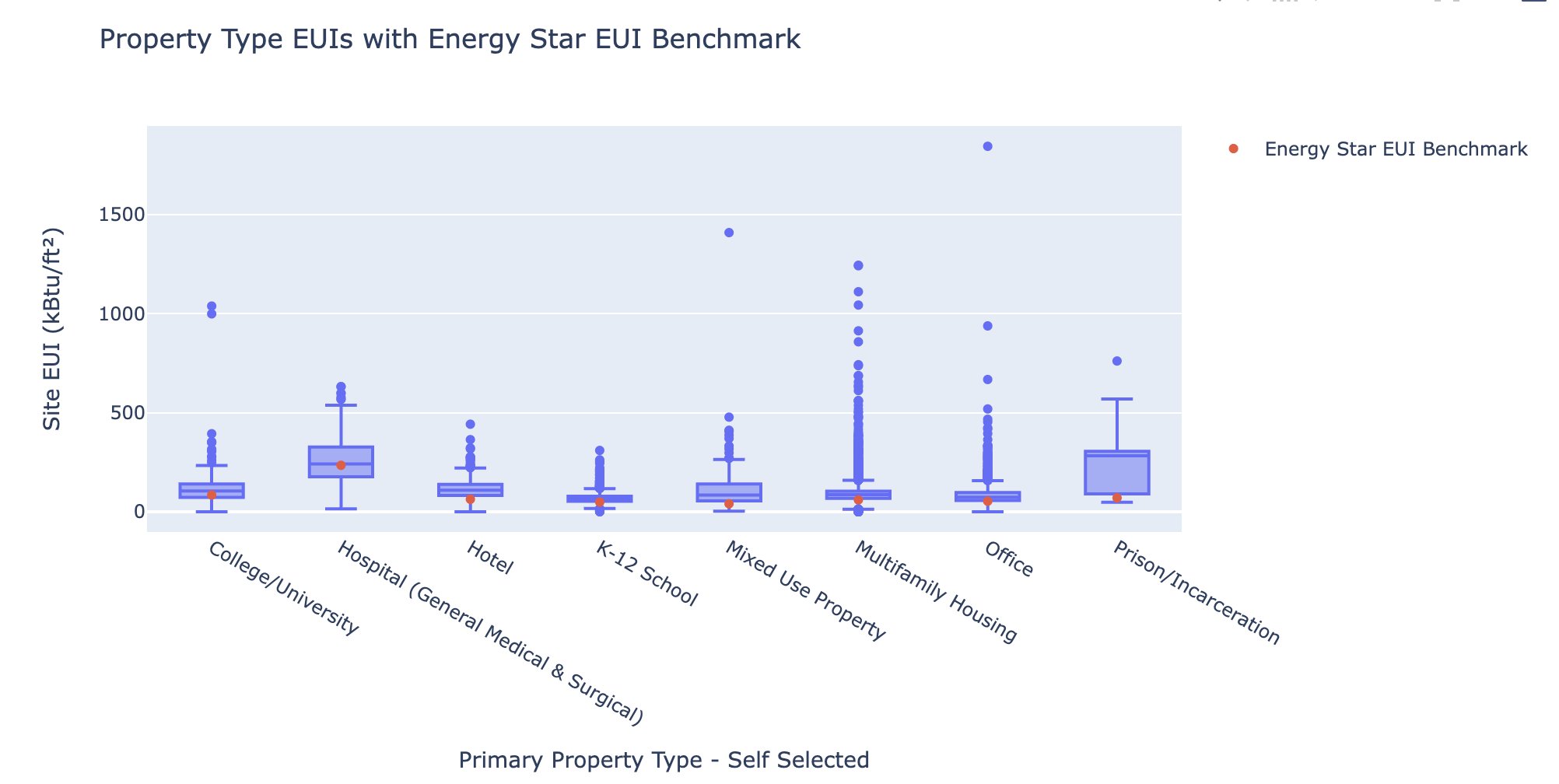 New York City has a long way to go to tackle its greenhouse gas emissions and fight climate change. However, there are many areas for improvement, including relatively low energy efficiency of some of the largest energy user property types, and a lack of onsite green power generation throughout the city. Targeting these low-hanging fruits first could lead to fast, dramatic cuts in greenhouse gas emissions, while deep decarbonization will take more time.

Expanding the dataset to include smaller buildings would help get a fuller picture of energy use in New York, and see if energy use is shifting away from the larger buildings in the city due to changing work habits during the Covid-19 pandemic.

It would be interesting to look at the breakdown of fossil fuels and steam heat usage in the different buildings, and determine a path forward for electrification. How much more electricity will be required to support electrification of these buildings?

Data Scientist in the making with a background in energy and sustainability. I'm hoping to apply my new skills in Python, R, and Machine Learning to make a positive impact on the planet.
View all posts by Caroline Keough >