Data Analysis on Internet Streaming Disney Plus or Netflix?

Data Science tells us how to choose streaming options these days. Disney, one of the most iconic American Brands, has produced some of the world’s' most beloved characters on the silver silver screen. In 2019 the entertainment and media conglomerate launched Disney Plus, thus entering the internet streaming market. At the time, movie streaming was dominated by Netflix. The question is: What does Disney Plus have to offer compared to Netflix? Is it worth paying for?

In this project, I explored the movie contents of Disney Plus and compared its offerings with that of Netflix.

The data on Disney Plus and Netflix was provided by Kaggle. I hope this post helps movie fans make informed choices as they decide on which streaming network to subscribe to.

To understand Disney Plus contents, I inspected the composition of Disney's movie database when it launched in October 2019. I found the two networks share very little contents in common. In fact, only five movies could be found on both networks: 101 Dalmatians (Adventure), Cars 3 (Animation), Little Einsteins (Animation), Finding Dory (Animation), and Frozen(Animation). Four of these five are all Disney productions.

Let's take a look at the different genres in Disney Plus's movie database. 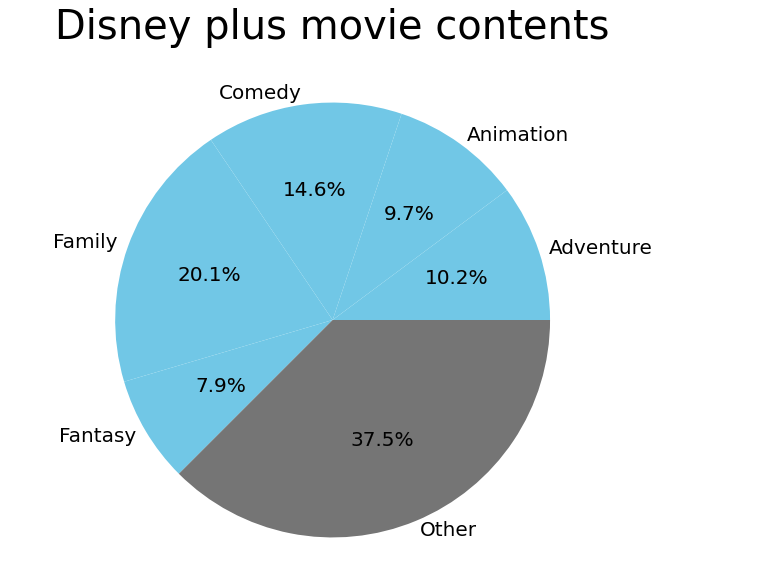 Next, I compared the number of choices one has for the same genres in Disney Plus and in Netflix. 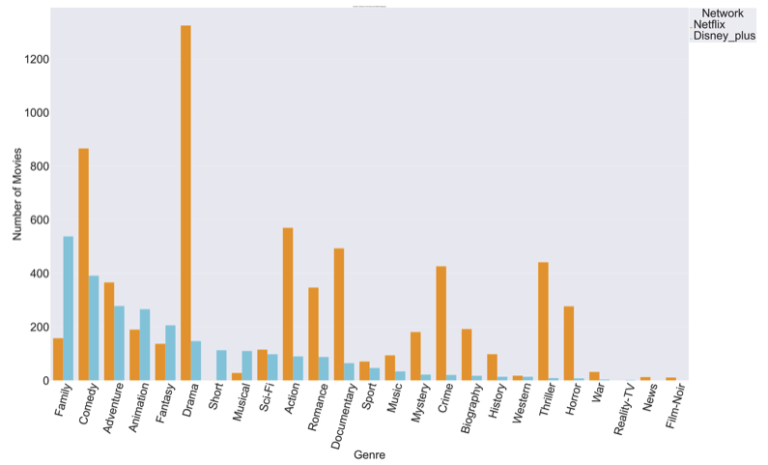 If you subscribe to Netflix, you may have more choices in genres like dramas, or in comedies and action movies. But does Disney have advantages over Netflix in these these same genres?  First, I would like to take a look at how movies in these two genres are received by audiences.

Here I would like to introduced IMDB ratings as a metric for the quality of movies. IMDB is an online database of movies and television shows.  The ratings are submitted by users of the database, and are then filtered and weighted to produce a weighted mean that is displayed for each film online. Let's look at the ratings overall for Disney Plus and Netflix. 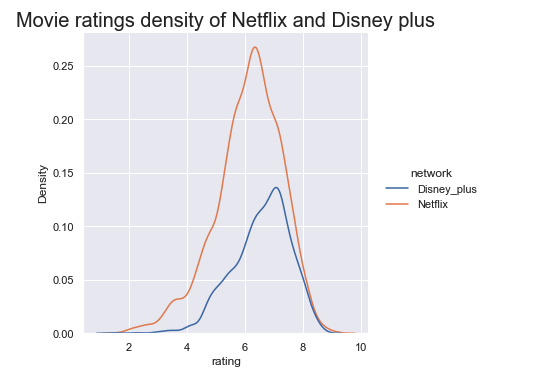 The density plot of IMDB ratings of movies shows that Disney movies are more highly rated in general, as the center of the density curve of Disney Plus is more toward the right, i.e. higher than Netflix.

Now let's look at the average rating of movies in each genre in Disney Plus vs. Netflix. I have arranged the bars in the same order as the previous plot of the volume of movies. 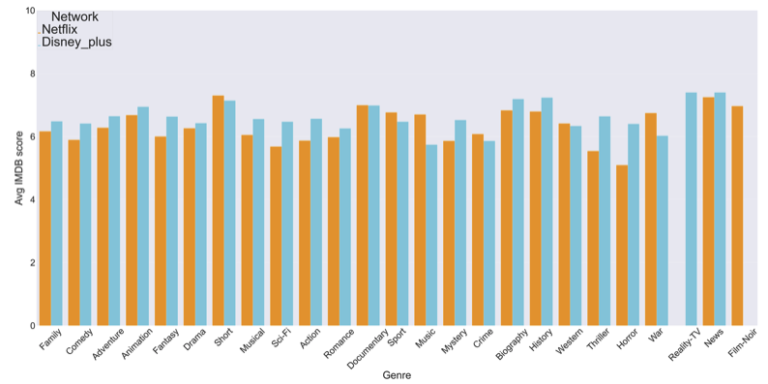 When comparing 25 genres in total, Disney movies earned higher ratings than Netflix in almost all genres.

It seems that Disney has recognized its strengths while competing with other internet streaming giants. The chart below shows the growth of Disney's movie database. You can see that Disney is slowly but surely growing its inventory in each of the genres it produced the most in the past. It's carefully maintaining the same number of outputs in each genre every month since the launch. 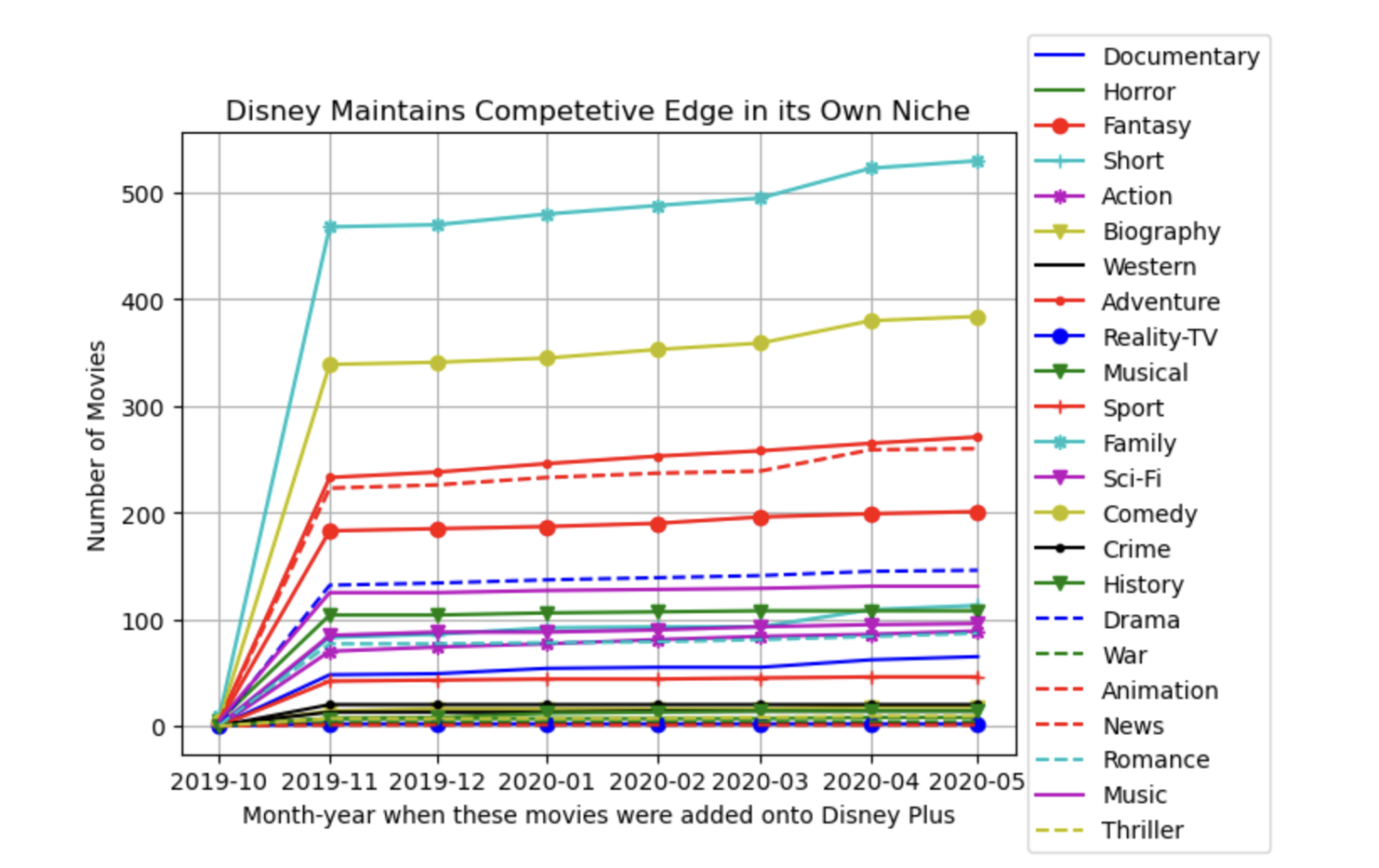 Disney is poised to be a choice network for genres such as family, comedies and fantasy movies. We could expect Disney to maintain its dominance in the niche with many high quality, family-friendly movies.  Furthermore, Disney plus has many original favorites (Finding Nemo, Lion King, the Marvel studio movies, to just name a few).  Disney Plus' monthly subscription is set at just $7.99/month comparing to Netflix's $8.99/month. At lower price than Netflix, perhaps it's a good idea for a small family with kids. And if you would like to view a larger volume of different kinds of movies, you could also checkout Disney's associated networks such as Hulu which have been offered as a bundle with Disney Plus. Happy watching! 🍿

I worked in the Pharmaceutical industry and primarily focused on model building for oncology clinical trials. I am excited to learn more about machine learning as I pivot to a career in data science.
View all posts by Cherie Wang >