When I came across the data on Kaggle, I remember reading about how gold hit its highest point during the pandemic and wanted to explore how gold reacted during the past economic crisis.

The data I used for this project is called gold rate (1985-present) and it includes two sets of CSV files.

But by looking at the percent change graph, we can see the similarity they share in the time period. The following correlation graph explains the data better. 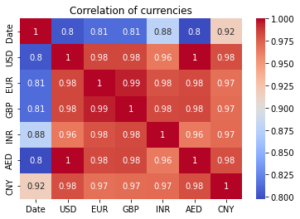 From the 80s, I picked eight notable economic crises that best represent its decade to look at how gold rates were affected. 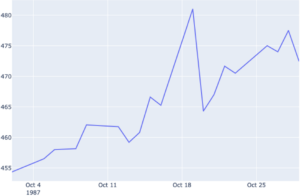 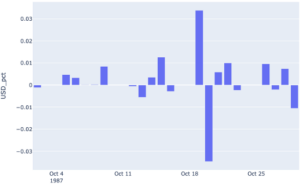 During the early 90s recession, we see that the price of gold was very reactionary, with the biggest increase being 38% and its biggest dip being around -60% on Jan 17th, 1991. The extreme range can be seen for the Euro during black Wednesday. During September of 1992, The price of gold ranged from 222Euros to 254euros, with the highest daily change percentage being around 51%. 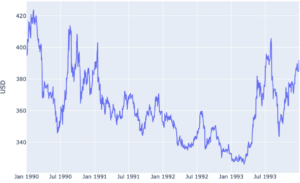 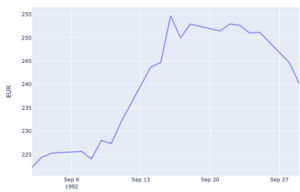 Data during the Great Recession

Starting from the great recession, we see distinct trend of price of gold going up during an economic crisis. We see that the range has significantly increased, this one being from 608 dollars to 1212 dollars. 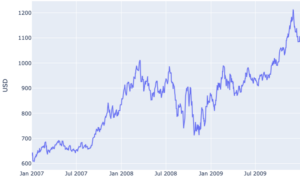 Moving on to the early 2010s, we see the continuous upward graph of the rate in Euros during the European Debt Crisis. The standard deviation has doubled during this period from the great recession, reaching 233. This graph is a bit different from the rest in its fluctuations. 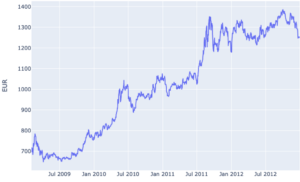 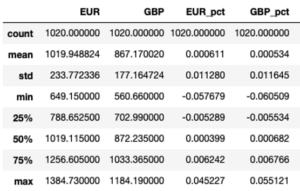 Covid is when we saw gold reach its highest point at $2067.15 on Aug 6th, 2020. As seen in the graph, New variant discoveries caused a couple of sudden rate changes. While gold has reached its highest point, the standard deviation has calmed down to 97.

The Russian Financial Crisis is the current event that we are experiencing. In regards to gold, we see the first significant peak on Feb 24th when Russia invaded Ukraine.

From what I’ve seen from the data, I can see why the news and people start talking about gold when the economy starts to stumble. While I do not agree with the statement that gold is stable, I agree with the opinion that gold is a good choice of investment. A fun takeaway we can get from this data is to use the weekly price chart of gold instead of taking the time to read the news to see if anything is happening economy-wise.

As for things I wish I could have done more with this data and hopefully work on in the future with further learning, I would like to use machine learning to see how the rates would change in the future and look at sharp increases/decreases to possible predict future economic event.

View all posts by Justin Yoon >