The skills the authors demoed here can be learned through taking Data Science with Machine Learning bootcamp with NYC Data Science Academy.

Our objective for the project was to find undervalued homes, determine the most important features that can be improved upon, and from there, pick out features that would have the biggest incremental impact on sales price for homeowners or real estate investors looking to make home improvements or flip houses.

Data About Homes and their Features

The dataset we used consists of 2580 observations of 82 features, with each row representing a home sold in Ames, Iowa. For the purpose of prediction, we largely focused on the bottom 80% of homes by Gross Living Area. In this subset, the Sale Price and Gross Living Area by square feet followed a linear relationship while the top 20%, as the Gross Living Area increased in a home, had a diminishing contribution to the Sale Price.

The Main Attribute Types in the Prices of Homes

Then, the next step was to clean the data and deal with null values. Shown below, there are two tables that show the percent to total observations for each feature that nulls represent in the data. The main features of concern when dealing with numeric features were Lot Frontage and Garage Year Built. For Lot Frontage nulls, we imputed the median Lot Frontage values by Neighborhood, and filled missing values with that calculated number. And with Garage Year Built, in order to not skew data, we set the median value by the Home Year Built, which in observations with both values, were closely correlated.

For categorical null values, we consulted the dataset’s data dictionary, where it was stated that for these features, if an observation was null, the home did not have the specific feature, and nulls were set to ‘NoneListed.’ 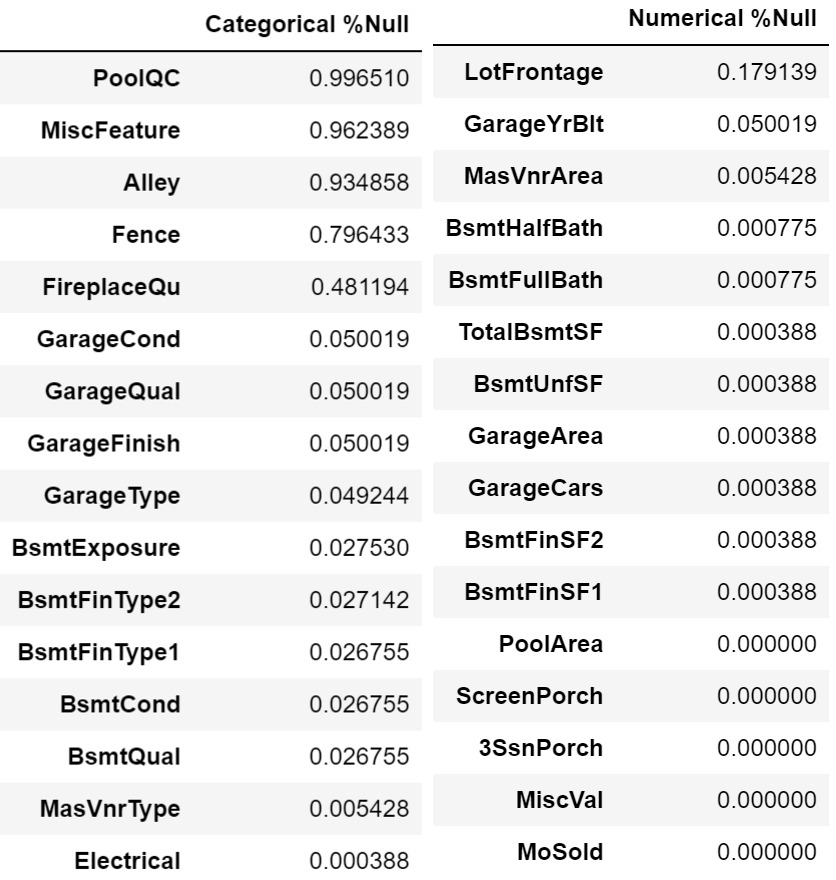 After extensive exploratory data analysis on the raw dataset, we chose to remove 28 total observations from the data, including one duplicate. Within the following features, we removed values that had potential to skew the data:

Exploratory Data Analysis About the Pricings of Homes 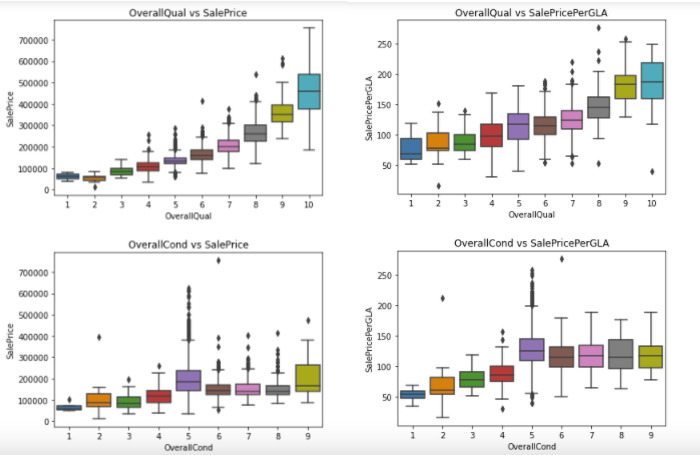 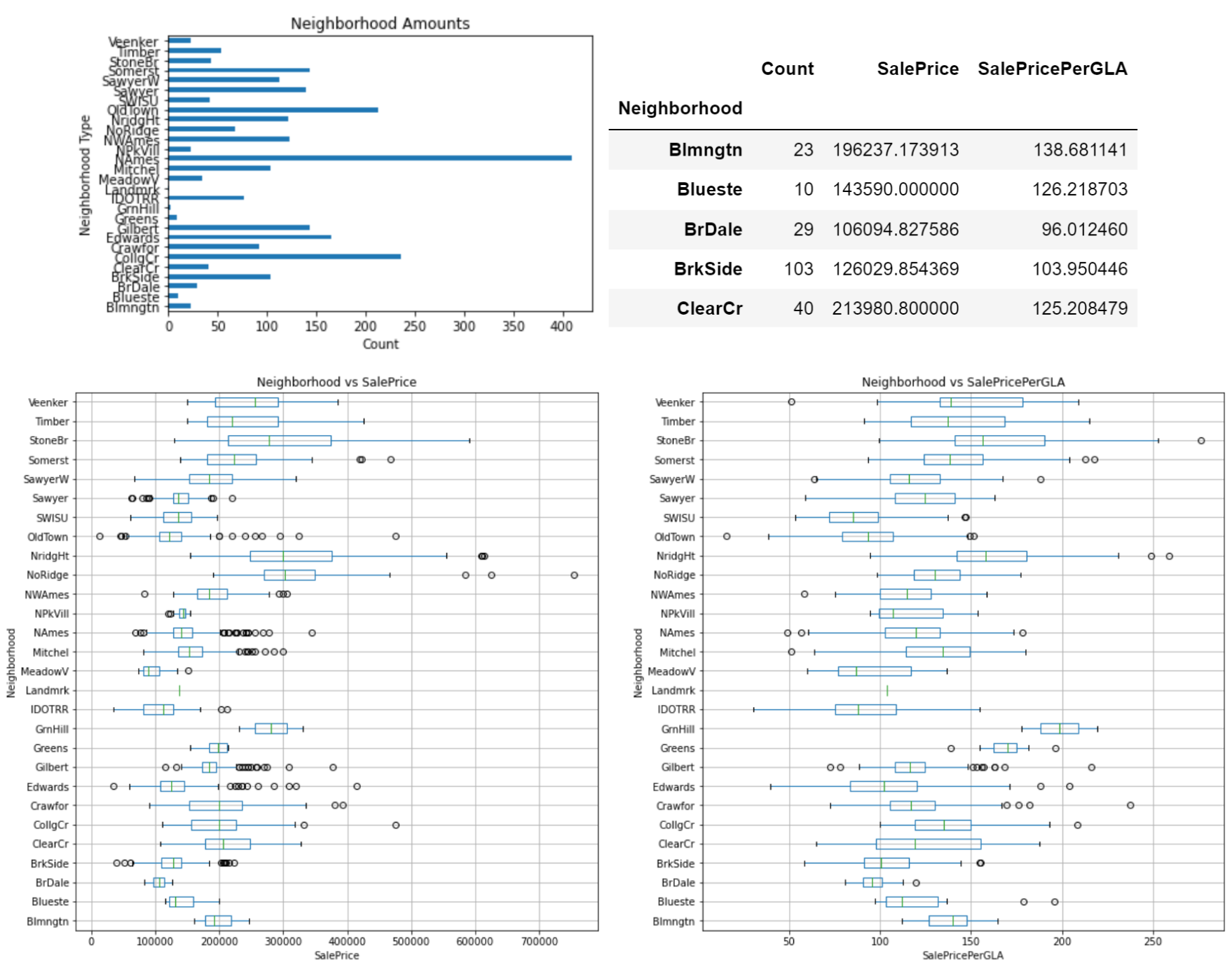 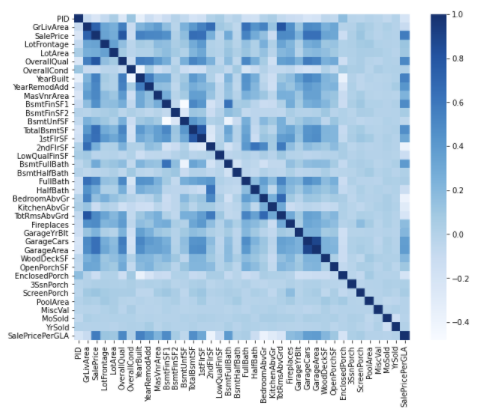 The 20 ordinal features were label encoded, with null values or NoneListed represented as 0. The categorical features were then dummified, dropping the first dummy variable in each group. The label encoded ordinal features and dummy variable groups were, then, added to our remaining table of numerical features in a stepwise process, again, making sure that each addition would increase our adjusted R squared. At the end of this process, we included 117 out of a maximum of 234 features in our dataset.

Models, Methods, and Analysis About the Pricings of Homes

The first models fitted were multiple linear regressions. For the sake of interpretability, numeric features were normalized so that when looking at the coefficients of features later, we could easily discern which features had stronger positive and negative correlation to a home’s Sale Price per GLA. From this multiple linear regression model, there was a strong indication that certain neighborhoods in Ames had high Sales Price per GLA, especially Green Hill. Features with very negative coefficients were several MSSubClass Zoning categories, indicative that homebuyers tend to avoid homes with those Zoning Codes. 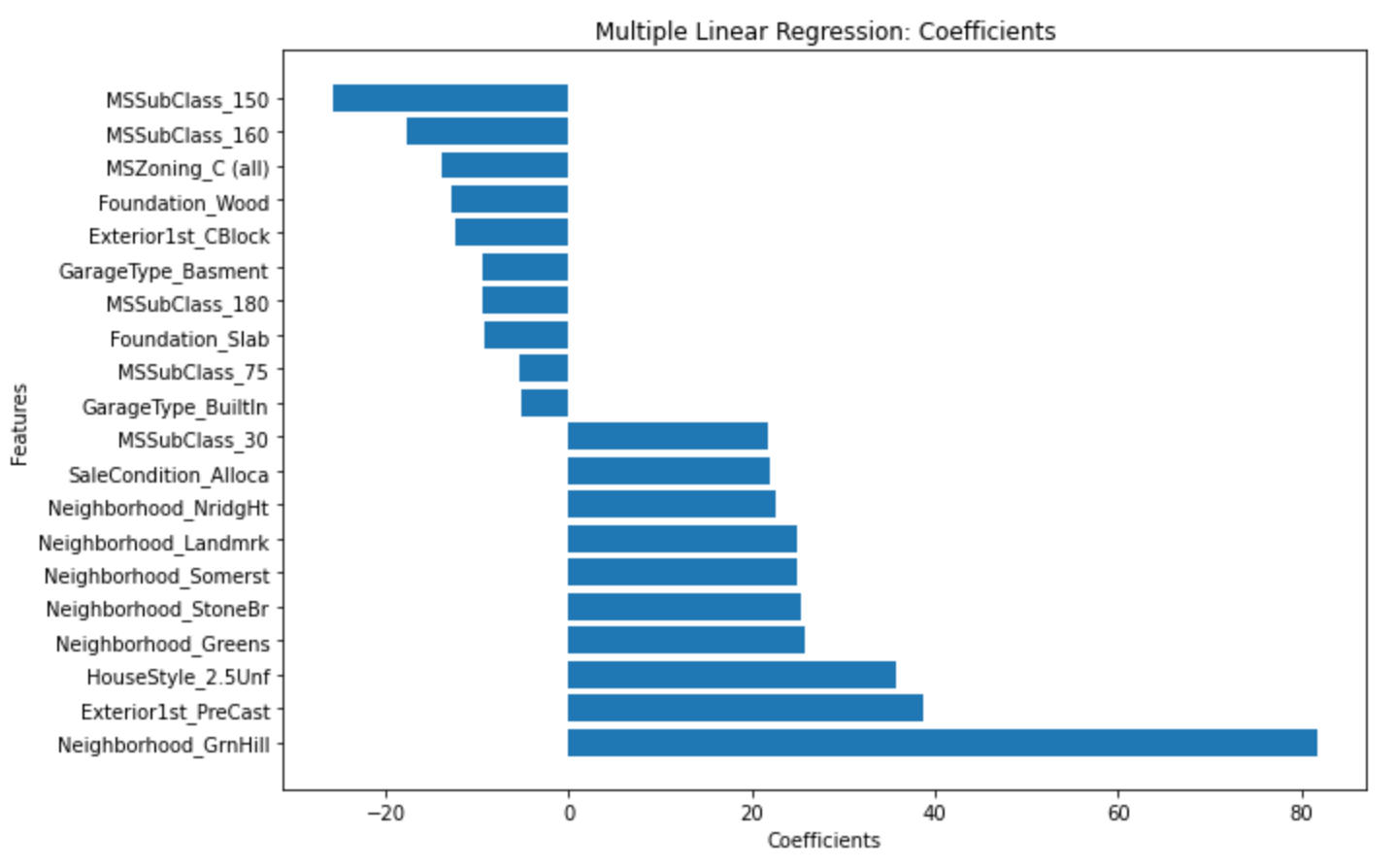 For the purpose of homeowners & real estate investors seeking to make home improvements to raise the Sale Price of homes, we then narrowed the features down to those that could be improved (Kitchen Quality could be improved, for example, but the neighborhood a home is in cannot be changed) to see what improvements would have the highest impact on a home’s Sale price. 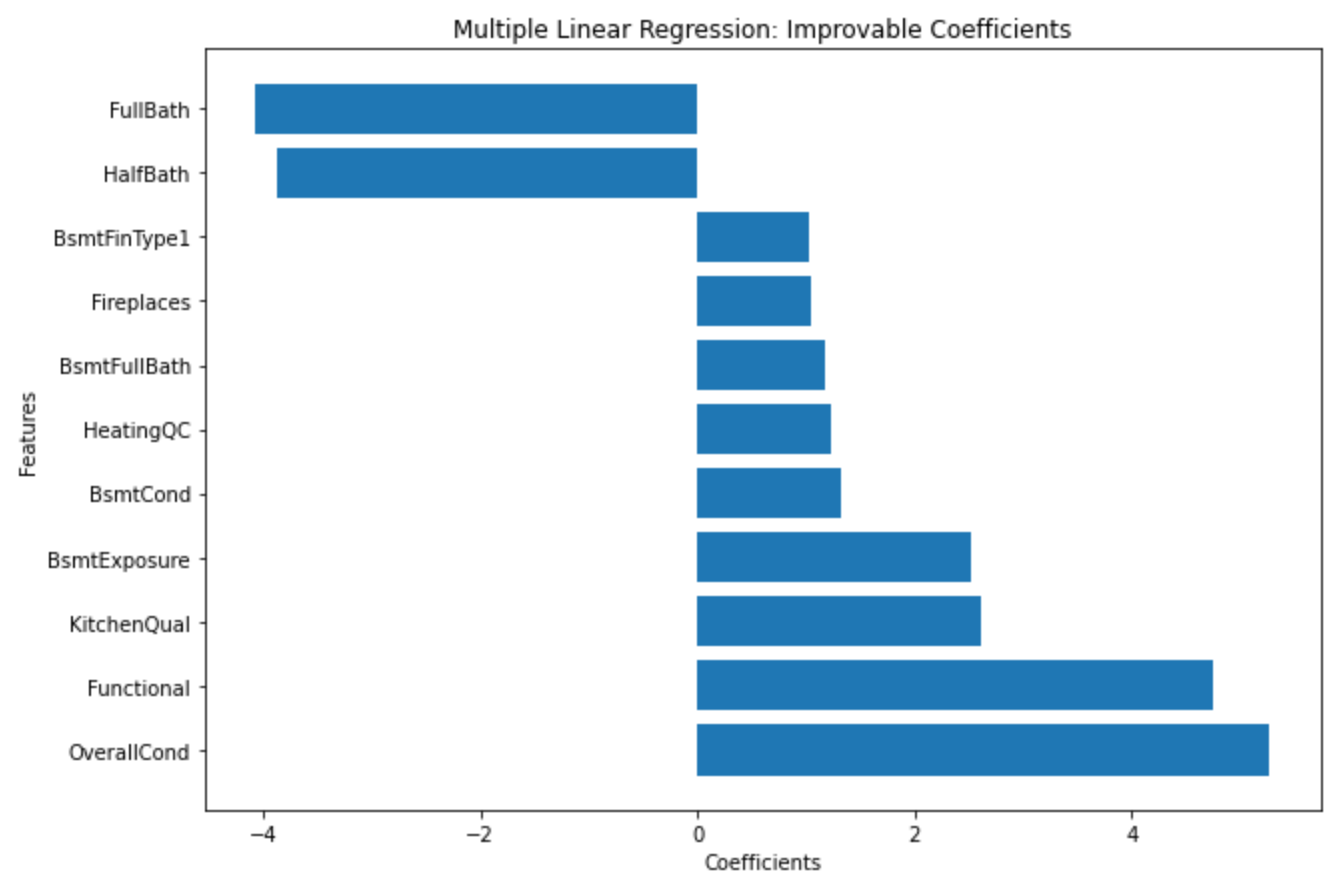 The same procedure was repeated with penalized models, grid searching for the best estimator’s value of Alpha (which affects the strength of penalty applied to minimizing the RSS versus minimizing the sum of squares of the coefficients). Using the Lasso model was particularly useful in our understanding of the importance of features on the target variable, as the worst predictors of Sale Price per GLA were removed by the model. A very similar pattern emerged in the penalized models as with the multiple linear regression model in terms of most positive and most negative coefficients and with improvable features. 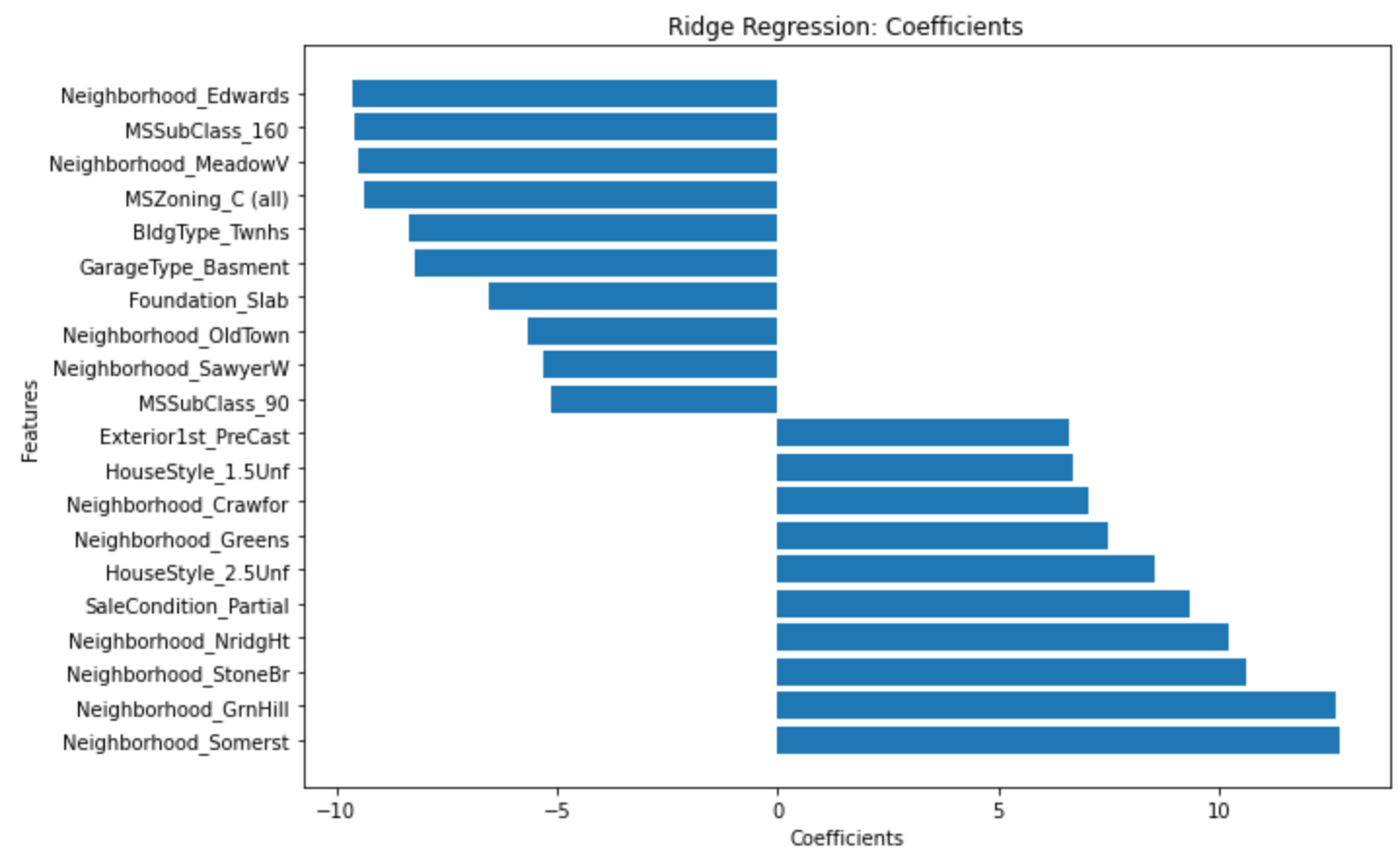 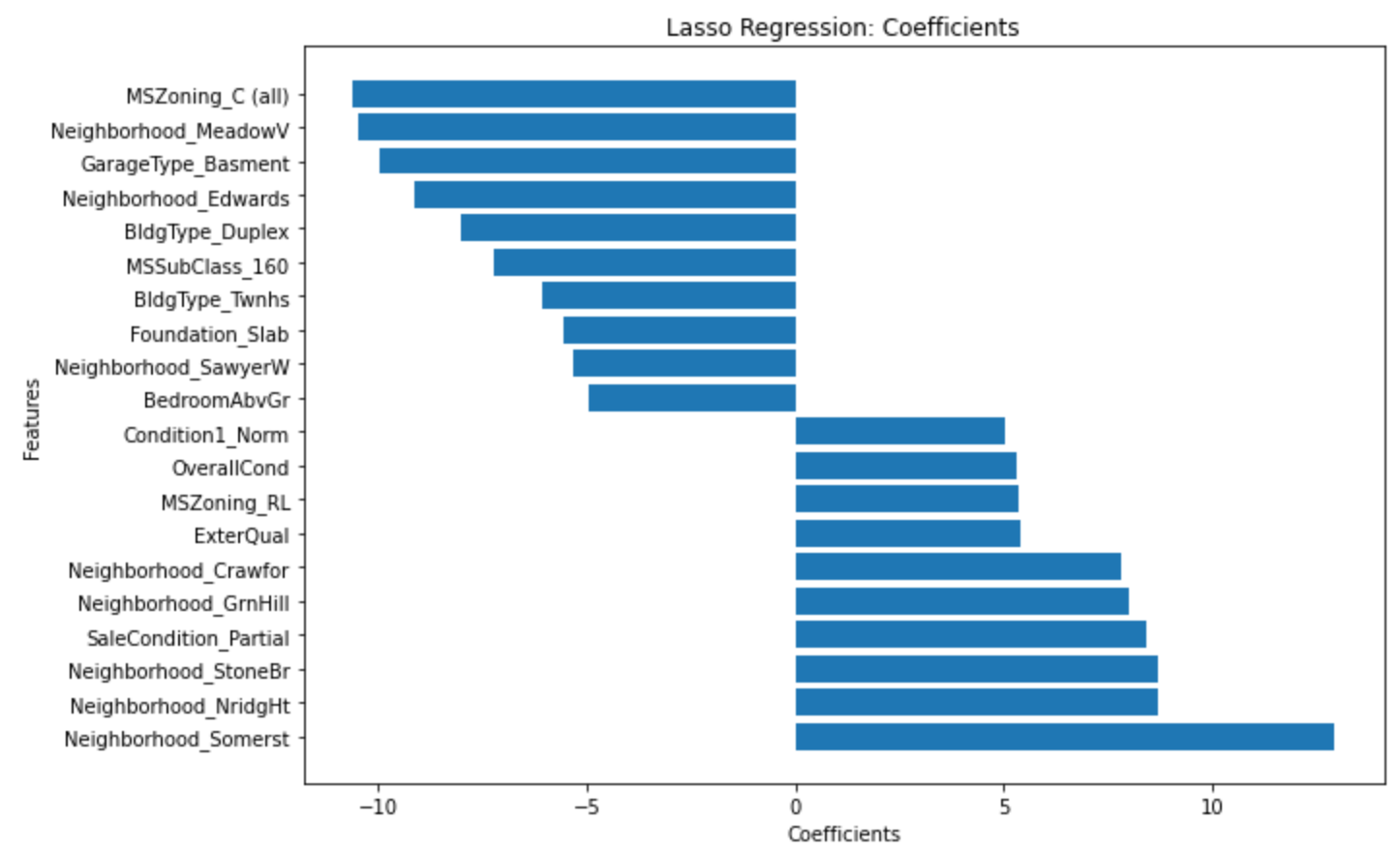 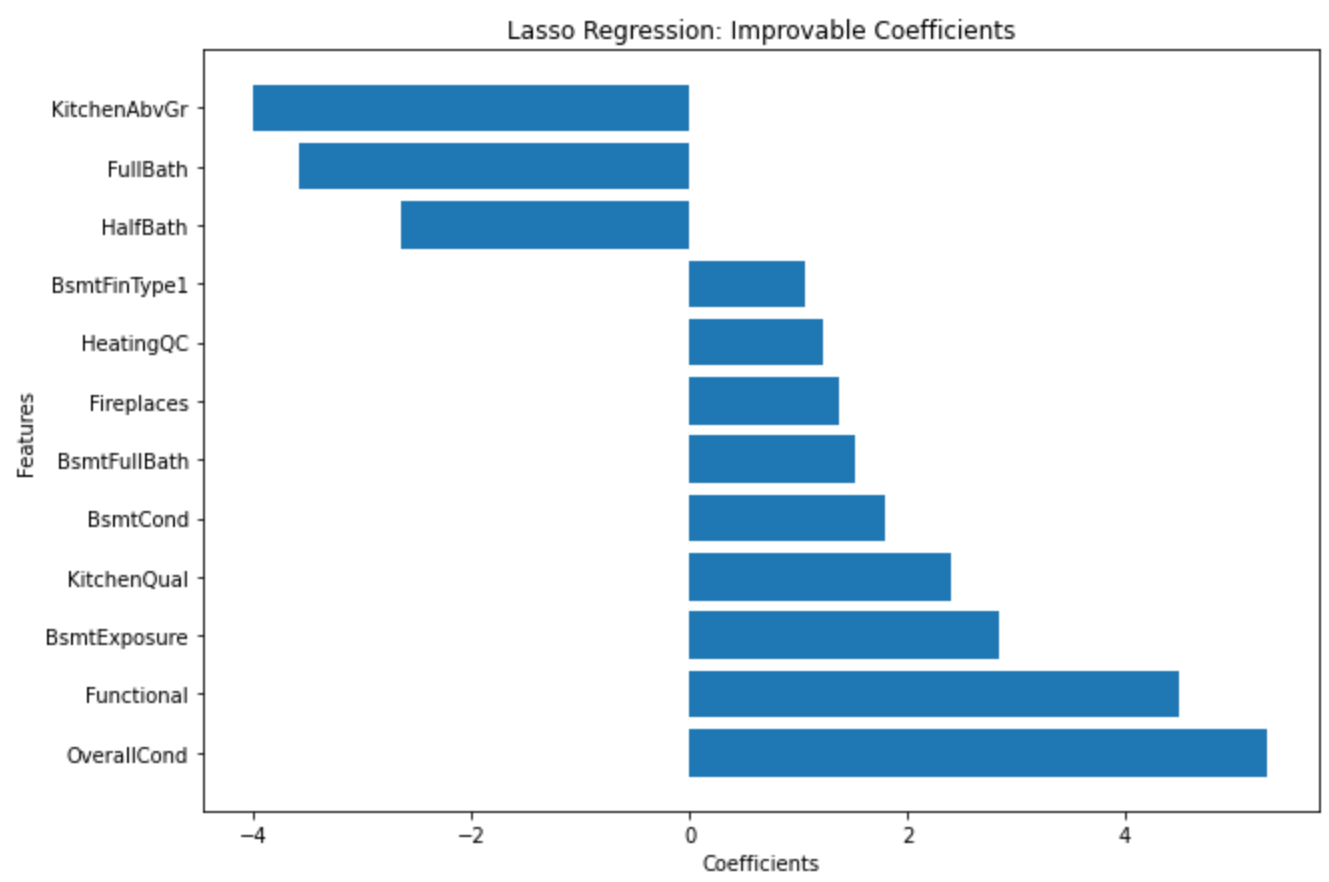 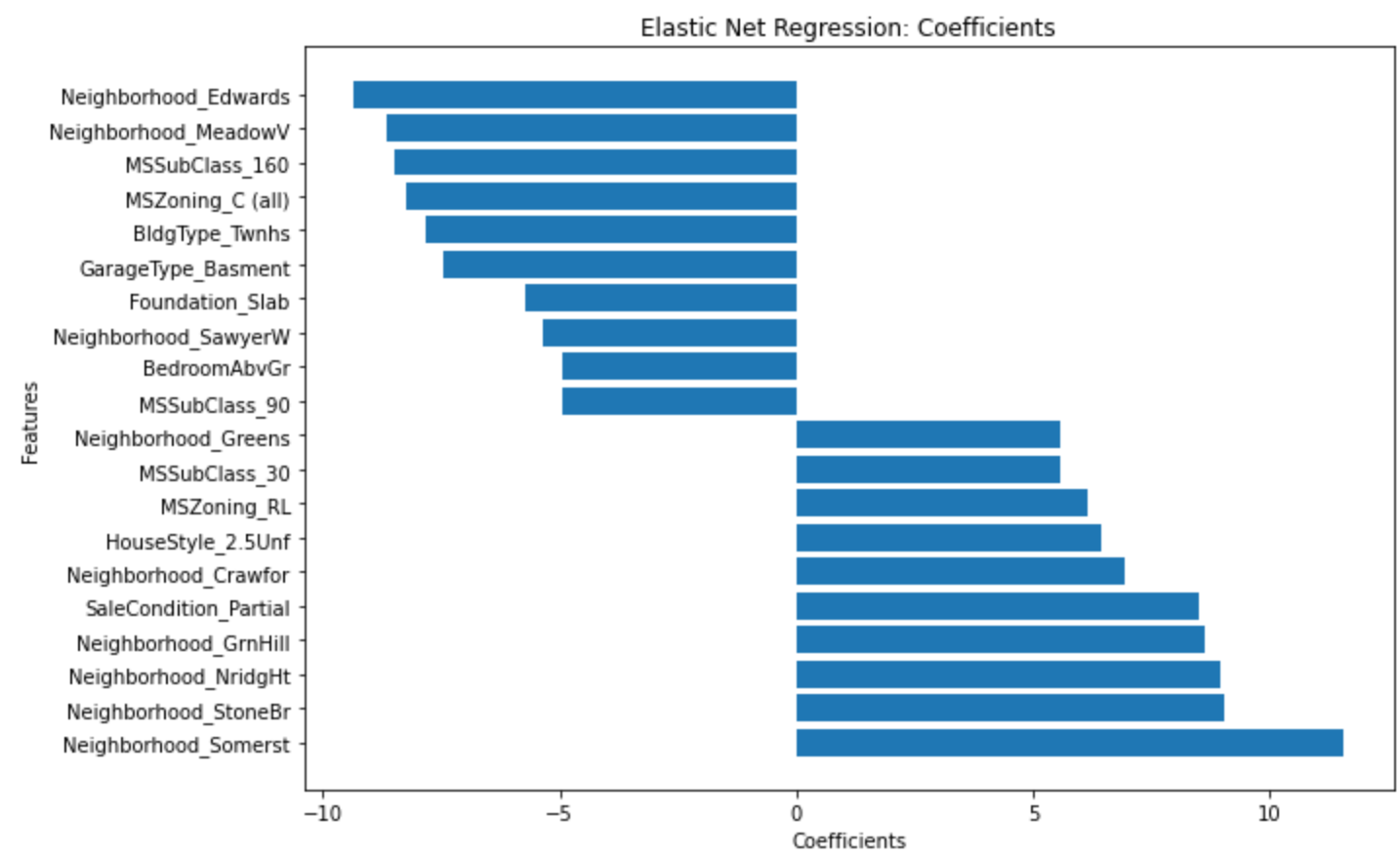 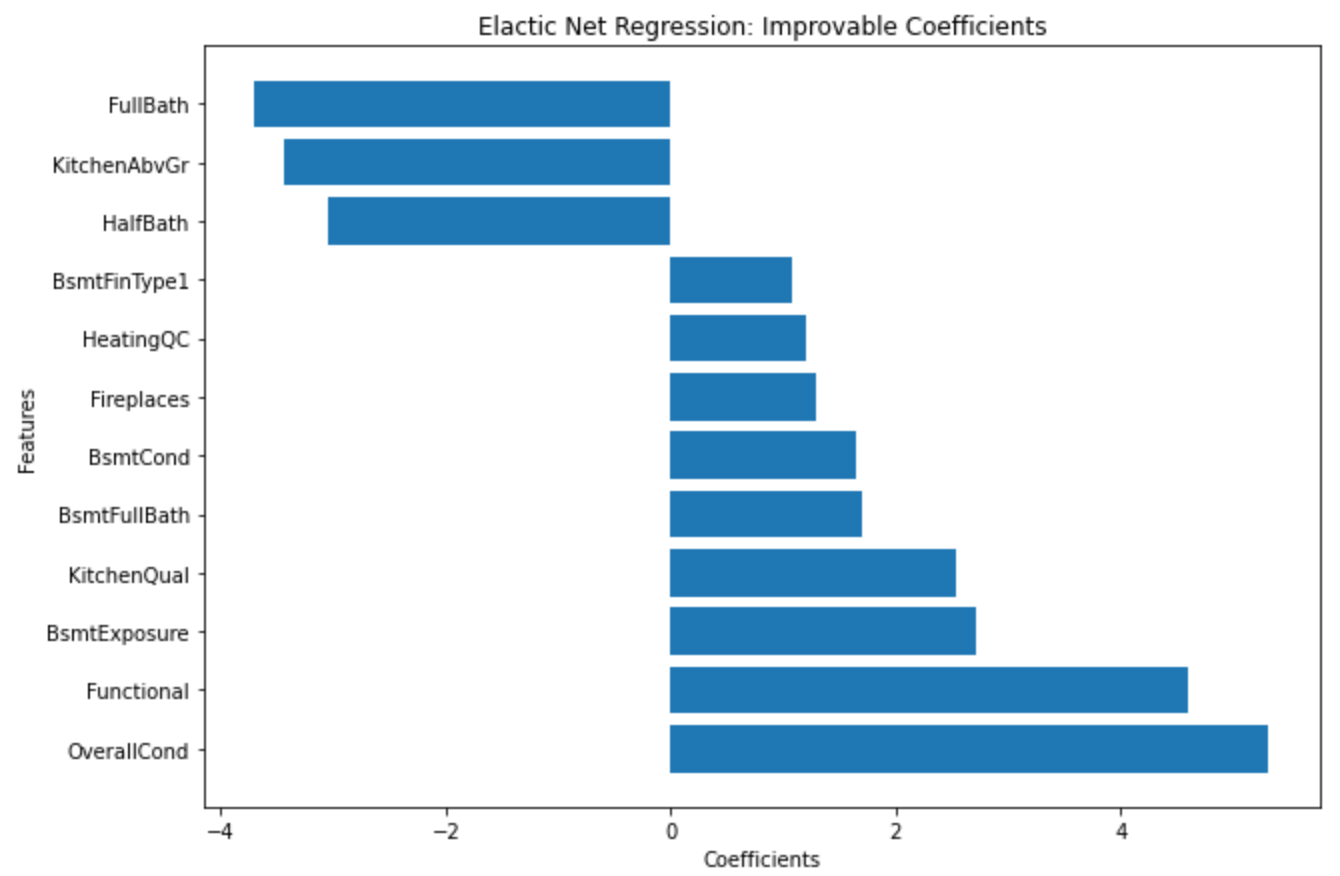 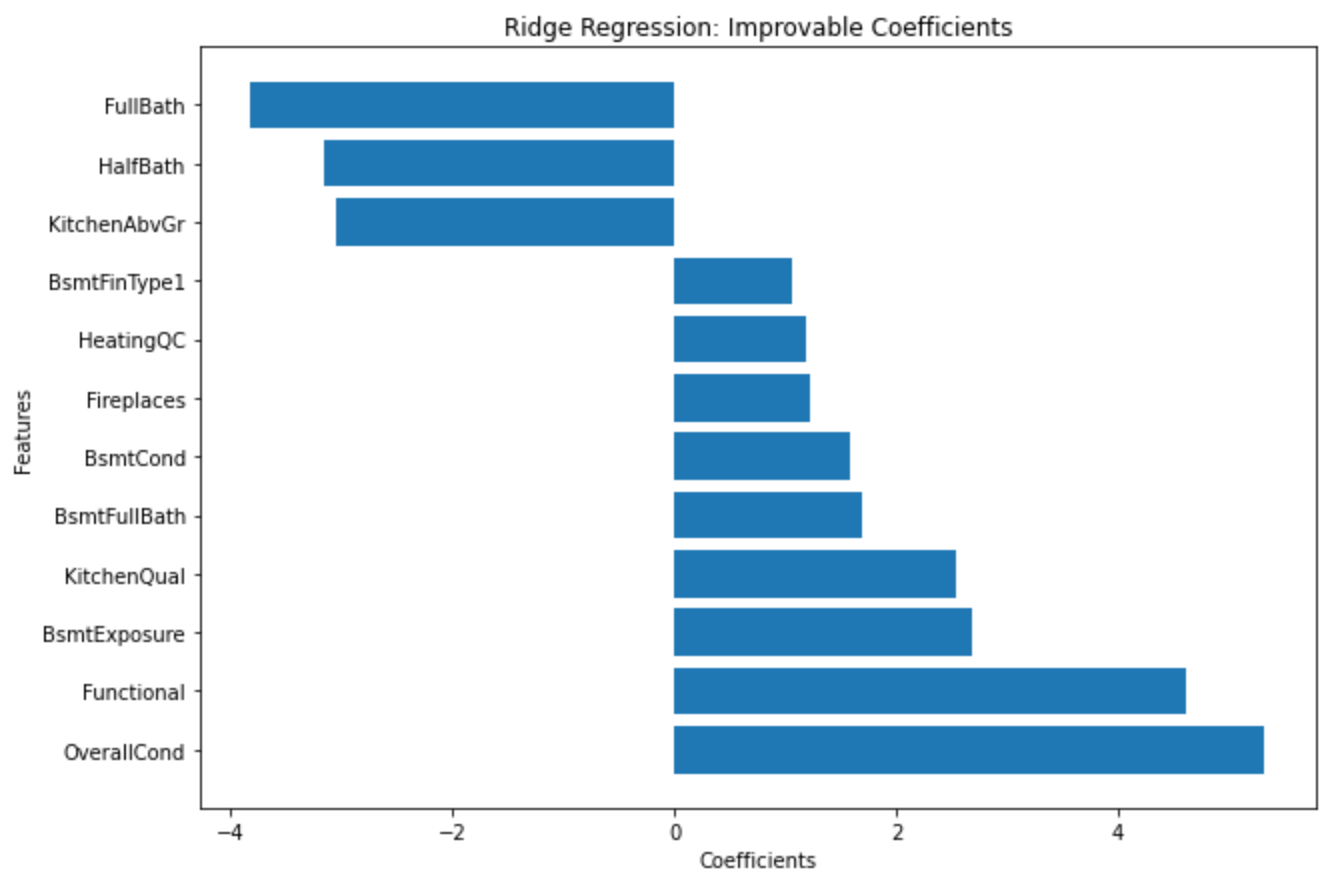 Following the same process, we implemented Random Forest Regression. After tuning the number of trees and the maximum depth each tree could reach, we reached the values 500 and 11, respectively. The charts below show the features ranked by feature importance as Random Forest does not use coefficients. 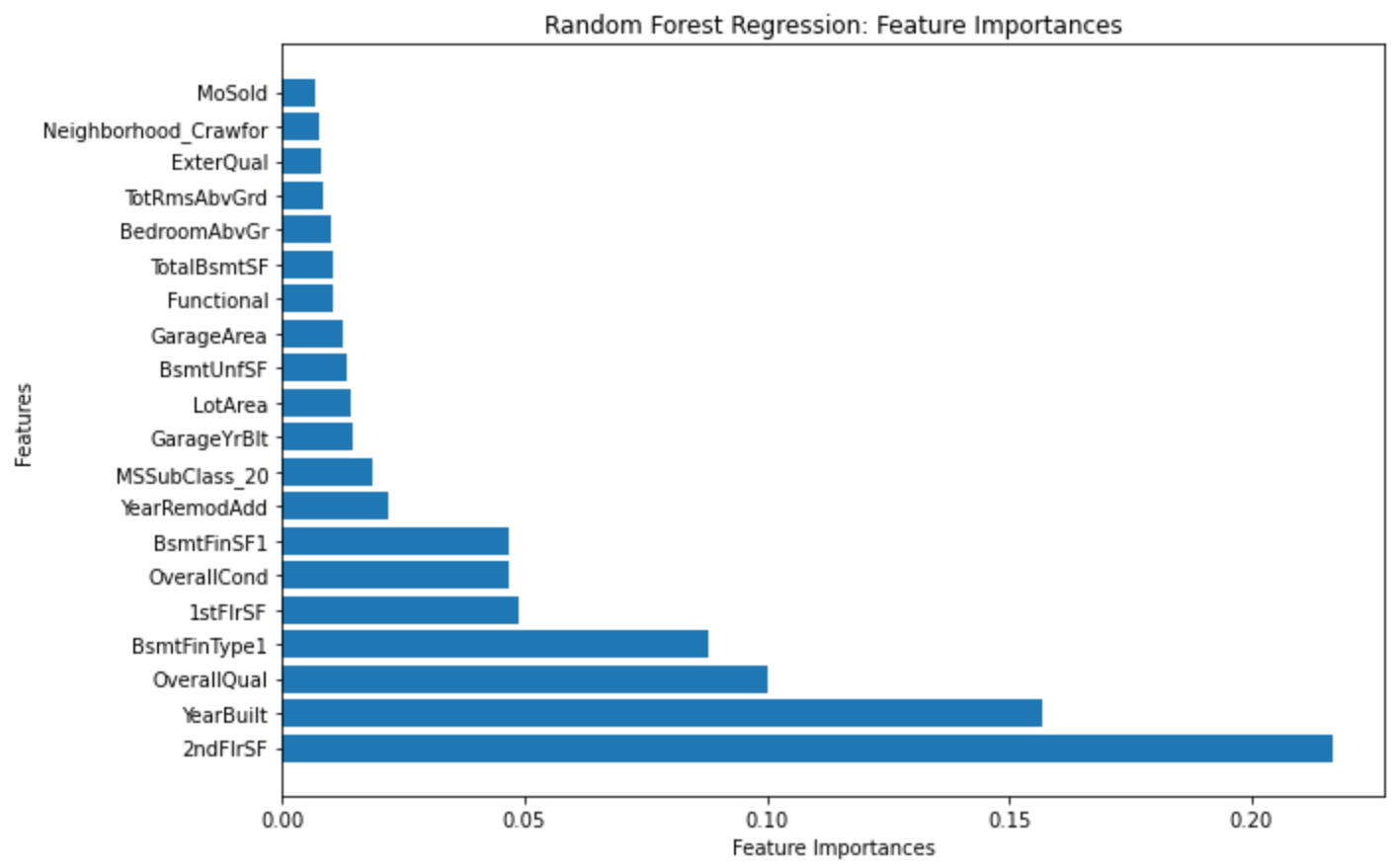 Again, we filter out the features that cannot be changed to make a new chart. 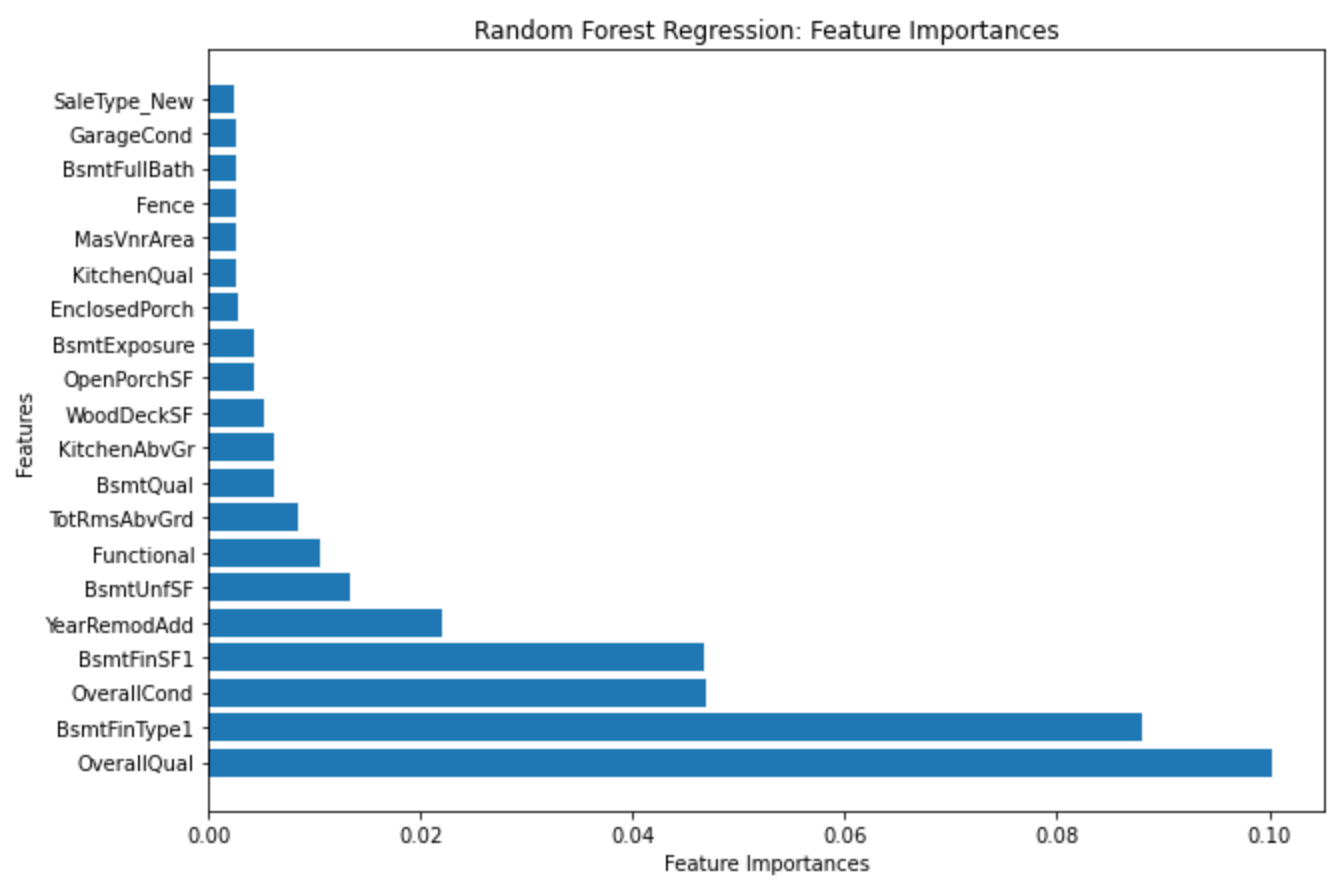 Unfortunately, the Random Forest is not a reliable model for this purpose. When using this model, one must consider the maximum depth of the Forest based on the number of observations. Our training set contained 1,531 and each split separates the observations into 2 groups. With a best maximum split of 11, we can see that the training set is split into 2^11 or 2,048 groups, more than the number of observations. From this we can see that this model is obviously overfitted.

To be able to determine the coefficients that find the important features, we went with a ‘linear’ kernel. Similar to the process mentioned, we were able to use grid search to get the ‘C’ and epsilon (ε) parameters. The top overall features were 1st floor square feet, 2nd floor square feet, ‘Overall Quality’, and ‘Year Built’. For the improvable features, the top ones were home exterior material, ‘Overall Quality, and ‘Overall Condition’. 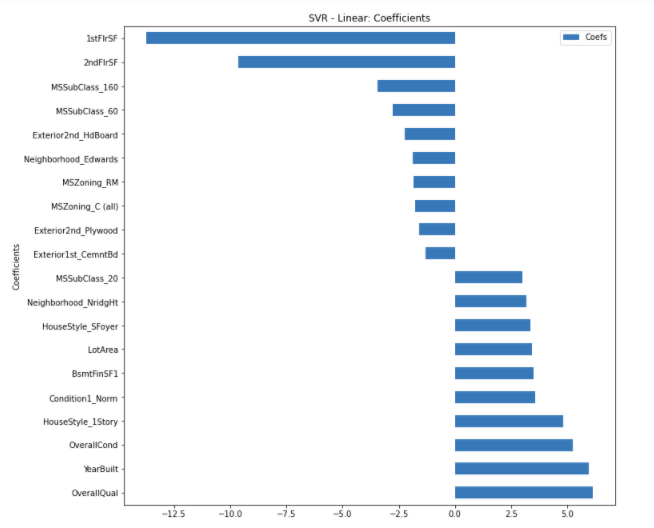 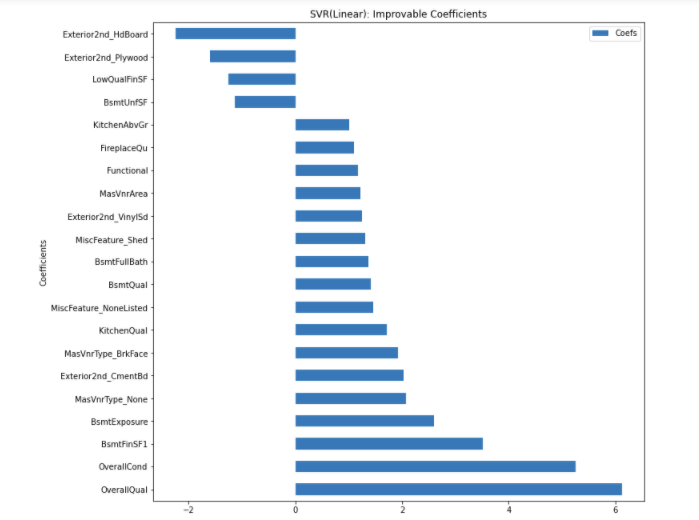 We decided to use the XGBoost library for our gradient boosting model. Since our categorical data had been label or dummy encoded, we could apply the XGB Regressor model to our data. The default gbtree was used instead of gblinear or dart because of the higher accuracy using default parameters.

XGBoost offers a wide selection of parameters for fine tuning. We ended up tuning 9 different parameters via GridSearch: learning_rate (0.05), n_estimators (1000), gamma (0.5), max_depth (3), min_child_weight (10), subsample (0.4), colsample_bytree (1), reg_alpha (1), reg_lambda (3). Most parameters were tuned sequentially, so that changes could be made over time. Then, a final tuning was performed to confirm these were the optimal parameters.

Upon fitting our XGB model, we looked at feature importances to identify and compare them to our other models. The top 20 features by weight are shown below: 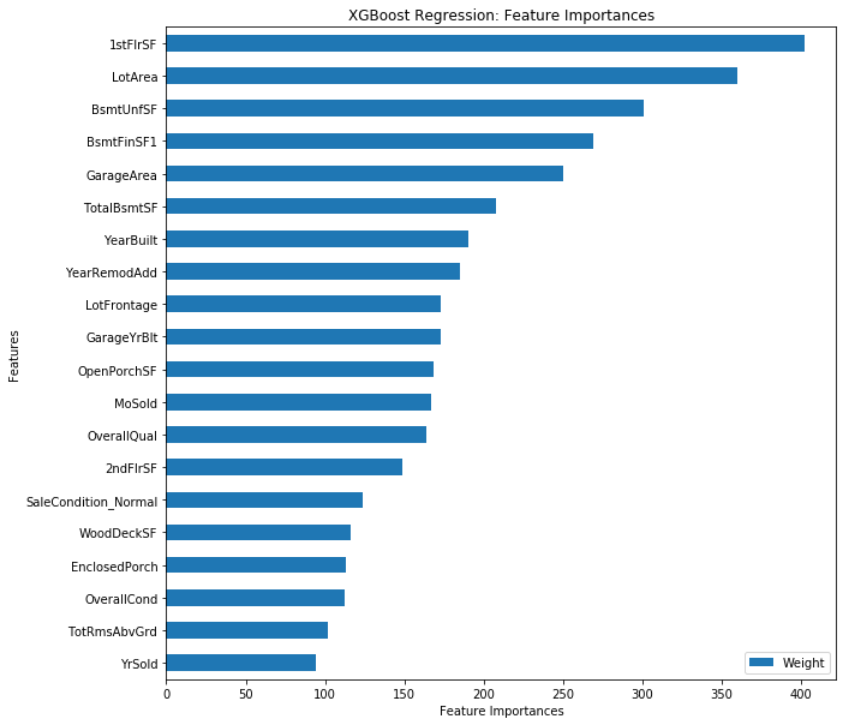 Many of these features were considered too difficult to improve without a great amount of effort on the homeowner’s part; removing them would allow us a better look at the features that would be easiest for a homeowner to improve in order to raise the SalePrice of their home. After removing those ‘difficult’ features, we arrived with the following list:

We chose the five features that all models valued positively to change so that that home’s SalePricePerGLA would rise, and thereby increase the SalePrice:

The setting is the change in these features to be applied to undervalued homes and predict a possible increased price after home improvements are made.

Model Results for the Pricing Data for Homes

From our modeling, we got the following scores: 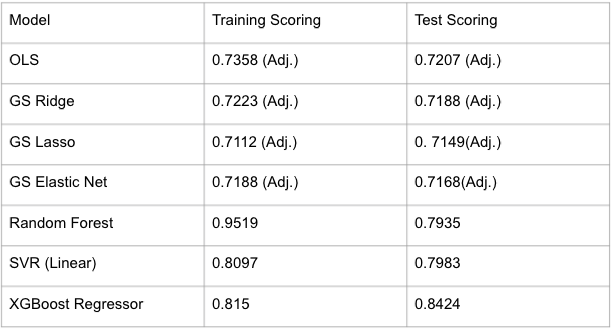 We chose to use the supervised models over the penalized linear models for the rest of our analysis, sacrificing a clearer relationship between the features and the predicting factor for accuracy in our final result.

We used a naive threshold for determining whether a home was undervalued. This threshold would likely be different if we had domain knowledge or more data available to us.

“New” and Improved Homes by Model

From the top 50 homes (by gain in predicted Sale Price) of each model, we had the following overlaps of PIDs:

We believe the homes from the XGBoost/SVR overlap would be the best picks, since those two models had the highest test scores.

Data Scientist seeking to leverage on model development experience and understanding of research design and hypothesis testing. Previous experience in Computer Science and Bioinformatics.
View all posts by Aleksey Klimchenko >

I am a data science fellow at NYC Data Science Academy with a Bachelors in Mathematics and Psychology. I am looking for opportunities to improve efficiency and maximize resource utilization using data visualization and statistical analysis.
View all posts by Nixon Lim >