My R Shiny project is intended to be an example of how data visualization can be used as a tool for “quick and dirty” exploratory data analysis (EDA) for complex datasets. By aggregating and visualizing some of most widely used data sets for macro risk indicators, Macro Risk Index will allow researchers to save time running crucial yet time-consuming EDA checks. The key strength of these interactive data visualizations is that they allow you to compare and interpret trends and distributions in a single glance. This holds true whether the research is located in foreign policy analysis for the government or macro research in finance.

In this iteration of Macro Risk Index, the focus is on conflicts, as indicated in five risk areas: 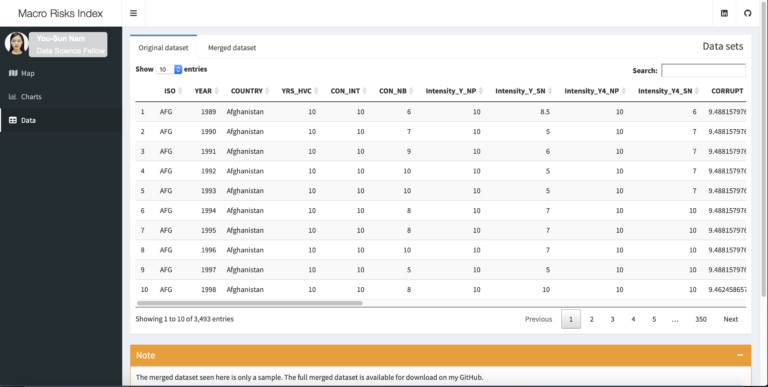 Guided Tour: How to Use Macro Risk Index

To accommodate a wide range of research questions on the risk of global conflicts, Macro Risk Index is built to be as interactive as possible. To allow for regional grouping, I merged the primary dataset with a different dataset featuring regional statistics: Lukes’ dataset on Wikipedia’s ISO Country Codes and UN regional and subregional statistics. Given the widely diverging units and scales, each indicator has been rescaled from 0 to 10 for more accurate comparison.

For example, let’s assume you are a young macro risk researcher interested in exploring food insecurity in relation to conflicts, but you aren’t sure where to begin or how to postulate a statistically significant relationship. You could conduct an exhaustive search of academic literature, locate industry-standard data sets, and run standard statistical EDA tests — all-in-all, a time-consuming process.

Alternatively, you could begin your research process using a data visualization tool like Macro Risk Index to brainstorm new leads. Afterwards, you'll still have to go through the rest of the rounds, but this time, you'll have spent no more than an hour narrowing down econometrically promising leads. 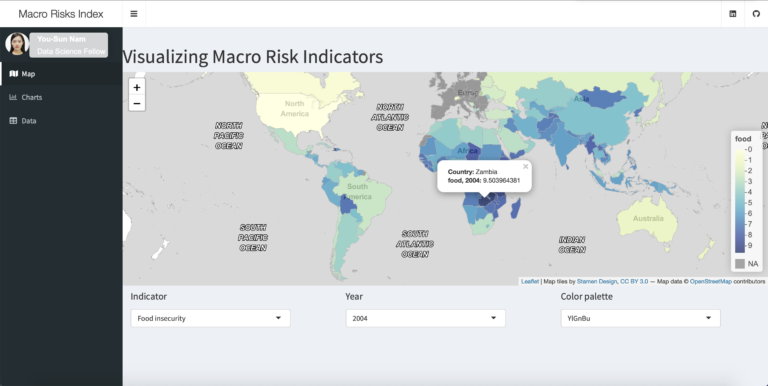 Figure 3.1 Levels of Food Insecurity Around the World in 2014

Feature explanation: The map allows for a sweeping visual comparison of a selected indicator — in this case, food insecurity — across the world, on a scale of 0 to 10 in ascending levels of magnitude. By playing around with the map, you can narrow your geographical scope by region or country, in addition to selecting a particular year. Let's say you're interested in 2004.

"Quick and dirty” EDA: In 2004, U.S., Canada, Australia, and New Zealand had relatively less food insecurity compared to other countries. (Please note this does not mean the aforementioned countries lack food insecurity, only that they have less in comparison to other countries.)  On the other end, Sub-Saharan Africa — followed by Asia — had higher levels of food insecurity relative to other regions that year. This might be a useful place to start if you wanted to understand where and why food insecurity levels were higher in these regions. For the purposes of this tour, let’s assume we are interested in Zambia, given an incredibly high index of approximately 9.5 (out of 10). 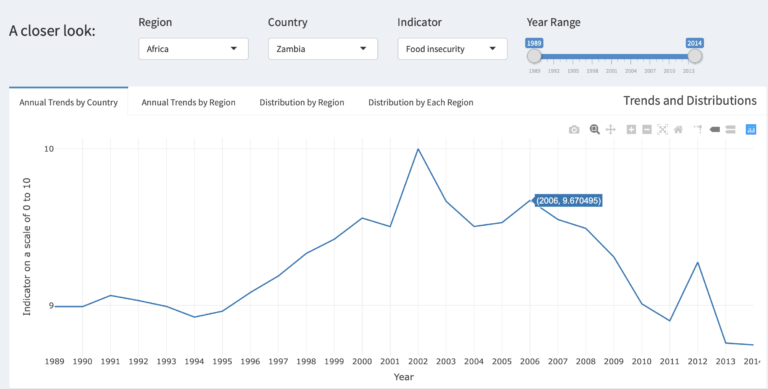 Feature explanation: “Annual Trends by Country,” as indicated by the first tab, allows you to explore the annual trends of an indicator from 1989 to 2014. It allows you to narrow the year range and click any data point on the line graph for the exact numbers by year and index.

"Quick and dirty” EDA: If the map pinpointed Zambia as a country with leading levels of food insecurity in 2004, then the next step may lead you to the "Charts" section of Macro Risk Index, which contextualizes data point(s) within overall trends and distributions. In this graph, we can see the annual trend for food insecurity in Zambia from 1989 to 2014 fluctuates from a scale of 9 to 10. Food insecurity hit peak levels in 2002, followed by 2006 and 2012. These outliers might be interesting to examine. 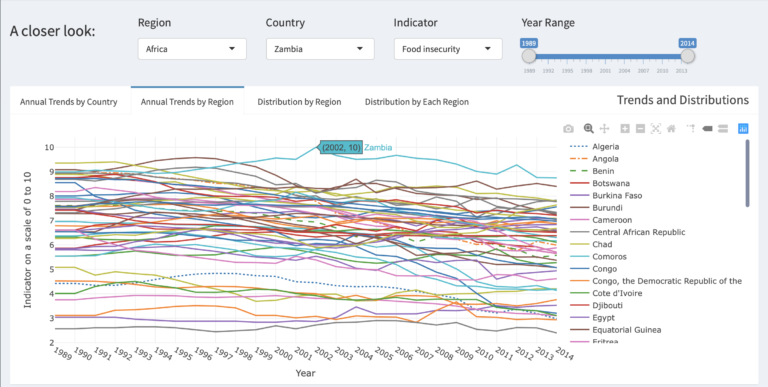 Feature explanation: The second tab, “Annual Trends by Region,” shows you the annual trends of a selected indicator for other other countries in the region. In addition to narrowing the year range, you can also select and deselect countries on the legend for a more focused comparison.

"Quick and dirty” EDA: One quick glance allows us to see annual trends by country cluster at each index value, with no dramatically different changes in slopes. However, given the amount of overlapping lines, it would be wise to double-check our assumptions by deselecting some countries. For example, if you’re interested in spillover effects, you may only select for Zambia’s neighbors. 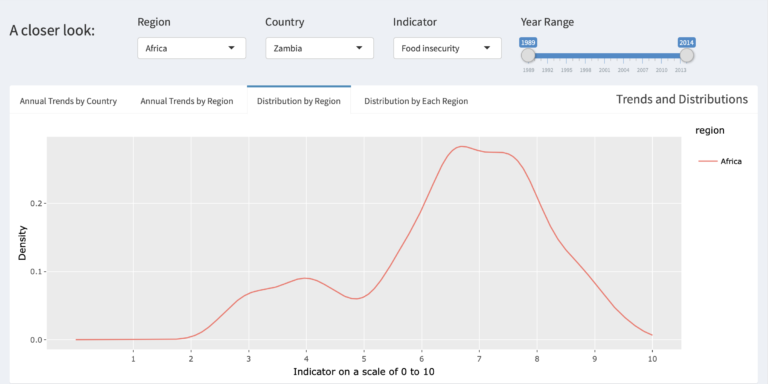 Feature explanation: The third tab, “Distribution by Region,” depicts the distribution of the data by indicator and region. As in other charts, you can narrow the year range and click on the line graph for the exact numbers.

Distribution by each region 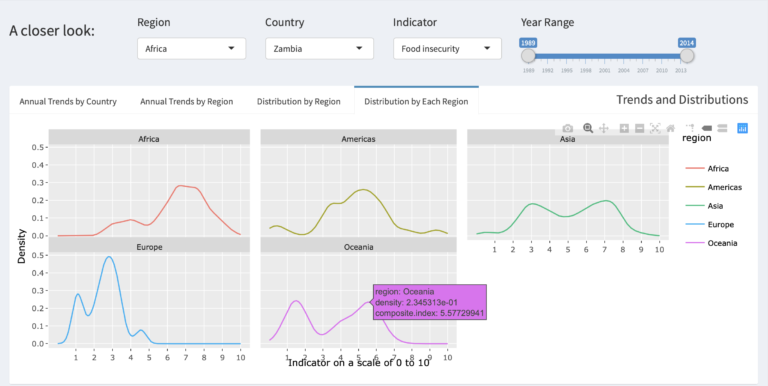 Figure 3.5 Distribution of Data on Food Insecurity for All Regions from 1989 to 2014

Feature explanation: The fourth tab, “Distribution by Each Region”, allows for a quick and easy regional comparison of the distribution of data for a selected indicator. As in other charts, you can narrow the year range and click on the line graph for the exact numbers.

"Quick and dirty” EDA: The graphs clearly illustrate that the distribution for food insecurity differ dramatically by region. To examine these differences, you can restart the entire “quick and dirty” EDA process for other regions and countries within those regions.

"Quick and dirty” EDA: We can see likelihood of conflict intensity is most strongly correlated with conflict prevalence, such as history of conflicts (YRS_HVC). If you were interested in exploring the effects of food insecurity on conflict intensity, you can eliminate that research question straight away after visually seeing low correlation between the two. So what is highly correlated with food insecurity? The most promising positive relationship involves infant mortality at 0.81, followed by GDP per capita with a correlation coefficient of 0.79. A commonly chosen threshold for high correlation is 0.70, but depending on the topic and research question, you may choose a higher cut-off at 0.80.

Some other highly correlated indicators (0.70 and above):

If you have any questions or comments, please feel free to reach out to me on LinkedIn or GitHub.

You-Sun Nam is a Data Science Fellow at the NYC Data Science Academy. With programming fluency in Python, R, and SQL and an academic background in statistics, she specializes in executing data science projects backed with rigorous research...
View all posts by You-Sun Nam >