Consumer-to-consumer (C2C) stores offer an interesting model for market interaction where an electronically facilitated interaction occurs between consumers through the help of a third party. These stores are becoming increasingly popular throughout various industries. Websites such as Craiglist and eBay are good examples of functioning using this business model. In a society that is becoming increasingly dependent on e-commerce, especially with the advent of social media and influencers and the more recent effect of the global pandemic of COVID19, I found it interesting to explore the workings of a C2C e-commerce store. The store I ended up picking based on the available data was a French e-commerce Fashion Store.

The dataset contains web-scraped information about a fraction of the registered users (~98,000 users) of a French C2C website (established in 2009 in Europe) which has over 9 million registered users. It contains user information by gender, country, language, apps, the number of products on their wishlist, the number of products they list to sell and buy as well as their social media presence. Additionally, there is data about the top sellers among the users subscribed to the app.

For my data exploration project, I chose to use the web scraped data to analyze the seller and user information based on a variety of characteristics. I also analyzed the shopping habits as well as the top sellers information to present a holistic view of the analytics of a retail store, help monitor the health of the store and identify the key markets, users, and sellers that could be targeted to improve engagement. 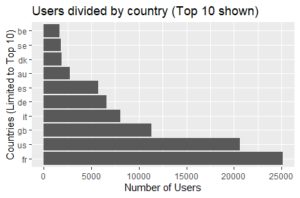 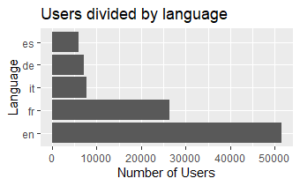 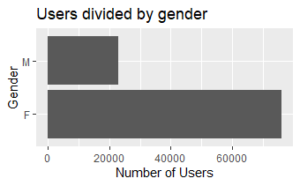 Through the graphs on the side, it is clear that the countries with the biggest market for the target users are France, USA, Great Britain, Italy and Germany. However, the majority of the users use English as their preferred language, followed closely by French, Italian, German and Spanish. The users are predominantly female, men make up only 1/4th of the users.

It is also surprising to note that the majority of the users of the e-commerce fashion store do not use the app to buy or sell products as can be seen from the above graph. Surprisingly, Sweden, Denmark, and Belgium have the highest number of app users, despite the fact that they don't have the highest turnaround. This indicates that there is potential for the store to expand the market with people who use the store but are maybe not incentivized enough to use the app. 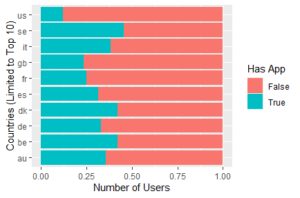 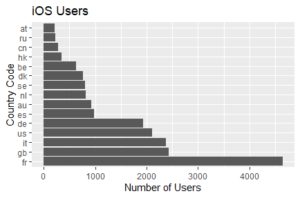 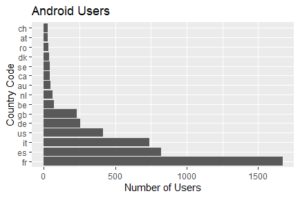 Additionally, we can recognize that there is some relationship
between countries with the most users and if they used an app or not. However, it is harder to find a relationship between iOS and
Android using countries. It seems that iOS in general is more
popular than Android among users, but that does vary by region. A lot more Spanish users used Android apps in comparison to iOS apps. However, American users favor the iOS version. 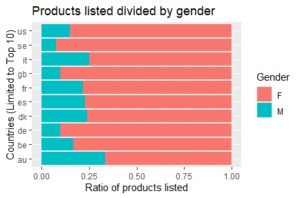 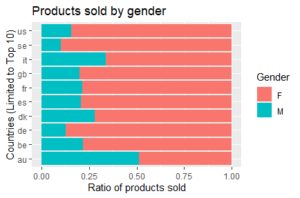 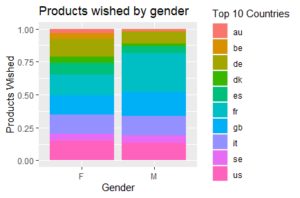 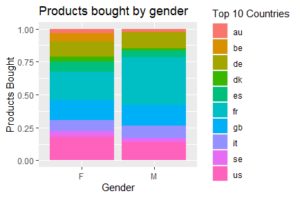 Based on the user market, one may have expected to see a large number of French, American and UK sellers. In fact, though the top seller market looks different from the users market. The top sellers belong to one of the following 10 countries: Latvia, Romania, Sweden, Bulgaria, Germany, USA, Spain, UK, France, Italy. However, it is interesting to note that the maximum sellers come from Italy. Additionally, countries like Latvia, Romania and Bulgaria are also quite unexpected. It is possible though that these countries provide cheaper alternatives to clothing in comparison to some of the other more prominent EU companies.

A key limitation of this work is that the dataset is only a subset of the users of the fashion store. So most of the identified trends might not hold up when assessing the entirety of the 9 million subscribers. Also, no real analysis can be performed on the basis of the number of iOS and Android users as the trends of the people who own these phones do not follow the trends we observe in the dataset.

A preliminary analysis of the subscribed users of an e-commerce C2C French Fashion store was performed using the Kaggle dataset. Several interesting insights were obtained, including the breakdown of users through their country, gender, and preferred language. Additionally, it was observed that there is a big opportunity for subscribed users to be converted into using the website app. Moreover, some key markets for users who list and sell maximum products were identified. In addition, the top sellers across the platform were also identified.

However, there is a lot of future work that can be done using the data. Several elements that were not explored include the identification of the social media activity, followers and following accounts. This could indicate which users could be incentivized to promote the use of the app. Additionally, the preferred languages could be grouped by the countries the users belong to in an effort to personalize their experience of the website as well as the app.