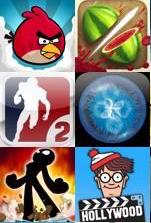 In today's modern industry, one of the pivotal points in our lives is our smartphone. We spend an exponential amount of time on our phones and the activities we choose to do with them may vary, but the consistency in it all is the amount of games the general population plays. In just the apple app store, there are over 800,000 games available for download. Which really puts an emphasis on how much people have a desire to play games. It is safe to say, that the industry in mobile gaming apps, is booming.

My interest in this topic stemmed from the amount of games I interact when I am trying to kill time or even when I just want to relax. This game me an insight on how popular mobile gaming apps are and that I have a passion for what I have played with in my lifetime. Even though I have played with a numerous amount of games, I have barely even scratched the surface of the content out in the market. After some research, my curiosity grew more on the topic and wanted to share the knowledge I've obtained in my research

I wanted to start this project off by giving myself a challenge by web scraping something big, scraping the entire app store of all its mobile games. Collecting data such as: name, size of the app, genre, price of the game, how much in-app purchases were. This data collection with scrapy to take all of the fields requested and take 250,000K+ apps would take a little over 4 days to complete. I had to get creative and settle for some of the most popular games along side of the fields I scraped.

After some EDA, I discovered that only a small percentage of apps are considered popular. With a high volume of gaming apps, there are only a couple hundred that are considered to be popular. However, only one game stood out beyond all other apps with an astounding 2.2M reviews and a 4.6 rating...Fortnite. It is a well known sense that Fortnite would obviously be the top game, but I did not considered by how vastly much the difference was. The chart below displays how over 200 games compare to Fortnite in the runnings. That being the only one in its own area. 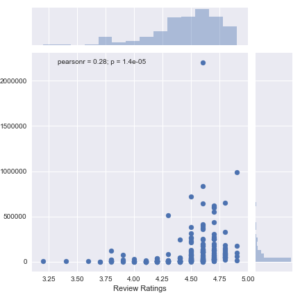 Comparing this to the mean of both average rating reviews and number of review below.

These results show in order for an app to be popular, it needs to have at least 10,000 reviews and 4.45 average rating. If a company wanted to find a way to get their app to be under the popular category, they would need to be able to obtain those stats. However, obtaining that type level of achievement is fairly difficult and wish I had enough time and resource to explain what was needed to reach that for new/growing gaming apps. I would consider factors such as their UI, marketing scheme, weekly/monthly revenue, frequent updates and their customer loyalty. This would help me analyze the requirements needed help a start up/growing app to be truly successful.

Richie Bui has experienced knowledge working with collecting, processing and capturing large datasets while working with Medtronic the past 3 years. Closely working with his colleagues in engineering, product management, and bio-statisticians to gather information on the medical...
View all posts by Richie Bui >