R Shiny - Data Analysis on the Public Safety in Boston

Covid-19 changed our life style by making people staying home and to work remotely. I therefore moved from New Jersey to Massachusetts in order to stay with family. I’ve never travelled Boston for such a long time and that made me curious about the living environment and the social data of this city.

From the website of Boston government dataset under the category of public safety, I found a dataset released by the Boston Police Department that contains crime incident report between year of 2016 and 2019.

There are 544,660 samples in total with 19 columns. Before analyze the date, I notice that samples from 2016 to 2018 are around 100,000. However, the sample of 2019 is extremely high with a number of 25,004 rows. Another thing I found is that even though Boston government named this dataset as crime incident report, I would consider it as a violation report instead because the incident contains vehicle accident, towed, and some others that are not as severe as crimes.

I used Shiny, ggplot2, leaflet, and dplyr packages within R Studio to create an interactive dashboard of data visualization. 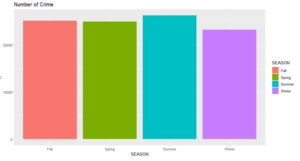 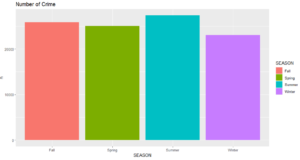 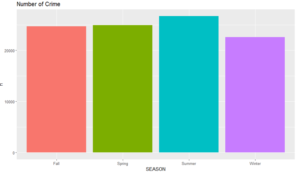 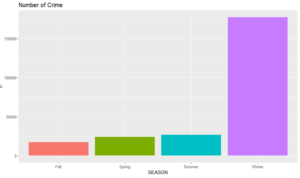 Since season is a fact that affects the number of violations, I the wondered whether the day of the week would be the fact as well. However, after analyzing the data, I found that there is not much difference among the days. 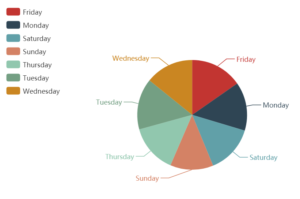 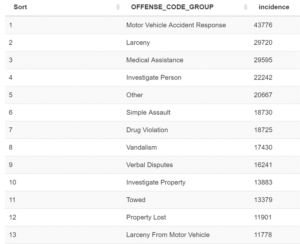 When looking into the violations of each district, I found that below districts had the most violations. If one is searching for residency in Boston, I would not suggest him or her to search below district for domestic purpose. 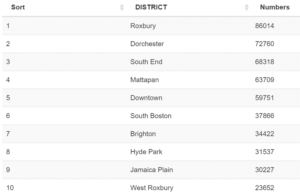 Below shows the ratio of violation with gun shooting involved and without. Among the violations, the ratio of shooting is only 0.004768, which is not a large ratio compare to non-shooting violations. 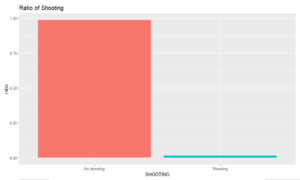 After plotting the location of all the gun shooting on map, we can easily tell that most of the gun shootings were taken place in south Boston. Recall the analytical frame I attached above regarding numbers of violations by district, area below with the most blue dots are the districts showing on the frame such as Roxbury, Dorchester, and Mattapan.

This data analysis study answered by inquiries at the begin of this project. From this project, we can tell that Boston is safe to live with a low rate of gun shooting. Some violations are not harmful to residents in Boston. However, there are some districts that have more violations than others. With all the graphs and charts I’ve done, I wish this project not only provides answers to my personal curious, but also advices to people who plan to live in the Boston area.

Cassandra Jones is a certified data scientist with a focus on data science technologies and banking. Working at investment bank for 4 years on client services. Passionate about any data driven business insights going forward...
View all posts by Cassandra Jones >