Chronic Diseases and the Emphasis on Prevention

Chronic diseases, such as heart disease, cancer and diabetes are among the most common and costly health problems. According to the Center of Disease Control and Prevention (CDC), “half of all American adults have at least one chronic condition and almost one of three have multiple chronic conditions”. Apart from the cost burden, heart disease and cancer are the top one and two causes of death in the country. While, diabetes ranks a little lower as top killer (#7 in 2011), its cost burden and effect on patients’ quality of life make it a top concern for physicians. For these reasons in 2014 the CDC released a study on the national indicators of chronic diseases and some of the findings are cause for concern.

Cancer: The average mortality due to different cancer types (over the years 2008-2012) show that lung cancer is the most lethal form (Figure 1). 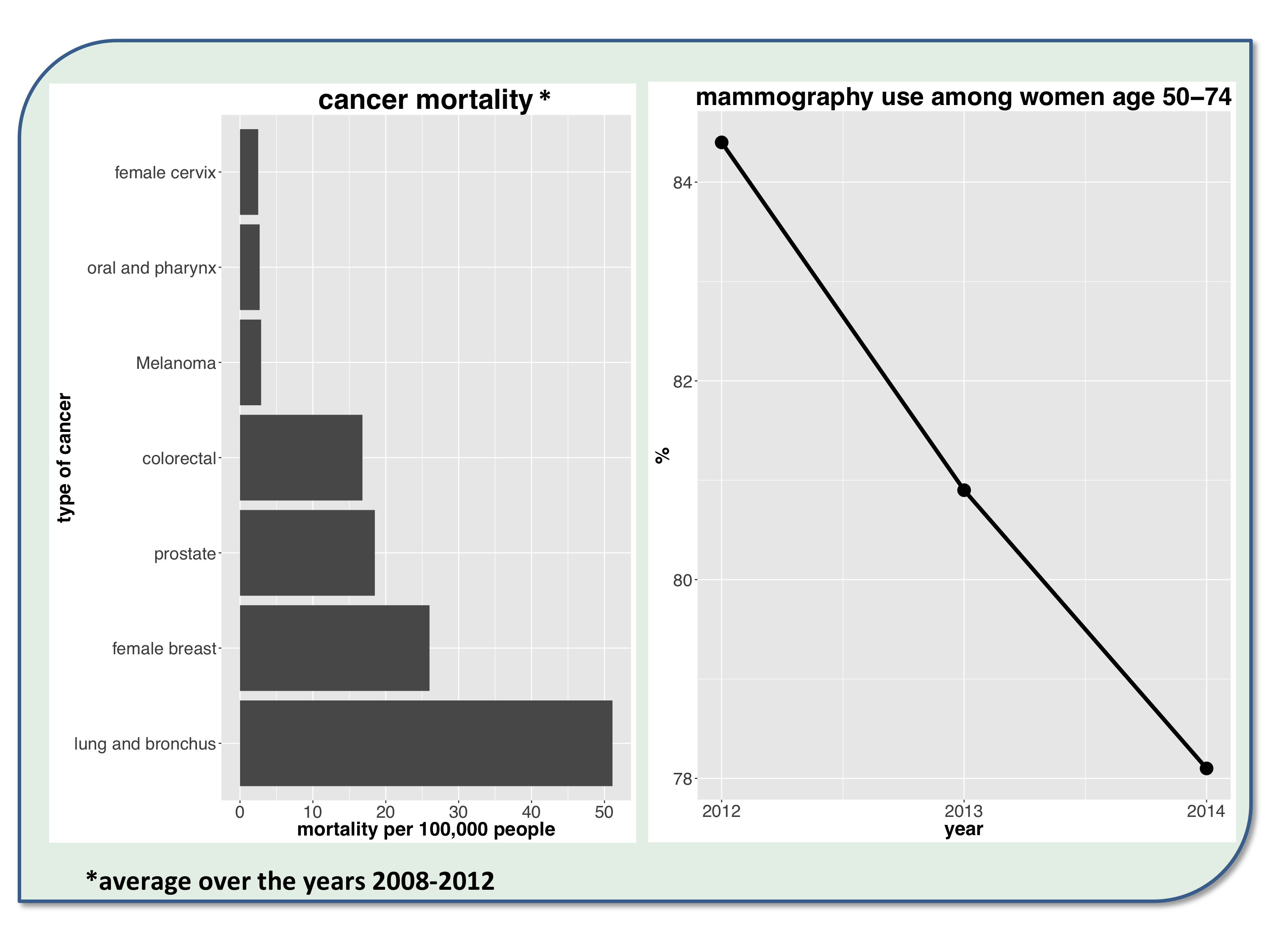 Unfortunately, there is no routine screening protocol for lung cancer and the disease is not uncovered until the patient has symptoms. For many types of cancer, early detection can be a vital factor in determining if the patient survives. This is the case for female breast cancer, which is shown to have the second highest mortality rate. Early detection of breast cancer is achieved through routine mammography screening. Unfortunately, the indicators show that the use of mammography among the most vulnerable age group of women, ages 50-74, has gone down from 2012 to 2014. The reason for this is not clear, and further research is needed. It is possible that there has been a change in the how insurance companies cover mammography screening.

Diabetes: The indicator for the prevalence of diabetes may also be following an unfavorable trend. The percent of adults diagnosed with diabetes went up in 2014 compared to the two previous years (Figure 2). 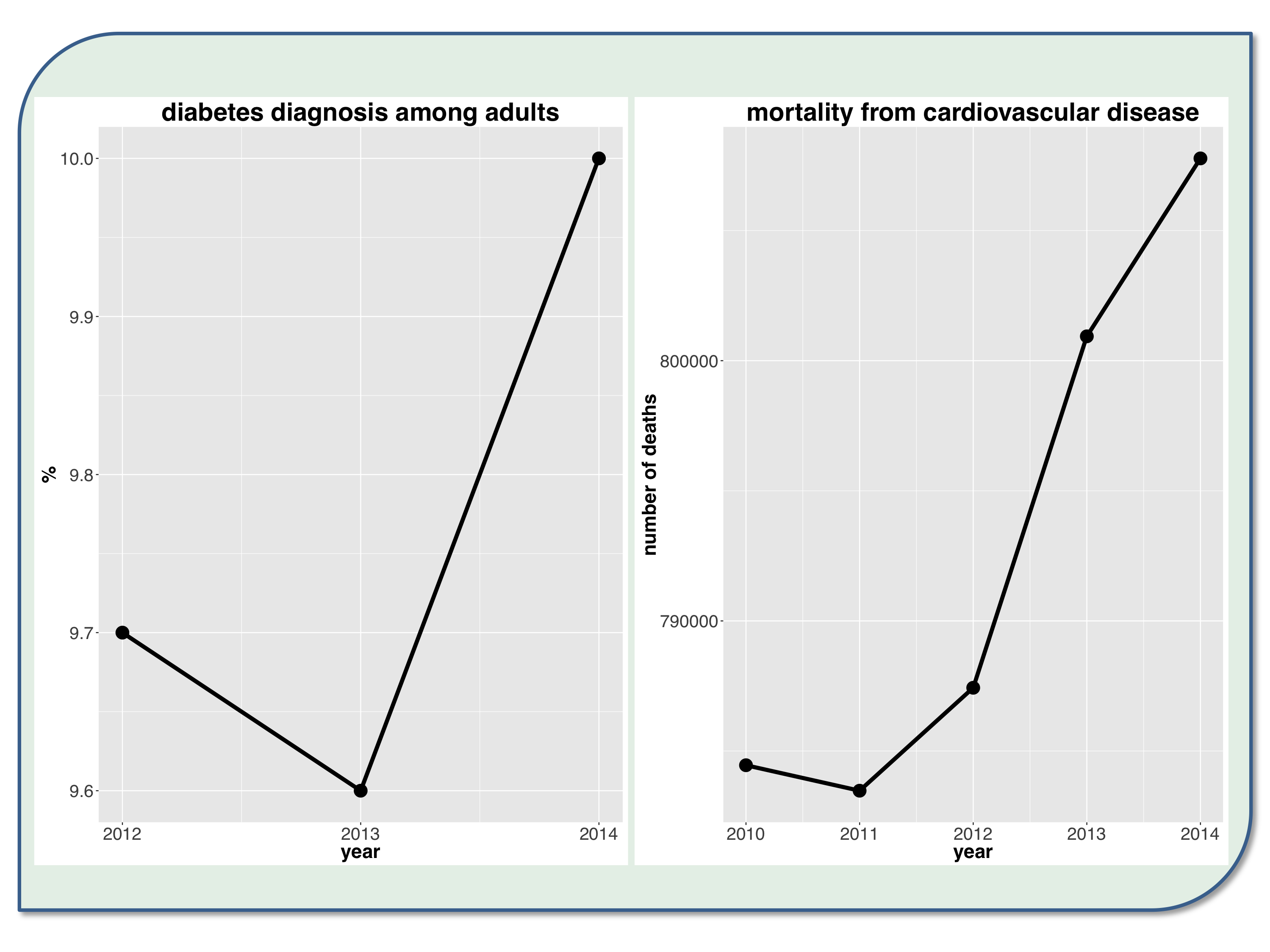 However, there is a caveat here.  The year 2014 was also the first year of national open enrolment for health insurance through the Affordable Care Act. Hence, while the increase in diagnosis that year may be an indicator that more people are getting diabetes, at least some of the rise in diabetes diagnoses in 2014 may be due to the fact that more people were insured and were getting tested that year. One of the striking trends in the prevalence of diabetes is the strong geographical factor. Figure 3 shows that the percent of the adult population that have diabetes by state, varies drastically on location.  An adult living in West Virginia is twice as likely to develop diabetes as one living in Utah. Hence, when it comes to diabetes, where you live matters! This trend underscores the fact that type-2 diabetes is preventable and that changes in diet and lifestyle can have a big effect on the chance of developing the disease.

Cardiovascular Disease: The number of deaths in the country from cardiovascular disease has been steadily climbing since 2011 (Figure 2). 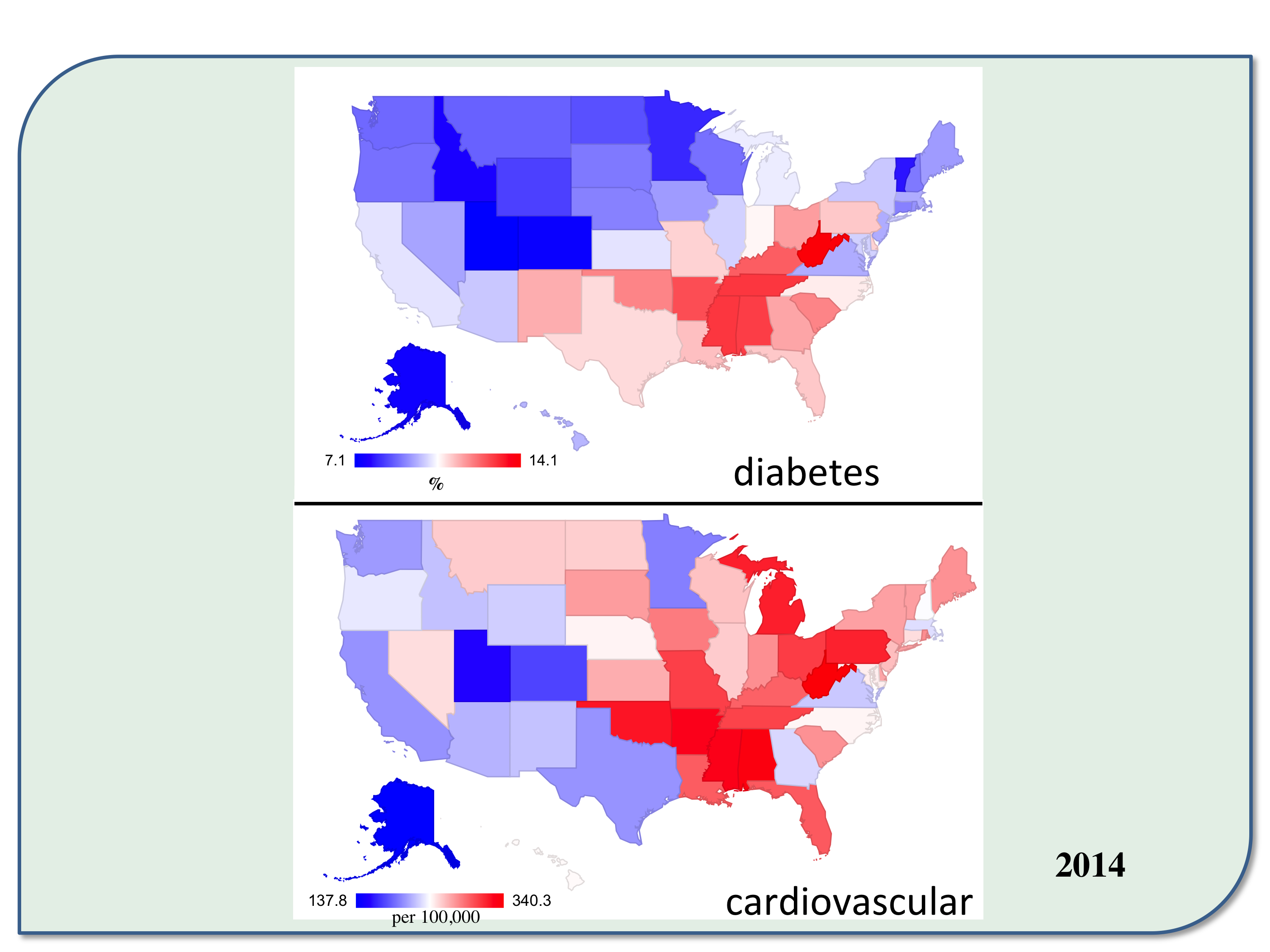 While, the national chronic disease indicators show a number of disheartening trends, it is important to emphasize that we can do something about them. Type-2 diabetes and cardiovascular disease can in many cases be prevented with proper alterations in diet and lifestyle.   Cancer mortality can be reduced by diligent screening. Chronic diseases, more than any other ailments, can be attacked by concentrating on the prevention side of the medical equation. And a sustainable national healthcare policy must underline this approach.