Which NYC Public Schools Score Highest on the SAT?

This project will explore data that New York City publishes on its public school system. The city provides a large amount of public data, which can be easily accessed through the NYC Open Data website. The goal of the website is to provide access to public city data to all so that anyone can analyze and improve government services through a better understanding of the data. This project will focus on two datasets provided by the New York City Department of Education (NYCDOE) on the city's public school system:

The first dataset includes the most recently published SAT scores for each school and extensive data on the learning environment, while the second dataset includes location data of each school. Although there are additional datasets that we could include in the analysis, for consistency we will only focus on data from the 2014-2015 school year.

First, we'll perform some basic exploratory data analysis on the SAT data. As background, the SAT has three sections (Math, Reading, and Writing) worth 800 points each, for a maximum total score of 2400. In our dataset, the mean public school score is 1273 and the median is 1227, meaning the distribution is skewed slightly to the right with more high-scoring outliers. 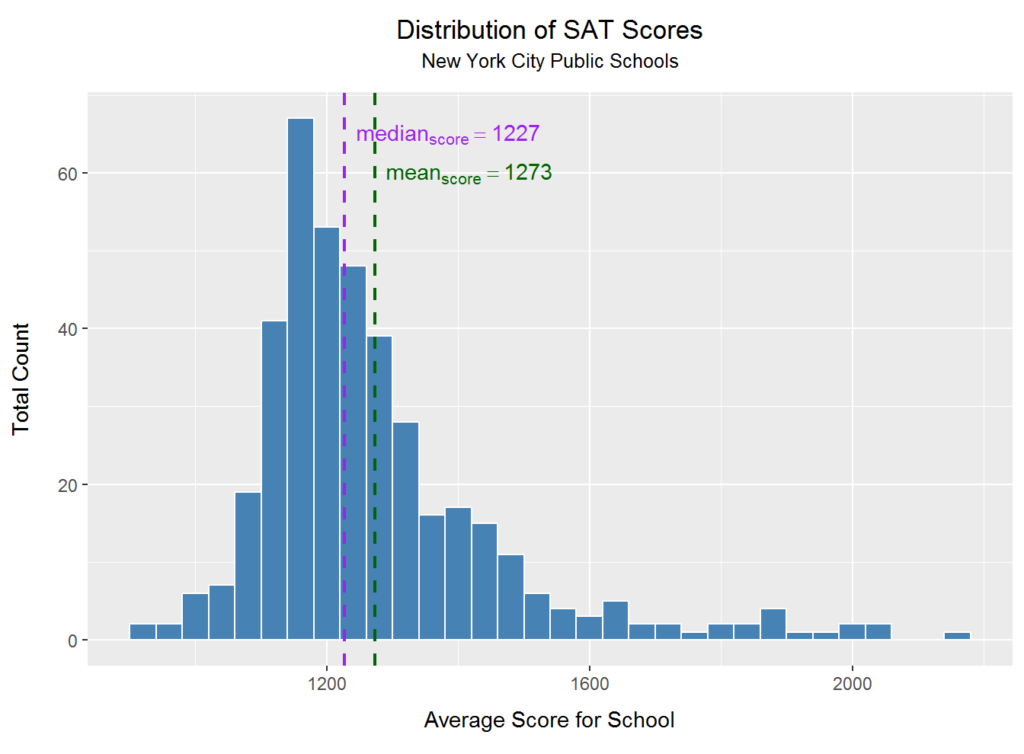 In total, there are 491 public schools in the dataset. Schools with fewer than 10 test takers do not have scores available in the dataset and as a result, 82 (or 16.7%) of the schools are missing an average SAT score. This may be a case of missingness not at random (MNAR), as schools with fewer test takers could arguably be the schools that score the lowest, which would affect the analysis. However, as this is the outcome variable, we are unable to impute this value and therefore this analysis will only focus on schools that have scores available.

Each SAT score is comprised of results from three section: Math, Reading, and Writing. Each subsection has a similar score distribution, as seen in the violin plots below. 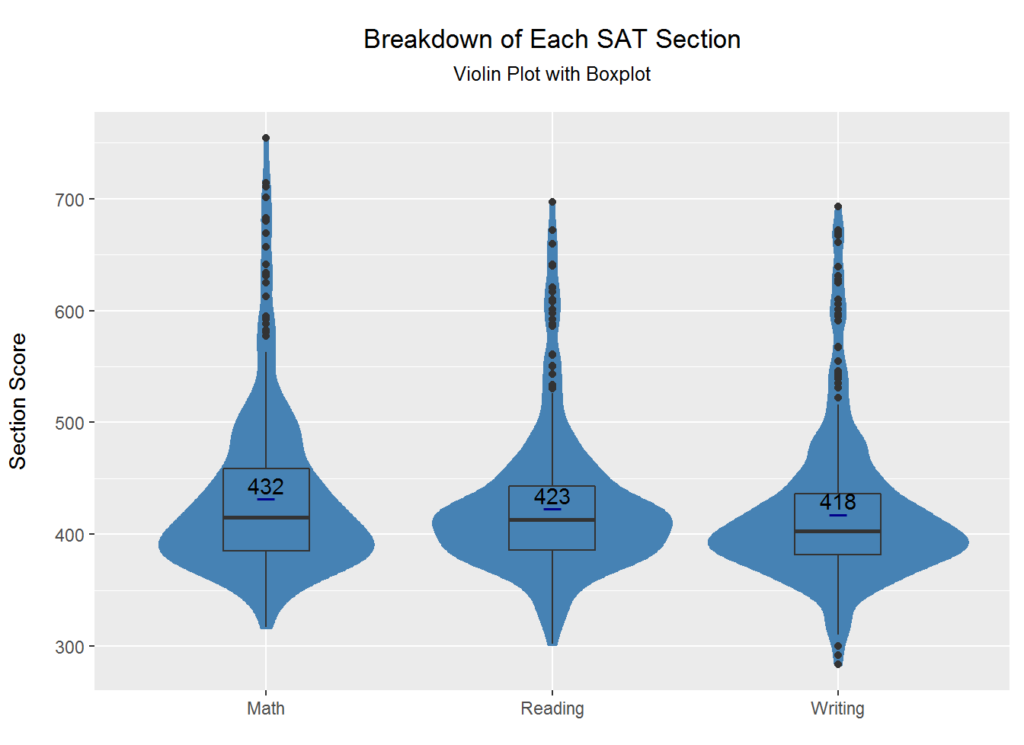 The boxplots within each violin plot show that the Math section has the highest average score of all the sections (432), followed by Reading (423), and Writing (418). Math also has several high outliers, indicating that a few schools have a relative strength in Math.

Lastly, if we run a correlation, we can see that the scores for each section are highly correlated with each other, meaning a school that has a high or low average score on one section will very likely have a similar score on the other two sections. As we might expect, the Reading and Writing sections are more closely correlated with each other (+0.99 correlation) than with the Math section (+0.93 and +0.94, respectively). This is unsurprising as the Reading and Writing sections test very similar skills, so a school that does well on one of these sections could be strongly expected to do well on the other. 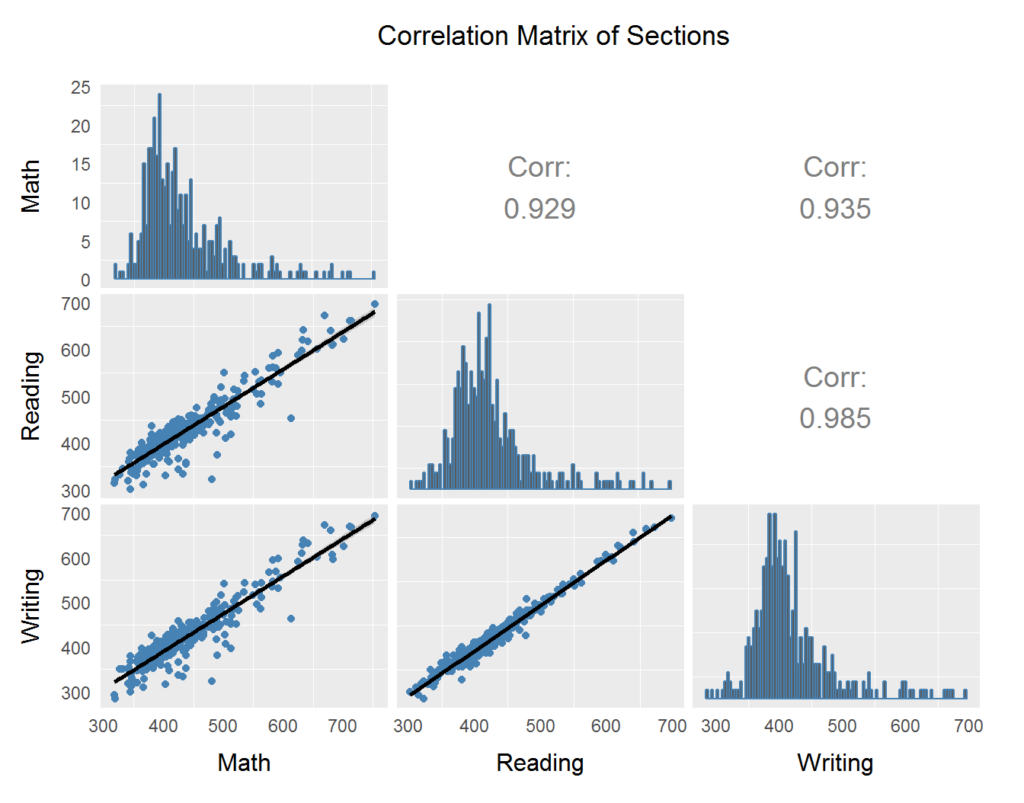 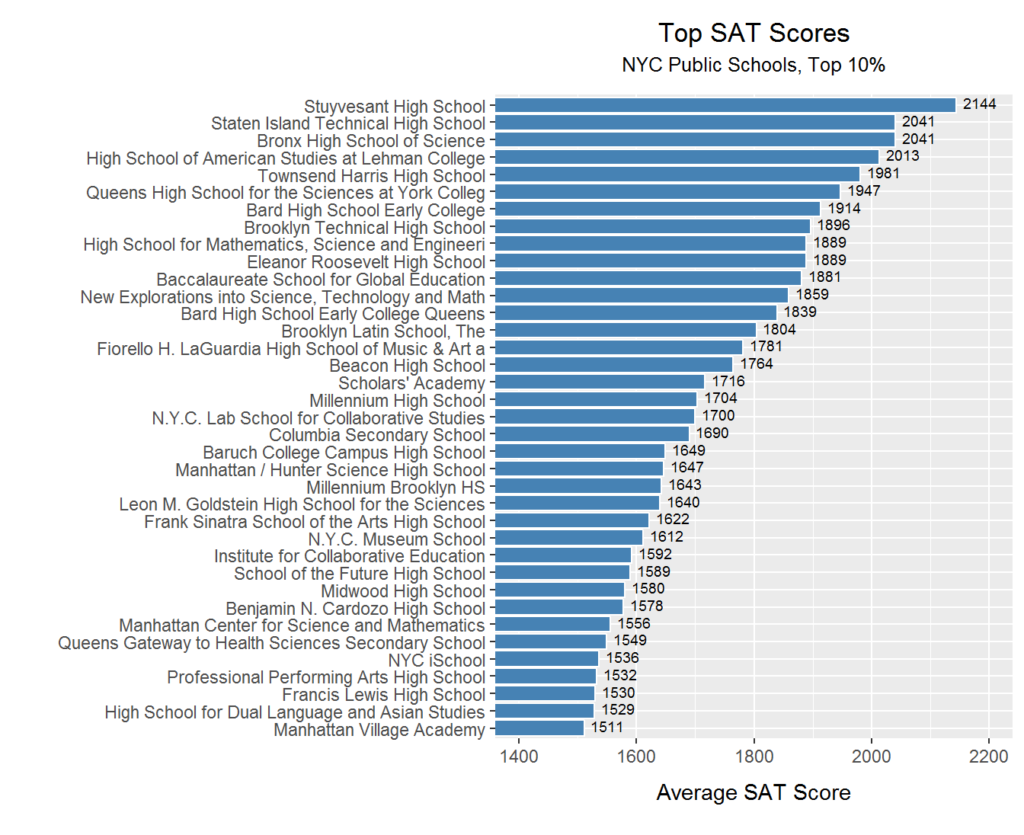 We can also view the top schools by section. Almost all of the schools in the top 10% scored higher on the math section than either of the other sections. As we can see in the section breakdown, some schools are stronger in Math, but weaker in Reading and Writing, and visa versa. Unsurprisingly, schools that have the words "technical" or "science" in their name do better on the math section, while schools with the words "art", "music", or "bard" tend to be stronger in Reading and Writing. 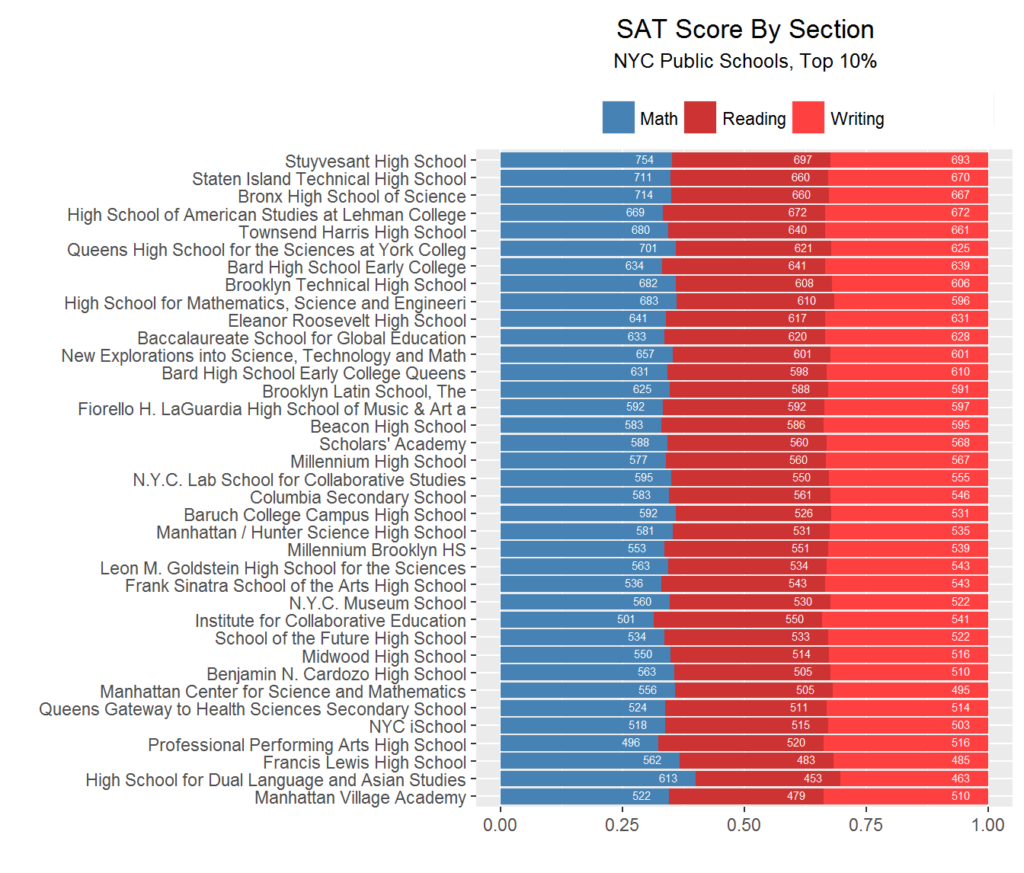 Similarly, we can look at schools that are in the 10th percentile, or bottom 10%. Keep in mind that schools with less than 10 students taking the SAT do not have their scores available in the dataset, which could potentially affect our analysis. These missing observations comprise 82 (or 16.7%) of the NYC public schools in the dataset. 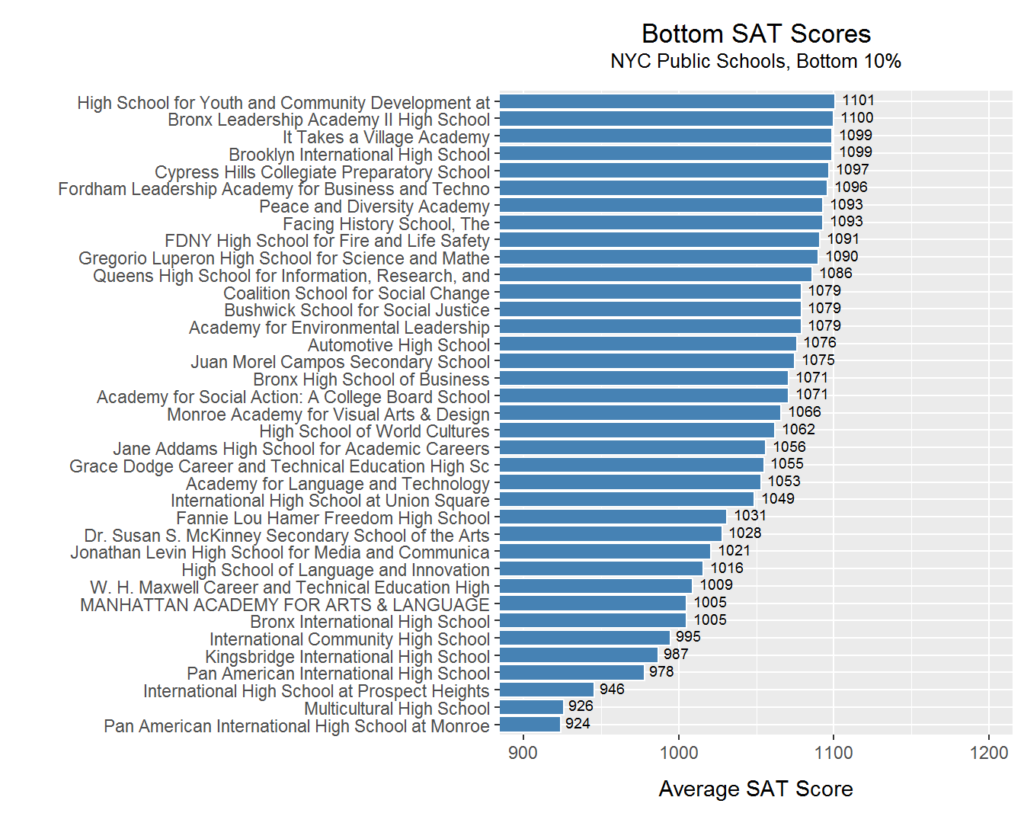 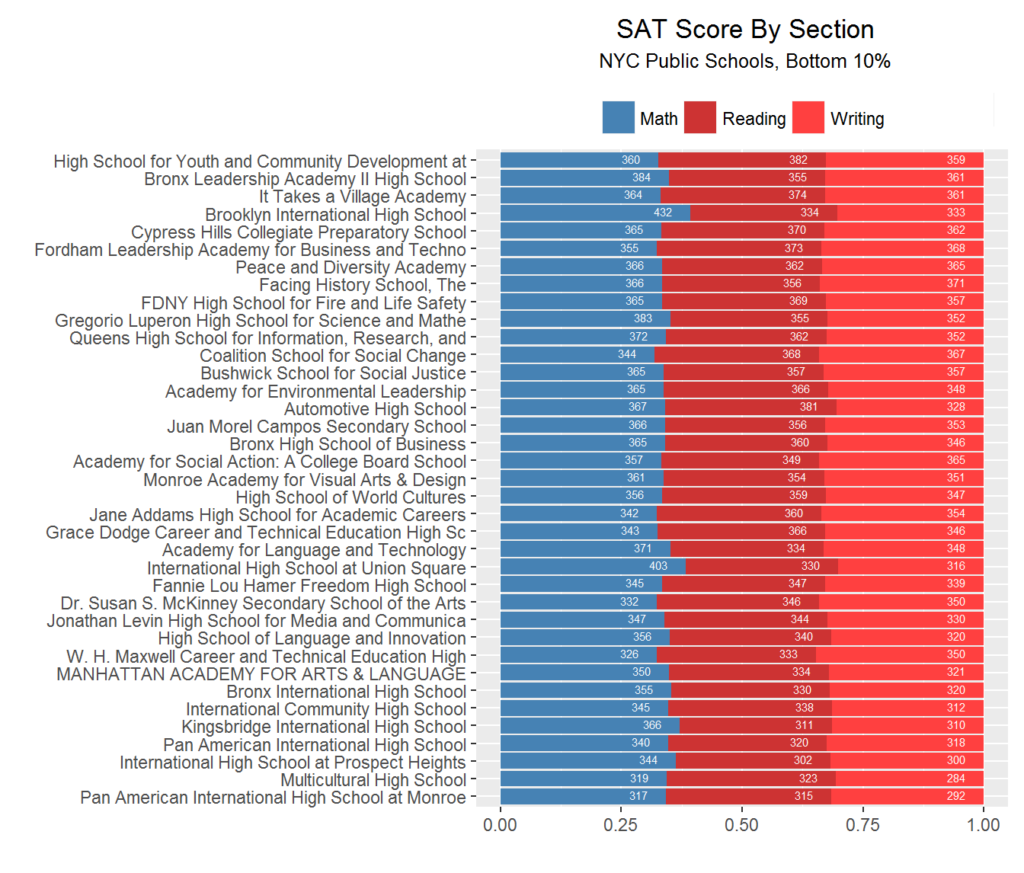 In general, some schools have a much stronger math score than reading and writing scores. 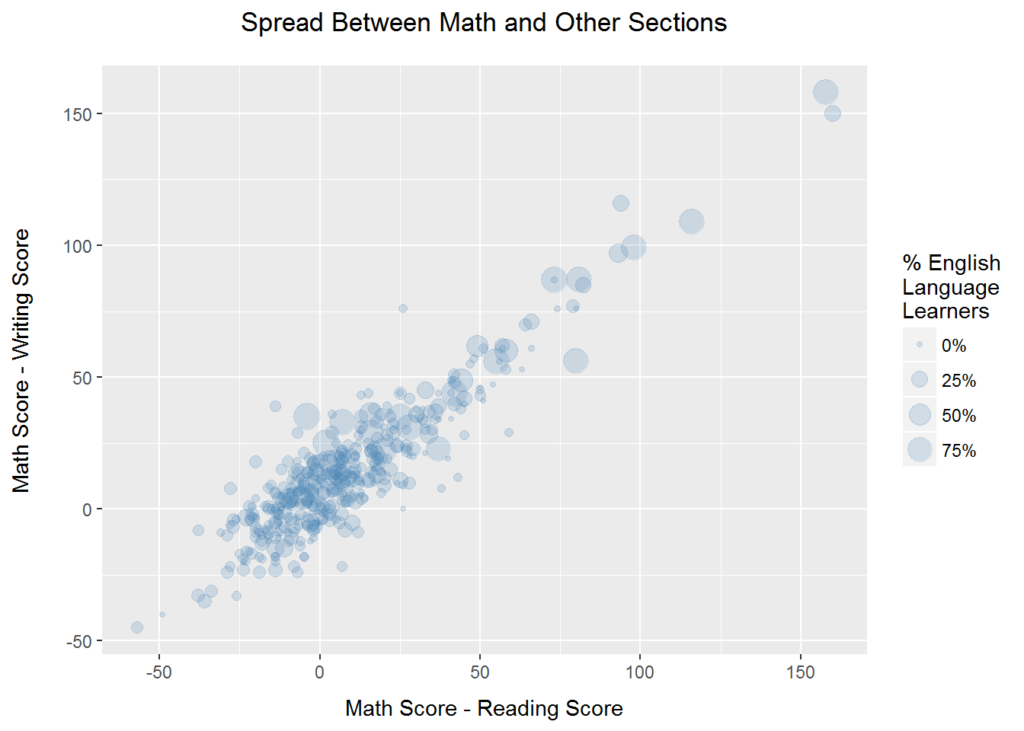 The school with the highest spread between sections is Flushing International High School, which has an average math score of 481, but reading and writing scores of 323. This spread of over 150 points is likely due to the fact that 81.7% of students at this school are English Language Learners (ELL), or non-native English speakers, which is a significant disadvantage for reading/writing. What other characteristics can we look at to explain school performances? 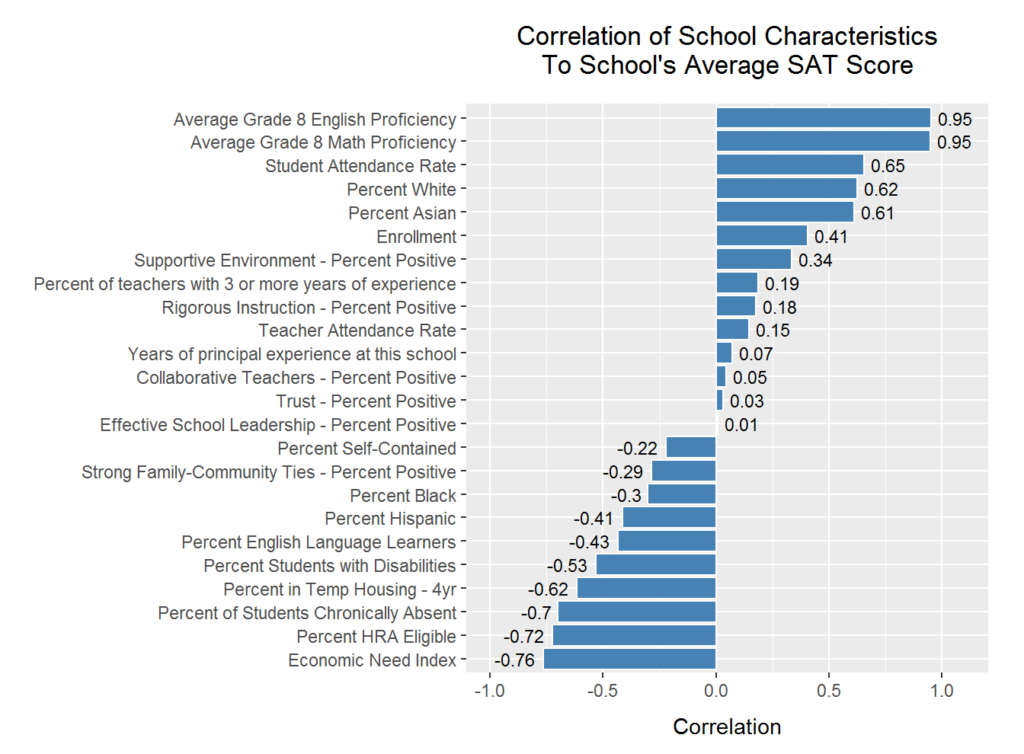 The breakdown of characteristics to each the average score on each section is fairly similar: 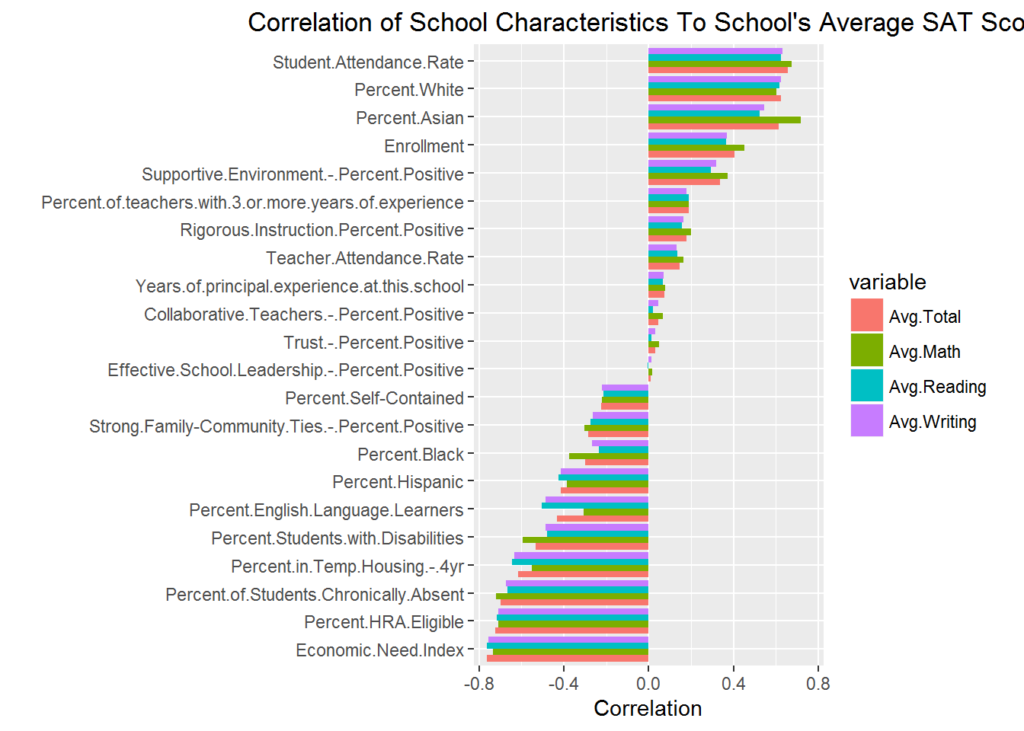 Below, student attendance rate is plotted against average total score: 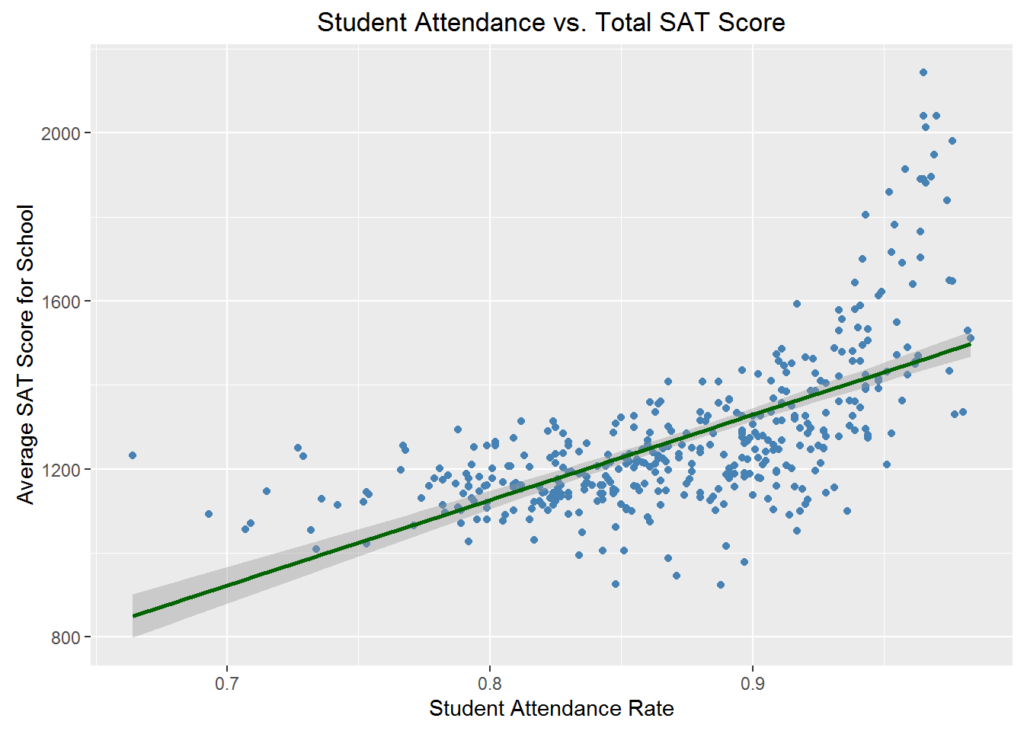 And the most negative factor: 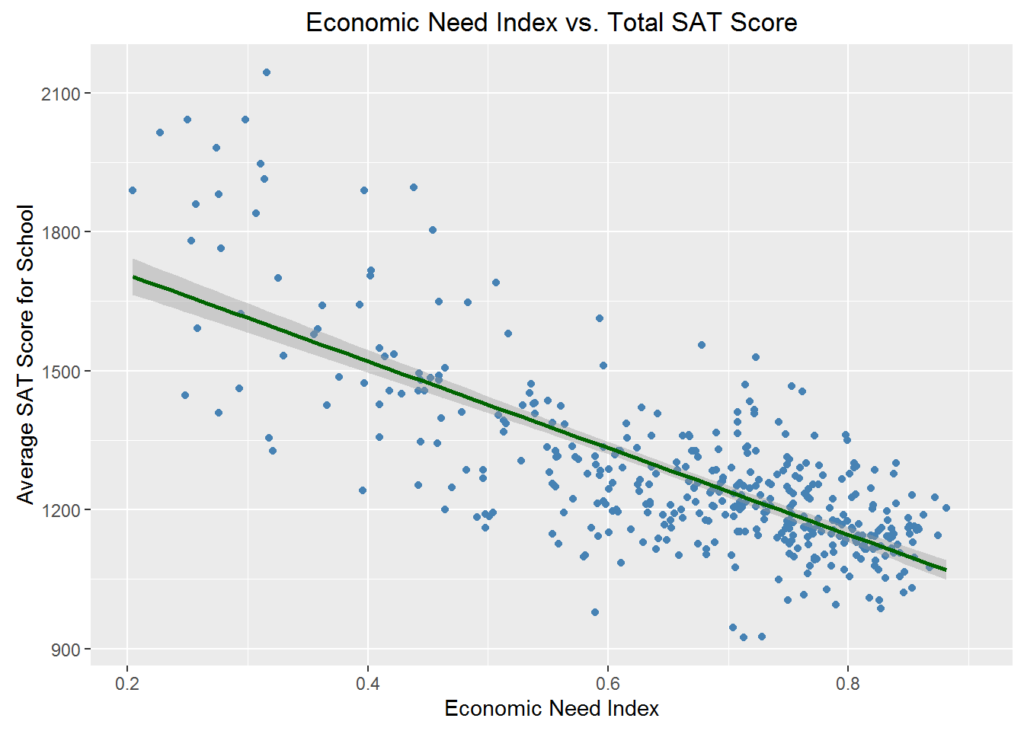 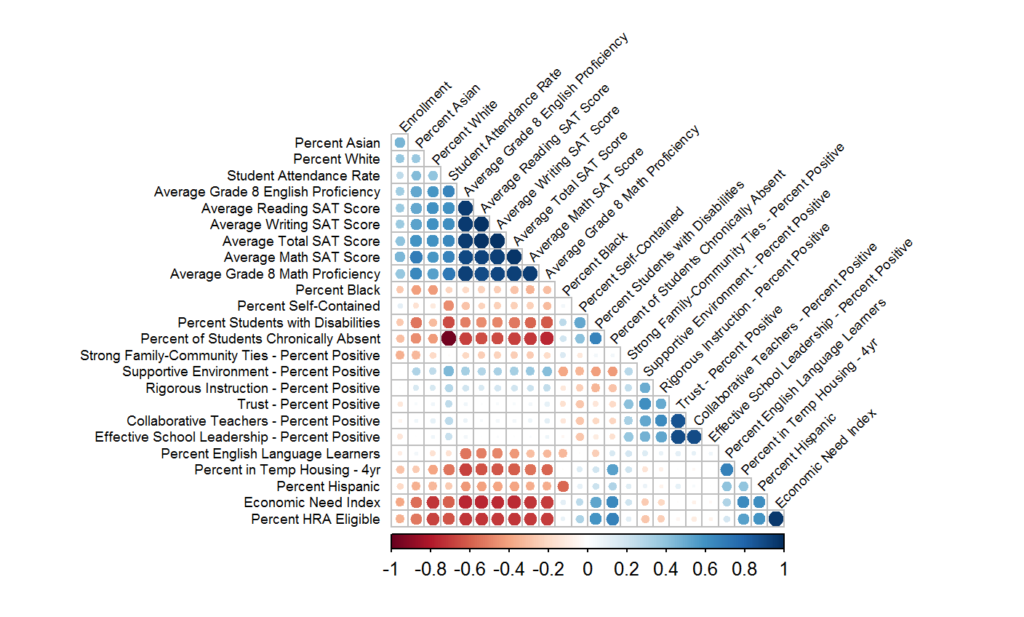 Because of the large number of variables and high multicollinearity, we can perform a principal component analysis (PCA) to reduce the number of dimensions in the data and identify the dimensions that account for the most variation between observations.

We can see that some of the variables are essentially repetitive and measure the same underlying metric.

First, we'll run a multiple linear regression using all the variables. The resulting model has an adjusted R² value (coefficient of determination) of 0.9431 and the regression is statistically significant (p-value < 2.2e-16). We can see the relative importance of each variable in this model below. This graph uses Shapley Value Regression, an averaging of the sequential sum-of-squares obtained from all possible orderings of the independent variables to show the percent contribution of each variable to the model. 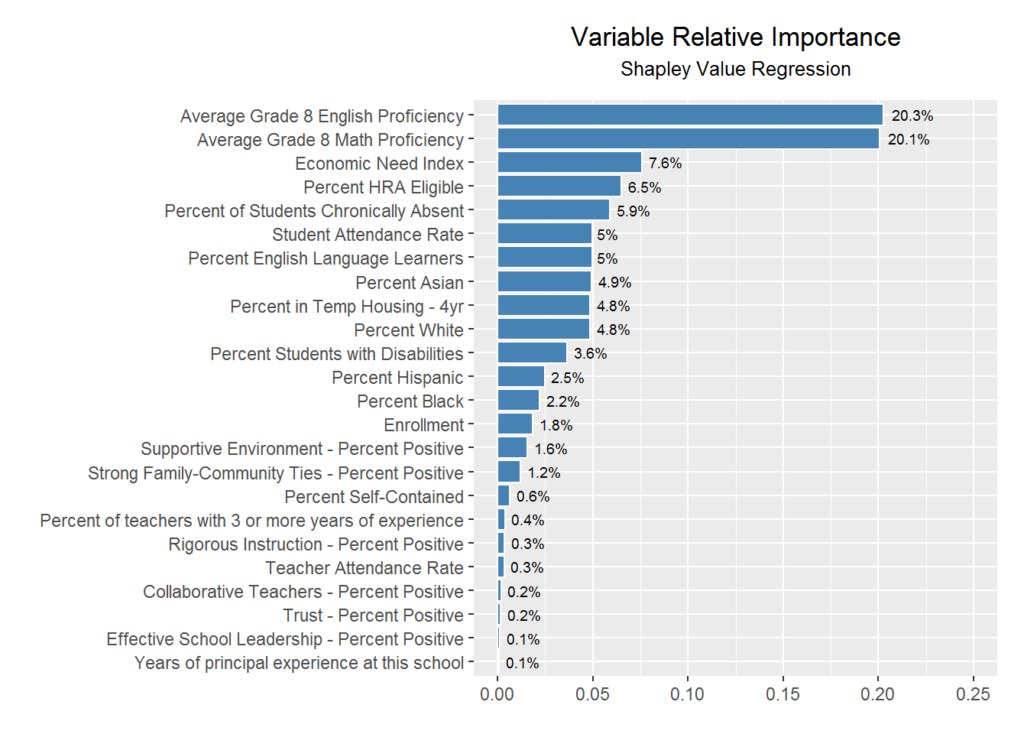 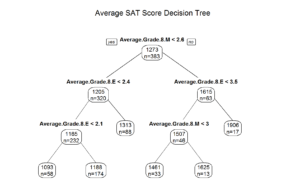 The standardized tests have the highest variable importance in the random forest model as well, although the other variables are ordered differently than in the multiple linear regression model. 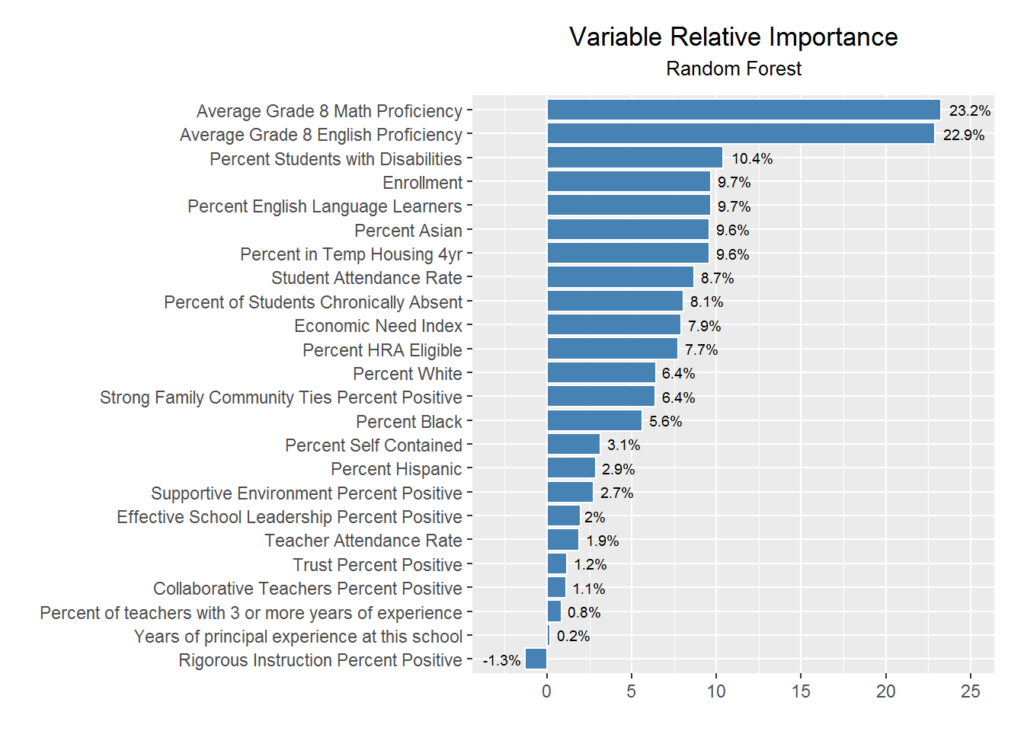 Lastly, does location play a role in a school's average score? There are too few schools in each zip code to draw meaningful statistical conclusions, but we can break it down by borough. Schools in Staten Island have the highest average score, while schools in the Bronx and Brooklyn have the lowest average scores. At the same time, Staten Island also has the fewest public schools by far of all the boroughs (10 schools), while Brooklyn and the Bronx have the most (over 120). The fact that having more schools in a borough tends to be associated with a lower score could be due to resources being allocated better when there are fewer public schools in a borough and therefore better schools, although this definitely needs additional research. 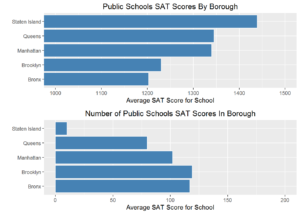 Understanding the factors that result in higher SAT scores can help schools better identify which areas to improve in order to score higher on the test. Using a linear regression model and random forest model as examples, we can see which characteristics are better predictors of a school's average SAT score. Overwhelmingly, students' standardized test scores from eighth grade play the largest role in predicting SAT scores. However, one factor that seems feasible for schools to change is the student attendance and chronic absences, which were significant in both models.

Presumably, this analysis would look similar for other years as well as for other major cities, and it would be interesting to see if there are any significant differences. Another interesting application of this analysis would be adding charter schools or private schools in order to compare the efficiency of different types of schools, although this data is not readily available. Lastly, this type of analysis could be extended to examining Regent exam scores in light of recent controversy with certain NYC schools being suspected of cheating on the Regent exams.

Please feel free to build on this analysis or to reach out to me with any comments, criticism, or other feedback.