IMDB is one of the most widely used websites for people deciding whether or not a movie is worth watching. Users can not only access movie ratings, but they can read different reviews on the movie to see why or why not it was well received. Having access to movie reviews in addition to ratings allows potential viewers a certain level of autonomy in deciding whether a movie would be "good" or "bad" to watch.

With this project, I set out to answer the following questions:

I scraped the IMDB website for the movie, Purge, using Selenium. Selenium seemed like the optimal choice because IMDB is a dynamic website with people constantly posting new reviews and ratings. Below are the fields that I thought could be interesting to analyze and chose to scrape.

The data scraped from IMDB is well formatted and so strenuous data cleaning was not necessary. Most of the data preparation was done on the review content feature. In order to maximize the information gained from the review content, the characters in the review were first changed to lower case (for uniformity), all characters that are not in the alphabet and stopwords (words that do not provide useful information) were removed, and the combined string was split into a list of words. 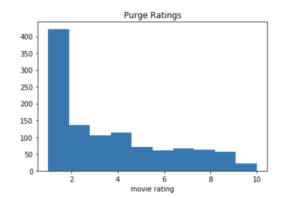 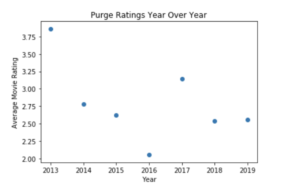 Although an overwhelming majority gave the Purge a very low rating, there is still a high variance in the ratings, so I decided to do some analysis on that. There doesn't seem to be a visible trend in ratings over the years shown above, but the rating seemed to be highest when it came out in 2013. For the main part of my analysis, I wanted to see if there were any frequently occurring words that distinguished good reviews from bad reviews. In order to do that, I split the data into reviews for ratings less than 5 (bad reviews) and reviews for ratings greater than or equal to 5 (good reviews). 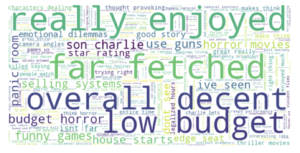 The words that show in bigger print on the word cloud represent the words that most commonly occur. Some common words in the good reviews are enjoyed, decent, and far fetched. Common words in the bad reviews are waste, plot hole, and wasted potential. It's interesting to see the commonalities in the different kinds of reviews. For future research, I would like to expand this project to multiple movies and see if common words show up in reviews among different genres. I also think it would be cool to utilize machine learning to predict movie ratings based on the different words that show up in reviews.

View all posts by Jung Choi >