If you could comprehensively view at all traffic violations for your home county, what would you want to know?   Consider the experiences of the following hypothetical Marylandian:

Mr. Smith lives in Clarksburg, Maryland, and works at the Lakeforest Mall--about 15 minutes down the Washington National Pike.  He commutes to work every day during commuter hours.  Mr. Smith is generally a very patient individual, but recently he's been sleeping poorly, waking up late for work, and having to rush to make it on time.  He has picked up several speeding tickets in the past month, and he's racking up points on his drivers license.  This cannot continue.

Bored and wide awake at 2 am,  he stumbles upon an app that uses Data.gov's publicly available dataset on traffic violations in Montgomery County Maryland to plot all electronic violations in the county for the months of June and July, 2016. 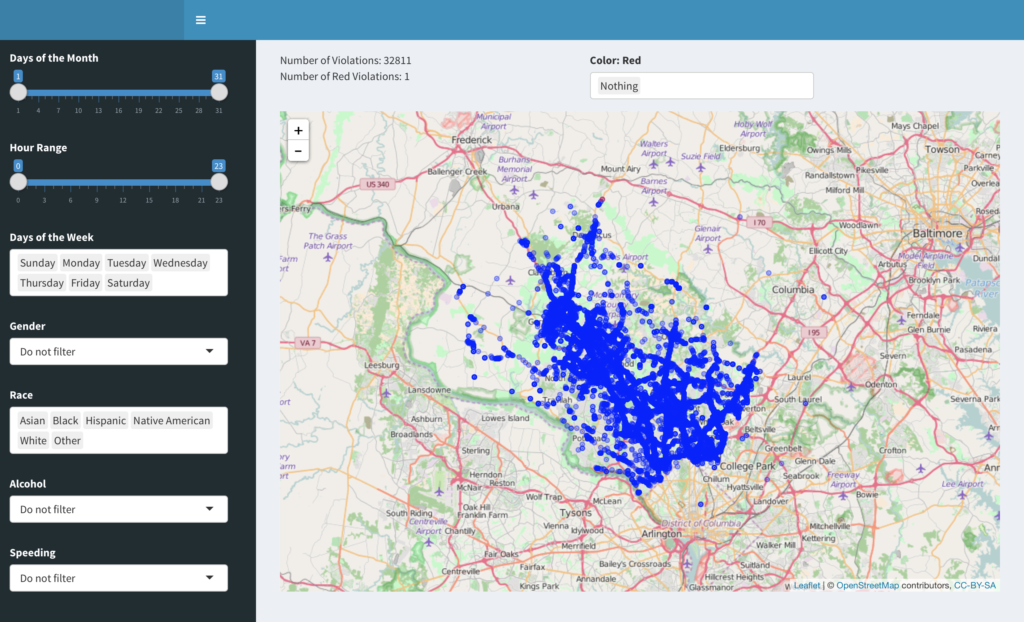 The app features an interactive map zoomed in on Montgomery County, MD, with all traffic violations plotted as blue dots. The sidebar features filtering criteria to allow the viewer to sort and visualize the data by his/her own interest.  Above the map, A scrollbar exists to add red coloring to certain types of violations.  Lastly, the number of violations and number of red violations are displayed above the map as well (the red violations count defaults to 1, as a 0-length dataset produces an error).

Mr. Smith thinks to himself, "hmm... I'm probably in this."  He then decides to see what he can make of the display.  At the bottom of the sidebar, he notices the "Speeding" scroll menu and decides to visualize just the speeding tickets.  He adjusts the hour range so that he's looking at speeding tickets during morning rush hour.  He finds the Lakeforest Mall, and immediately feels some sympathy--look at how many speeding tickets are given out around the Lakeforest mall in the morning (compared to the surrounding area)! 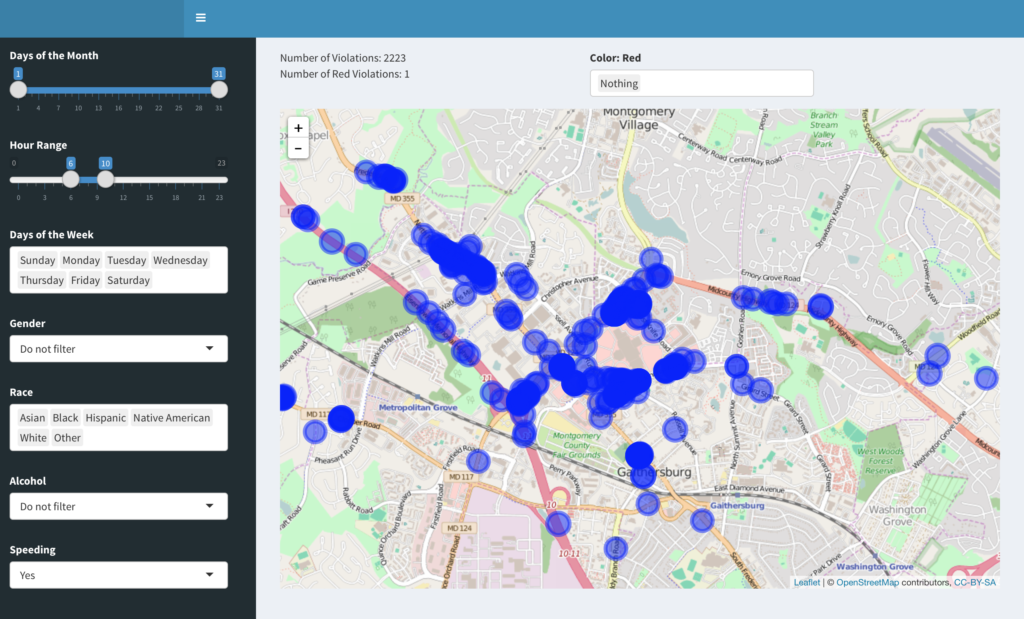 The Lakeforest Mall is the centered pink and gray area surrounded by traffic violations.

But still, Mr. Smith knows that other people sharing in his experience does not make the points on his license any fewer. However, he does notice interesting patterns involving speeding tickets on the main two roads (the Eisenhower Memorial Parkway and Frederick Road) from Clarksburg (where he lives) to the Lakeforest Mall (where he works).  He decides to look at just weekdays so he knows he's looking only at information that pertains to his commute. 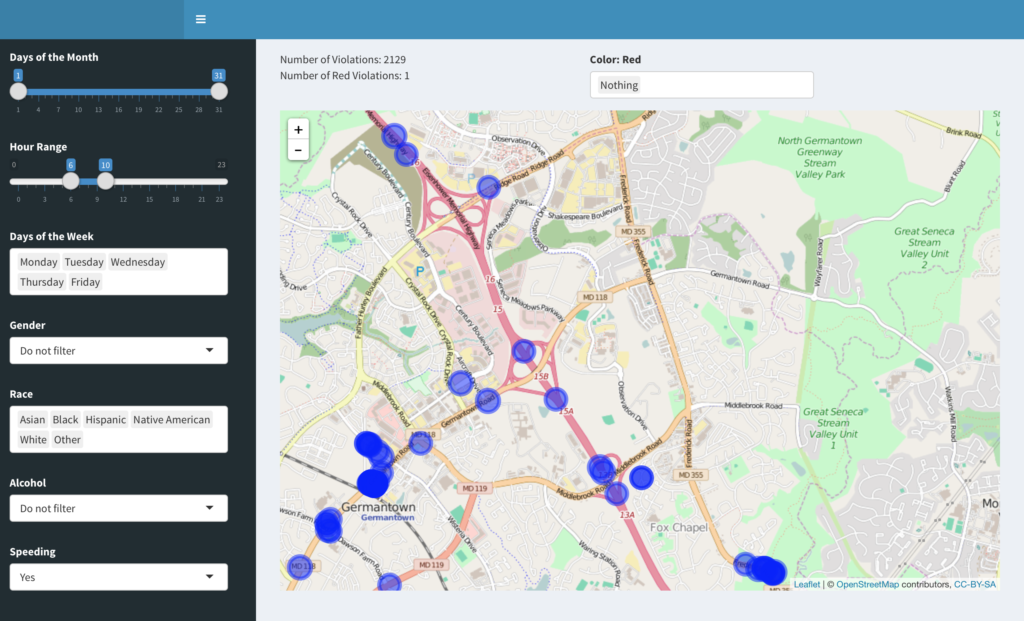 Eisenhower Memorial Highway (red) has speeding violations in several clusters spread out along its length, whereas Frederick Road (yellow) seems to have its violations concentrated towards the bottom. (Lakeforest mall is just beyond the bottom of the screen).

Mr. Smith notices that until late in his drive, there are far more speeding violations given out on Eisenhower Memorial Highway than on Frederick road.  He also notices that speeding tickets on these two roads are clustered together.  On Eisenhower, they seem to be around intersections and highway merges, and on Frederick, they seem to be in one spot near the bottom of the screen (probably a speed trap there!).  Mr. Smith feels much more confident with his new knowledge regarding which roads are high risk for speeders--and more importantly, where on which roads he needs to pump the brakes.

Ok, so though we've made Mr. Smith a more informed speeder, its not clear we've done anything good for the world.  However, consider Mr. Smith's friend, Mr. White.

Mr. White is Mr. Smith's college roommate.  Mr. White just got a new job and is moving to Montgomery County, Maryland.  He has kids who are nearing driving age, and he is concerned about driver safety in his neighborhood.  He wants to gather more information before deciding where to buy a house.  Mr. Smith shows Mr. White the new app he found. 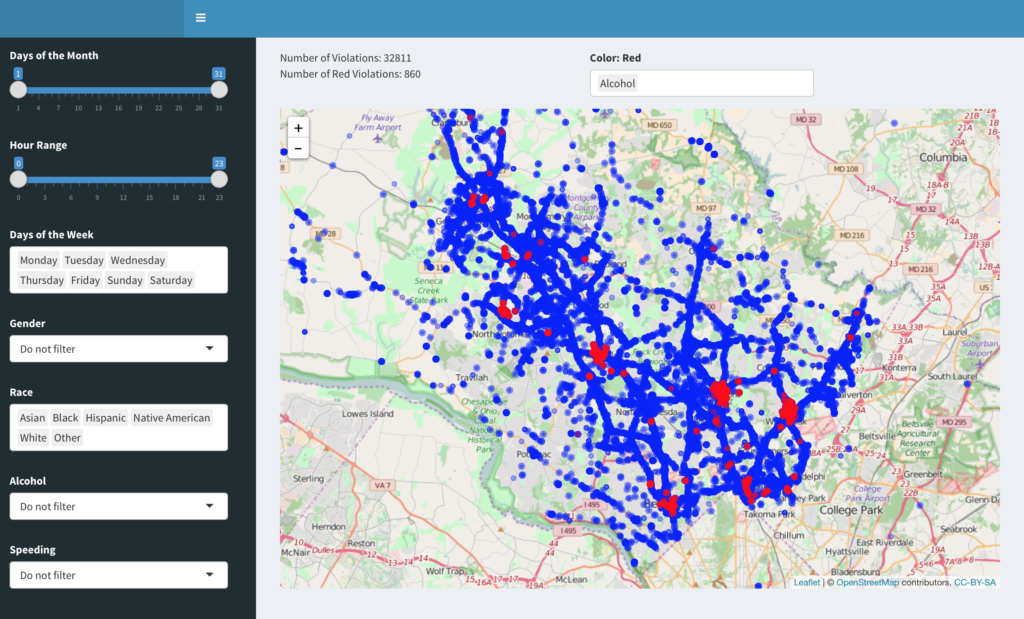 He is thankful to find that, though it might be hard to avoid violations in general, alcohol-related violations are clearly clustered around particular points--if he avoids those neighborhoods, he can likely reduce the amount of time his kids spend on the road with intoxicated drivers.

Mr. White wants to do better, however.  He knows that his kids are in school on weekdays and will do most of their driving on weekends.  He decides to look at the same distribution for Friday-Sunday.  He sees the same clusters just as pronounced and feels very confident that he knows where most of the drunk driving takes place in his future home. 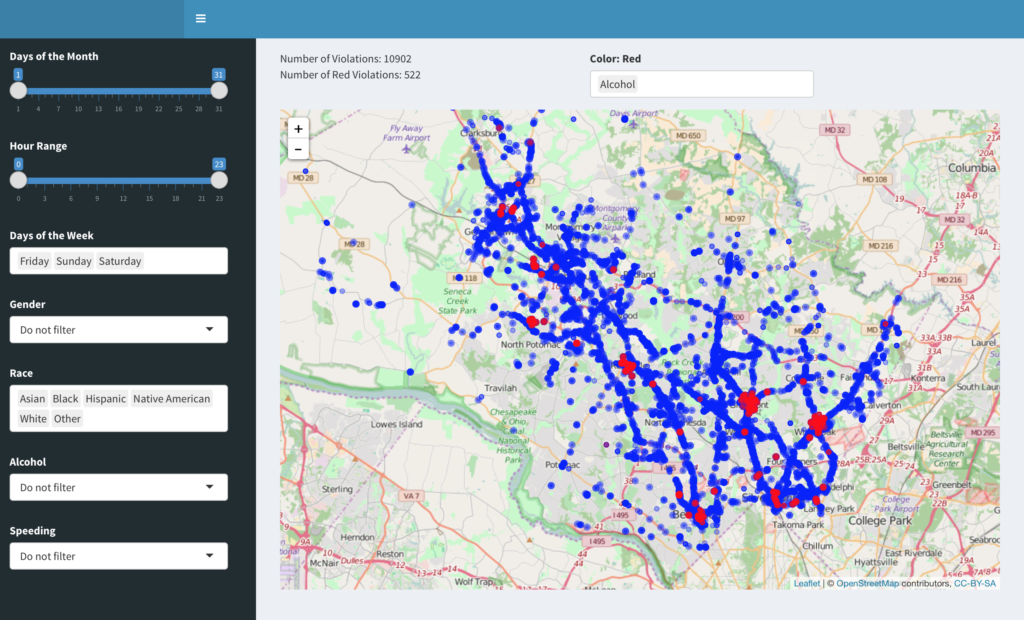 He also notices that the red violation count doesn't decrease as much as he expected when he cut out over half of the week.  He decides to compare his weekend visualization to the same for Monday-Thursday.

He notices that even though Monday-Thursday is a larger stretch by a day, Friday-Sunday has substantially more alcohol-related violations.  He becomes concerned that his children will be doing their driving when the most intoxicated drivers are on the road!  To figure out what to do about this, he decides to investigate further: exactly when on the weekends are the drunk drivers out and about? 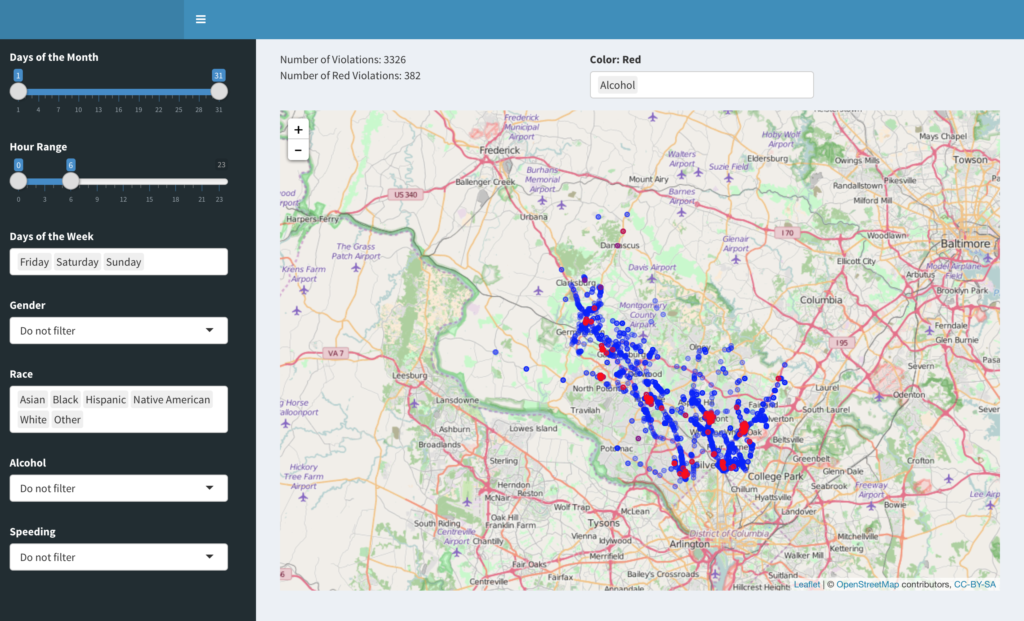 Hopefully it's clear how plotting traffic violations and allowing users to filter, color, and zoom can be informative about local areas, as well general time and area distributions.  Notably, alcohol-related violations did not follow the general distribution of traffic violations in the county but rather were concentrated around hot-spots.  Speeding violations, however, did: 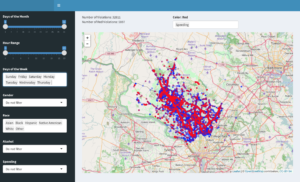 Speeding violations more closely resemble the layout of violations in general than do alcohol-related incidents.

Caroline Fernandes April 30, 2019
I liked the way you used these visualizations to explain regular activities.The story told by these graphs is quite interesting!