As an avid investor with a master’s in financial engineering, and more than seven years of front-office experience in the financial industry, I closely follow the financial news every single day to manage my own personal investments in stocks, fixed income, and commodities. I actively digest developments through Barron’s, Bloomberg, CNBC, the Federal Reserve, Reuters, and the Wall Street Journal. In this web-scraping project, we will focus on Reuters.

Reuters employs over 2,600 journalists in almost 200 locations around the world to deliver more than 2 million news stories annually. Topics covered included, but are not limited to, developments in the financial markets, business, geopolitics, technology, among others. Additionally, every single day, more than one billion people worldwide digest Reuters news in 16 different languages.

In this largely exploratory web-scraping project, we gathered, processed, visualized, and analyzed half a year’s worth of Reuters news articles (6,531 articles in total between July 2019 and Jan 2020), to address the following questions:

Visualization of Trends in the Data

For our first glance, we counted 54,000 unique words that appeared in these 6,531 articles. In this “word cloud”, larger words represent higher frequency of occurrence 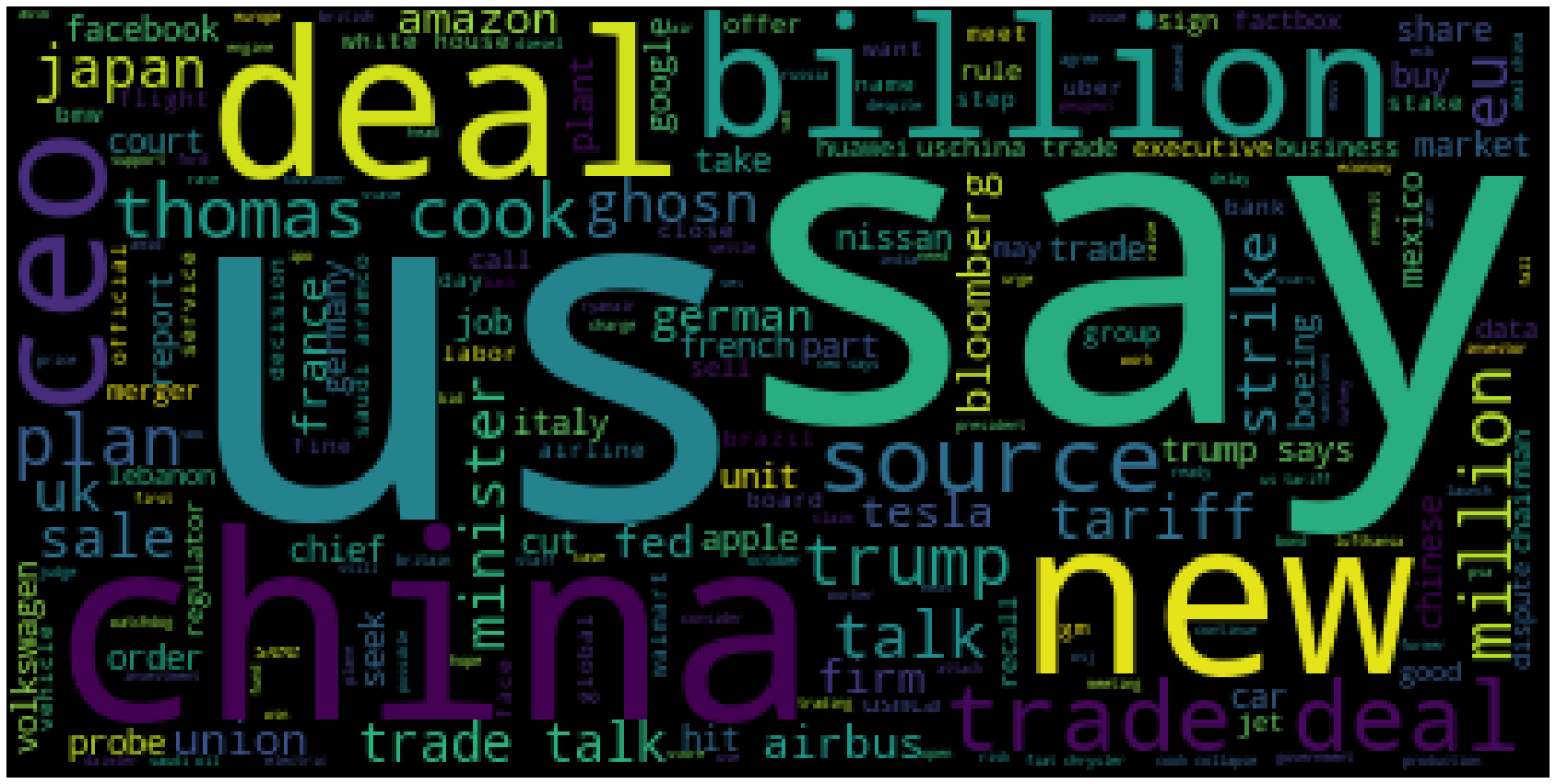 The 20 most common words and their number of appearances in these 6 months’ worth of articles are illustrated here: 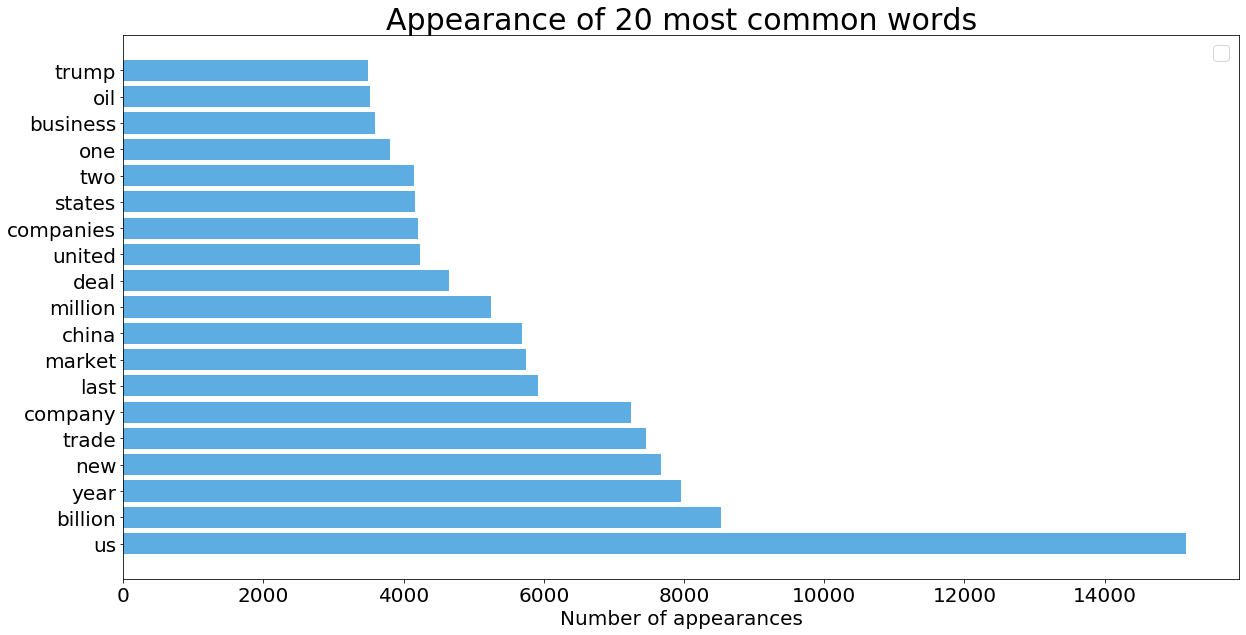 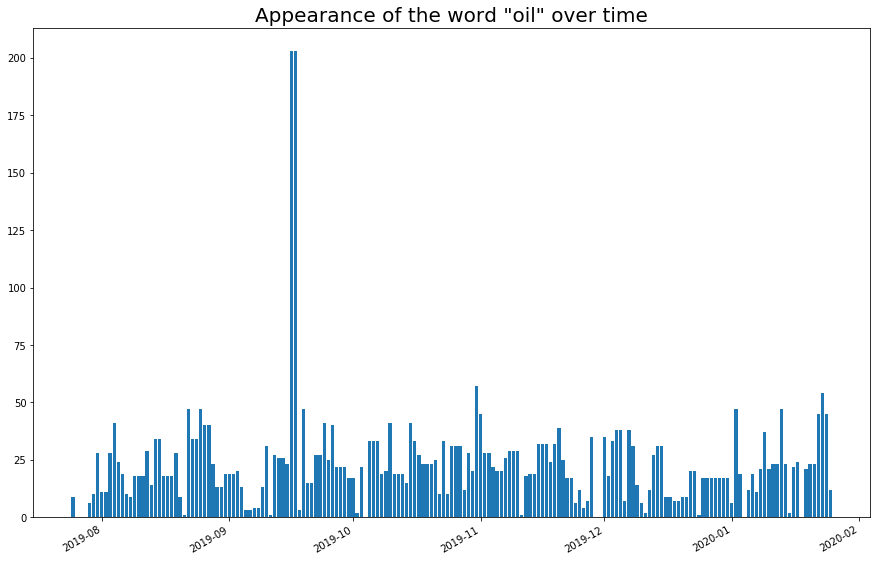 The 4x increase on Sep 17th, 2019 shows the impact of the drone strikes on Saudi Arabia’s oil refineries. 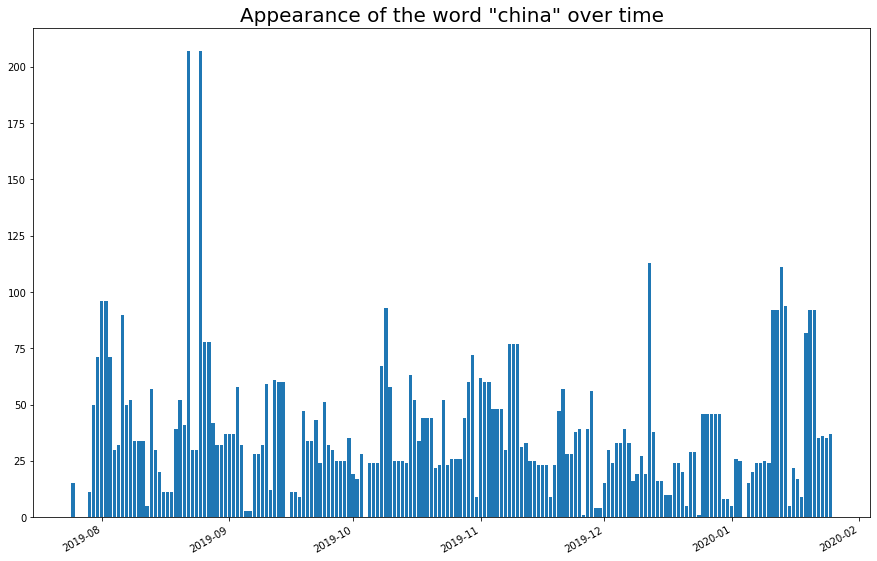 Similarly, the 2x increase on Aug 25th 2019 was when President Trump declared that he regrets not raising tariffs higher on China.  Subsequent spikes were related to progress in trade negotiations. 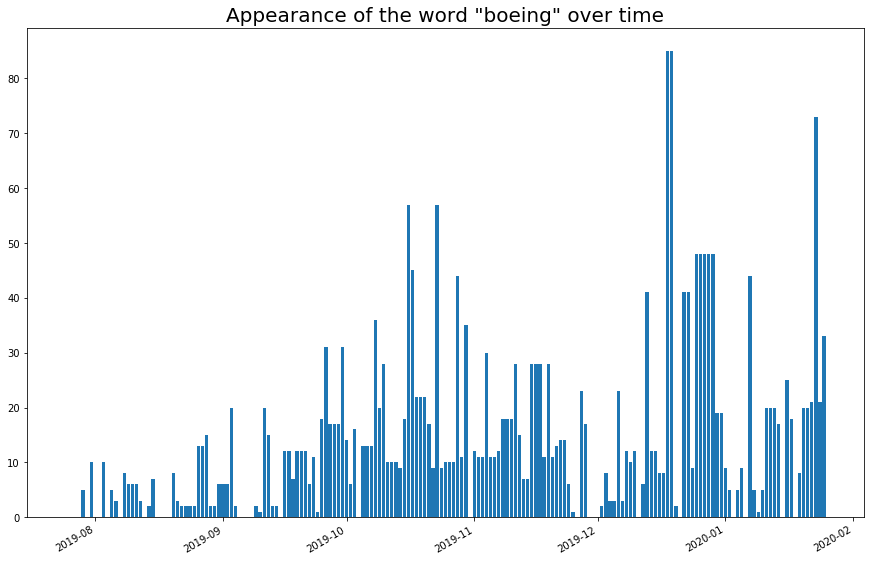 Trends in which topics were being discussed and how long certain topics stay hot can serve as useful guidelines to investors, business reporters, as well as business managers.  For instance, from this data, we already noticed that:

Can We Assign Better Labels to the Articles?

Some of these appeared redundant.  Yet, others appeared incomplete.

For example, we see labels for “Supreme Court” and “U.S. Legal News", which should be lumped together.  We also see labels for “Japan”, “Asia”, and “Hedge Funds – Asia.”  Additionally, there is a category specifically for foreign exchange, but none for stocks, fixed income, or commodities (even though we know that oil was a big topic during the past 6 months).  Can we improve on this?

We asked k-means clustering to find us 10 new classifications for these articles.  Here are the most common key words and some sample headlines from these 10 categories:

Overall, we can say that k-means actually did a fantastic job with classifying these articles into 10 categories, simply based on frequency of words, without any labels given.  Additionally, after the unlabeled clustering, we can observe some clear patterns:

This was a demonstration of how even basic data science techniques can save journalists time (from having to label articles) and readers time (from searching for articles in the wrong section).  The use of supervised learning techniques could add even more value in this area.

Python provides an easy-to-use and popular NLP library called "NLTK" that allows us to tokenize (split articles / sentences into words), remove stop words (remove non-essential words such as "the", "is", "in", etc), and evaluate sentiment (assign a number between -1 and 1, where -1 is very negative and +1 is very positive)

For instance, NLTK produces a sentiment of 0.34 for this short article:

Running through our half year's worth of data, we see that NLTK assigned:

One question that came to mind was: is the news article sentiment for that day correlated to the stock market return?  And if so, could we monetize it in some way?

The answer was (perhaps) predictable: 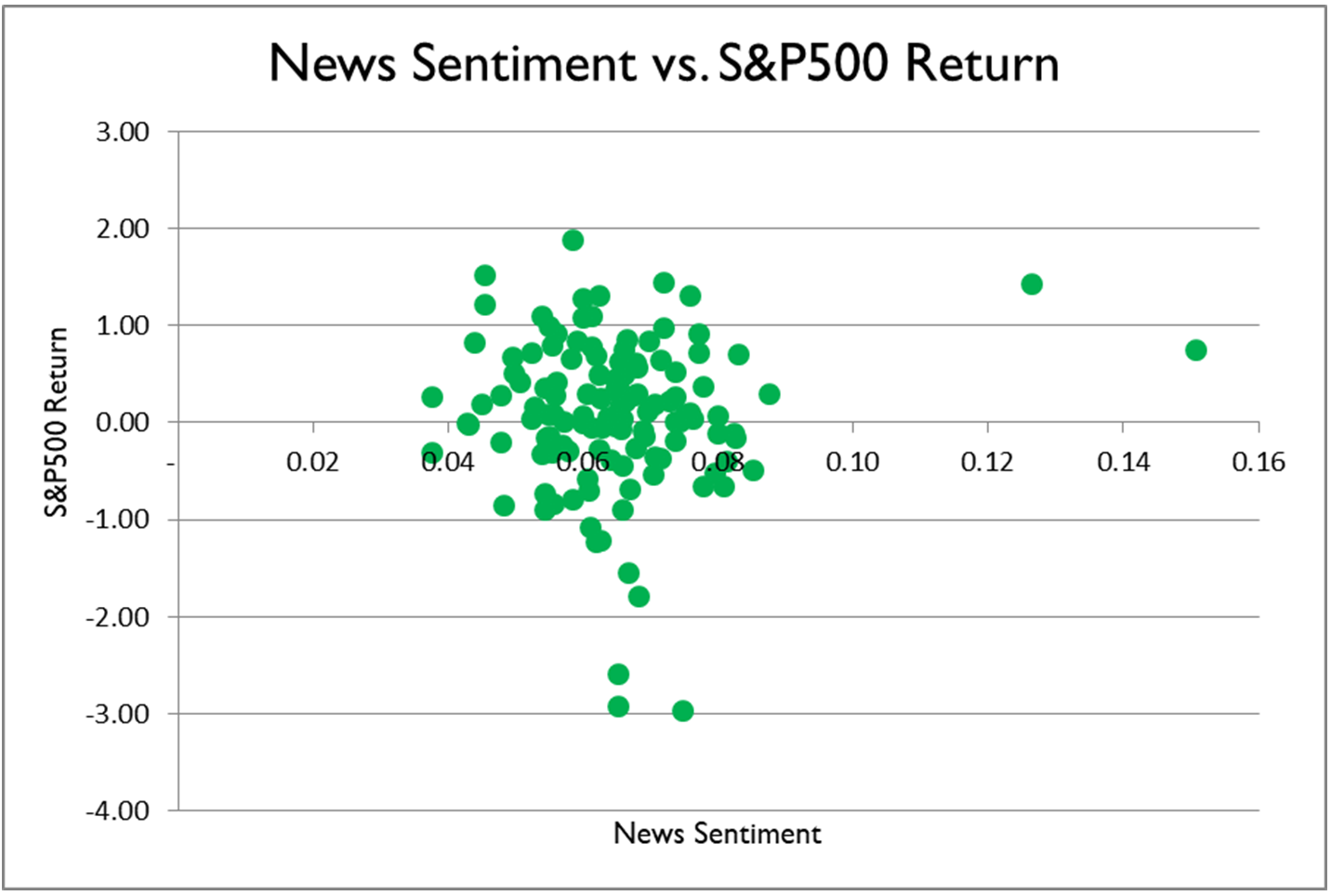 With a correlation of 0.02, there was no meaningful relationship between the return of the S&P500 for that day vs. the overall sentiment of news articles from Reuters.  Some very plausible explanations:

Regardless, NLP has much potential in many other areas.  It is already used in auto-complete / auto-corrections, for customer satisfaction, translation between two languages, spam filters, and chat bots.  In the arena of news articles, it is used to assess political bias, or to assess whether a news article is fake or real.  Already, we are seeing that there are already numerous areas where artificial intelligence is used to produce financial reports automatically (Narrative Science Inc), or alert reporters on developing stories before they become hot topics (such as Heliograf).

An optimistic viewpoint is that data science and machine learning will complement human reporters and financial analysts, freeing their time up to allocate towards tasks that are not easily automated, as opposed to taking jobs away from humans.

Tools used for this analysis