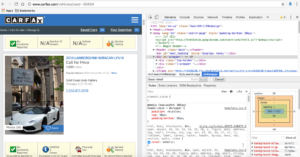 This projects focuses on the following goals:

To find out what are the most popular car makes/models/colors of the 10 cities.

To study relationship between price and mileage by city or car make.

The web scraping was conducted using the beautiful soup tool and the results were visualized using R-studio. The code can be found at: https://github.com/nycdatasci/bootcamp006_project/tree/master/Project3-WebScraping/BinFang 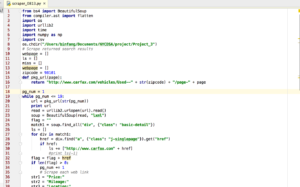 Price vs. Mileage and MPG city vs. MPG highway

When comparing overall price with mileage, it can be noted that the two parameters demonstrate a different distribution pattern by city or region.  A clear inconsistency of this two parameters is found in New York and Miami, where the price is much higher than mileage. Subsequently, the overall mileage is also relatively lower in these two cities. From the plot summarized by region, it is found that the price is higher and mileage is lower is norther cities than southern cities. Such inconsistencies can also be observed from the boxplot. Regarding to the comparison between MPG city and MPG highway, there is no obvious variability between the two parameters for different cities. 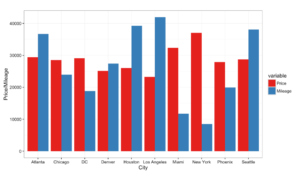 Regarding to the engine type, it seems 4-cylinder is most common for all the cities. It also can be noted that in some big cities, such as Chicago and New York, people like to drive 10 or 12 cylinder cars.

Correlation Analysis between Price and Mileage

Three cities, Atlanta, Los Angeles and New York were picked out to analyze the spatial distribution variance of the scatters between price and mileage. It can be summarized that the mileage level for different cities is quite similar, but New York has the lowest over price, followed by Atlanta and Los Angeles, which indicates that New York has the best price-performance ratio.

If plot the price-mileage relationship by car manufacturers, it can be concluded that when under similar mileage level, Japanese car is the cheapest, as opposed to the most expensive car from Germany. American car is at medium price.