Yelp Scraping for a Dish Recommender

For this project (github link) I set out to build an app that recommends what dish to order (and not order!) at restaurants in New York City.  I often find that I go to restaurants in the city that come highly recommended (e.g. based on word of mouth, Google, Zagat, or Yelp ratings) but don't know what to order once I'm there.  In these situations I often ask the waiter what to get, but wouldn't it be better to use the reviews themselves to decide what dish to get?

With that in mind I decided to scrape the Yelp reviews of all NYC restaurants serving Indian cuisine (I needed to start somewhere). 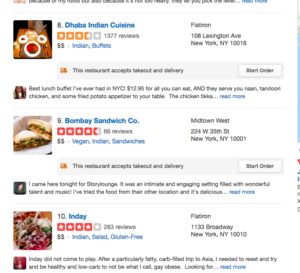 I used Python's Scrapy package to collect the data (github here).  This amounted to about 55,000 reviews.  Once I had this data I decided to focus on the restaurant Dhaba, a restaurant I've enjoyed before but struggle to order from as it has an extensive menu.

"Yelpers" left about 1,300 reviews for Dhaba and many of them discuss particular dishes.

From here there were many directions to go in and I tried to start down many of them to see how fruitful they would be.  The first "naive" model was created by using the yelper's ratings and assigning that number to each dish they mention.  While this was quick and easy to create, it has many problems and mostly ignores the most valuable aspect of the review, the text itself!

I decided to use the out-of-the-box sentiment analysis tool from Python's TextBlob package.  This assigns a score from -1 (negative sentiment) to +1 (positive sentiment) for any text input.  At first I assigned a score to each dish depending on the sentiment of the reviews that mentioned the dish.  However, this was not ideal as many reviews mention both good dishes and poor dishes from the night - why lump them together into one score?

The paradigm I settled on was to gather the couple sentences around each mention of each dish and calculate the sentiment of those short passages (weighting the center sentence more and the periphery sentences less).  This allowed one review to contribute different values for different dishes.  Returning to the example review above we can see the reviewer had both positive and negative things to say about the different dishes ordered.

Lastly, rather than calculating a simple average of these reviews I built a model (linear regression) which predicts sentiment given dishes to mitigate the effects of correlation of dishes and to take into account the confidence of the model (for example having the score depend on how many times it was reviewed).

I was very happy with how this project turned out. The machinery is now in place for me to create dish recommendations for any restaurant in a short time and no longer need to ask the waiter what to order (instead I'll use the power of the reviews!).

While the dish recommender is not ready to be deployed "in the real world" nor has it been tested, I plan on fixing the latter part as my friends and I are going to Dhaba soon to order the best (and worst!) dishes from the recommender.

Jake has a Ph. D. in Mathematics from The University of Maryland, College Park. Originally an algebraic topologist, Jake worked as a trader at Bridgewater Associates for two years after completing his degree. He is now a data...
View all posts by Jake Ralston >