The dataset could be found on Kaggle which reveals hospital readmission data From multiple hospitals for patients from 1998 to 2008. Some work had to be done before applying different predictive models. This included some data wrangling for missing chunks of data, developing heat maps to identify features with positive influence over readmission rates, and build revised datasets.

Logistic regression is a widely used statistical method for predicting binary outcomes, such as whether or not a patient will be readmitted to the hospital. In the context of predicting hospital readmission rates for patients with diabetes, logistic regression could be used to predict the probability of readmission based on a variety of factors, such as age, gender, past medical history, and medications.

Random forests are an extension of decision trees that build multiple decision trees and combine their predictions to make a final prediction. This can result in improved accuracy compared to a single decision tree. In the context of predicting hospital readmission rates for patients with diabetes, a random forest could be used to identify the most important factors that predict the likelihood of readmission and make a more accurate prediction compared to a single decision tree. Gradient boosting is a machine learning algorithm that works by creating a series of weak models and combining them to make a single strong model.

Some key takeaways are that patients are more likely to  be readmitted if they were inpatients for at least 1 full day. Age played a factor for age groups over 40. Patients that took more than 1 daily medication had higher readmission rates compared to those that don't. Random Forest had the highest accuracy when compared to other modeling techniques most likely from our data source not having multiple linear relationships from the available features. 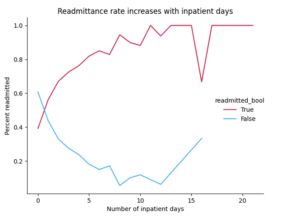 Overall, logistic regression, decision trees, random forest, and gradient boosting are all useful algorithms for predicting hospital readmission rates for patients with diabetes. Each of these algorithms has its own strengths and limitations, and the best approach will depend on the specific characteristics of the data and the goals of the analysis. Some future work in the project could include diagnosing admission types, BMI data on patients, and a different compilation of features used to train these algorithms.

Hey everyone, my name is Erjon Brucaj and I originally studied chemical engineer. I worked as an engineer for a few years before decided it wasn't the career path for me. I've always enjoyed developing solutions to problems...
View all posts by Erjon >