Data tells us if the Metaverse Really is the Future?

Ever since Facebook rebranded its company name to Meta, the popularity of the concept of Metaverse has increased dramatically. To explore the potential of this concept, I did a trend data analysis that focuses on Twitter mentions and related stock performances.

According to Oxford Languages, Metaverse is defined as "a virtual-reality space in which users can interact with a computer-generated environment and other users." The concept was first introduced by Tim Berners-Lee in 1989 when he described the information system "World Wide Web" (WWW). The term 'Metaverse' was first created in 1992 by Sci-Fi writer Neal Stephenson in his novel "Snow Crash." The term gained popularity since Facebook released its name-changing news and changed on 2021-10-28.

To find the actual trend of Metaverse, I took a three-step approach. I set my timeframe to begin in 2020-03-23, when the stock market started its recovery phase from the crash due to COVID-19, and end in 2021-12-27 when the combination of inflation and geopolitical tensions caused the stock market to plummet.. I applied Google Trend, which outputs visualizations to Google users about the search frequency of keywords over time, to that timeframe to gain insight into the overall popularity of Metaverse. Second, I used a dataset from Kaggle.com that tracks Twitter mentions of ‘Metaverse.’ From the dataset, I used NLP techniques to create a WordCloud to find the most mentioned words from the Metaverse-themed tweets, and sentiment analysis on the polarity, subjectivity of the tweets. Lastly, I used Python Yahoo Finance API to obtain stock information of the top 10 held positions of Roundhill Ball Metaverse ETF, the first and most popular ETF tracking Metaverse related stocks. Common data cleanings involve handling missing values (removing NaN rows or replacing NaN), type change (string to date), regular expressions, etc.

The Google Trend graph below, with x-axis equaling time and y-axis equaling search interest index (the higher, the more frequently searched, thus more interest), shows a clear spike of Metaverse trend starting late October of 2021 when Facebook rebranded its name to Meta and introduced its plans to invest heavily into Metaverse.

By looking at the search interest map, we can see that the most interests come from regions where big tech companies are located, mainly Atlanta, Austin, and coastal cities.

The popular search topics and queries center on cryptocurrency and metaverse stocks, as well as anything related to Facebook. That’s the main reason I decided to analyze the performance of Metaverse-related stocks.

Surprisingly, the Google Search interest map of Metaverse by country shows China has the most interest, and the USA only ranks at 13. China’s ban on using Google seems not to quench its citizens’ pursuit of the Metaverse.

The dataset I found on Kaggle.com collects Twitter tweets that have mentioned Metaverse. Since it only covers 2021-11-25 to 2021-11-27, I focused on the words mentioned during this period instead of a trend over time. I focused on the 'text' column and 'hashtags' column and linked them together. I also converted all the string characters to lowercase and took out information that is not helpful for content analysis, such as URLs, double spaces, punctuation, words that don’t contribute to meaning (e.g. 'the,' 'a,' 'of'). Using the WordCloud package from Python, I generated the following WordCloud plot that shows the most mentioned words from all tweets contained in the dataset. 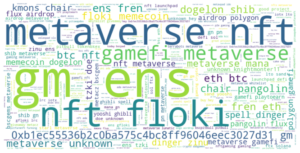 The most mentioned words are "nft," "gm," "ens," "btc," "gamefi," related to cryptocurrency and blockchain. Such a trend indicates the Metaverse concept is still at a very early stage, and fans haven’t changed tone from the 2020 crypto frenzy.

To better understand users’ attitudes towards Metaverse, I used Python textblob and nltk library to tokenize, stem, and lemmatize the words in the ‘text’ column, and filtered out all the texts posted by users whose number of followers is greater than 50,000. Eventually, I used the sentiment function to generate the following two scatterplots.

From yfinance API, I extracted the adjusted closing stock price of the top 10 Roundhill ETF holdings to see a general performance over the 2020-03-23 to 2021-12-27 period. Roundhill is the first Metaverse ETF that invests in companies that have already declared investment decisions and are highly related to the concept.

Among them are ‘Nvidia (NVDA),’ ‘Roblox (RBLX),’ ‘Microsoft (MSFT),’ ‘Meta Platforms (FB),’ ‘Unity Software (U),’ ‘Apple (AAPL),’ ‘Autodesk (ADSK),’ ‘Qualcomm (QCOM),’ ‘Tencent Holdings (TCEHY)’ as of the date I looked up the holdings of Roundhill. I excluded ‘Amazon’ to include the 11th holding ‘Taiwan Semiconductor Manufacturing Co. Ltd. (TSM)’ Because Amazon’s price base was way beyond the others, which may cause false trend impressions.

The chart above shows that all the top holdings have had an uptick trend until around December of 2021– with the exception of TCEHY and TSM. The result is expected because in December 2021 the Federal Reserve announced that it was planning to increase the interest rate to cool down the inflated Economy of the US. Since TSM is based in Taiwan, the ripple impact of the interest increase on its stock performance seemed relatively minor. TCEHY, a Chinese technology company listed as ADR in the US market, has been underwater due to the tech companies’ crackdown by the Chinese government.

To better understand the trend of the stocks, I calculated the 25-day and 100-day rolling moving average of the Metaverse stock group and took the mean of the group’s prices by day. The chart below shows that the 25-day SMA (‘Simple Moving Average’) line was above the 100-day SMA most of the time in our timespan, indicating a solid uptick trend of the Metaverse stock group in general.

To enhance the findings from above, I included primary index ETFs: QQQ-Nasdaq 100 ETF; SPY-SP 500 ETF; DIA-Dow Jones Industrial ETF; IWM-Russell 2000 ETF. To calculate the percentage of days when the 25-day SMA of a stock is above the 100-day SMA, I set the starting date to 2021-03-10, which is more than 100 days after our initial starting date 2020-03-23, for the sake of calculating a moving average and is the most recent IPO date among the top 10 stocks.

I used 2021-03-10 as a benchmark date even as the most recent IPO stock-Roblox won’t have any price information before this date. It won’t affect the ratio since the days without any information won’t be included in our ratio calculation.

Last but not least, I used the TA-lib Python wrapper to calculate the Relative Strength Index (RSI) of the stocks, including the indexes. I set the period to 14 and converted the RSI number to a percentage as a standard in the financial industry.

The plot above all the stocks, including the significant indexes, had normal distributions of RSI around 0.4, with some having minor skews. Since 0.4 is between the benchmark range of 0.3 and 0.7, the interest in these stocks is pretty standard.

We can tell the perception toward the Metaverse concept is relatively positive as most interest circles around gaming, cryptocurrency, blockchain technologies, and the supernova NFT. As we are still in a very early stage of this concept, it has the potential to develop significantly. On the other side, there are some concerns about this idea, such as a possible bubble burst from the trading of NFT that’s popular in the Metaverse world.

Data Scientist and active CPA passionate about using data science to explore business-driven insights. Graduated with a Bachelor's degree with Mathematics major and Economics & Management major, as well as a Master of Science in Accountancy, Chance is...
View all posts by Chance Xu >