As humans, we are profoundly social creatures; we long for meaningful connection with other individuals. Social connectedness positively affects our mental and physical health, while feelings of loneliness are associated with a decline in quality of life. In this project, I suggest that a sense of social connection is allied with an additional substantial benefit: increased productivity. To investigate this hypothesis, I employed Exploratory Data Analysis (EDA) techniques using Python to draw meaningful patterns and insights on the relationship between social connectedness and productivity. Exploring the under-researched link between the two variables may bring great value to both employers and employees who seek to improve performance.

The dataset contains 15,977 survey responses with 24 attributes describing how we live our lives, including attributes that reflect on both our social connectedness and productivity levels. The dataset was obtained from Kaggle and can be accessed HERE. The original survey can be viewed at www.Authentic-Happiness.com.

My data preparation process included the creation of several new variables to best reflect the notions of interest, using the available data. To further enrich my analysis, I generated two versions for each new variable: categorical and continuous.

The dependent variable of my analysis, productivity, contains two variables obtained from the row data: 'TODO_COMPLETED' and 'FLOW'. 'TODO_COMPLETED' represents how well responders complete their weekly to-do lists on a typical week. 'FLOW' reflects the number of hours participants experience 'flow' in a typical week. According to the survey, 'flow' is defined as the mental state, in which you are fully emersed in performing an activity.

The independent variable, social connection, includes two variables obtained from the row data: 'SOCIAL_NETWORK' and 'CORE_CIRCLE'. 'SOCIAL_NETWORK' estimates of the number of people the responder interacts with on a typical day, while 'CORE_CIRCLE' represents the number of people who have a close relationship with the participant. The created variable, social connection, serves as a proxy of social connectedness, which is often defined as the feeling that you belong to a group and generally feel close to other people.

Interestingly, both social connection and productivity fluctuate by age and gender. As can be viewed in Figure 1, on average, women are more productive than men for all age groups. Overall, both gender groups witness an increase in productivity over the years. 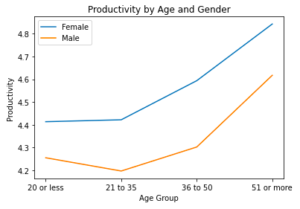 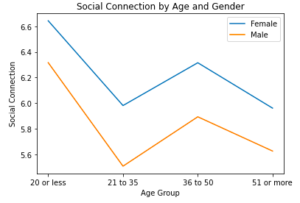 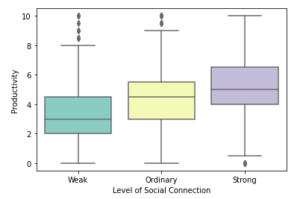 Figure 4: Productivity by Gender and Levels of Social Connection 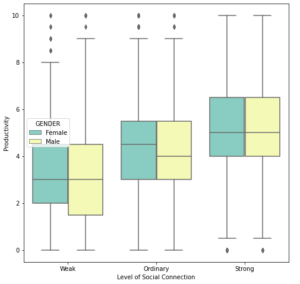 Figure 5: Productivity by Age and Levels of Social Connection 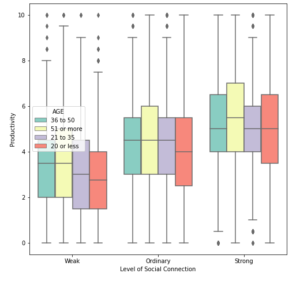 Self-Report Bias - People are frequently biased when they report on their own life experiences. Thus, survey-based data introduces the risk of self-report bias.
Sampling Bias – The data collection process, online survey responses, may potentially lead to sampling bias. In other words, certain groups of the overall population have a lower or higher sampling probability than others.
Correlation != Causation - The correlation between productivity and social connection does not automatically mean that the change in one variable is the cause of the change in the values of the other variable. Further research is required in order to establish causation.

Data Science Professional with experience in research alongside program management. I am passionate about developing data-driven solutions using statistical methodologies and programming languages including Python and R.
View all posts by Ayelet Hillel >