Data on Trends in U.S. Border Crossing Entry since 1996

Since the 2016 election, online data shows inland U.S. Border security has been a major subject of debate. The construction of the new border wall has started, and the tension between Mexico and U.S. has intensified along with it. Many people predicted not only a decrease in number of illegal border entry but also a decrease in number of legal border entry which could hurt tourism and discourage the trade across the borders.

Currently at the end of 2019, three years after the 2016 election campaign, what can we learn from the statistics of inland U.S. Border entry? Did the political agenda affect the way people enter our country? I would like to answer these questions through visualizing the findings.

I used the dataset from Kaggle.com . This data is originally collected by U.S. Customs and Border Protection (CBP) every quarter. It then gets cleaned, assessed and maintained by the Bureau of Transportation Statistics (BTS). It contains the statistics for inbound crossings at the U.S.-Canada and the U.S.-Mexico border at the port level for every month from the beginning of 1996.

It is important to be aware that this dataset doesn't count the number of unique vehicles, passengers or pedestrians but rather the number of crossings. For example, the same truck can go back and forth across the border many times a day and data for each time will be collected. Also this data doesn't include the nationality of the passengers or pedestrians or their reason for crossing the border.

I used R package dplyr to clean the data. Criteria for Border Name was shortened as Canada and Mexico from U.S-Canada Border and U.S.-Mexico Border, and the Location column was divided into two sections: Longitude and Latitude. Also data from this year was excluded from the analysis as the data is not complete yet and that will not provide a good insight for this project. The exploratory data analysis (EDA) was done mostly using R package ggplot2 and leaflet. I used the ShinyDashboard to show the visualization and shinyapps.io as a server to present the findings.

First I wanted to observe the location of border ports and their distribution across the U.S. to see the big picture. 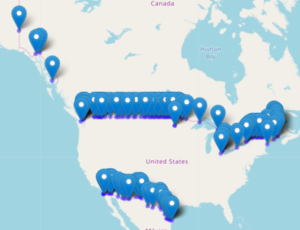 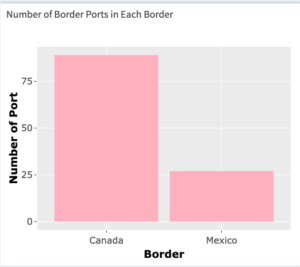 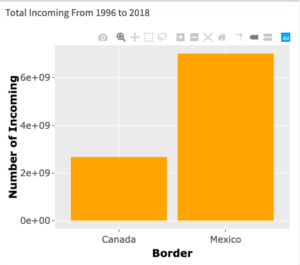 Now moving on, I wanted to find out the methods of border entry and how it looks different between Canada border and Mexico border. 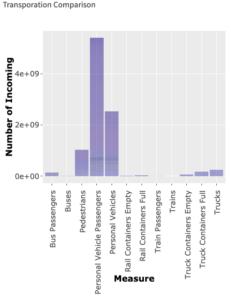 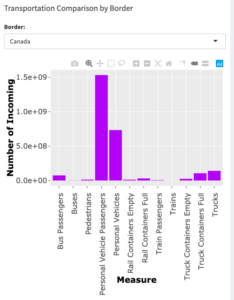 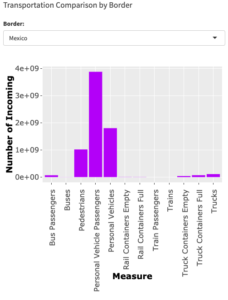 When the measure was compared between two borders, I could see a difference where the Mexico Border has a significant number of pedestrians whereas the Canada Border does not. 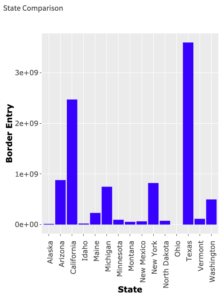 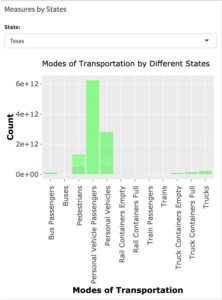 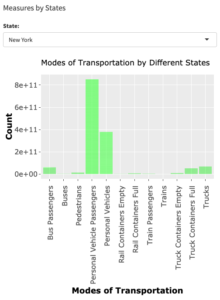 Most of the southern states had a similar trend of entry transportation as Texas, as is shown on the left graph above: mostly containing the Personal Vehicle and Pedestrians.  For the northern states, it looked similar to the New York, as is shown on the right graph above. This indicates that the northern and southern borders differ a lot in terms of number of people walking into our country. 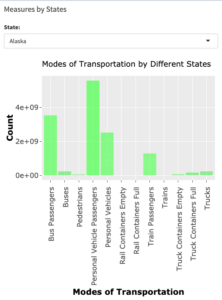 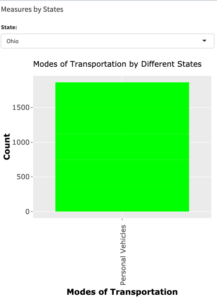 Two exceptions to the statement were Alaska and Ohio. Alaska had more significant number of Bus Passengers and Train Passengers suggesting that most of the people coming into the U.S. from the Alaska border ports are travelers. Ohio, the state with the lowest number of border entry, was reported with only one method of transportation: Personal Vehicles. 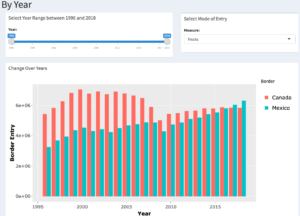 Change in Number of Trucks Entering

When I looked into the change in number of truck entering the U.S. at Canada and Mexico Borders, I saw some patterns. First, both the Canadian and Mexican sides had a sudden drop of number, as occurred in the year 2009. That was the year of global financial crisis. Trucks can be used for in-land trades and it is obvious from the graph above that the economy has a big impact on the border entry. Second, I was able to see the increase in the number of trucks entering at the Mexican border, possibly suggesting a better state of trade between the U.S. and Mexico. 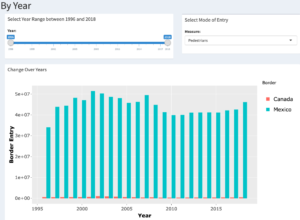 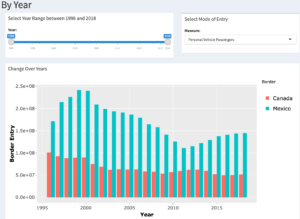 As I wanted to see the impact of the 2016 election to the local , I looked at the number of Pedestrians and Personal Vehicle Passengers over the years. Though it might have been expected that building the border wall would discourage the number of legal border entry in U.S.-Mexico border, the statistics show the increase in border entry. 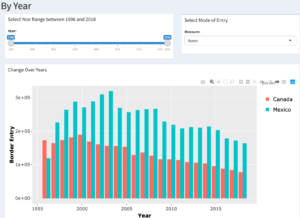 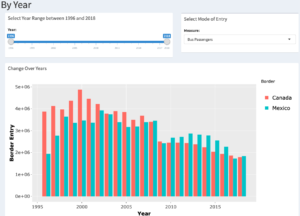 The number of incoming buses and bus passengers into the U.S. seem to be decreasing on both Canada and Mexico sides. Usually buses transport tourists, but as other methods of traveling such as flight and train have advanced over the years, use of bus as a method for traveling seems to have declined. 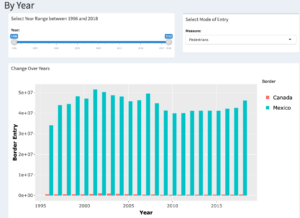 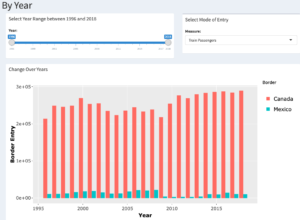 Two methods of transportation used for border entry that look distinctly different were Pedestrian and Train Passengers. As seen in previous graphs, most of the pedestrians are coming into the U.S. from Mexico because it is easier to walk across the border in the southern side of the States. A train is used more often to enter from Canada, and the number of its use has been increasing. This increase in the use of trains can be related to the decreasing use of buses. 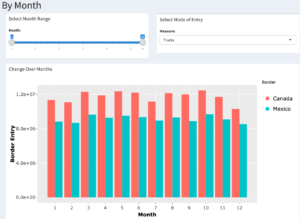 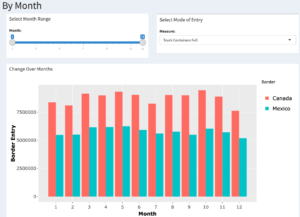 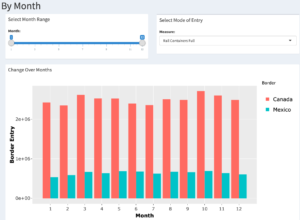 The data shows that there is no distinction in transportation methods used for trade such as Truck, Truck Container Full, Rail Container Full observable according to the month of the year. These seem to have a steady number of incoming from both Mexico and Canada borders, no matter what month it is. This indicates that the business related border entry stays steady in all-year-around. 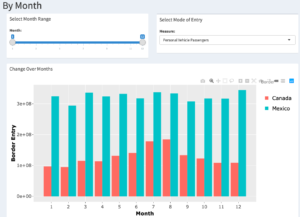 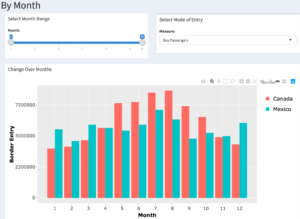 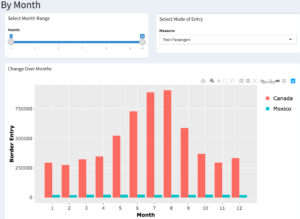 However this changes when it comes to the transportation related to traveling such as Personal Vehicle Passengers, Bus Passengers and Train Passengers. Number of border entry in US-Canada increases significantly in summer months, while number of border entry in US-Mexico stays around same all-year-around. As the northern border get a harsh cold winter, it makes sense more people would opt to travel in the summer months.

From the visualization and statistics, the number of border entry depends on the economy and business rather on the political climate. However this dataset itself can't explain the reason behind the change in number of border entry as there are still many factors that need to be considered. For further research, I would like to obtain the data regarding the citizenship of people that enter the U.S. borders as well as their intention or the reason for the entry. This can further support how the economy or tourism affect the trend in the border entry.

Thank you for reading my findings in U.S. Border Crossing Entry data. If you are interested in looking at the dataset I used, my ShinyApps, and the code, you can follow the links below.

mksorb.com August 28, 2020
mksorb.com [...]just beneath, are various absolutely not related web-sites to ours, having said that, they're surely worth going over[...]

Trends in U.S. Border Crossing Entry since 1996 – Technology Revolution October 22, 2019
[…] October 22, 2019 By Donald Greer [This article was first published on R – NYC Data Science Academy Blog, and kindly contributed to R-bloggers]. (You can report issue about the content on this page […]