The use of cosmetics is growing worldwide. Nowadays, men use cosmetics almost as much as women. Also, cosmetics usage among babies and children has also increased. However, the wide range of products and the complexity of their ingredients raises the concerns of regarding the health effects.. Data visualization based on The California Safe Cosmetics Program can give consumers a quick comparison while making purchasing decision.

Which Category is Being Reported the Most?

The first thing for consumers to consider is which category of  products they should be more cautious about while making a purchase. This analysis provides an overview of the products reported in each category. Non-permanent Makeup has the highest count compared to other categories, and Baby has the lowest count relatively. 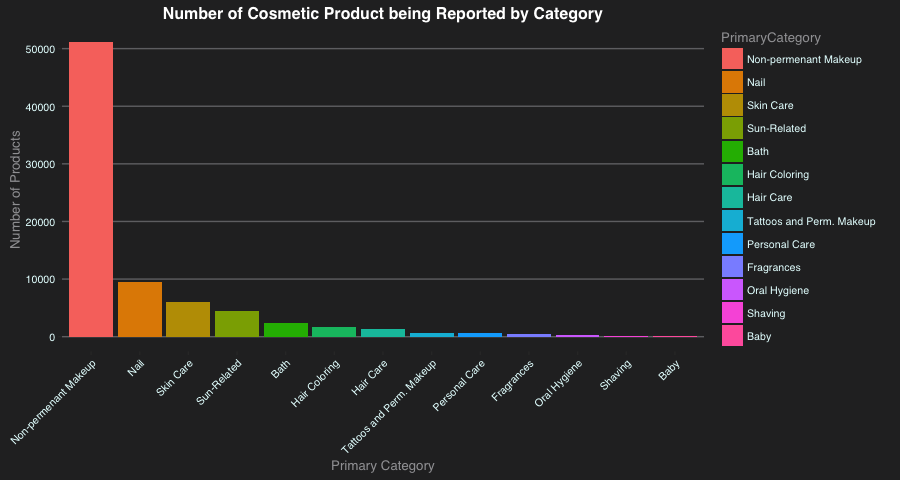 What Kind of Make-up?

After understanding that Non-Permanent Makeup has the highest number of products being reported, the question becomes which of these products is  reported the most.

After digging into the sub-category, the analysis shows that Lipsticks/Pencils, Eye Shadow, and Foundations/ Bases are the top three sub-categories. 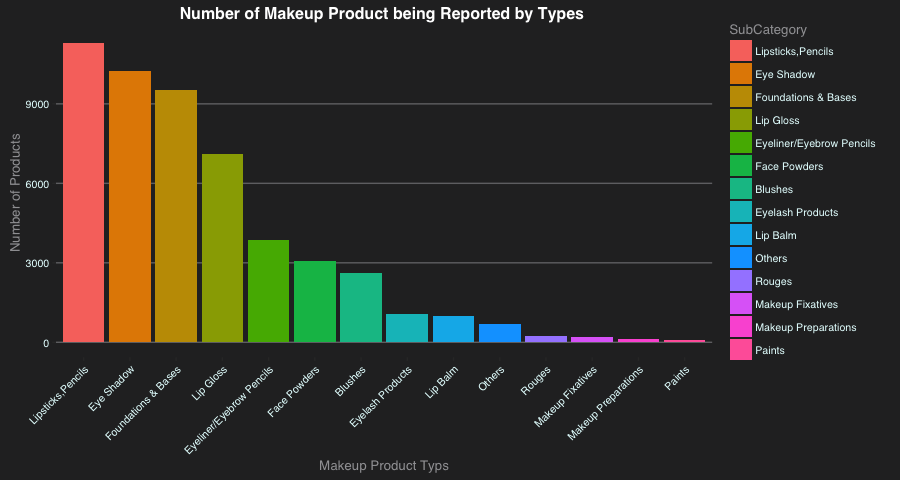 Chemical Count in Each Category

*Some records contain zero chemical count due to updating report for chemical removal. 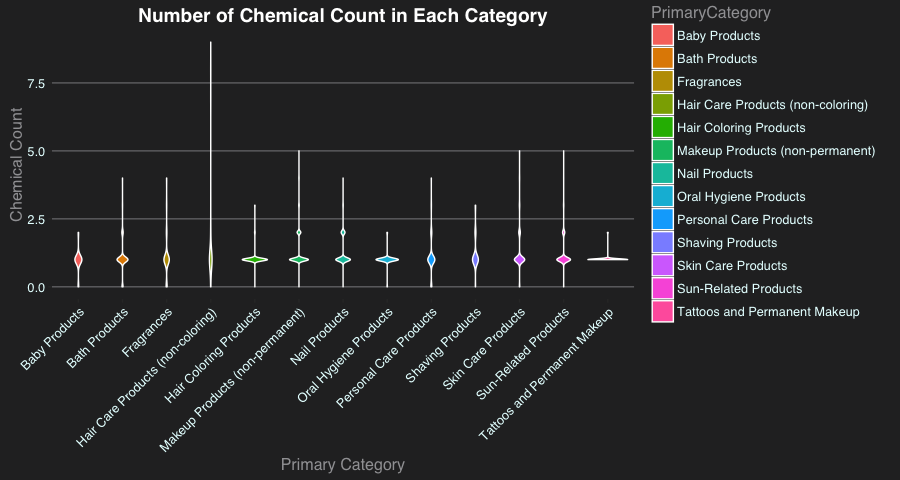 In order to have a better understanding while purchasing cosmetics, this analysis gives the top three chemicals that are used the most within each category.  With the exception of Personal Care Products, Titanium Dioxide is the chemical that is  used the most for every category.

Titanium Dioxide has the stability and ability to protect skin from UV light, and its resistance to discoloration. However, Titanium dioxide dust, when inhaled, has been classified by the International Agency for Research on Cancer (IARC) as an IARC Group 2B carcinogen, meaning it is possibly carcinogenic to humans. 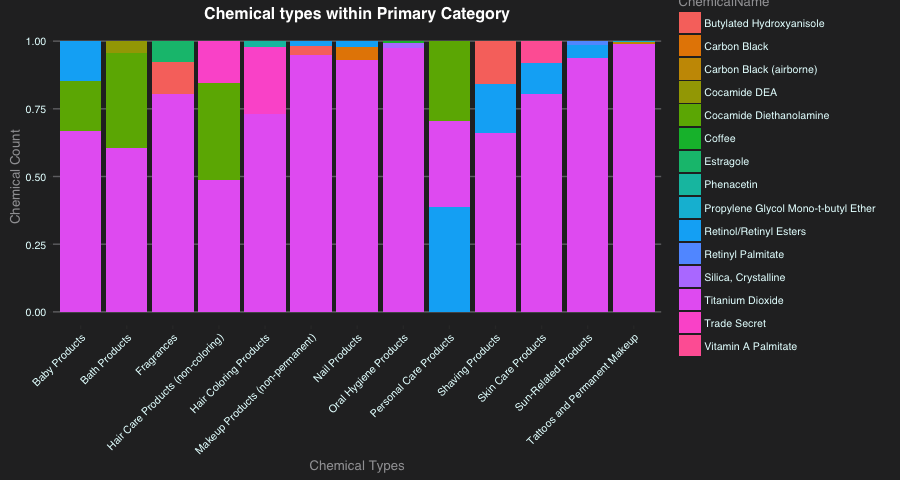 Which Company and Brand is Being Reported the Most?

The analysis below indicates  that L’Oreal USA and Coty are the top two companies with the  highest number of products being reported. The next three are:  Procter & Gamble, Bare Escentuals Beauty, Inc., and NYX Los Angeles, Inc. 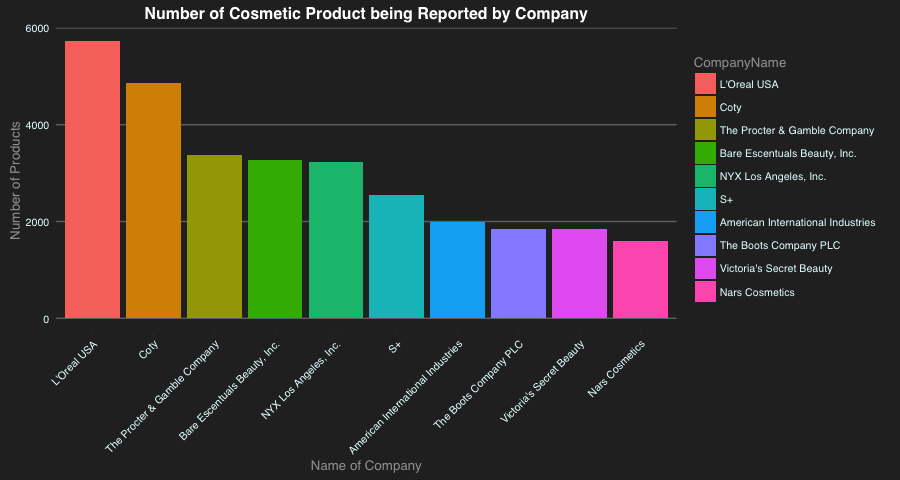 Looking at the top company, L’Oreal USA, let’s discover which brand under L’Oreal has highest number of products being reported. The word cloud shows that L’Oreal is the top one, and following are Lancome and Maybelline. Then YSL and Giorgio Armani. 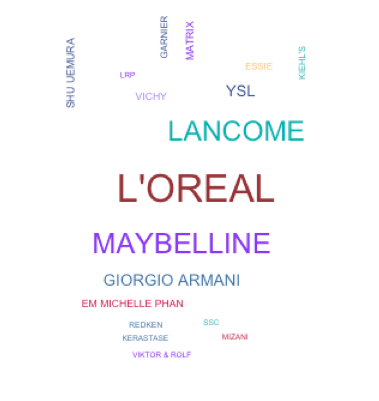 Even though it seems like a lot of well-known brands have products containing reportable chemicals, some companies have been taking actions after being reported. From the Timeline of Reported Cosmetics Analysis from 2009 to 2016, it would appear that 2010 was the year with the  highest ratio of products first being reported. In the same year, about half of the reported products’ chemicals were removed.

However, in 2011, about 2/3 of the products were reported again. Overall, the number of products reported went down after 2011.  Despite a slight increase again in 2014, in general it would appear as if the California law is working to make cosmetics safer.  There is a clear trend showing a decrease in reportable chemicals over time. 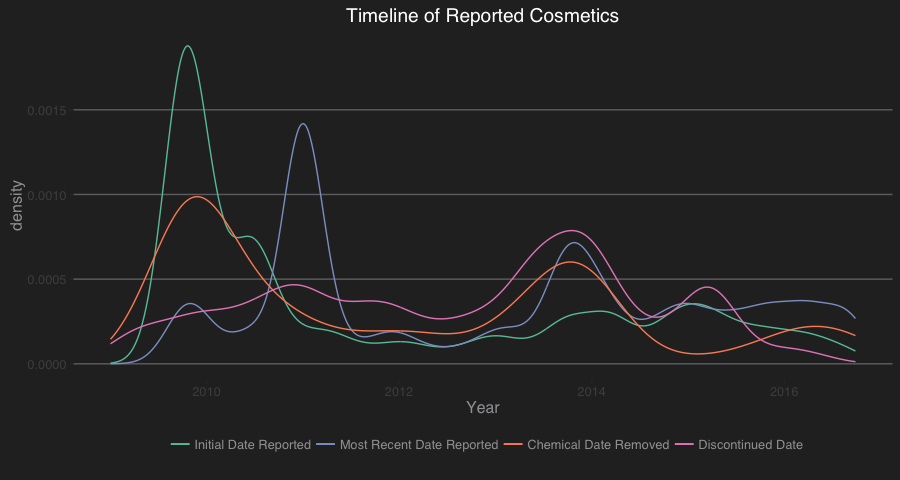 As for how companies dealt with the challenge of having reportable chemicals in their products, it looks as though there were initial efforts to remove the chemicals, but subsequent to this, products tended to be discontinued rather than altered.  This might due to the difficulty of the removal process or the product life-cycle.