A Data Analysis of Movies by Ratings

Contributed by Thomas Boulenger. He is currently in the NYC Data Science Academy 12 week full time Data Science Bootcamp program taking place between January 11th to April 1st, 2016. This post is based on his first class project - R visualization (due on the 2th week of the program).

Based on data, the film industry is now more than a century old, and has seen many technical changes over the years, adapting itself to its evolving audience's mentality, but also contributing to that evolution. Using movies ratings, by which we mean both target audiences and public reviews, we have a glimpse into the change process.

Thanks to Google Docs, it is relatively easy to obtain readable data from online resources such as the websites BoxOfficeMojo and The-Numbers. These have an interesting list of the movies currently in the top 200 in terms of best-selling tickets for US audience, where profits are available both unadjusted and adjusted to the US inflation.

In addition to such lists, we can use the R library omdbapi, a package in R that allows the user to sift through the IMDB database in order to add about 20 more variables for each movie (Actors, Directors, Genres, Runtime, Ratings etc..). This process was applied to both the Top 200 best-selling list, as well as for another large collection of around 5,000 movies which was scrapped from The-Numbers that contained our Top 200 list. In the sequel we use both these enlarged datasets and compare them to each other for our rating analysis.

Of course with joining datasets from different sources come some issues, and we therefore need some cleaning work to get rid of special characters, and tweak variables attributes.

Using Data to Analyze The Evolution of Ratings

we all know the number of movies released every year has increased a great deal since the beginning of the 20th century. However, within the Top 200 best-selling dataset, plotting the number of movies released each year and identifying their rating categories, we see an even larger increase in the number of general audiences movies (G, PG, PG-13). We also see appearing R-rated movies somewhere in the 1970s, a somewhat larger strip during the 1980s, and a reduced but constant one all the way through the 1990s and 2000s. 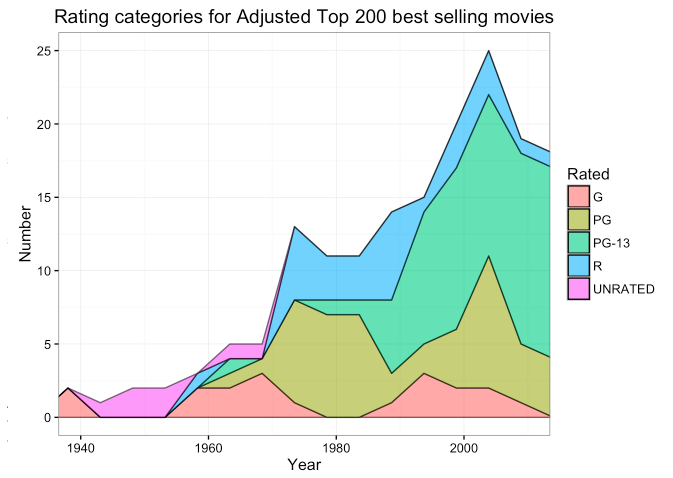 Notice here we look only at 5 different types of Ratings that seem most meaningful for the US film industry. Now comparing the Top 200 best-selling dataset to the large collection dataset, the situation looks a little different 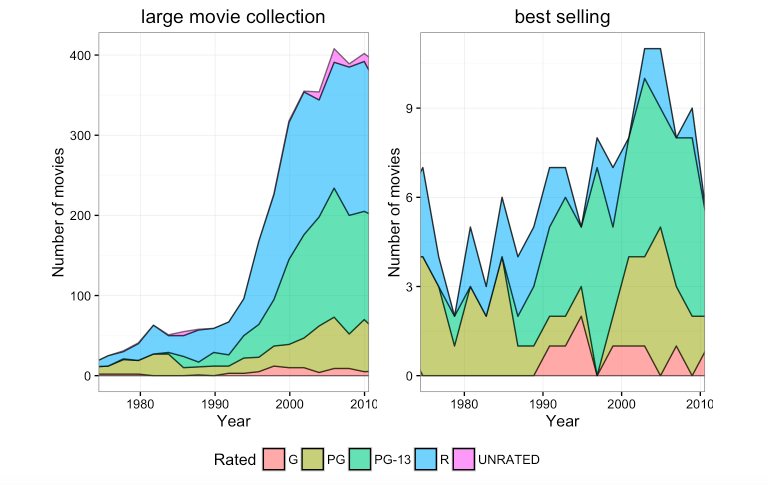 Although the biggest increase in PG-13 movies is confirmed, we see a seemingly larger increase in the number of R rated movies shortly before the year 2000. This suggests that the conlusion of an augmentation of general audiences and PG-13 movies was correct, but that R rated movies tend to be at least as common, though probably less financially successful.

Using Data to Analyze Adjusted vs Unadjusted US profits

We focus again on the Top 200 best-selling list to visualize the evolution of unadjusted and adjusted US profits over time. 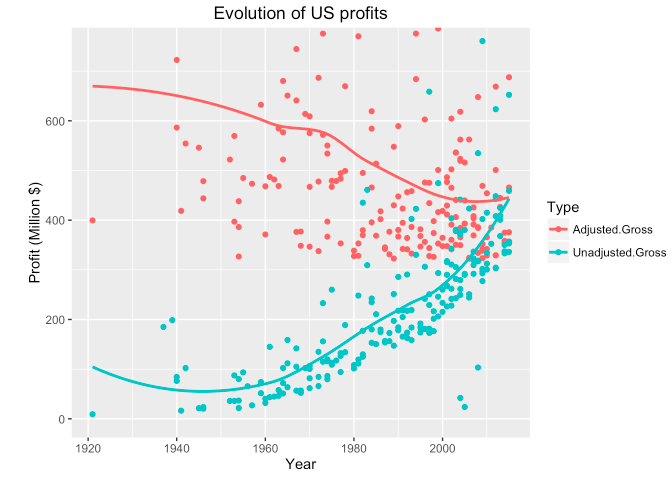 The unadjusted variable looks almost quadratic, when the adjusted one appear almost linear.

Although the period 1920-1940 seems unreliable as there is hardly any point to get an idea of the trend back then, the period 1940-1960 has a little more points and both curves seem to follow a relatively similar downward path. Of course with so little information, at this point this is only a guess that would need to be further investigated. But after the 1960s, something seems to be happening, as the unadjusted profits skyrocket when the adjusted ones follow their downward trend. Could this be interpreted as a sign of the acceleration of the US inflation?

The decrease in adjusted profits hints at a decrease in movies attendance in the US. Based on the unadjusted US profits and the averaged evolution of tickets prices in US dollars, we may infer the number of tickets sold and draw that number alongside the profits. 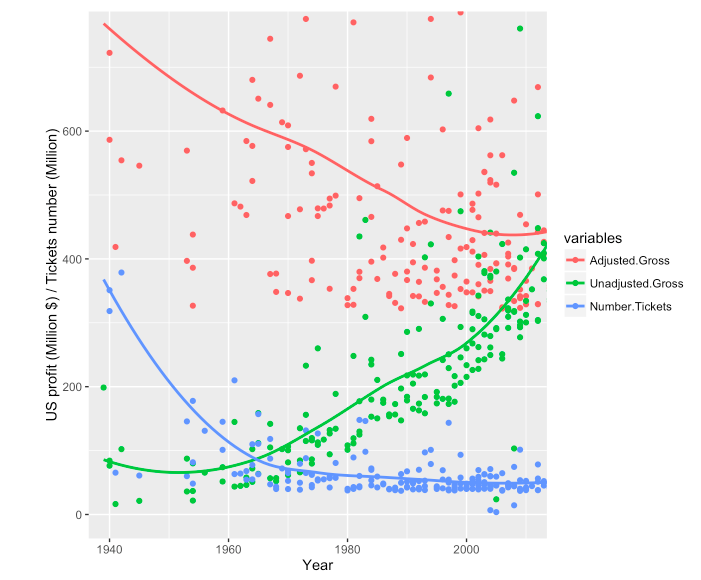 This new information about tickets prices seem to confirm the acceleration of the inflation in the 1960s. This affects the average number of tickets sold in the US per year. Of course this is a wild approximation, but we see a small downward trend again, even though the population in the US was increasing at the same time. This might be telling us something about the US market.

Using Data to Analyze US vs Worldwide profits

To see whether the US and foreign markets are different, we now use a worldwide Top 100 best-selling list of profits (per se unadjusted) to visualize in which part of the world are profits made 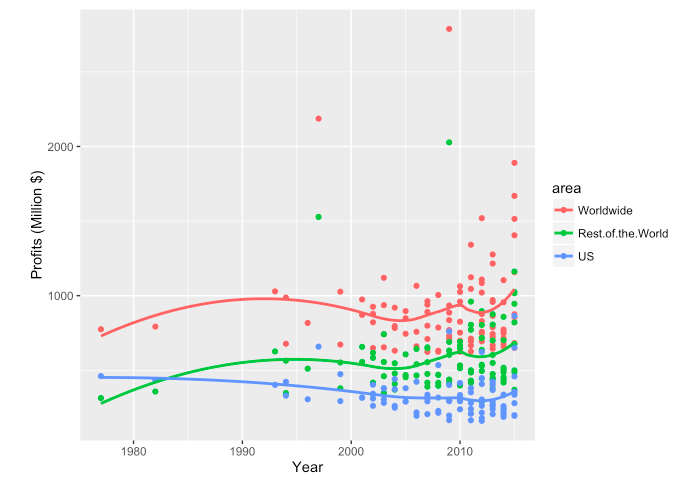 It turns out that once again for the reduced Top 100 list, we see a sligtly downward trend for the US market while the profits are mostly supported by sales outside of the US, most likely Europe and Asia. Could this be a reason behind increasingly many blockbuster movies setting the scene in Europe and Asia to appeal to foreign audience who will identify with such places? Could this be a reason why we see increasingly many foreign actors playing in hollywood movies?

Let us now add another variable to the problem: viewers ratings. Here we rely on IMDB reviews, which of course might be skewed and only representative of IMDB users. We retain only reviews for which the number of votes reaches at least 1% of the maximum number of votes within the dataset. All reviews are thus averaged on at least 15,000 votes. By doing so, note our Top 200 best-selling list becomes a Top 177. 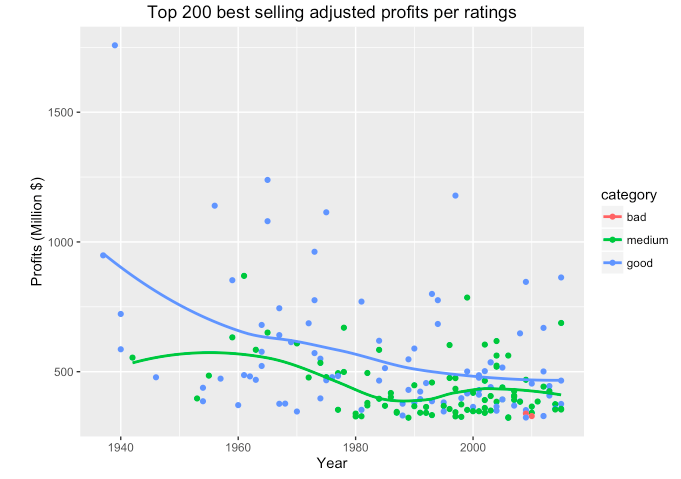 Here is how we organized the reviews by categories:

Speaking in term of adjusted US profits, it appears that the revenues of 'good' movies tend to decrease faster than the revenues of 'medium' ones. This is a little surprising, but again this might reflect a flaw in our dataset. This could also reveal a deeper trend in movie goers habits who don't go as often as they used to in the past. 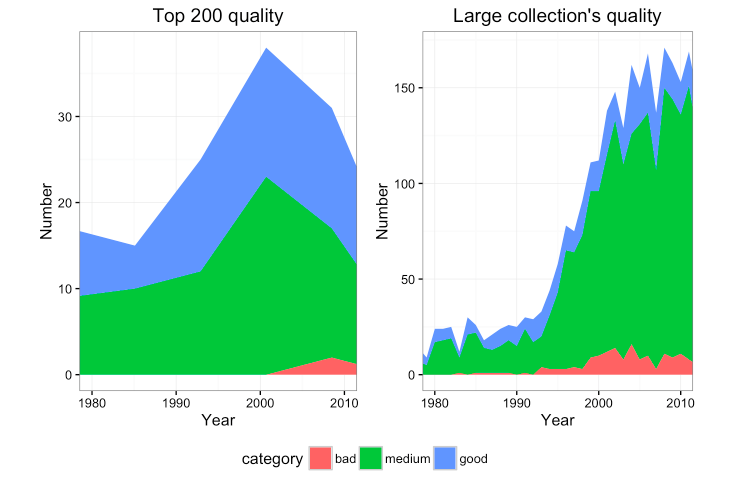 This might provide an explanation as to why people tend to go less often to the movies, as the public's perception might be that on average the number of good movies per year tends to decrease drastically in comparison to the total number of movies released. Does this reflect only IMDB users opinion or a larger public is again a question that our dataset is unable to address.

Using Data to Analyze Worldwide and US profits vs IMDB votes

How well are good vs medium or bad movies received? To visualize the question in terms of area, we split the profits (in unadjusted money) made either in the US or outside of the US. Of course it is fait to assume more money is made outside of the US, but we rescale the plots so they remain comparable 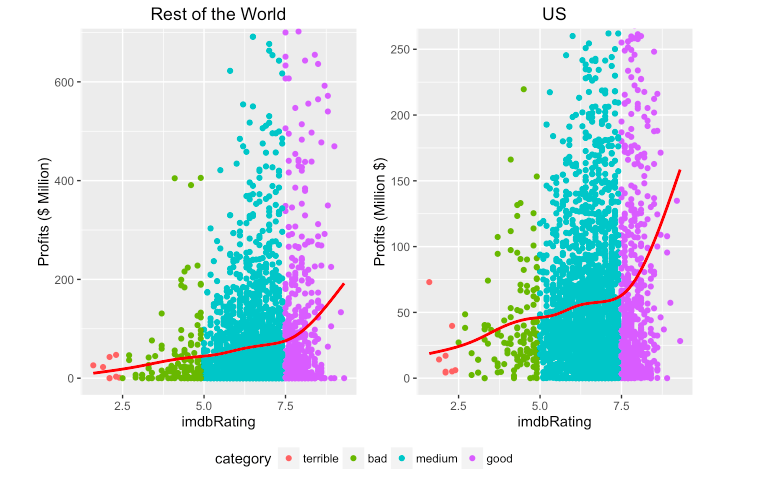 While the general situation is clear: the better the movie, the more money it makes, this assertion appears even more so true in the US where the upward slope in profits for good movies is much steeper than in the rest of the world. One is therefore tempted to draw the conclusion that US audiences give more importance to movies quality than the population outside of the US. Of course this conclusion is an average encompassing many different countries and culture across Europe and Asia, and thus bring along a lot of approximations.

Target audiences have widened, number of tickets in the US tend to decrease, although the accelerated inflation artificially inflates the profits as time goes on. Most of the movies profits are now made by the public outside of the US, and might be shifting the industry's habits. The proportion of medium movies tend to increase, overflooding the good ones, and might distort the public's opinion about the average quality in the film indutry. But in spite of all this, people favour good movies that still make significantly more money than medium and bad movies.

These are the overall conclusion we may draw from our dataset. As we already mentioned many times, this is to be taken with a grain of salt, as many information might be lacking while some of the variables we used might be skewed, such as the IMDB review, depending on wehther IMDB users reflect the overall population.

Thomas holds a PhD in pure Mathematics from Paris, and started to pick up an interest for Machine Learning while still a Postdoc at Basel University. After spending a few years in academia, he decided to join NYC...
View all posts by Thomas Boulenger >

Google March 24, 2020
Google Very few web sites that transpire to become comprehensive beneath, from our point of view are undoubtedly properly really worth checking out.

Google January 11, 2020
Google Please visit the web sites we stick to, which includes this one, because it represents our picks from the web.

hair color October 1, 2017
This is my first time visit at here and i am truly impressed to read all at single place.