An Analysis of NYC311 Noise Complaints

Launched in 2003, NYC311 is an information hub created by the New York City government that provides information on and access to over 3600 non-emergency government services. Originally designed to filter non-emergency calls away from the emergency phone line, 911, NYC311 receives service requests and complaints 24 hours a day, seven days a week, 365 days a year via phone, email, and text in over 175 languages. Service requests can range from inquiries regarding trash collection, voting locations, businesses licensure, and even parking tickets, and complaints can include a wide range of issues including, apartment heating and cooling, street and sidewalk conditions, noisy neighbors and surroundings, and many more.

Since 2010, NYC Open Data has made all NYC311 service requests and complaints publicly available. Here I analyze a subset of these data, those filed under "noise complaints," to provide insights into possible avenues by which NYC311 might improve upon its mission to "provide the public with quick, easy access to all New York City government services and information..."

See my GitHub for access to the code for this project.

These analyses can be used to improve NYC311 services by identifying deficiencies in available information for certain complaints, allowing for predictions regarding the times of day or year when complaints surge, and pinpointing which complaint types and boroughs have relatively poorer complaint resolution times. 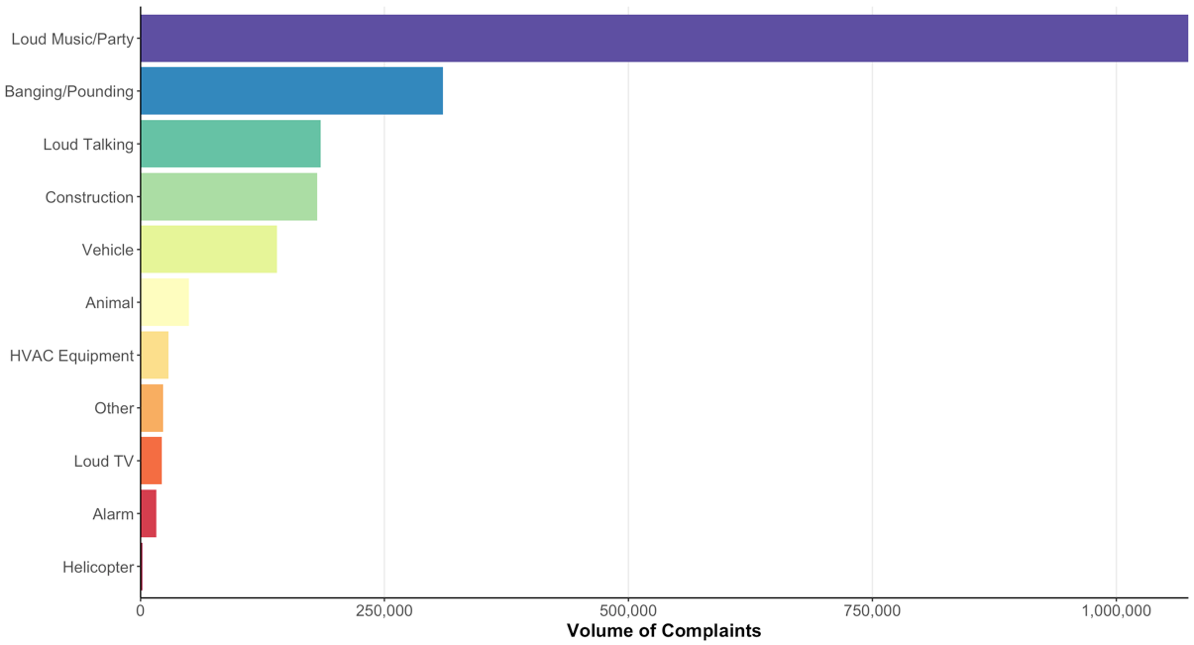 Visualizing all complaints through the years shows that the total number of complaints filed have increased each year. This trend is also seen within each borough except between the years of 2010 and 2011 where some boroughs showed a slight decrease followed by a large increase in 2012. See my Shiny app* to toggle by year and borough. 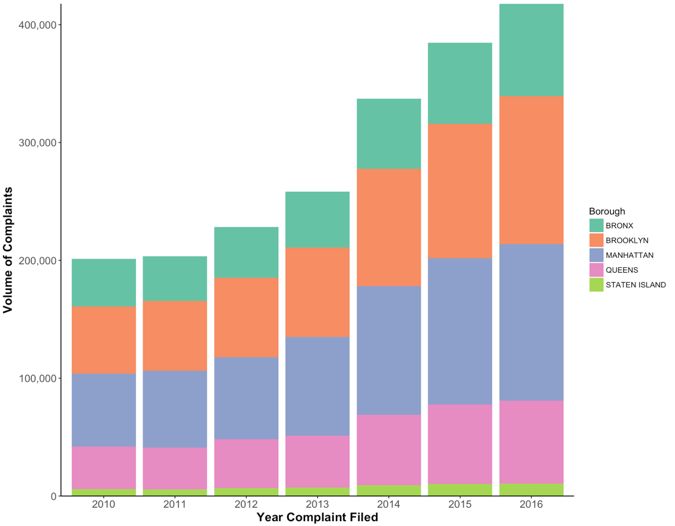 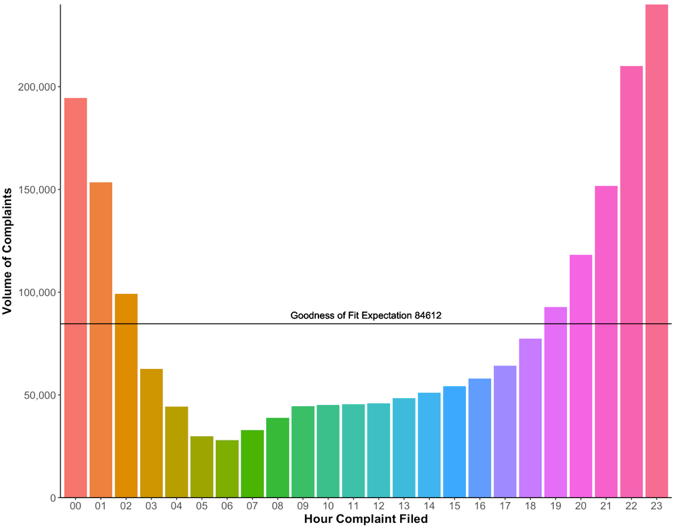 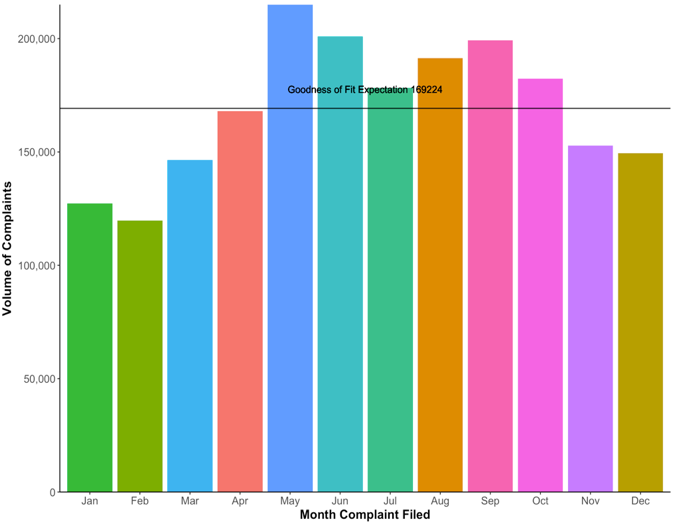 Overall, when including all complaint types and years in the analysis, the highest frequency of complaints occurred in Manhattan, and this trend is also true within each year. While Manhattan has the third largest population of the five boroughs at ~ 1.6 million (Queens and Brooklyn are ~ 2.3 and ~ 2.6 million, respectively), its population density is by far the highest at nearly 71,500 people per square mile. This figure is almost twice the population density of the next most densely populated borough, Brooklyn, at nearly 37,600 people per square mile. This marked difference in population density likely explains the high volume of complaints found in Manhattan. This trend, however, is not the same for each complaint type. For example, Queens and Brooklyn have more Alarm complaints than Manhattan. See my Shiny app* to toggle, complaint type, year, and borough. 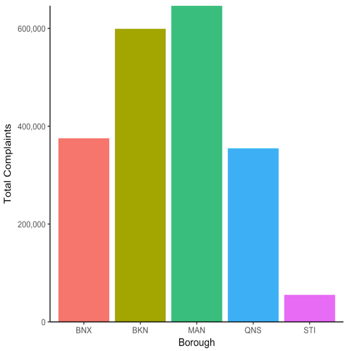 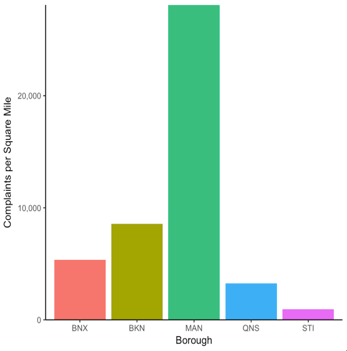 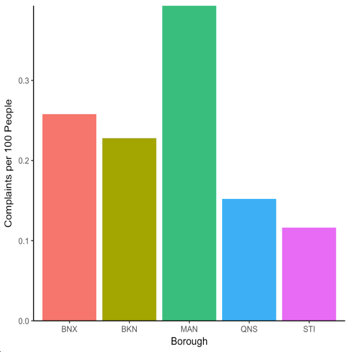 An analysis of variance (ANOVA) of the total data set suggests that the boroughs do differ significantly in the rate at which complaints are resolved. Including all complaint types and all years, Manhattan has the highest (i.e., slowest) log mean complaint time resolution, despite having the lowest median (F4, 2014390 = 2445, P < 0.001). Letters differences above boroughs correspond to statistical differences at P < 0.001, while shared letters signify no difference. 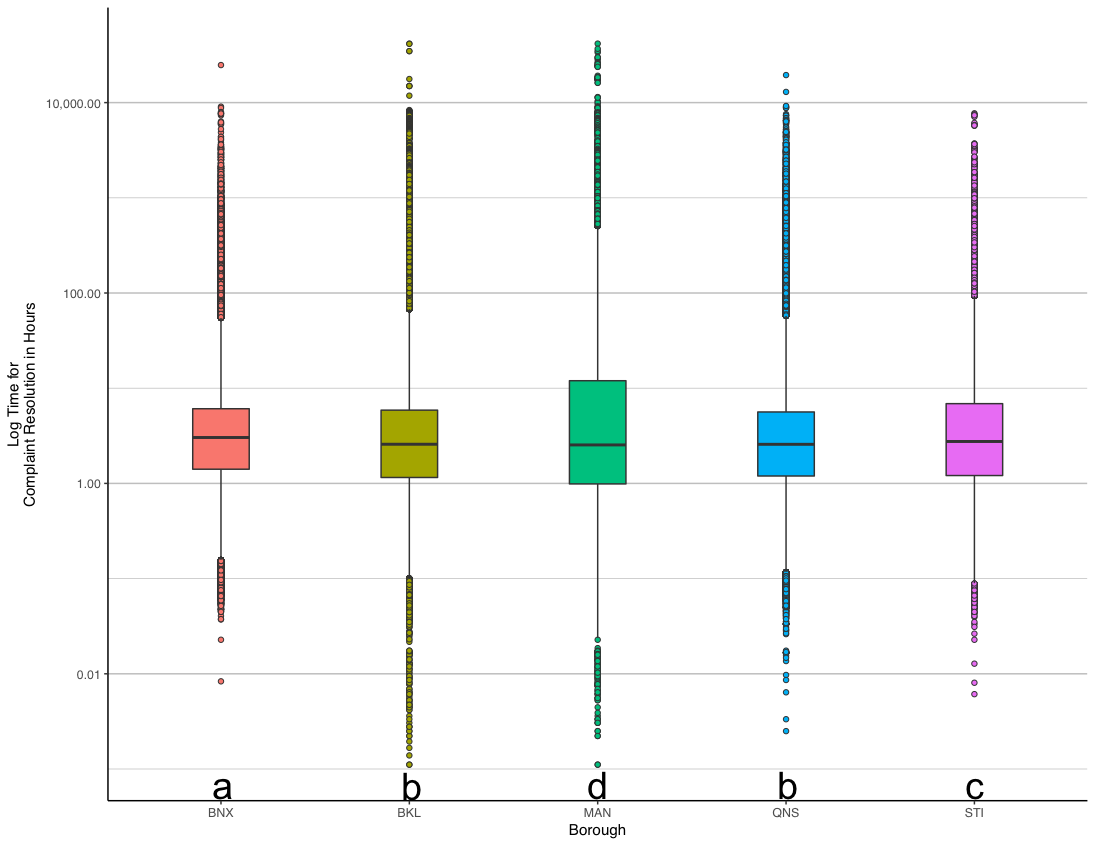 Similarly, different complaint types differ significantly in their resolution times (F10, 2014384 = 265193, P < 0.001) through all years and boroughs. Letter differences correspond to statistically significant differences at P < 0.001. Luckily for NYC residents, complaints related to noisy neighbors (i.e., Banging/Pounding, Loud Music/Party, Loud Talking, and Loud TV) are resolved the fastest of all types, and this trend is seen through all years and boroughs. See my Shiny app* to toggle between these variables. 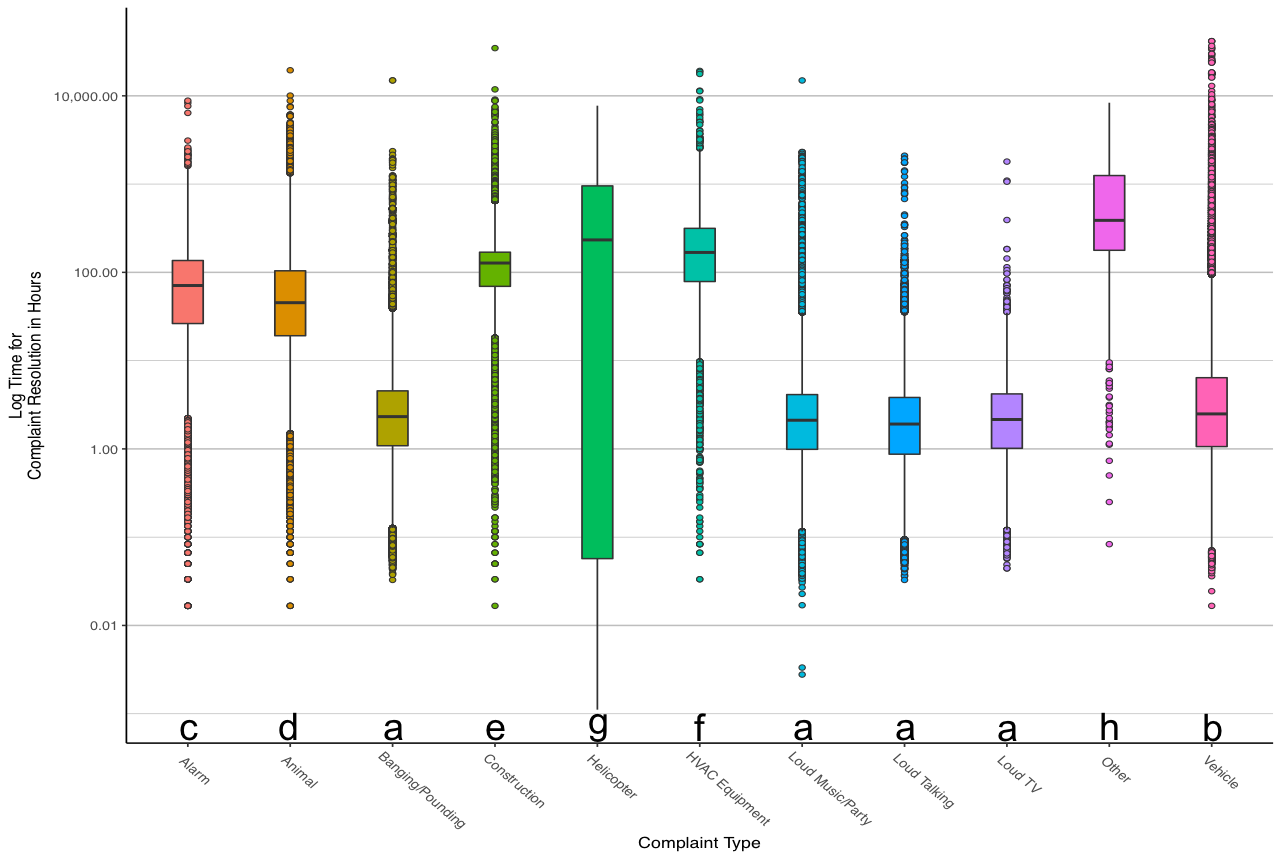 The results of these visualizations and analyses reveal important insights into the volume and distribution of noise complaints filed with NYC311. The identification of these trends provides several routes by which NYC311 can build and improve upon their goal of providing the public with fast and easy access to the many governmental services available. Specifically, NYC311 can now:

The short amount of time allotted for research on this project limited the scope of the analyses. Future investigations of these data will benefit from incorporating demographic and socioeconomic data of the complaint areas, refining the analyses to specific neighborhoods rather than just boroughs, and finally by parsing through the myriad resolution types provided by NYC311 that described how each complaint was resolved.

For more information and many more visualizations of the data, including an animated heat map of complaints through the months and years, see my Shiny app, and visit my GitHub repository. Below is a look at the homepage of the full Shiny app*.

*Note, Shiny's free subscription does not support large data files, so the data set displayed in the app is reduced by 75%. 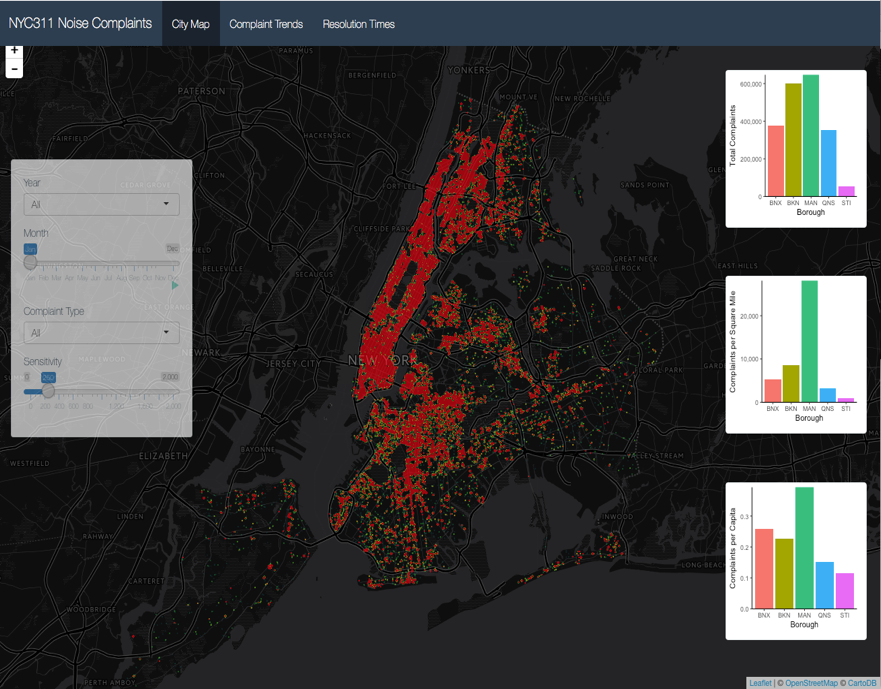 Aaron received his Ph.D. in evolutionary biology from the City University of New York. For his research, he designed and conducted field experiments in four countries, including India, for which he received a Fulbright Research Fellowship. These experiments...
View all posts by M. Aaron Owen >