Can the data from EA's FIFA Potential Rating Help Bettors?

Anyone in sports betting or gambling all know that the odds are always against them, yet the enjoyment, chase, and optimism of winning make people continually bet even with or without any source of data to back up the odds. Finding a competitive advantage against the odds is always something that the community chases in order to make easier and better decisions.

In the world of soccer, one of the most exciting aspects of the game is the development of young players (players 23 and under). Watching their development creates excitement for the next generation of world class talents. The younger a player is, the more hype is created due to the amount of time that they can develop. Young players typically don't play at world class clubs due to playing time being limited and taken by already established standout players so they typically play at smaller clubs that allow them to gain the experience and development that will lead them to reach their potentials.

Most soccer players have their peak playing years in their late twenties so if a player is still a teenager with a few good performances in the first team, the media and fanbase tend to create a lot of optimism towards that player's potential especially if they play for a big club.

When the spotlight is on these youngsters, gamblers and bettors take notice and monitor these players. As a sports bettor, there are many aspects on soccer an individual can bet on like what stats could come out of a single game, player transfers throughout the season, coaching changes, or even the outcome of a team for the whole season. There's a lot of money to be won, but the algorithms and probabilities of how the odds are calculated are quite complex that bettors need to have extensive knowledge of the game, league, nation, etc. to make decisions that could win a lot of money or lose a lot of money.

In this project we will see if a bettor or gambler can use FIFA, a video game series developed by Electronic Arts(EA) , to see if their rating system data on youngsters can influence betting decisions or investments into memorabilia.

Our metric to use whether we can use FIFA as an influencer in betting or buying memorabilia is to see proportions of a youngster hitting their potential rating (what they are touted to be according to EA). I'd like to check if we can select a random youngster from the current iteration of FIFA and based on EA's  rating system, have another affirmation on whether to take on a bet. If there are good results from this study, we can potentially use  these findings to bet or invest on certain scenarios such as:

Background Information and Data on FIFA

Player ratings in FIFA are developed by a lot of metrics from EA's development team. It's an aggregate of player's real life  ability and performances, media’s opinion on them, and many other factors. Ratings can range anywhere from 28-99.

Process and Visualizations of Data

To get the dataset to research FIFA, I first web scraped sofifa.com, a website dedicated to displaying all players potential rating for the future and their overall rating any iteration of FIFA. I scraped data from the top 300 potentially rated youngsters from FIFA 10 all the way to FIFA 21. Potential ratings range anywhere from 82-95.

Here is a sample of how my dataset would look after I web scraped sofifa.com

If a player is classified as still young, they haven't hit their potential rating from any specific FIFA yet and to this day are still younger than their prime playing years. According to The Athletic, the average peak playing years for each player depends on their position and is as follows:

These are examples of how I compared each players potential rating using data. I would compare the potential rating of a specific FIFA and then check all of their overall ratings for the next FIFA up until FIFA 22.

This is an example of a player who exceeded their potential rating from FIFA 10: 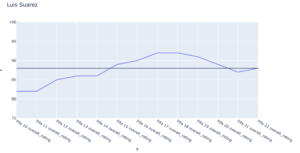 This is an example of a player who didn't live up to their expectations their potential rating from FIFA 10: 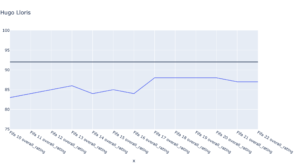 I analyzed the top 300 potential youngsters for each fifa and all FIFAs. Here's the player outcomes  for each FIFA. 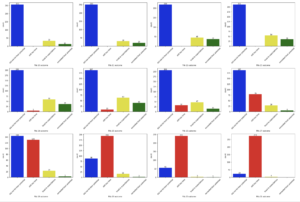 Here's the breakdown for all 3600 players analyzed from all the FIFAs. 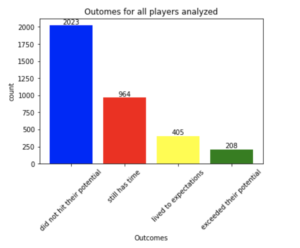 After analyzing the player outcomes of  each FIFA and all FIFAs, I then analyzed youngsters hitting their potential by age. The analysis can be shown right below 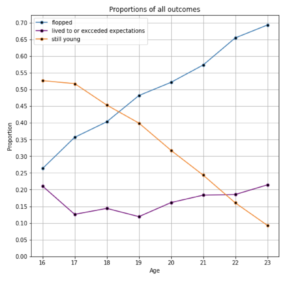 Conclusions so far from the data:

When analyzing player outcomes by age, the proportion of players hitting their potential or exceeding them ranged anywhere from 12-22%. From the initial findings, it doesn't seem like a great idea to pick a random youngster and use EA's rating system as another affirmation to take on a bet or buying memorabilia.

Important notes about the data:

Just because a youngster doesn't reach a potential rating from a specific FIFA doesn't mean they lack quality in real life. Some of these youngsters may never had the overall rating of Messi or Ronaldo but that doesn't mean they can't compete against them.

In the datasets, youngsters are repeated in a bunch of iterations of FIFA. For example, Virgil Van Dijk exceeded all his potential ratings when he was youngster. Then there are youngsters who never hit their potential rating in every FIFA or lived to their expectations in ever FIFA. Do these youngsters have an effect on the data and conclusions?

I used The Athletic's metric of prime playing years which is based on the distribution of minutes given to players based on age. That study was done for the premier league from the last 10 seasons.

If I had more time:

I would've analyzed player outcome by potential rating, club, position, and nation to see if EA had a better rating system based on these categories.

I would've also analyzed to see the youngsters' real life stats from past to see if there's a correlation between player potential ratings and real life stats.

Data Scientist with six years of experience in automotive and direct sales. Graduated with a BS in Business Management from Rutgers University in 2019.
View all posts by Kenny Bagaloyos >

Big Data
Data Is In The Eye Of The Beholder
Meetup
Locations, Industries & Years: A Deep Dive into Unicorn Companies
Meetup
Analysis of Mass Shootings and Gun Ownership in the United States
Python
Veg Stars Up For Grabs: Perspectives from Yelp
Meetup
Linear and Random Forest Forest Regression Analysis on House Prices