The developed code is found on Github, and the trained CNN models can be downloaded in the following links:

Breast cancer is the second leading cause of deaths among American women. The average risk of a woman in the United States developing breast cancer sometime in her life is approximately 12.4% [1]. Screen x-ray mammography have been adopted worldwide to help detect cancer in its early stages. As a result, we've seen a 20-40% mortality reduction [2]. In recent years, the prevalence of digital mammogram images have made it possible to apply deep learning methods to cancer detection [3]. Advances in deep neural networks enable automatic learning from large-scale image data sets and detecting abnormalities in mammography [4, 5].

Considering the benefits of using deep learning in image classification problem (e.g., automatic feature extraction from raw data), I developed a deep Convolutional Neural Network (CNN) that is trained to read mammography images and classify them into the following five instances:

Because all the files obtained from the CBIS-DDSM database have the same name (i.e., 000000.dcm), I had to rename each file, so each one would have a distinct name. To that end, I wrote a Python script to rename each file's name with the folder and sub-folder names that include patient ID, breast side (i.e., Left vs. Right), and image view (i.e., CC vs. MLO) information.

The original file formats of the DDSM and CBIS-DDSM images are LJPEG (i.e., Lossless JPEG) and DICOM (i.e., Digital Imaging and Communications in Medicine), respectively. Since the original formats can be handled only with specific software (or program), I converted them all into 'PNG' format using MicroDicom  and the scripts from Github.

As illustrated in Figure 2, the raw mammography images (see Figure 2-(a)) contain artifacts which could be a major issue in the CNN development. To remove the artifacts, I created a mask image (Figure 2-(b)) for each raw image by selecting the largest object from a binary image and filled white gaps (i.e., artifacts) in the background image. I used the Otsu segmentation method to differentiate the breast image area with the background image area for the artifacts removal. Then, the boundary of the breast image was smoothed using the openCv morphologyEx method (see Figure 2-(c)).

After completion of the preprocessing task, I stored all the images as 8-bit unsigned integers ranging from 0 to 255, which were then normalized to have the pixel intensity range between 0 and 1.

The CBIS-DDSM database provides the data description CSV files that include pixel-wise annotations for the regions of interest (ROI), abnormality type (e.g., mass vs. calcification), pathology (e.g., benign vs. malignant), etc. as shown in Figure 3-(a).

In the pathology column, 'BENIGN_WITHOUT_CALLBACK' was converted to  'BENIGN'. The Image_Name column was created with patient ID, breast side, and image view, and then set as the index column as shown in Figure 3-(b) below.

After that, each label was encoded into one of the categories shown below.

Considering the size of data sets and available computing power, I decided to develop a patch classifier rather than a whole image classifier. For this purpose, image patch extractions for the normal and abnormal images were conducted in two different way:

Overall, I could extract a total of 50,718 patches, 85% of which normal and 15% abnormal (e.g., either benign or malignant) cases. This was just intended to reflect the real-world condition. In real-world cases, the mean abnormal interpretation rate is about 12% [8].

The extracted patches were split into the training and test (i.e., 80/20) data sets. In the test set, I further isolated 50% of the patches to create a validation set. Examples of extracted abnormal patches are shown in Figure 5. 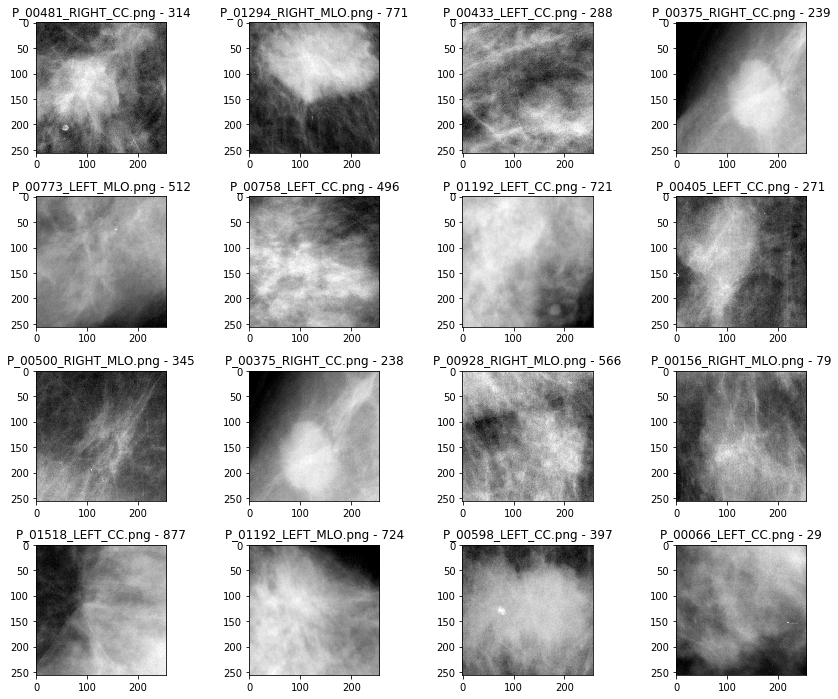 I designed a baseline model with a VGG (Visual Geometry Group) type structure, which includes a block of two convolutional layers with small 3×3 filters followed by a max pooling layer. The final model has four repeated blocks, and each block has a batch normalization layer followed by a max pooling layer and dropout layer. Each convolutional layer has 3×3 filters, ReLU activation, and he_uniform kernel initializer with same padding, ensuring the output feature maps have the same width and height. The architecture of the developed CNN is shown in Figure 6.

The CNN model in Figure 6 was developed through 7 steps. The interim models were trained and evaluated with the training, validation, and test data sets. The initial number of epoch for model training was 50, and then increased to 100. I selected Adam as the optimizer and set the batch size to be 32. Model training involved tuning the hyper parameters, such as beta_1, and beta_2 for the optimizer, dropout rate, and learning rate. The results of train and validation accuracy and loss of the interim models are shown in Figure 7. Overall, the accuracy of the baseline model with the test data was more than 80%, but a significant overfitting also occurred. To address this, I added a dropout layer in each block and/or applied kernel regularizer in the convolutional layers.

The model training in this project was carried out on a Windows 10 computer equipped with an NVIDIA 8GB RTX 2080 Super GPU card. The CNN model was developed with TensorFlow 2.0 and Keras 2.3.0.

The accuracy of the developed model achieved with the test data was 90.7%. However, the accuracy is not a proper evaluation metric in this project because the number of samples per class is highly unbalanced. With imbalanced classes, it's easy to get a high accuracy without actually making useful predictions. Thus, a confusion matrix was estimated to understand classification result per class (see Figure 8). Note that 0, 1, 2, 3, and 4 represent Normal, Benign Calcification, Benign Mass, Malignant Calcification, and Malignant Mass, respectively. 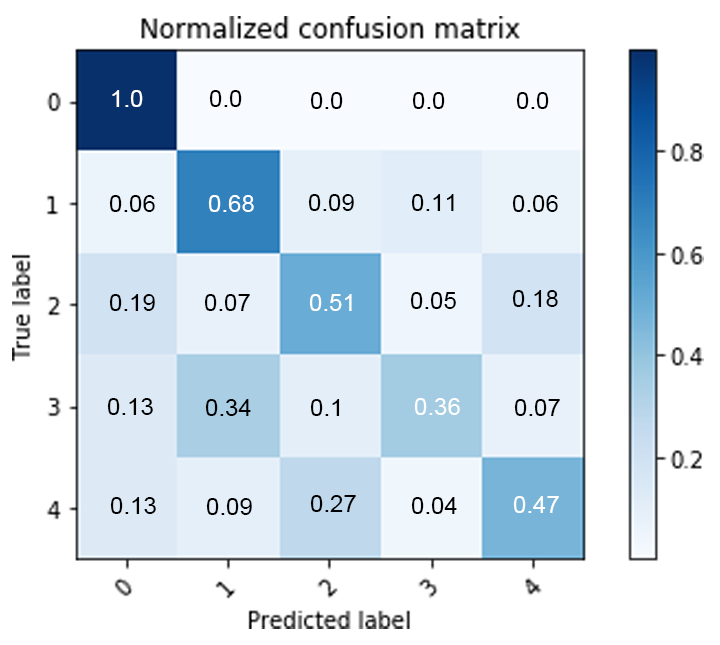 Considering the data imbalance, I re-trained the multi-class classification model by assigning the balanced class weight. The weights were computed with scikit-learn 'class_weight.' The computed weights are shown below:

Figure 11 shows Precision-Recall (PR) curve as well as F1-curve for each class. 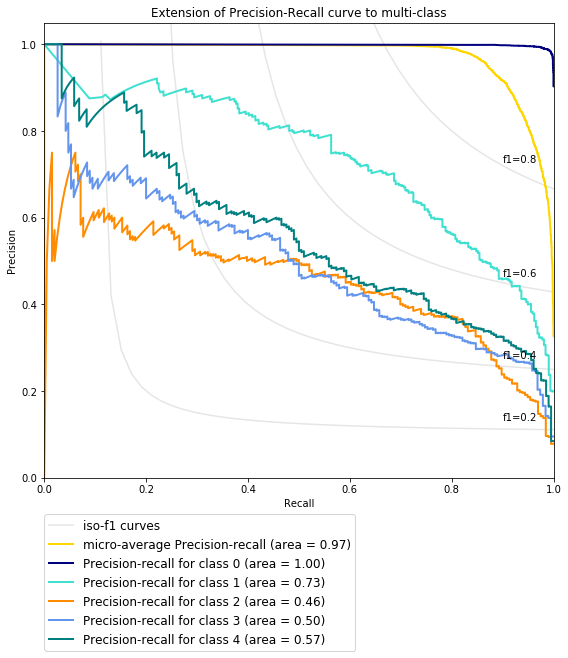 Corresponding precision and recall for detecting abnormalities were also calculated, and the results are shown below. The binary classification model achieved great precision and recall values, which is far better than those obtained with the multi-class classification model. It should be noted that recall is a more important measure than precision for rare cancer detection because anything that does not account for false negatives is a critical issue in cancer detection. 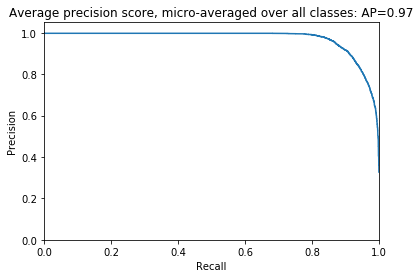 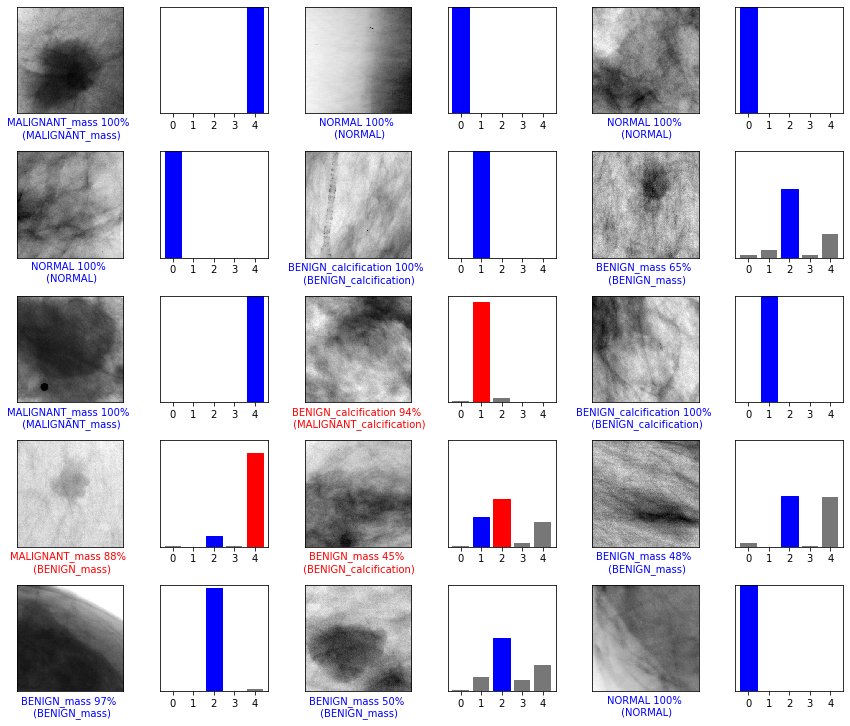 Throughout this capstone project, I developed the two Convolutional Neural Network (CNN) models for mammography image classification. The two models were developed with highly imbalanced data sets. The first model (i.e., multi-class classification) was trained to classify the images into five instances: Normal, Benign Calcification, Benign Mass, Malignant Calcification, and Malignant Mass. The other model (i.e., binary classification) was trained to detect normal and abnormal cases. Notable findings of this project are summarized below:

This project will be enhanced by investigating the ways to increase the precision and recall values of the multi-class classification model. An immediate extension of this project is to investigate the model performance after adding additional blocks/layers into the existing CNN model and tuning hyper-parameters. In the meantime, I will examine the data imbalance issue with both over-sampling and under-sampling techniques. Additionally, I will improve the developed CNN model by integrating with a whole image classifier.