uch food is wasted because people don’t know how to use up what they have when planning their meals. They also often revert to the recipes they already know and repeat the same meals multiple a times a week until they grow bored and lose motivation to cook. While there is no shortage of recipes online, it can be difficult to find the one that draws on what you have on hand. 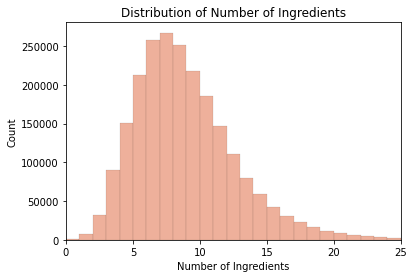 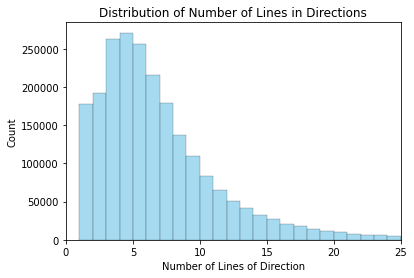 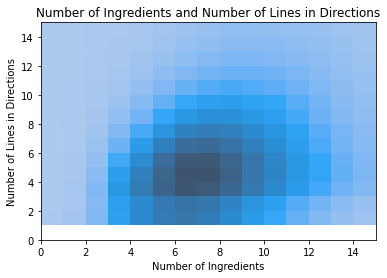 After completing the initial EDA, it was necessary to perform certain data cleaning. This cleaning included removing errors in the dataset--  more specifically the directions column – removing stop words, punctuations, and lemmatizing words. The main error found in the directions column was related to a Unicode error which caused the degree symbol, °, to print as ‘u00b0’. 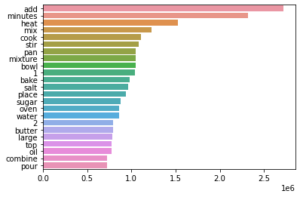 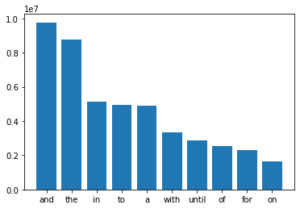 In order to analyze the most frequent word combinations, bi-grams and tri-grams were used and plotted. The top bi-grams consisted mainly of stop words, while tri-grams were more related to oven utilization, time management, and food seasoning. 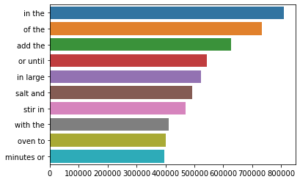 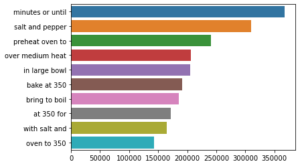 Recipes in the dataset corresponded to different food types, cooking methods, and preparation. Word clouds were generated to observe the most common words in each of the dataset’s columns, title, ingredients, and directions. The larger the word in the word cloud, the more frequent the word appears in their respective column.

Following EDA and data cleaning, model selection and building were required. Regarding model selection, two NLP models were chosen, Top2Vec and Gensim (LDA). Top2Vec is known for detecting topics in text data and generating embedded topic, document, and word vectors. Its advantages for this project are the automatic number of topics chosen and the built-in search engine Top2Vec offers. In terms of its disadvantages, Top2Vec results in many outliers and could result in too many topics.

Gensim, or Latent Dirichlet Allocation, is a generative statistical model that explains a set of observations through unobserved groups in which each group explains why some parts of the data are similar. LDA, compared to other NLP models, is easier to interpret due to the lower number of topics and one document can contain several different topics. Regrettably, LDA could easily produce overlapping and/or incoherent topics.

To begin modeling, a sample of 10,000 entries of the cleaned directions column was used. Once the initial LDA model was created, a default output of 20 topics was outputted. The visualizations built from the LDA model are shown below. The intertopic distance map plots the 20 different topics created by the model.

As observed, clusters can be seen with a certain overlap between topics. The top 30 most salient terms are the most informative words concerning a specific topic. The higher the saliency score, the more valuable it is for identifying particular topics. Each word’s corresponding bar refers to the frequency in the sample set.

While the initial LDA model provided some clarity on the sample set, it was necessary to optimize the LDA model to search for the best number of topics. The coherence plot is a line plot that contains the number of topics on the X-axis and the model’s coherence score on the Y-axis. Coherence measures the score topics by measuring the semantic similarity between high-scoring words. 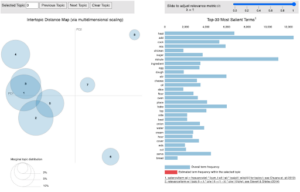 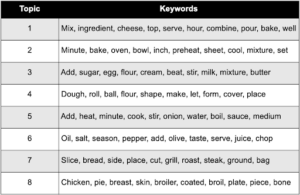 Top keywords corresponding to each topic

Regarding the eight topics outputted by the model, the keywords table demonstrates keywords associated with each topic, helping describe and categorize topics.

A benefit of using LDA is the model’s ability to assign each recipe in our sample dataset to a certain topic. Document_No refers to a specific recipe entry, Dominant_Topic refers to the topic the model assigned the recipe to, and the Topic_Perc_Contrib shows how correlated or close the recipe is to the topic, based on a value from 0 to 100.

As with the LDA model, we used the same 10,000 samples from our data set to create a model using Top2Vec, another unsupervised learning method. Top2Vec takes the texts and turns them into vectors, which it then clusters by similarities, then assigns topics to the clusters. There were two main reasons for us to use Top2Vec. The first is that Top2Vec automatically determines the number of topics, which in our case turned out to be 96. The other is that Top2Vec has a built-in search function, which is a great feature for creating a user interface that could present search and recommendation results. 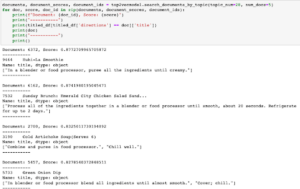 Topic 4 is a word cloud based around salads 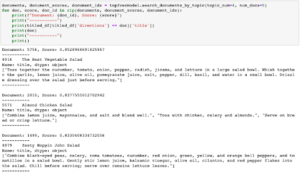 Topic 28 is for smoothies and blended foods

Examples of Top2Vec’s search function in which the recipes returned  are most closely associated with the topic.

As mentioned previously, one of the main appeals of using Top2Vec was the ease of searching. This allowed us to build a basic search interface by using Dash in order to allow an end user to search the model we built.

In conclusion, unsupervised learning used for NLP is effective on the dataset. Our NLP models can suggest the top five recipes based on the ingredients and underlying topics. This helps people find the recipes that they are more interested in more efficiently.

This model can be used to support a recipe search engine and can be recommended for many uses.  For example, keywords can be entered and the search engine using this model in the background would populate the most relevant recipes. This model is also helpful in helping find which recipes and categories are surprisingly related.

Perhaps there is an underlying relationship between gazpachos and salads, and this model could bring that information to light. This model could also be used by businesses to  recommend additional products based on the recipes that their customers are cooking. For example, businesses could suggest buying birthday candles or champagne to someone who selects a cake recipe.

In our next steps, we would like to expand our analysis to all2 million observations in the  dataset. This would require us to work with big data on platforms such as Google Collab or Databricks. We would also like to expand our LDA query model to keep tuning it for improvement and update it with new data points.

Having already started a Dash website for this project to host live recipe searches, we would like to have the site go live.. In the site, it would be nice to add common search filters, such as “breakfast” and “vegetarian.” Lastly, we would like our model to learn from user behavior, so whenever a user searches for recipes they could see if- if they made it and  liked the recommendations.

Hi, I had my start in analytics with psychology and am interested in data science, particularly within social fields.
View all posts by Tam Trinh >