Data Analysis on the Effect of College Selection on ROI

Data shows college selection is an exciting, yet anxiety-inducing, process for high school seniors and parents alike. While higher education was seen as a period for self-exploration and expanding one's mind, ever-increasing tuition costs have forced a sense of pragmatism - emphasizing university as an investment. Growing up in Texas, I attended Texas Tech University as most students apply to public universities due to the strength of the state institutions. Moving to Philadelphia to attend Drexel University and the University of Pennsylvania exposed me to emphasis placed on private and Ivy League education in the North-East corridor.

This experience begs the question: What is the expected return on investment of higher education? Is there a difference between public and private universities, and is this different regional? What majors yield the highest return?

Using a dataset obtained from a website using a custom-written Selenium web scraper, the current project aims to explore the relationships between levels of education, type of education, major, and region, and estimated 20 year ROI. The results of the present study found that the benefits of a private school education may be limited to the North East, and noted differences between public and private school ROI when broke down by major. This information may be vital as students and families plan for the future.

Python and the Selenium library were used to web scrape PayScale.com, a public-facing research center that collects education and salary data collected from 3.5 million civilian employees. Three specific sites were scraped to collect (1) early- and mid-career salaries of bachelor and associate degrees; (2)  estimated ROI per college, by state; and (3) estimated ROI by major.

Additionally, data obtained from service academies (ie. military academies) and data including out-of-state metrics from Public universities were excluded from analyses as they would have minimized differences between Public and Private education metrics.

Earn more with a bachelor's degree 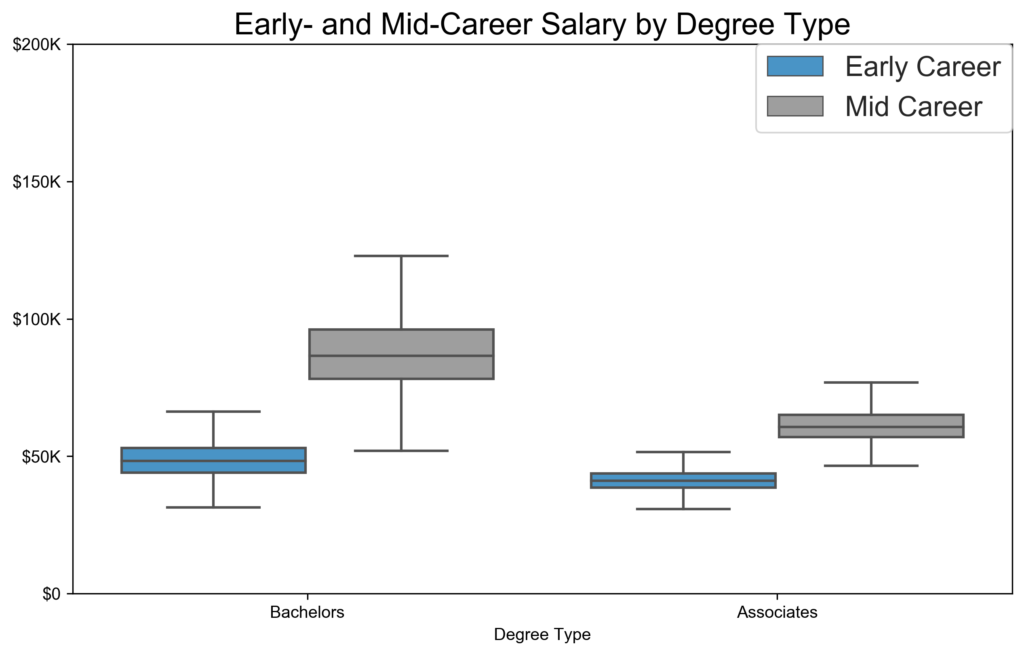 Data on Financial Aid props up the ROI of private universities

A private education may not be beneficial in each state

Data on Differences in ROI existed between college majors

The results of the current project should be considered when selecting a college and major. Graduates of four-year colleges significantly out-earned their associate degree counterparts, earning 17% more within 0-5yrs; increasing to 36% in year 5-10. Available data did not allow for 20yr ROI comparisons that would account for differences in education cost. Financial aid/grants subsidized as much as 11% of four-year private colleges that would otherwise result in a negative ROI. Only 2% of four-year public universities returned a negative ROI without financial aid.

Although this project successfully presented analyses that may potentially aid the college decision-making process, a significant flaw in the estimation of 20yr ROI minimizes the validity of the reported results.  Estimated ROI takes into consideration (1) 20yr median pay for bachelor-only grads, (2) 24yr median pay for high school grad, and (3) total four-year cost of the university. The estimation incorrectly assumes the cost of the university is the list price and doesn't take into consideration loan interest and length of repayment.

A recent government report found that the typical repayment period for borrows with between $20k and $40k in student loans was over 20 years [studentaid.gov]. For example, a student with $100k in federal loans, with an 8% interest compounded monthly, the actual cost of higher education would be over $200k - generously assuming a 20yr repayment period. Including interest and repayment period would dramatically change the ROI of colleges across the country, and the analyses presented.