Data confirms the real estate market is constantly changing with moving economic factors (supply, demand, cost of living index, unemployment rates, etc.). Real estate buyers and sellers must constantly adjust pricing of products to be competitive in the marketplace. In order to be better informed when making pricing decisions, understanding trends and being able to make predictions about the future is imperative.

The primary dataset for this project was taken from Kaggle and contained 2,580 observations of house sales for Ames, Iowa. The dataset contained 80 features (approximately 37 numeric type features and 43 categorical string type features). Recorded sale price was the target variable. The observations of sales provided were from January 2006 to March 2010. A supplemental Ames Real Estate dataset with information up to 2020 was used to incorporate addresses and geo-coordinates for each observation.

We conducted an exploratory data analysis to view the characteristics of this dataset. First, we plotted a histogram to view the distribution of the sale price. 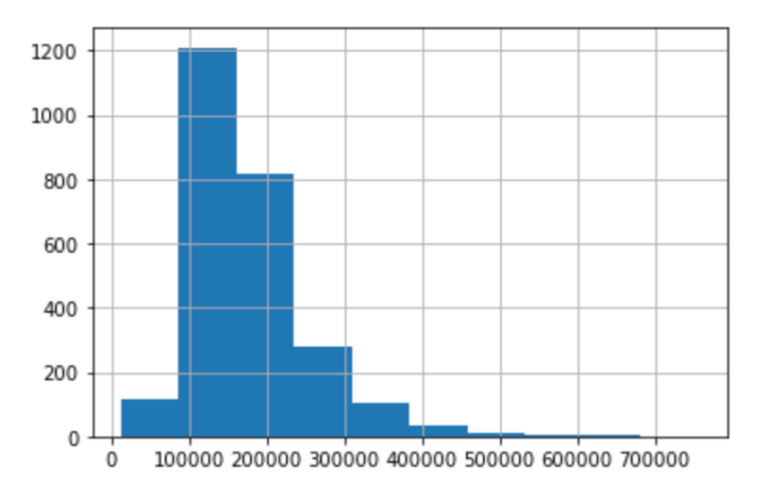 The figure above shows the distribution is skewed right due to a small number of higher priced houses. When the houses with sale prices greater than $300,000 are filtered out the distribution appears to be normal. 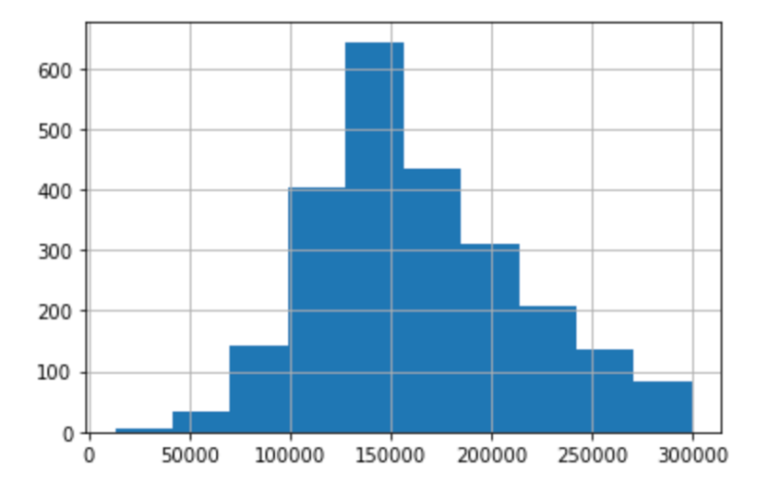 Next, we made a correlation heat map of some of the numeric type features. 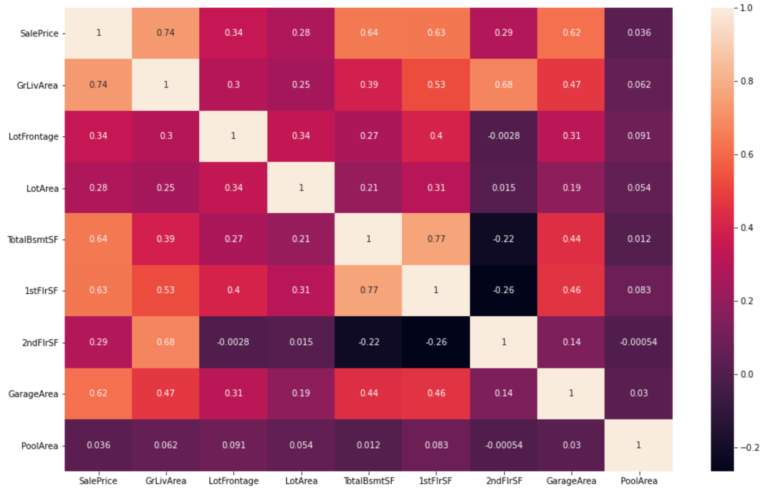 PoolArea appears to have the least correlation with SalePrice. SalePrice was more correlated with GrLivArea, TotalBsmtSF, 1stFlrSF, and GarageArea. We also noticed that GrLivArea was somewhat correlated with 2ndFlrSF and 1stFlrSF which will be useful for the feature engineering.

Next, we took a look at the average sale price over time. 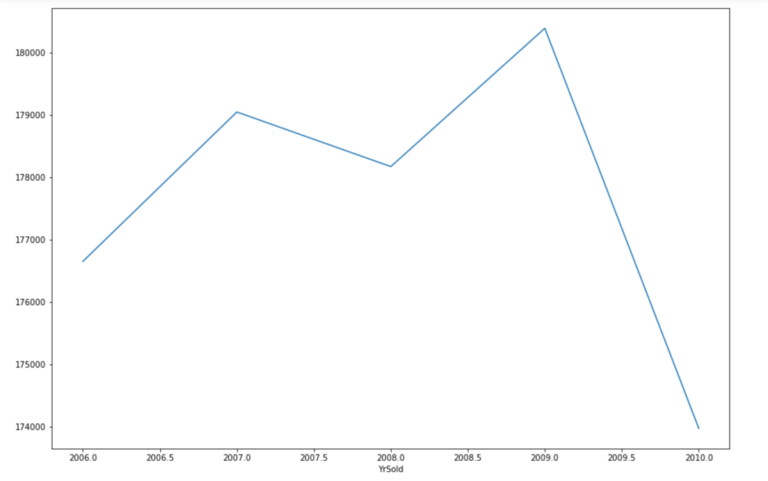 We can see from the chart above that the prices were generally increasing until the market crashed in 2009 and the average sale price plummeted. We also took a look at how the seasons affect transactions. 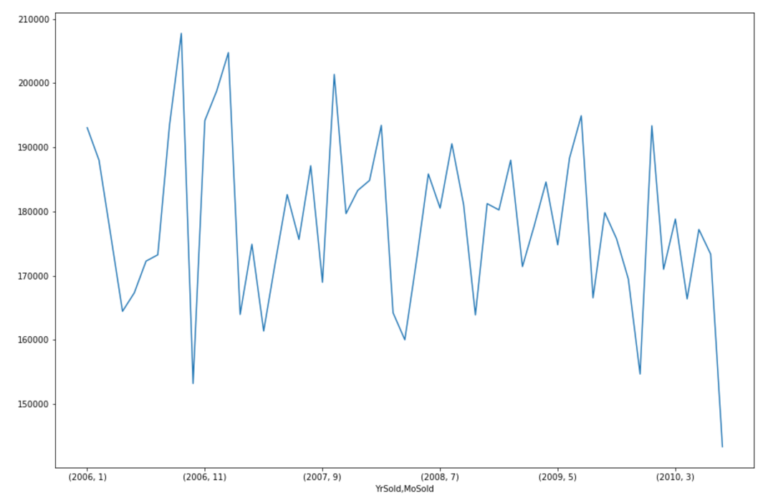 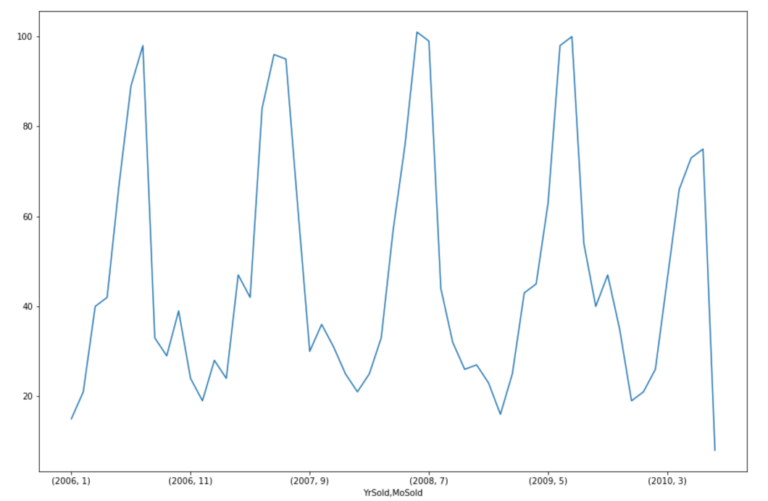 Finally, we took a look at the distribution of some of the numeric features. 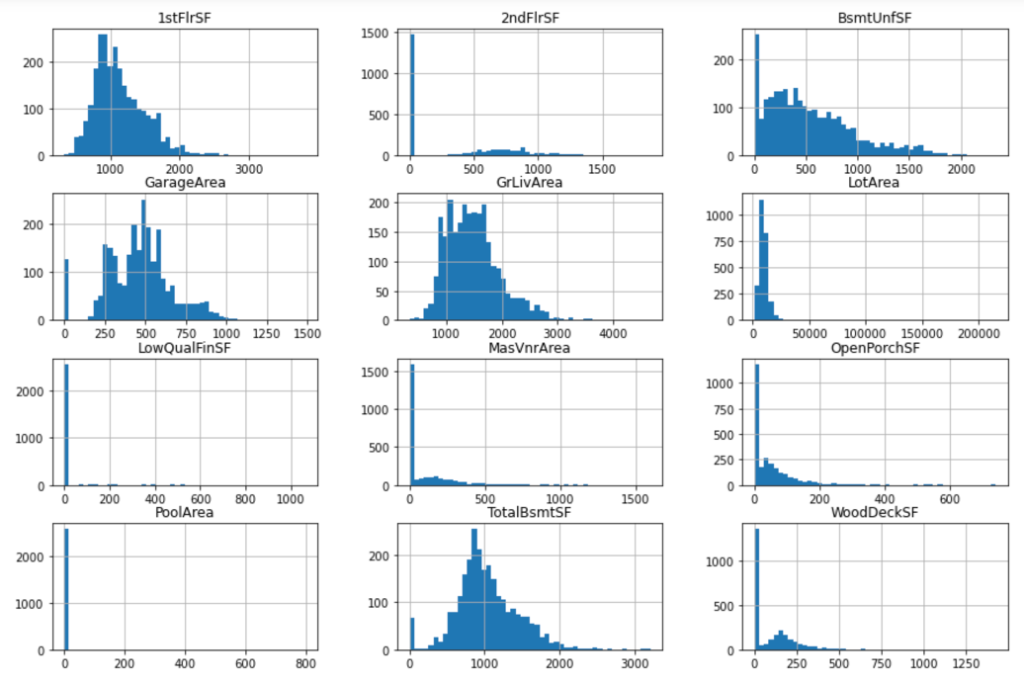 We see that a large quantity of features have a significant number of 0 values, which means that a lot of houses are lacking that specific feature. The observation that the numeric features are not normally distributed was important as we scaled features for training the models.

In order to ensure the models provide accurate and interpretable results, several steps were taken to clean the data and engineer new features.

First, we filtered out all sales that were not listed as a “normal” sale condition. We did this as we realized that 94% of the recorded sales were normal and the ones that were not tended to be outliers and inconsistent in terms of sale price. All non-normal sales were removed from the dataset. Next, we created methods to handle null and missing values.

Every column in the dataset contained at least one missing value, and several had over 2,000 rows of null values. For each column, the team discussed whether it would be best to remove the feature or fill the null value with the mean of the column, zero, or some other value.

For numerical columns such as BsmtFinSF, MasVnrArea, BsmtFullBath, BsmtHalfBath, GarageCars, and GarageArea, we replaced null values with 0 as a null value represented the fact that the house did not contain the feature.

While for LotFrontage and GarageYrBlt, we decided to fill null values with the column mean as it often reflected poor quality in the data, not a missing feature. Lastly, for all categorical variables, we decided to fill all null values with a string that read “no_variable”. This allowed us to easily use these tags for dummifiying and ordinal encoding in later stages of the project.

In addition to data cleaning, we also performed feature engineering in order to create helpful inputs and reduce multicollinearity.

The first step of this process was to find correlated variables and determine if any of them could be combined. We decided to make four features: total bath, total living area (square feet), basement unfinished ratio, and total rooms above ground (excluding bedrooms). After creating these features, we removed the features used to create them in order to avoid multicollinearity.

Lastly, we looked at ways to simplify our model and remove unnecessary features. Using a correlation plot and a preliminary lasso model as reference, we decided to remove 24 features. Often, these features were categorical and only a small percentage of the homes contained them. For example, only 10 houses in the dataset had a pool, so we decided to remove this feature all together.

After the feature engineering was completed, we did a cook’s distance test to determine outlier observations within the data. Four observations with p-values < 0.05 were deemed outliers and removed from the data set.

We then created four different subsegments of the data after the testing was completed.

For the modeling portion of the project, 2 transformations of the data set were used. A dummified data set was used for the linear models (lasso, ridge, elastic, support vector regression) and a label encoded data set was used for the tree based models (random forest, gradient boost, cat boost). The transformations for categorical variable encoding were done after the train-test split to ensure the training set remained independent.

The process for training was consistent across all models. A grid search was used with 5 cross validation folds for hyperparameter tuning. When the optimal parameters for each model were found the models were retrained on the full training set and then evaluated on the test set. The metrics used to evaluate the models were R^2 score and RMSE.

Summary of model evaluation results are below:

Following the evaluation of individual models, the top 6 were chosen to be ensembled. The ensemble model took the average prediction across the 6 models to get a final overall prediction. The R^2 score of the final ensembled model was 0.9561.

We designed a dashboard to create a tool for potential stakeholders to visualize the data and view sale price predictions based on customizable feature input values.

The dashboard was created in Tableau and utilized filters to sort and aggregate the data to make it easier for users to visualize trends. The dashboard allows users to easily group features such as “Neighborhood” or “# of Bedrooms” and the dashboard would return the average sale price for the applied filter. This tool is useful for potential buyers/sellers or realtors who can easily click and aggregate data for their needs.

We also created a “Prediction” tab that would use a linear model to provide a prediction for the price of a home based on certain features that a user could change (i.e: # of bedroom, bathrooms, etc). From the predicted home value provided, a user could determine if a home listed in the area is over/under market value based on the model.

This was a great first step into applying machine learning to the housing data set to make predictions for housing prices. There are areas we would love to revisit, rethink and add on to this analysis:

View all posts by Jung Lim >