When I was researching data on crime rates for my visualization project (check it out here!), I discovered that more than 16,000 people died last year as a result of homicide, around 11,000 of which were from guns. While both of those numbers are incredibly high, I was shocked to discover that they are overshadowed by another number: driving fatalities. 32,675 Americans lost their life last year as a result of a car accident, making it the number one accidental cause of death in this country. Unless you are a BASE jumping enthusiast or an amateur deep sea diver, it is very likely that driving is the most dangerous thing you do every day.

Despite these statistics, driving is very rarely treated as a dangerous activity. Many people still drink and drive, despite the growing popularity of Uber and Lyft. And who among us can say they've never glanced at their phone while behind the wheel? In terms of policy, however, driving receives a disproportionately low amount of attention considering the amount of destruction it causes. There are countless politicians who have built their careers as being tough on crime, yet I don't know of a single successful politician who has run on the platform of being a safe driving enthusiast.

This problem is obviously far more complex than the scope of this project. The goal of this app is to simply facilitate a better understanding of the driving problem in the United States. In which states is drunk driving the worst? Where is there the most distracted driving? How much does speeding play a role in these accidents? I hope these questions and more can be answered through investigation of this data. I hope you enjoy it, and please remember to drive safely!

The National Highway Traffic Safety Administration (NHSTA) releases a yearly report detailing every fatal accident in the US. The report contains a wide variety of variables about the mechanics of the crash, the location, and the passengers involved. It also contains data regarding the blood alcohol content of the driver, whether the driver was distracted, and whether either party was speeding. We'll focus on those variables for this app.

The data was in the SAS format, which I read in to R using the sas7bdat package. The data after 2012 contained two extra columns, which needed to be dropped. I cycled through each year of data and appended them together into one large dataset.

From this main dataset, I created separate datasets for fatalities related to distracted driving, drunk driving, and speeding. The key variables were also broken out using different numeric systems, so I normalized them to be either zeros or ones.

The NHSTA dataset didn't contain any population data, so that needed to be merged in. I used the state level population data from the Uniform Crime Reports that I had previously downloaded, and calculated the rate of driving fatalities in each state.

I used tabs to organize the graphs, and used the shiny theme 'spacelab'. Here is one example of a panel, you can view the rest on my Github here.

The outputed data was based on the selector in the UI, which I adjusted using a series of logicals. I then used Plotly to create the graphs. 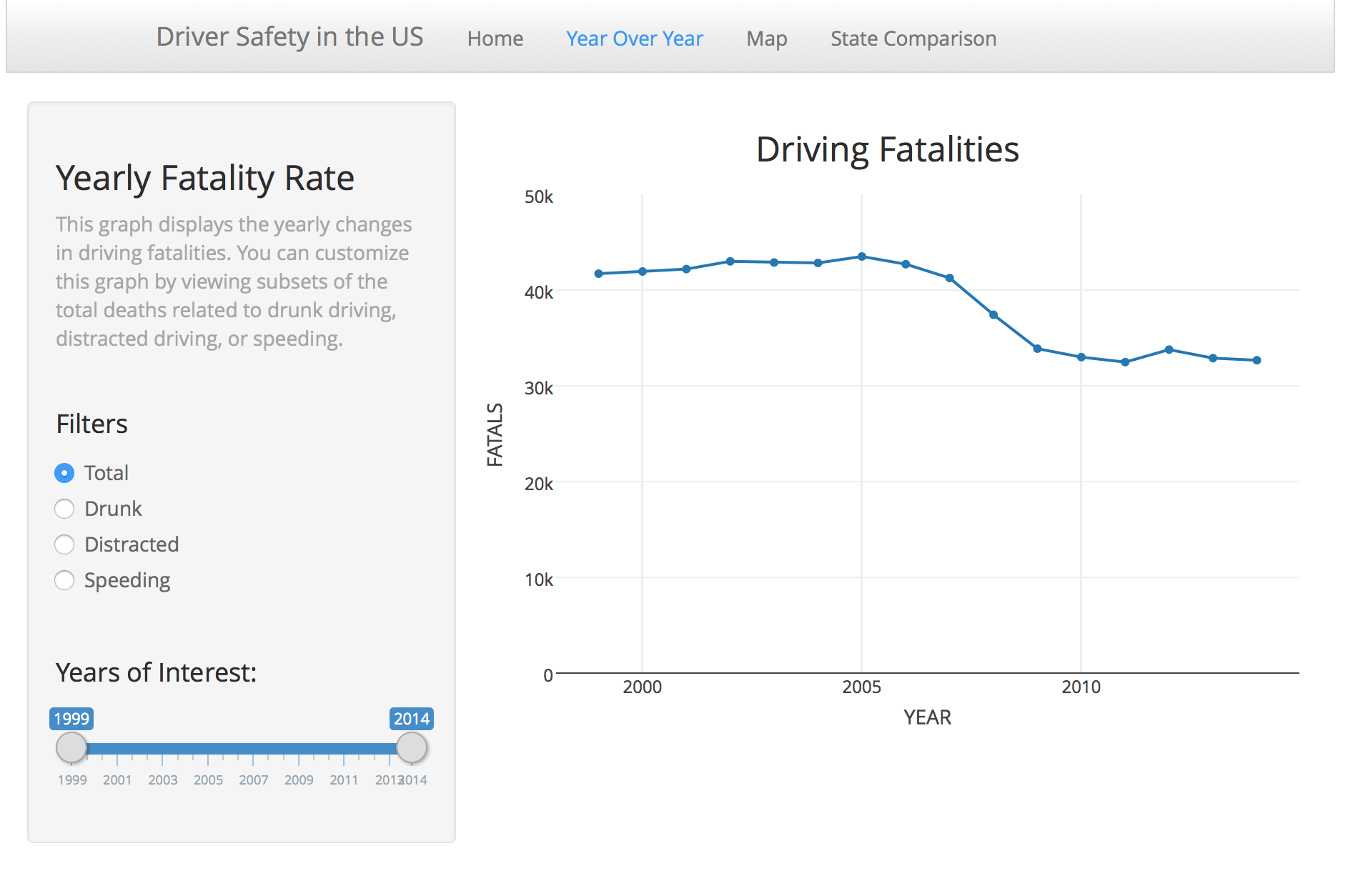 Driving fatalities have clearly decreased in the past 10 years, with the overall numbers decreasing around the time of the financial recession and continuing to stay low even into the recovery. It's unclear exactly why this decrease happened, however I imagine it was a combination of safer cars combined with lower levels of driving. Drunk driving, distracted driving, and speeding all seemed to follow a similar trend, suggesting that the rate of these dangerous driving hasn't decreased significantly in the past ten years. 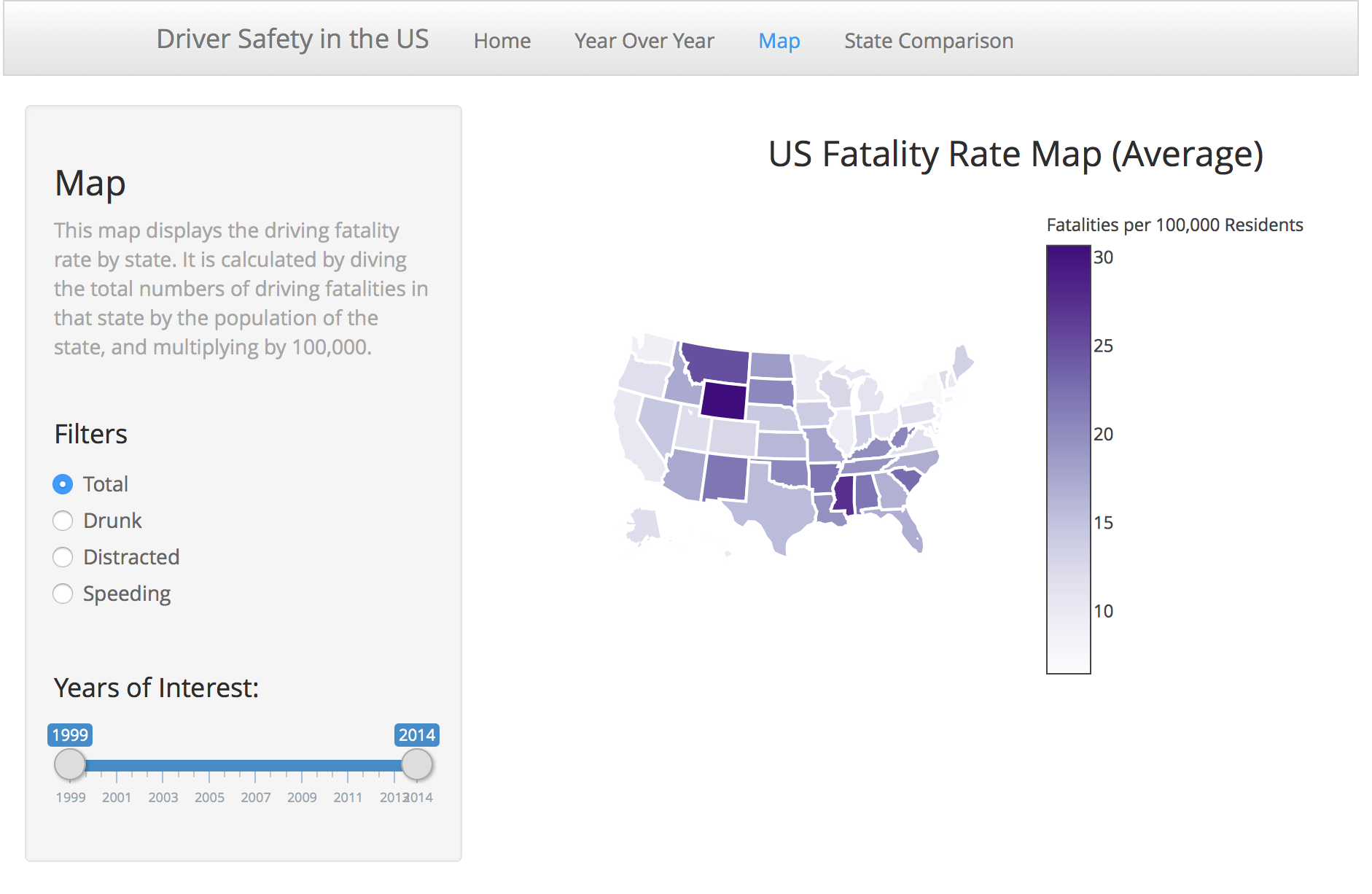 Wyoming is the clear "leader" in fatality rate, with over 30 people per 100,000 dying in a car accident. Montana and Mississippi have also seen very high rates of driving fatalities. It seems that states with large urban populations tend to have lower rates of drunk driving. While it's not immediately evident why this trend has developed, I would guess it mainly has to do with the fact that people tend to drive at lower speeds in large cities (compared with states that are very highway heavy). It could also be linked to the better sources of public transportation in cities. 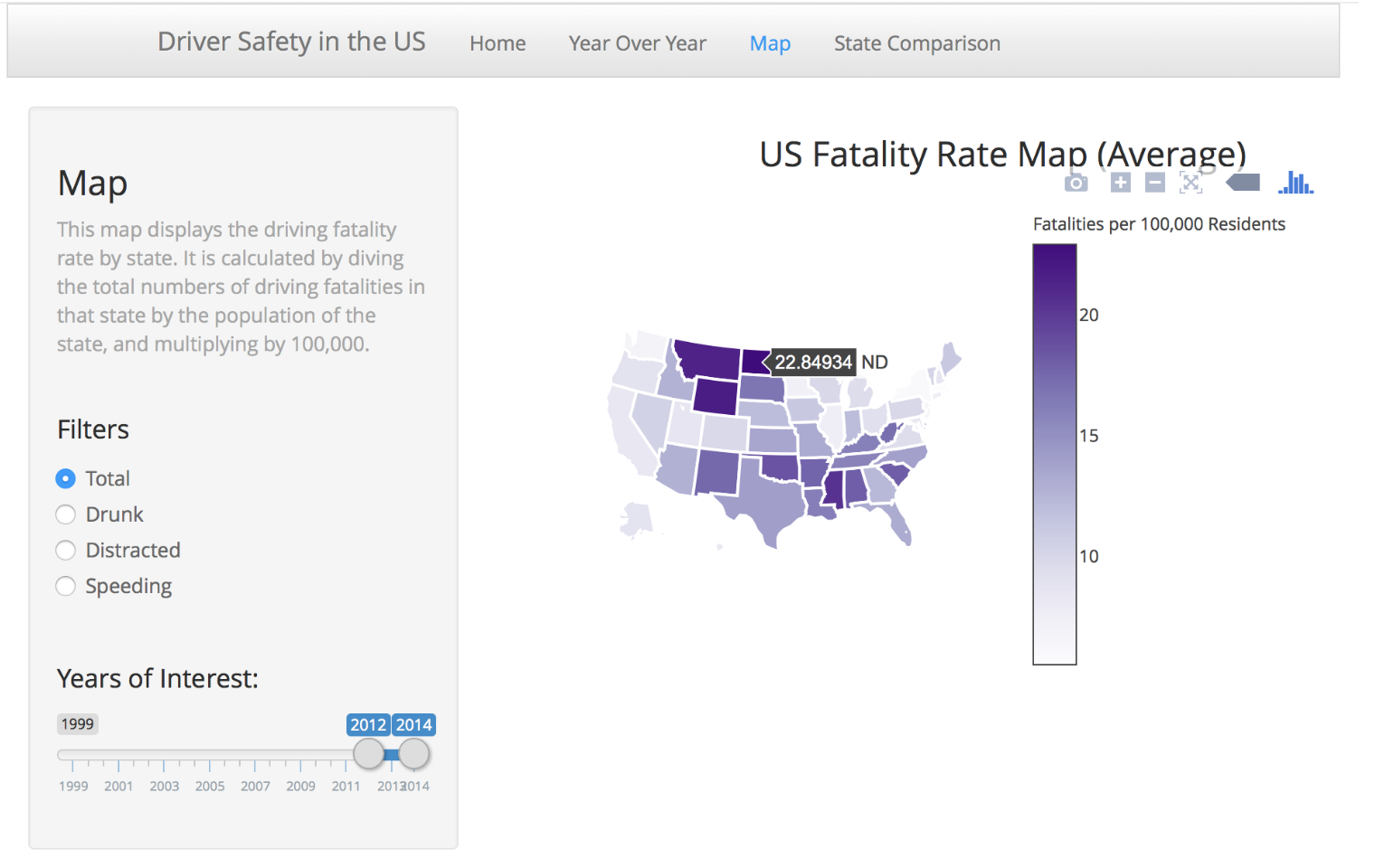 In recent times, driving fatalities in North Dakota have increased dramatically, likely as a result of the shall gas boom. States dominated by cities continue to be lower than other states. These are only a few of the many insights that can be gleaned from this map, and I encourage you to play around with different combinations of filters and year ranges. 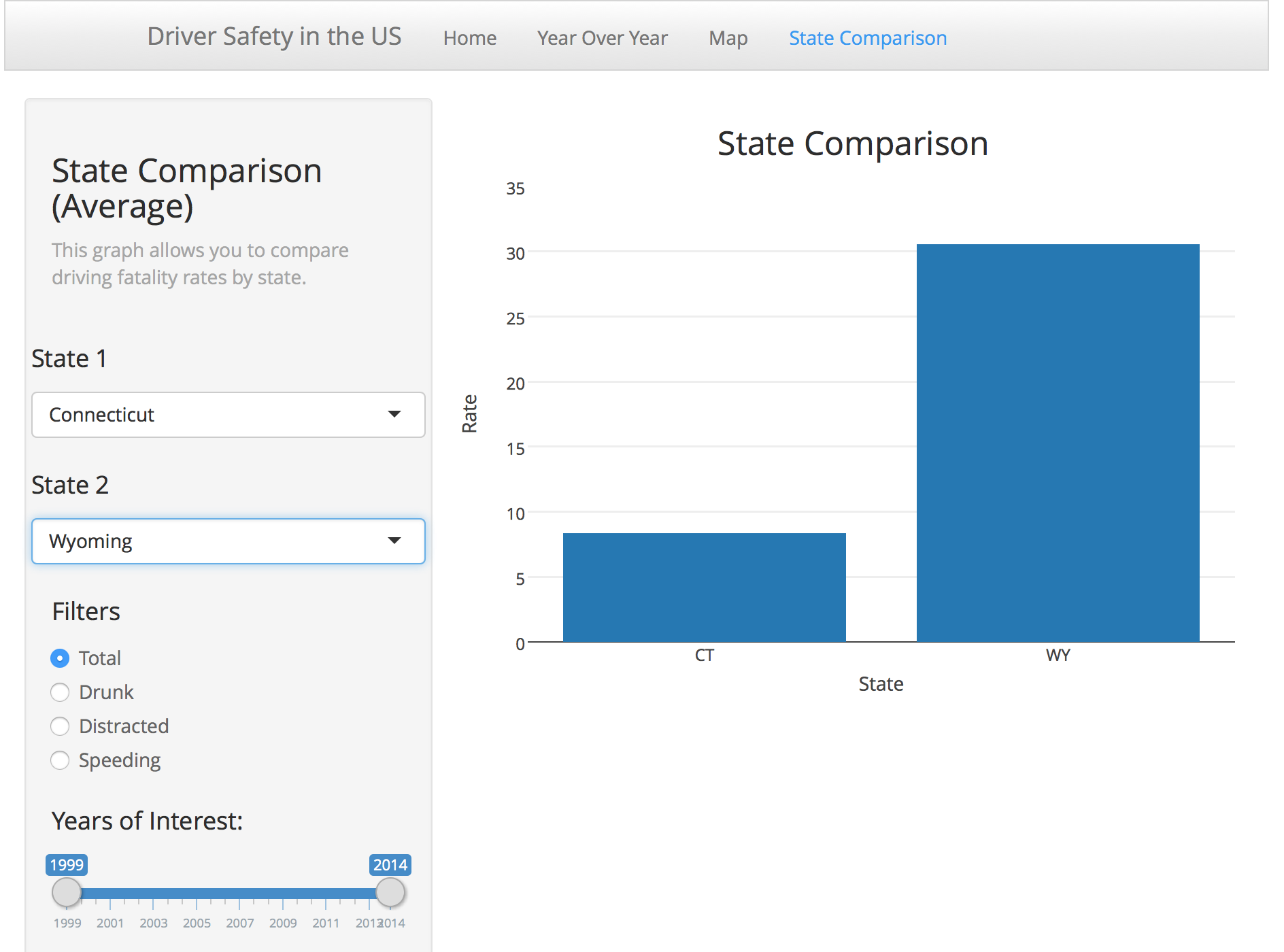 Finally, I included a simple tool to allow you to compare states directly based on any rate that you wish to see. In the above example, you can see that my home state of Connecticut has about one fifth of the driving fatality rate that Wyoming has.

Deaths from traffic accidents are clearly a tremendous issue facing the country. There is some hope on the horizon, though, as self-driving cars have the potential to be a huge step forward in terms of safety. The technology is still several years off, though, and have countless regulatory hurdles to pass. It's still unclear how politicians will treat this new technology, however it seems unlikely that a majority of Congress will act quickly to help the technology develop. This will be especially true if we don't start treating this problem with the concern that it deserves.